Remembering my brother through video games

Late last year my brother Sam passed away. He was 29 years old.

Having never experienced a death in the family before it was a confusing time for me. Not only was it this terrible unknown, it also went against the natural order of things. Seeing my parents and grandparents grieve for him was just so wrong. This was made all the worse by it being unforeseen. There was no warning or time to say or do the things we all wish we could have.

As the months have gone by myself and my family have found different ways of dealing with this. Most recently I cycled 1,094 miles between the farthest two points in the UK for charity. It certainly helps to focus on doing something positive. Of course much of this time has also been spent thinking and remembering. It struck me just recently which memories I truly treasure and many of these involve playing video games with him. We used to play some games endlessly. Countless hours were spent trying to just get that little bit further this time, often to the annoyance of our parents who would be telling us to turn the console off as it's dinner or bed time. We craved the challenge video games presented us and this was where we really bonded as brothers. 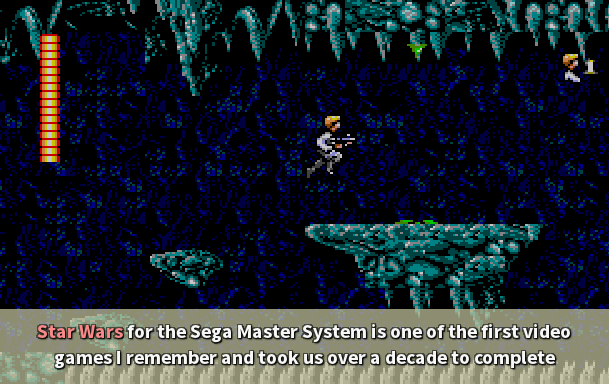 Our first exposure to video games was in the early '90s when my parents bought a second-hand Sega Master System. This had Sonic the Hedgehog pre-loaded into the console and was an instant hit with our family. There would be rare and exciting trips to our local shop for new games but still our games library remained limited. We would play the same few games over and over and over, and this made us learn these games inside out and really appreciate them to the fullest.

But as well as that it also taught us to work together. We didn't have the luxury of swapping to another game when things got tough. We had to stick with it and teamwork was the only way we were going to succeed. Even when you didn't have the controller in your hand you'd be warning whoever was playing of upcoming enemies or obstacles, or reminding them of items they needed to collect or paths they should follow. It was a great way to play as you always felt involved. You were always part of the team and there were never arguments over whose turn it was with the controller. 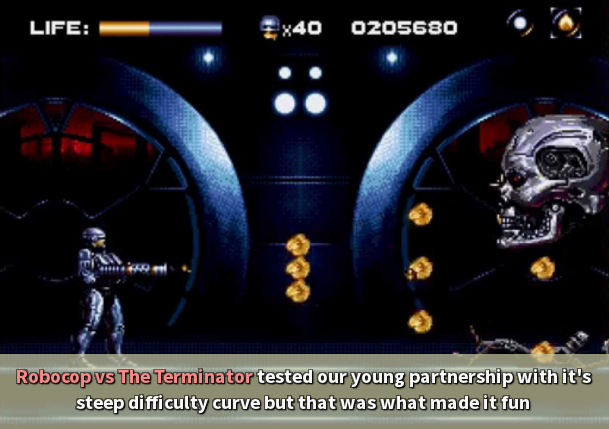 This was taken to a new level with the arrival of Sonic the Hedgehog 2. We had never encountered a game where there was cooperative play before and it was a revelation. Now with a newer console, the Sega Mega Drive (Genesis), this incredible new game allowed us to actively help each other in-game. This was mind-blowing to our young brains and became an instant classic for us that we returned to year after year.

Later on in the '90s our parents got us a Playstation. It was truly a marvel. It was not only our first brand new console, it also came bundled with 6 games. We immediately had more games than we had ever had for our previous consoles. We both thought we had an unending source of entertainment and it felt incredible. The next few years saw our relationship with games and each other grow stronger than ever. We would work together to overcome challenges more extraordinary than ever before, whether it was swimming to the ocean floor while fighting off sharks as Lara Croft or jetpacking through space as Crash Bandicoot. 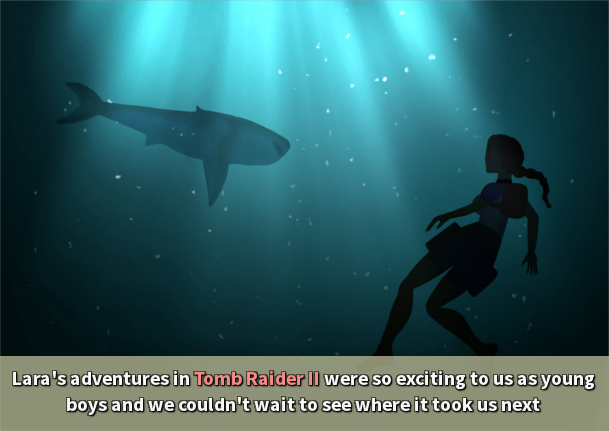 One particularly memorable game was 1999's Dino Crisis. Being that bit older, my brother was more capable with controller in hand while I was happy to take more of a backseat role and keep track of what we needed to do, where we needed to go, and how to solve any puzzles. We had found some success with this setup previously with Tomb Raider II and here it blossomed. Dino Crisis wasn't the first game we had ever completed together but it was the first game where our individual skills had come together so perfectly. 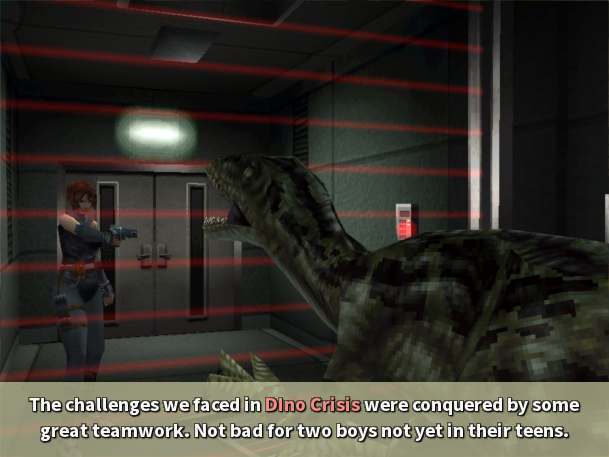 As new consoles came and went we would still regularly go back to our Mega Drive and Playstation libraries because we adored the games so much. And, well, because we were still yet to finish many of the games despite having been playing them for years. Entire decades would pass and our craving for the punishing challenges these games offered us remained, determined as ever to reach the end. Finally completing a game was such a landmark achievement then. I remember being on the edge of my seat when, after years of trying, we reached the final stage of 1993's Star Wars - the Death Star trench run. We had never got this far before and we only had a few lives remaining. My brother took the controller and he smashed it. The nervous adrenaline turned to such pride as we realised the game was over. We had done it.

Even when my brother moved out into a place of his own we would still manage to have regular gaming sessions. He would visit weekly and – despite intentions to avoid sitting in front of a TV – we would almost always spend the entire time playing games, usually some kart racer like Crash Team Racing or Sonic & Sega All Stars so that the whole family could get involved. 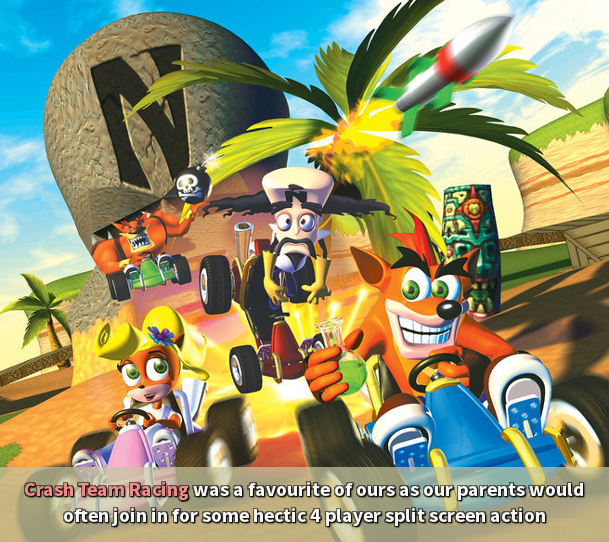 In more recent years other responsibilities pushed these gaming sessions aside, the most significant being the birth of his child. These new responsibilities meant we hadn't managed to play anything for the past few years. I didn't truly appreciate how much I had missed these sessions until very recently. We had achieved so much and had such fun over the years. There had been constant silliness, laughter and joy playing these games. That's why these memories shine so brightly for me.

Having just cycled more than a thousand miles I wanted to not only do something a bit more relaxing but also something more relevant to my brother. My interest in cycling was not shared by my brother. We were very different people that had very different interests, but video games was the mutual ground where we really connected and bonded so closely. 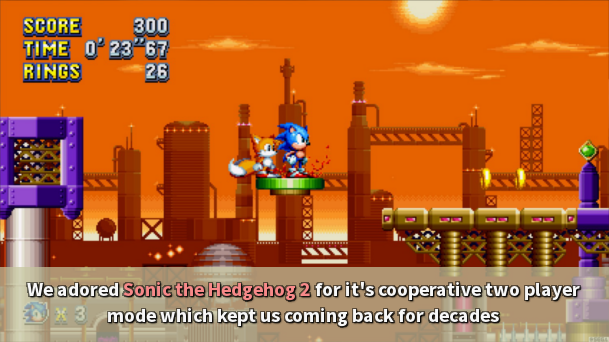 So my idea is to revisit some of the most significant video games from my childhood that I played with my brother and stream them live on Twitch. It's sure to spark some memories. If it can raise some awareness and discussion about epilepsy and perhaps raise some money for charity then that's even better. If you are a fan of the old Sega consoles or the original Playstation you'll be pleased to hear that's where the majority of the games will be from. Crash Bandicoot, Tomb Raider, Sonic the Hedgehog, Theme Hospital, Pandemonium, Toy Commander and Krusty's Fun House are all on the list of games I am going to play through.

If you would like to donate you can do so through my JustGiving charity page:
www.justgiving.com/fundraising/stream4sam

If you have any other need to contact me you can do so by emailing me on:
[email protected]

- Thanks for reading. It's nice to be able to share my story here.

I decided I would revisit the games we used to play together while we were growing up and stream them live on Twitch. We had so many good times playing games together so this should spark some nice memories. If it can raise some awareness and discussion about epilepsy and perhaps raise some money for charity then even better.

As a reader of Destructoid for 8 years or more it was a no brainer so share my story with a community I felt such a connection.

Keep up with stream dates and times:
twitter.com/stream4sam

(all donations are sent directly to EpilepsyAction, a UK registered charity)

Some of the games I intend to play:
(Titles in bold are completed)