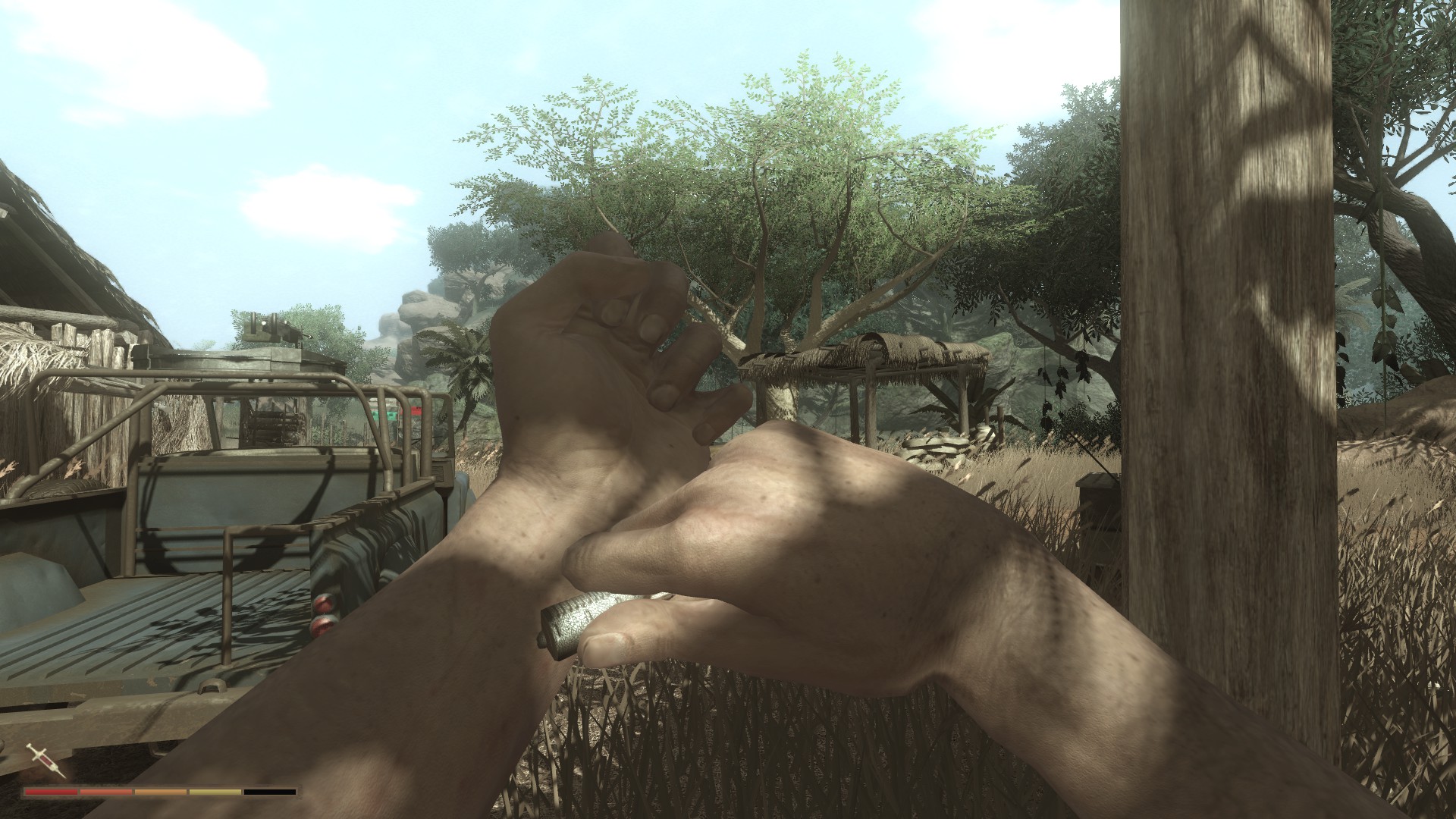 Over the last couple of years, there's been a rash of thinkpieces holding up Far Cry 2 as a high point of open-world game design, and for the life of me I can't figure out why. I only played it recently, so maybe I missed out on a cultural moment back when open world games were still finding their footing. But the glowing praise I've seen in articles and comment sections goes well beyond just establishing the 2008 title as a genre forebear. So without calling out any specific commentator, I'd like to take a moment to explain why Far Cry 2, for all its good ideas, is not the champion you want.

Obviously, the mission variety and range of combat mechanics are not up to the standards of a contemporary Ubisoft romp. No one, so far as I can tell, is saying that the general increase in scope across the series is necessarily a bad thing. (I don't think anyone wants to return to that era's washed-out, brown'n'bloom graphical vogue, either.) Still, among those ranking Far Cry 2 as the peak of the franchise, there are some alarmingly bad arguments for why that's the case, many of them invoking the various ways the game is “diegetic.” For those not familiar with this little literary flourish, it just refers to elements of a work of fiction that are properly within the world. For example, an NPC calling you over a handheld radio might serve as a diegetic alternative to a disembodied voiceover from an unnamed narrator. Typically one would expect the use of diegetic elements to enhance the player's sense of immersion. And there are a fair few cases where Far Cry 2 does this exceptionally well, most notably during the lavish first-person animations and mission debriefings where you're free to move and look around. However, the later installments all retain and expand on this sort of thing, so this can't be the defining factor. What's more, the game is still perfectly comfortable resorting to the usual interface conventions indicating health, ammo, and the like, so it's not as if it passes some imagined diegetic purity test that the rest of the series fails. 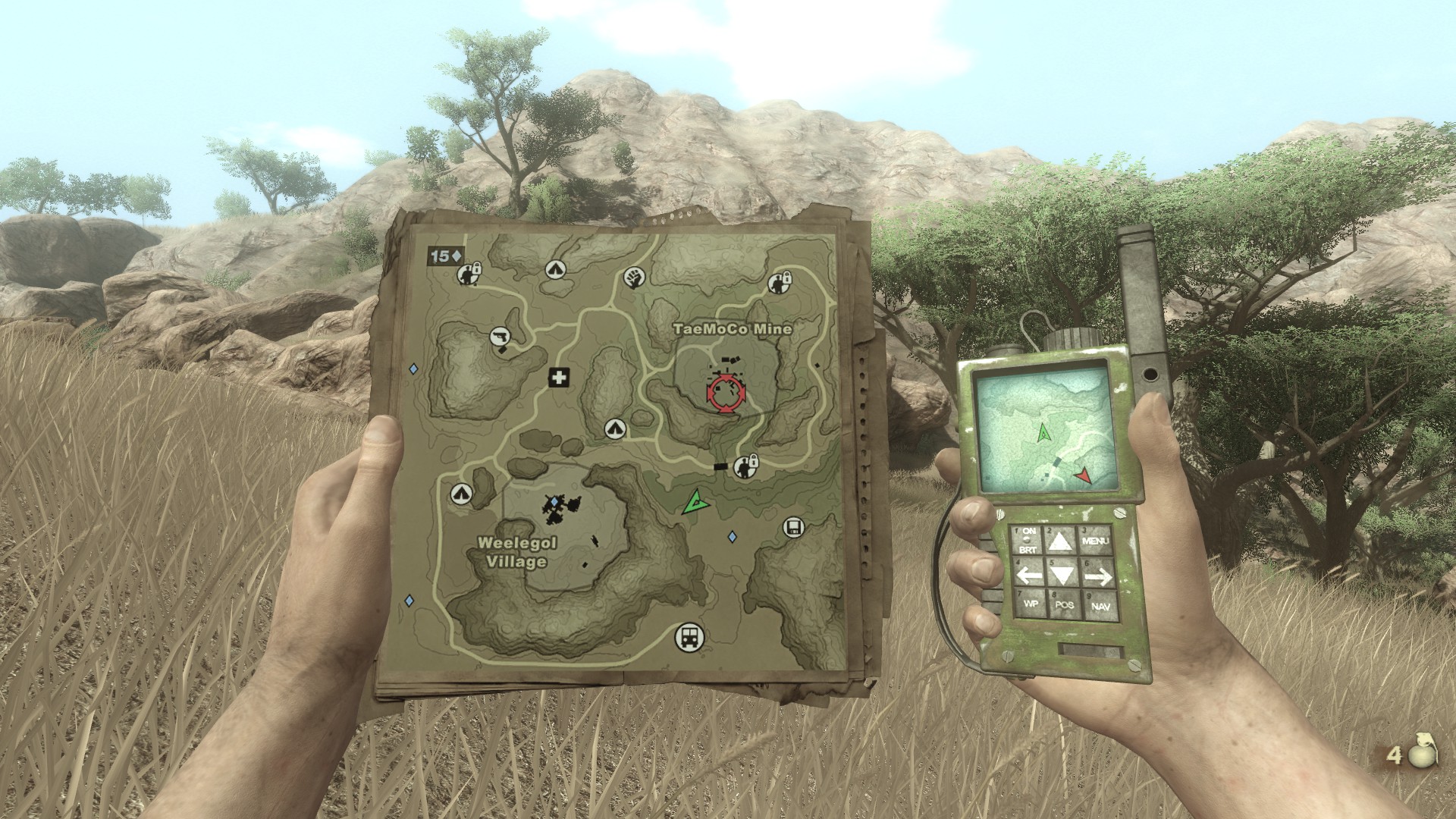 One talking point that invariably comes up is the world map. The old guard absolutely loves that it's a real piece of paper, clutched by a real hand, smack in the middle of the field-of-view. This, they proclaim, is far better than the icon-splattered main map of Far Cry 3 and its corresponding, always-on minimap. There are just too many blinking, color-coded distractions in the recent games, they say. But when you really put it under the microscope, the diegetic argument falls apart here. The Far Cry 2 map has a wandering “you are here” arrow that wouldn't be possible on real-world parchment, along with typical location marker symbols that change as you discover checkpoints or take over safe houses. The only meaningful difference with the later entries is that there is simply more to do. Of course there are more icon types and colors, with higher density, when the game is more content-rich. That's a necessary burden on the UI, but it can hardly be argued that the payoff isn't worth it when the second entry had assassination and convoy destruction as the only variety in its side missions. I suspect that the real problem here is the paralysis of choice that results from the game's tendency to light up too many quests at once. I can appreciate the desire for a more directed, sparse experience in general, and there is a fair bit of fat to trim in Far Cry 3 and onward. But the presentation of the map is only a result of more important prior decisions.

Another item that tends to crop up is the weapon jamming. Because all the enemy guns have been upcycled by the resident warmonger, they tend to fall apart at inopportune times. Pressing reload clears the jam and restores normal function, although a weathered gun still has compromised handling compared to the new counterparts you can get at the gun shop. It's an admirable effort at worldbuilding, especially given the lavish attention given to the animations. Despite the frustration of having to deal with what amounts to a Quick Time Event in the middle of a firefight, it lends a certain kinetic grit to the gunplay. I can begrudgingly appreciate the immersive aspect here if the intent is to toss the player into a danger-fraught environment where even the tools are a bit fickle. The problem, as ever, is in the shortsighted implementation. The only interactivity built into the system is the player's choice to use a busted gun in the first place, and that choice is always wrong. A one-time purchase at the gun shop gets you an infinite number of fresh copies of any given weapon every time you drop by. The obvious solution is to sidestep the rigmarole and just pick up a shiny new kit every time you're anywhere near one of these arms dealers. (Ubisoft also decided to further obviate the mechanic by letting you send extra copies to the ubiquitous safehouses. In my playthrough, I believe I saw four or five gun jamming animations total.) Not only does the system stop short of presenting any meaningful decisions to the player, but it actively works against the typical Halo-style conceit where a highly limited weapon carry capacity is supposed to make you more improvisational. There's no way I'm adapting on the fly by trading up to that freshly-dropped grenade launcher if it's just going to stop firing two rounds later. 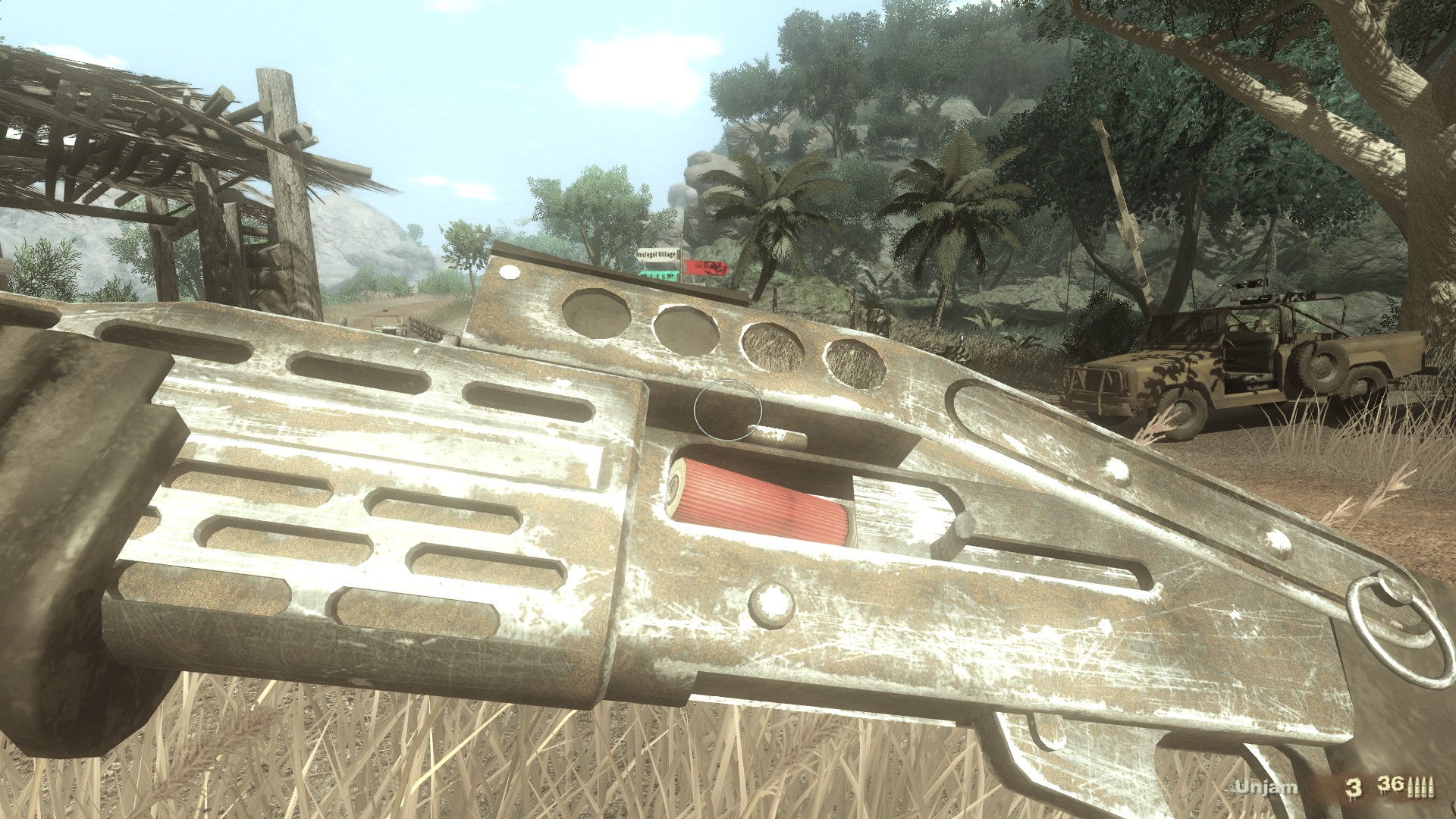 Malaria is a different instance of the same game design syndrome. A not-very-diegetic blinking orange pill bottle pops up in the bottom left corner of the screen, replacing the normal healthpack keybind. Your vision blurs. Should you choose to accept the prompt, your manly arms perform a long animation in which you dump a few capsules into your gob, and the problems go away temporarily. There's the potential for the symptoms to get more severe if you ignore them, but I never got to that stage, because I did the missions that award additional pills. The game is hopelessly vague about how all this works, but from what I can gather, you only begin to run out of your undefined amount of malaria meds if certain special missions are available and have remained uncompleted for a while. Like the gun degradation mechanics, there are no real choices here. Replace the guns, replace the pills. You don't have to spend any scarce resources, you don't have to weigh the opportunity cost of one debuff versus another. Far Cry 2 softballs the player with minor annoyances, and then rewards you by switching off its core subsystems.

Far Cry 2's currency choice of uncut diamonds is an accidental metaphor for its lack of polish. The bullet points sound like the best hardcore survival-shooter one could ask for, but there's precious little behind the flashy visuals. It feels as though technical and development limitations hemmed in concepts that were much bigger in the early stages. If having a mint-in-box new assault rifle had come with a proportional price tag, or older weapons had had meaningful crafting and maintenance mechanics, I'd be all for the more realistic approach. But that simply does not happen in the game that actually released. In Far Cry 3 and onward, for example, they flipped the malaria ailment into a system of buff-filled syringes with dedicated resources and stat specializations. Sure, you give up on a bit of the oppressive feel, but you gain so much mechanically that it should be obvious why Ubisoft made that bargain. For some of Far Cry 2's undercooked systems, Ubisoft chose to revise and reinvigorate them in future installments. For others, they've left them alone in order to focus on other things. I would welcome a scroungy return to the series' roots, but it would need the sort of precise mechanical attention that has gone into evolving the series thus far. Outside of the barest of basic ideas, Far Cry 2 is not the right template going forward.