I’m too much of a snob to really touch free-to-play games. Okay, that’s not entirely true. I’m totally a snob, but the main reason is that the type of games that use the model don’t often appeal to me. On the occasions that I do decide to try one out, the dalliance rarely lasts more than a week or so. Case in point: War Thunder.

A long time ago, I used to play Microsoft Combat Flight Simulator 2 on my old Windows ME machine. Set in the Pacific Theatre of World War II, it was an appropriately realistic take on the subject matter. If you wanted it to be, anyway. You could custom tune the difficulty so that it was more action based, if you felt like it. I started off on something simpler, but as time went by, I got a taste for the realistic stuff. By the time I stopped playing, I knew more about WWII fighter planes than any pre-adolescent should.

War Thunder is basically that: it’s a flight simulator that can be more action or simulator depending on your tastes. At least, that’s what it was when I played it. Now you can drive a tank and similar ground vehicles instead, but they weren’t available during the period that I played.

It didn’t cost me a dime, so that was nice, but I only played for about a week. It was an enjoyable enough experience, but I’m just not a very competitive person, so this kind of multiplayer doesn’t stick with me.

I did make some pretty sick landings, though.

EASY TO EVADE, DIFFICULT TO DOWN

Let’s be honest here, I wasn’t particularly good at War Thunder. I wasn’t terrible, either, but I was no match for anyone who knew what they were doing. I don’t know enough about aerodynamics or maneuvering, I have difficulty judging distance in games like this, and I didn’t put in enough time to improve. Yet, while I was often relegated to the middle of the scoreboard, I was difficult to shoot down.

Again, I’m not claiming to have any special skill, if anything it was mostly luck. Whenever my plane was peppered, I was often fortunate enough not to have had something critical deconstructed by heavy ordinance.

Take, for example, the time that I limped away from heavy combat, rapidly draining fuel from a puncture in the line. Before long, the engine gave its last sputter, and I was left listening to the wind whistle over the holes in my wings and fuselage. It was a long way back to base, but the battle was fortunately at a high enough altitude that I had plenty of room to glide. However, it was when I reached the runway that I noticed that one of my landing gear had been shot clean off, leaving me with a lopsided plane.

Landing on one gear is a dangerous proposition, since you risk rolling the plane onto its canopy. If I could retract it, a belly landing would be possible, but the plane I was flying had fixed gear. The only option I could see at that moment was to quickly roll my plane at ground level to try and smash the wheel off and allow a belly landing.

Did it work? Heck yes, it did. 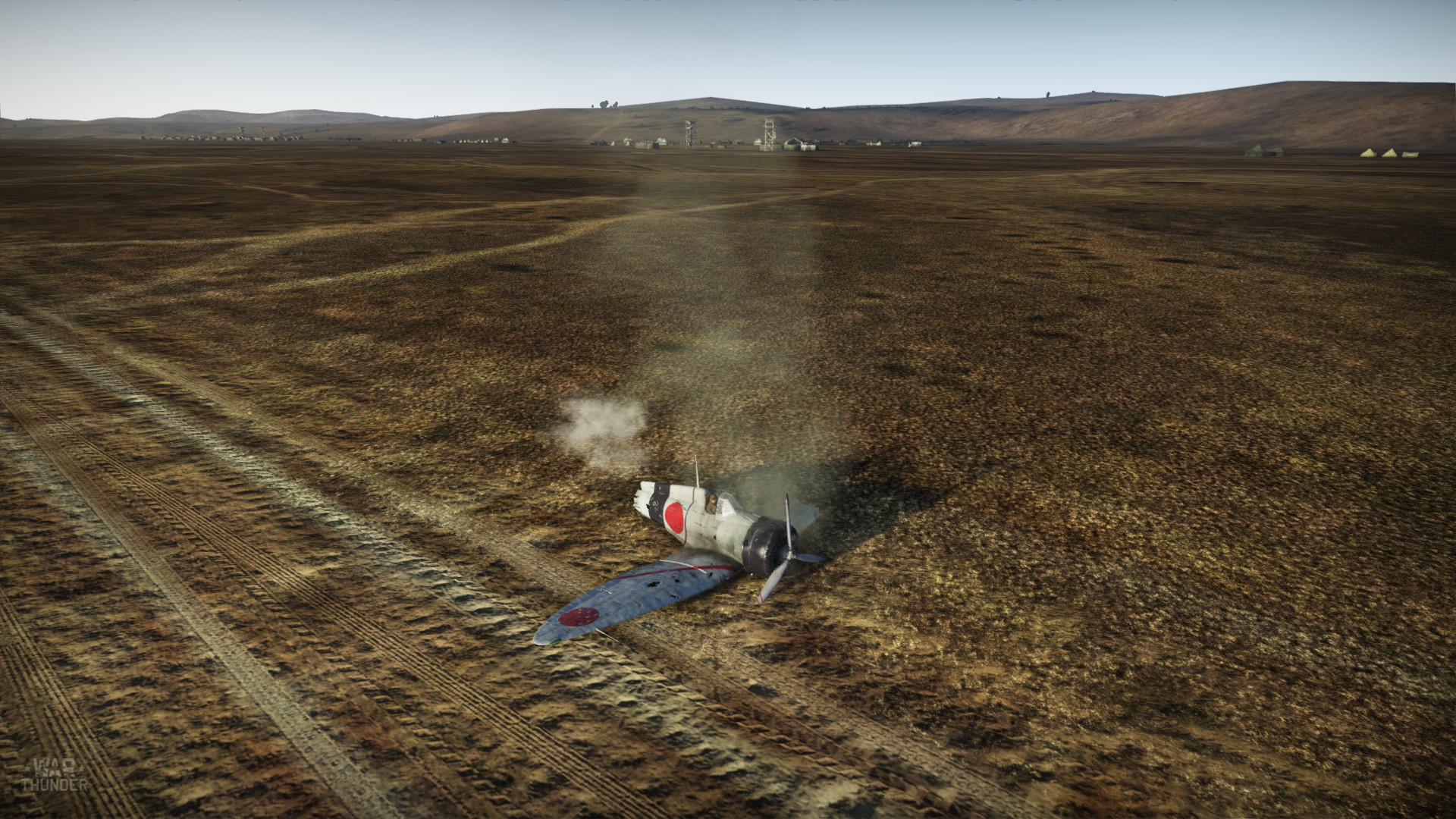 Fill 'er up, boys. We need to get this bird back in the air.

Microsoft Flight Simulator 2 instilled in me a love for the Zero, Japan’s ubiquitous naval fighter. I loved its canons and maneuverability, and it worked well with my poor understanding of aerodynamics. So, for my time with War Thunder, I stuck to the Japanese side of combat, pushing my way to unlock my beloved Reisen.

This meant that I’d often have to land on aircraft carriers, which is no easy feat.

If you’re unfamiliar, an aircraft carrier has a lot less surface area than a land-based runway. To make up for this, naval aircraft have a hook near their tail that is used to grab onto a cable laid across one end of the carrier, which abbreviates the distance the aircraft needs to stop.

This takes a lot of precision, which can make things difficult when, say, you can see daylight through the wing of your plane. So what do you do when your plane is in no shape to circle around and make another pass? My solution to this was elegant, subtle, and graceful: I’d clip my wing against the command tower.

Does it work? Heck yes, it does. 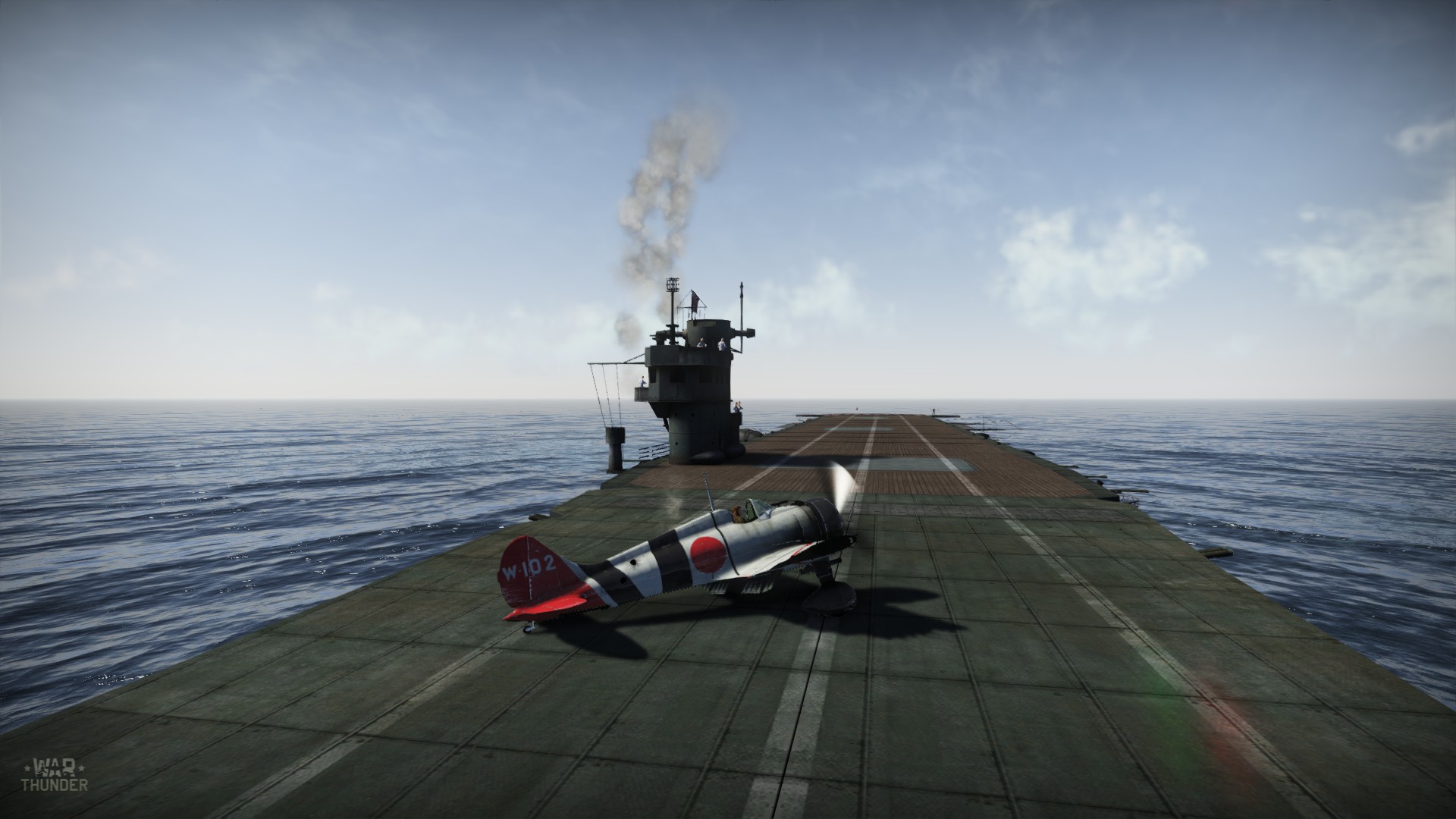 That is exactly the correct angle for a plane to land.

Screw the naysayers, the mechanics, and your commanding officers. Bashing that bird is the best way to stop, hands down. Just take a look at another crackerjack landing: 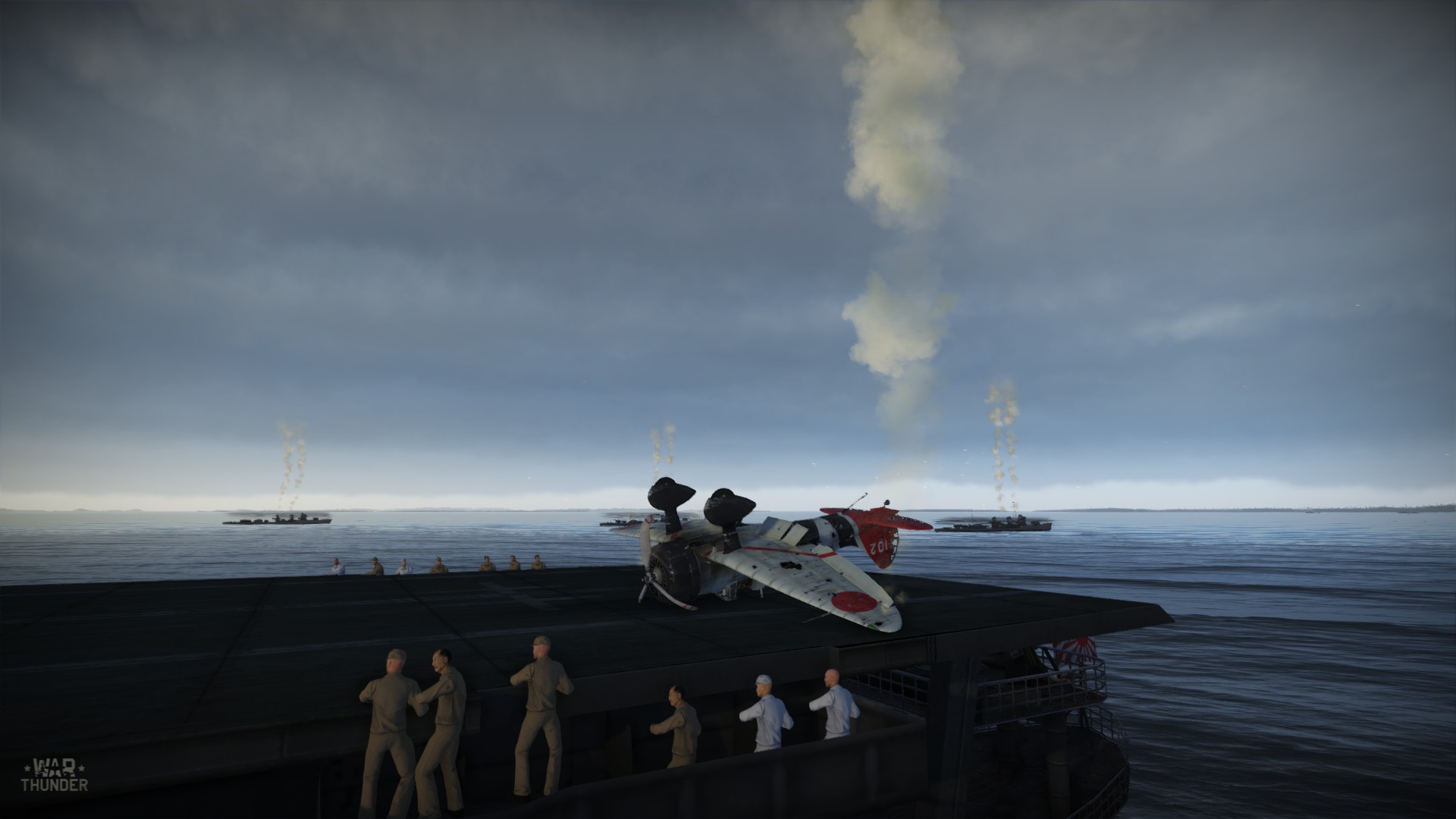 I’d probably play War Thunder again if I got the flight sim itch, or even if I got some new joystick that I wanted to try out. Pretty sure I still wouldn’t spend any money, but you never know.

I don’t necessarily have anything against free-to-play model for games, they just don’t do much to attract me. Most of them are competitive multi-player games, and that’s just not my scene. The whole Facebook migration that had major developers jumping aboard the Farmville bandwagon also helped sour any potential taste I could have gained for them.

On the occasions that I do get into a free-to-play game, it’s usually usually only for a short jaunt. Games that survive longer than that tend to be single-player focused and can be bought outright, like Super Mario Run or Steel Diver: Sub Wars, though even then, it's not a much longer commitment. If I had to guess why I prefer to buy F2P games outright, it’s likely because I feel more attached to a game that I’ve plopped down funds to own. It has a better chance at getting attention if I’ve already invested in it. But it’s not a hard rule that I live by, so maybe one day I’ll finally become engrossed in a free-to-play.