If I took the time to think about it, I’ve probably got more guilty pleasures in video games than I like to admit, but my biggest one is unquestionably 3DO’s Army Men series. Toy soldiers were a fixture of my childhood, starting with a Toy Story brand Bucket O’ Soldiers that I got around the release of the first movie. Despite the reality that most of the games are crap, the Army Men series gives me the opportunity to take part in all those diminutive battles that I’d assembled in my younger years.

Back in the series’ heyday, I owned an N64. I had access to a Playstation through a close friend, but still missed out on the Playstation exclusive Army Men games, such as the World War titles, so my former experience with them is relegated to magazine advertisements. Four titles were labeled with the World War subtitle (plus an unrelated PC entry), but each time appended yet another title. To me at the time, they looked like expansion packs, and with names like Team Assault and Land Sea Air, I once believed they were multiplayer focused.

I actually really enjoyed the first Army Men: World War, which I found somewhat surprising. I always felt that what drew me to the Army Men series was the enlarged, real world locations that transplant the battlefield to familiar places, like kitchen counters. World War proved that I'm always up for some dumb fun with the little plastic men, regardless of locale. The second game in the sub-series, Army Men: World War: Land Sea Air, on the other hand, merely proves just how badly you can screw up, even when trying to build a game off an established framework. 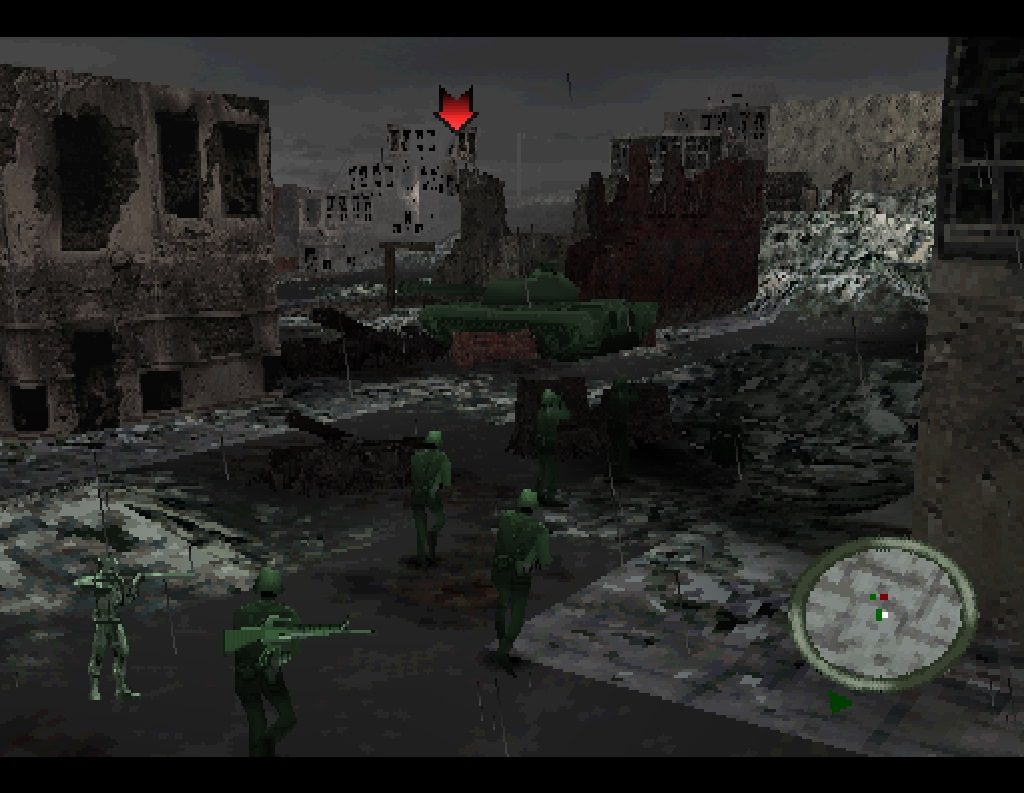 Pictured: The ruined remains of my faith in this series.

BACK TO THE FRONT

On the surface, Land Sea Air will be intimately familiar to anyone who played the first World War. The song remains the same: you're a green plastic soldier locked in an eternal race war with the opposing Tan Army. As the subtitle (the first one) implies, the set pieces carry the distinct appearance of the Second World War, but the toy soldiers still carry the Vietnam War era hardware that they’re commonly associated with. It’s a delightful anachronism that helps the game feel exactly like playtime with toy soldiers after an afternoon of watching Saving Private Ryan.

Mechanically, Land Sea Air isn’t much of a divergence from the first game. The amended title references the only truly unique addition to the game, which is the occasional mission where you get behind the armaments of a variety of vehicles. There are five campaigns of three missions each, and you’re guaranteed at least one vehicle mission per campaign. Lucky you.

I'M DONE FOR, GO ON WITHOUT ME

There’s a decent variety of missions and operations, but many of the settings and assets are ripped directly from the previous World War. That’s not to say that everything is recycled, but a lot of it is. Yet despite everything that was lifted from its predecessor, Land Sea Air feels like it was crafted by the bitter hand of malicious intent. I’ve played many of the maligned Army Men titles, and this one now holds the title of having the most swears hurled at it. The whole affair feels like it hasn't been playtested, because I can't imagine anyone playing it and not asking the director to be less of a dick.

It starts humbly enough, throwing a stiff but reasonable opposition at the player, but it all goes south starting with the fifth level, which involves manning a pair of gun turrets to defend a bomber from enemy fighters. Someone calls out what direction you're about to be attacked from (11 o'clock, 6 o'clock, etc.), and you have to gun down the fighters as they come at you. It certainly sounds reasonable enough, but it demands perfection that can only be achieved by playing it a few dozen times to learn where and how the enemies appear. The fighters that assault your craft spawn at very close range and begin firing almost immediately, so failing to down them within an unreasonably brief amount of time results in taking damage. The mission goes on for a long time, so even if you've shot down every incoming fighter as they come into view, the small amounts of damage you take over the course of the mission builds up until you're sent earthbound in a ball of fire. By the time I was finally able to survive, I had memorized where the enemies spawn from, down to the angle I had to aim at and still barely managed to squeak by.

I'd thought that, perhaps, this would be a one-off stumble and that the game would get back on track, but the requirement for perfection carries into every facet of the game. In the very next campaign, I was placed in a tank, and I'd never been so miserable to find myself in one of those iron (or plastic, whatever) behemoths. You man the guns as the machine automatically totters through the ruins of the city, and your job is to simply ensure that anti-tank crews don't anti your tank. The biggest threat is, of course, other tanks, which are made deadlier by the fact that they have prior knowledge of where you are and don't miss their shots. So the moment they roll into view, they're primed to fire, and they don't give much of a chance to prevent damage. The whole mission has absolutely no mercy and will continue rolling in new tanks until the very last second, just to ensure that you don't make it. Again, success becomes dependent on memorization, so you’ll see the melting hulk of your tank on numerous occasions. 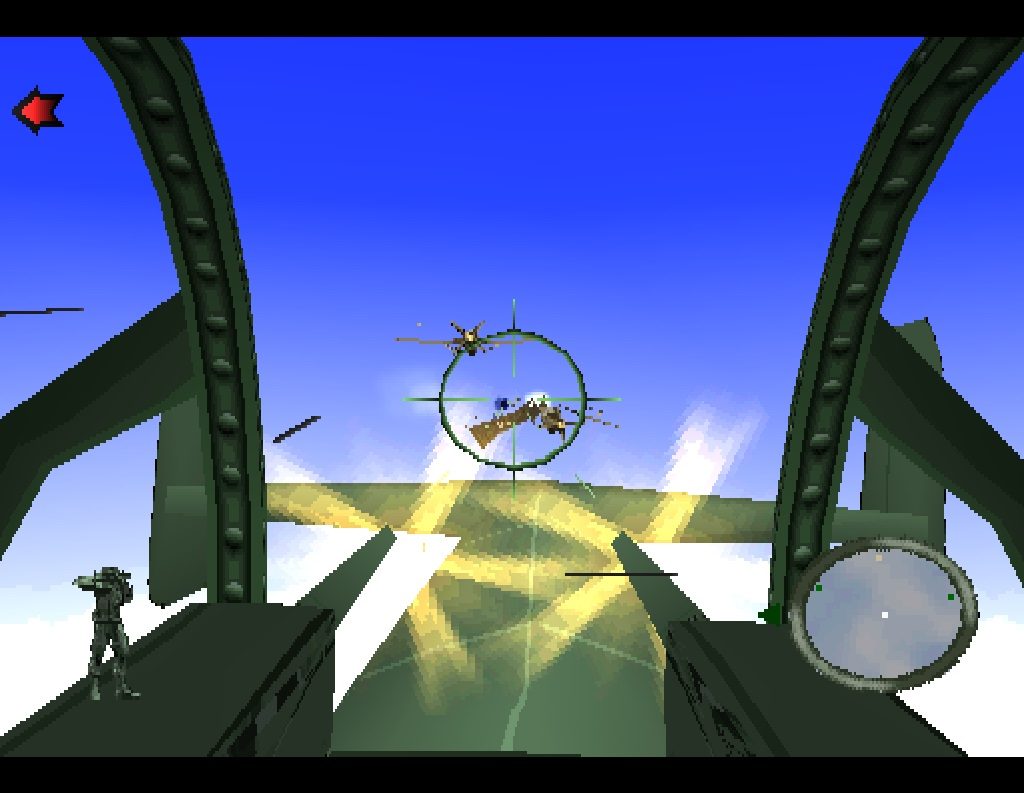 This looks like a lot more fun than it is.

THE MOLES ARE ANGRY

Don’t let me lead you to believe that these problems only exist on the new vehicle missions. The enemy AI in the infantry sections have similarly had their senses heightened and their equipment upgraded. At all times, your plastic man is one machine gun burst away from an embarrassing death. This was also true in Army Men 3D, but in that game the machine guns were hampered by poor range. The enemies in Land Sea Air can hit you from the other side of infinity without difficulty, and if they're alerted to your position, they never lose track of it. It doesn't matter what cover you put between them and you, nor does it matter whether or not you're prone or standing, they will hit you. They don't miss!

This turns the gameplay into an irritating game of Whack-a-mole where the moles fight back and have bigger mallets. On foot, you once again have to memorize enemy positions and find out how best to counter them as they spawn, devolving the gameplay into finding the locations where you can't be hit but where you can target the enemy; essentially cheating the rudimentary AI.

It's maddening, especially because the Army Men series general janky-ness is on display here. I had one situation where I needed to take out a machine gunner who had run onto the battlefield and parked himself behind a tree. He sat there, continuously firing bursts at point blank into its trunk, precisely trained on my position, which meant the moment I exposed one inch of my green plastic butt, it was going to be shot directly off. So I gingerly tried repositioning so I could get to a place where I could hit the dude, when suddenly the tree’s hit detection spontaneously failed, allowing his bullets to phase through and perforate my plastic hide. My memories of what happened next are fuzzy, but when I awoke, I was miles from home and had the taste of blood in my mouth.

In the course of a little over 5 years, 3DO vomited well over 20 Army Men titles into the bewildered mouth of the gaming market. The series quickly became maligned, and the reception towards new titles became so sour that some publications stopped running reviews of them. I, personally, have played through more Army Men titles than you probably knew even existed; you should pity me. There are actually a few that belong on my list of “worst games I’ve ever played.” Army Men: Sarge’s Heroes 2 has tortured me across a multitude of different platforms, each in their own unique way. Army Men: Soldiers of Misfortune included an immensely frustrating airplane section that nearly brought me to tears. But no title in the series has been as aggressively painful as Land Sea Air.

It requires an unattainable level of clairvoyance, forcing players to rely on repetition and memorization just to make progress. The AI is as daft as a ham sandwich, but provided with advantages that make combat an catastrophically frustrating mess. It is an absolute relief to just reach the end of a single stage, and by the time I finally completed Land Sea Air’s colossally inept climax, I was ready to snap the disk in twain.

And to top it off, it's a huge disappointment. I actually liked its predecessor, Army Men: World War, in spite of some reservations. I had high hopes for the World War sub-series, secretly wishing it to be a bastion of security in the polluted mire of the Army Men series, but it turned out that it's just another minefield in a franchise that is just as likely to entertain you as it is to torture you.