He who follows me on Destructoid shall not know contentment or joy – but he will know my displeasure with RTS developers. Too often do they overlook lessons that should have been learned from Warhammer 40K; foolishly do they close their eyes to the shining example of Company of Heroes. But here come Destructive Creations, a Polish game studio, unsullied by the touch of old-school strategy. These men and women of ambition, mostly known for the daily American life simulator Hatred, giveth onto us Ancestors Legacy, the game that embodies the spirit of Dawn of War more than any of its sequels. 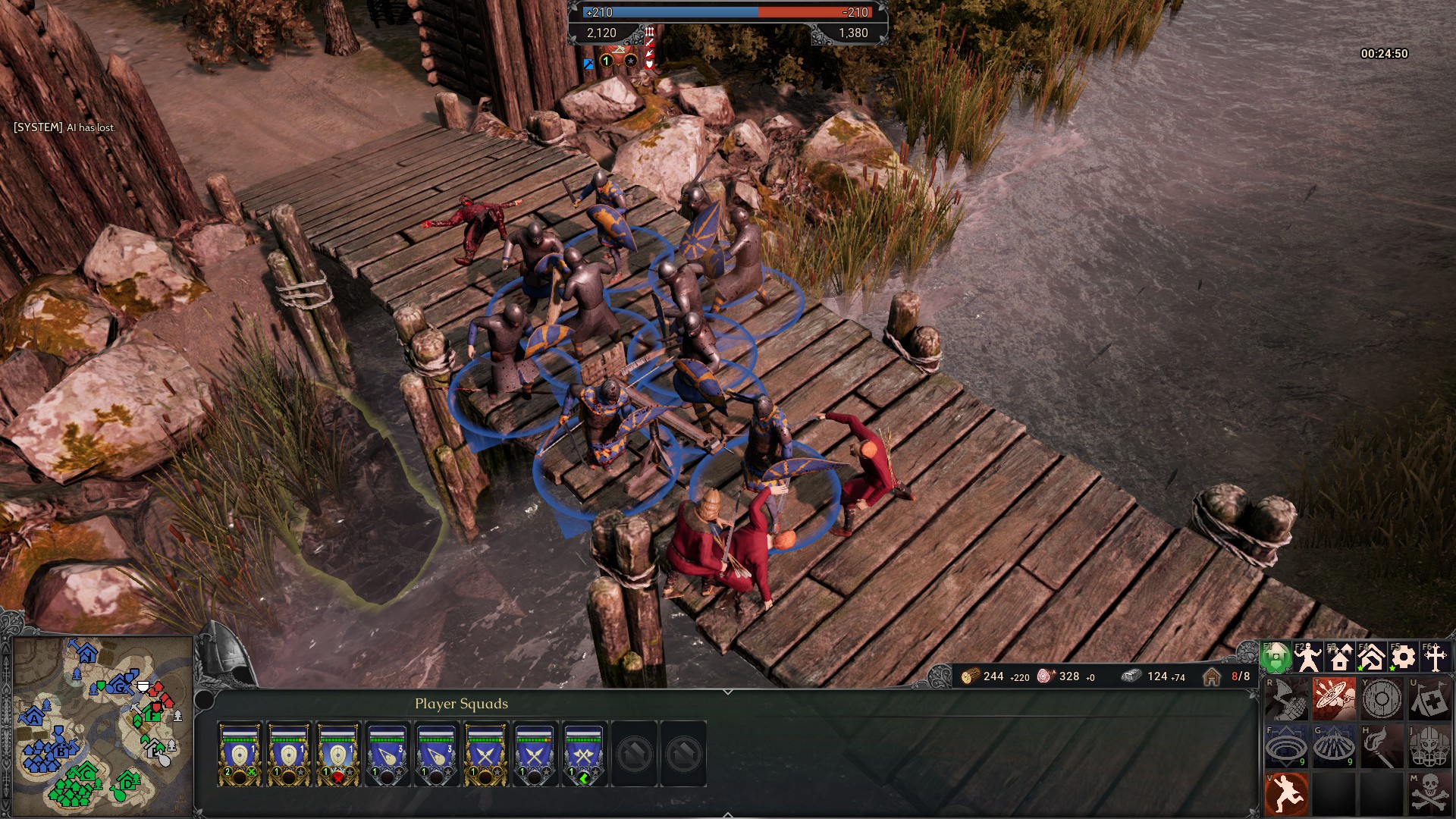 Kill the peasant. Burn the Saxon. Purge the ballista operator.

However, the action of AL does not take place in the grim darkness of the far future. Instead, it whisks us back to the Dark Ages (shut up, I know we don't call it like that anymore). From the earliest campaign set during the raid on Lindisfarne abbey – considered to mark the beginning of the Viking age – to the Holy Roman Empire shenanigans set in the 1200s, it's a great Medieval skirmish game. With each of the four nations having – or promised to have – two five-mission campaigns, you'll certainly get your fill of hardcore violence. The missions themselves follow heroes that are history-adjacent rather that strictly historical, fictional types that could have plausibly injected themselves into the great adventures of days passed. The mission themselves offer a lot of variety, from straight up map conquest to infiltration and sneaking about with but a single heroic soldier.

But whatever happens, Ancestors Legacy is a game very much focused on combat. You don't gather resources; rather, you take over villages by burning down and capturing their warehouses. Each village controls up to three resource nodes. All of them can be manned with but a single press of the button. You don't need to be distracted by base development, either. The buildings will be erected at predetermined locations, just give the word. You even start with with all the defensive structures built! Just train up some troops and raid some stupid peasants. 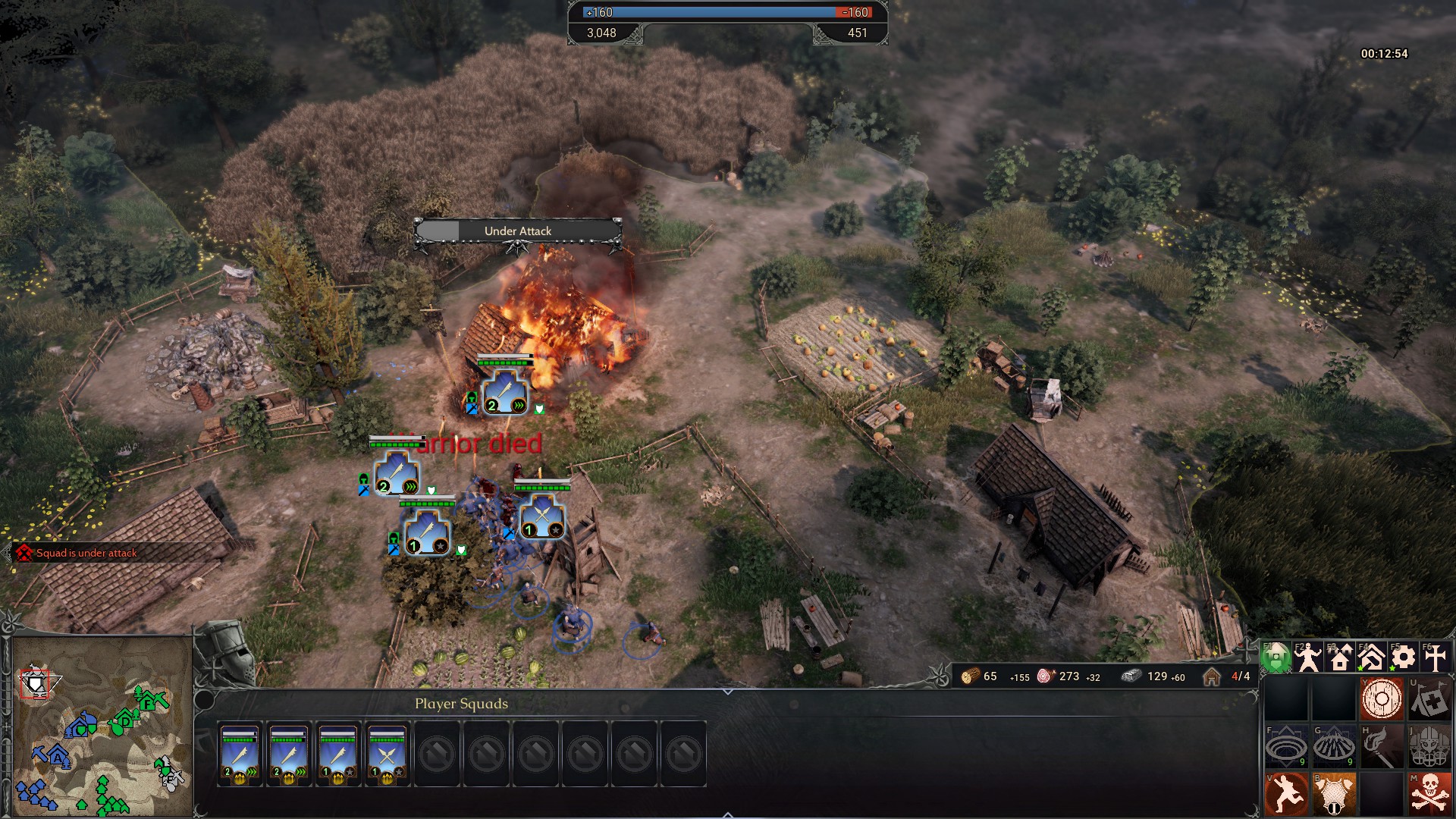 Pictured: some stupid peasants getting raided.

Now, when it comes to having a warband in this game – with 10 units maximum per player, it's a much more fitting name than 'army' – you get to choose from several types of infantry. Your swordsmen are notable because of their shields, which makes them less susceptible to ranged fire or to spearmen. Meanwhile, troops with two handed axes will chop their way through shielded dudes - yet they will have difficulty against spears and arrows. You can already see a pattern of rock-paper-scissors balancing emerging.

Onto this base model the national characteristics are layered, tweaking the unit stats (like health or morale) and adding abilities both passive and triggerable. For example, Slavic spearmean can be ordered to throw javelins as they charge. Meanwhile, Viking axemen are actually berserkers – which can never retreat, but have a researchable (and activatable) ability that grants them stat boosts. “Sacrificial fervor” is the ability some German units have that buffs them – but also makes them unable to retreat for a time. After all, when a soldier commends his soul to God, he can hardly abandon his wows! 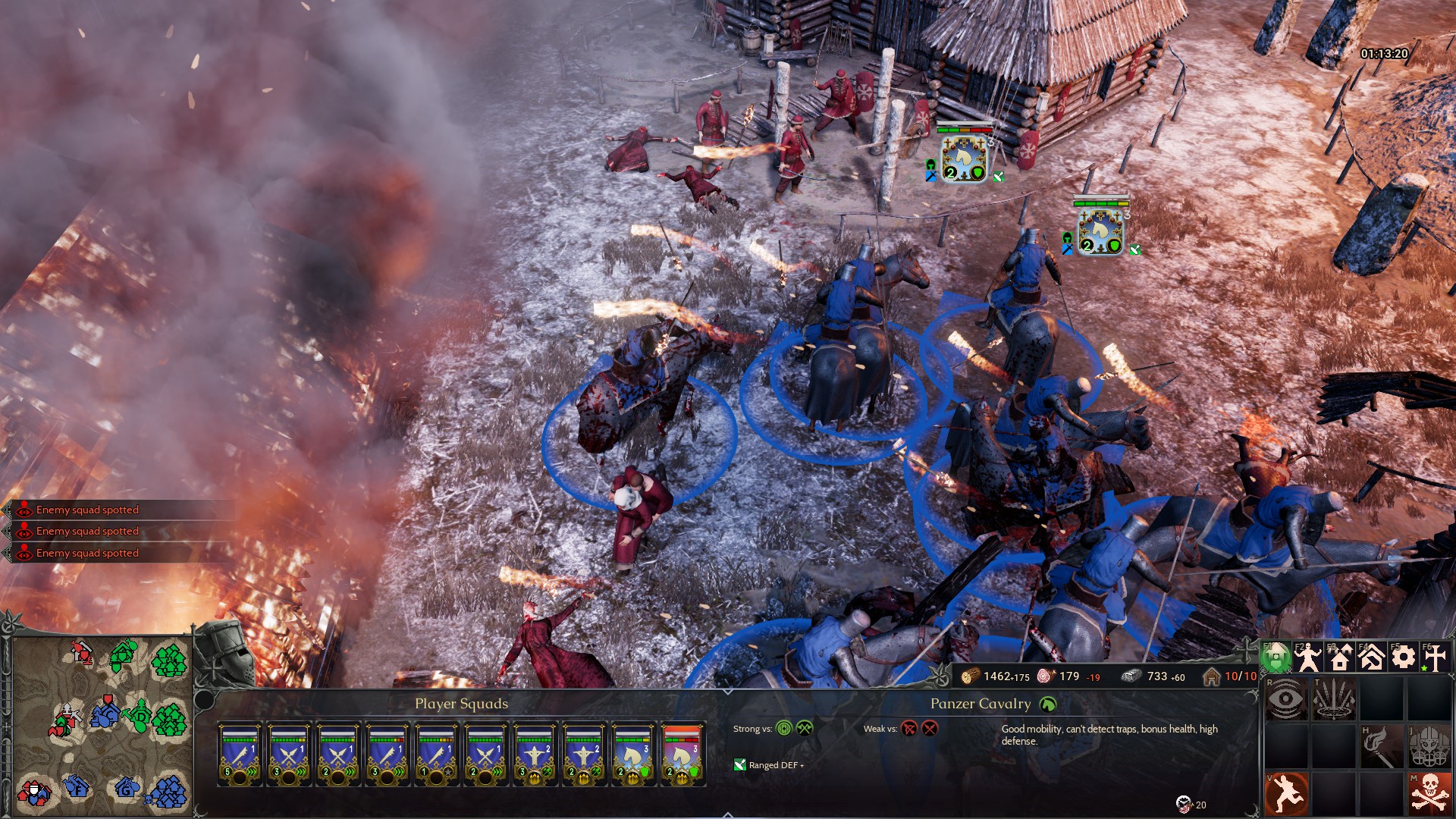 Yet this balancing act causes some issues in the skirmish (SP or MP) battles. Each nation starts with only one unit type unlocked and that is what they have to rely on for the early part of the match. Vikings begin with spearmen (actually, all spearmen in the game use two handed spears and no shields, but it's too early a period for pikemen) while Anglo-Saxons have their slingers. Ranged units are quite scary in the game, but spearmen can tank the initial volley and still slaughter the slingers. The Anglo-Saxon will be at a disadvantage when capturing villages, too. The slingers are weedy sorts that don't stand up well against the defensive fire of neutral villages - and certainly not to the ones managed (and upgraded) by a player. But once you push through to tech level II and start fielding your own spearmen....

You still have ways to even the battlefield, though. All troops can build two types of traps – those can only be detected by soldiers in defensive (read: slow) formation. Of the two, the spike pit trap is nastier, instantly killing any enemy soldier that comes in contact. So if you place your slingers beyond a trap, those charging spearmen (or a Slavic shield squad) will be in for a nasty surprise. Hilariously enough, cavalry can't detect traps at all. Meanwhile, spearmen in a defensive formation will maul any charging foes even before the lines are joined, which, combined with their own anemic charge ability, makes them great on defense. 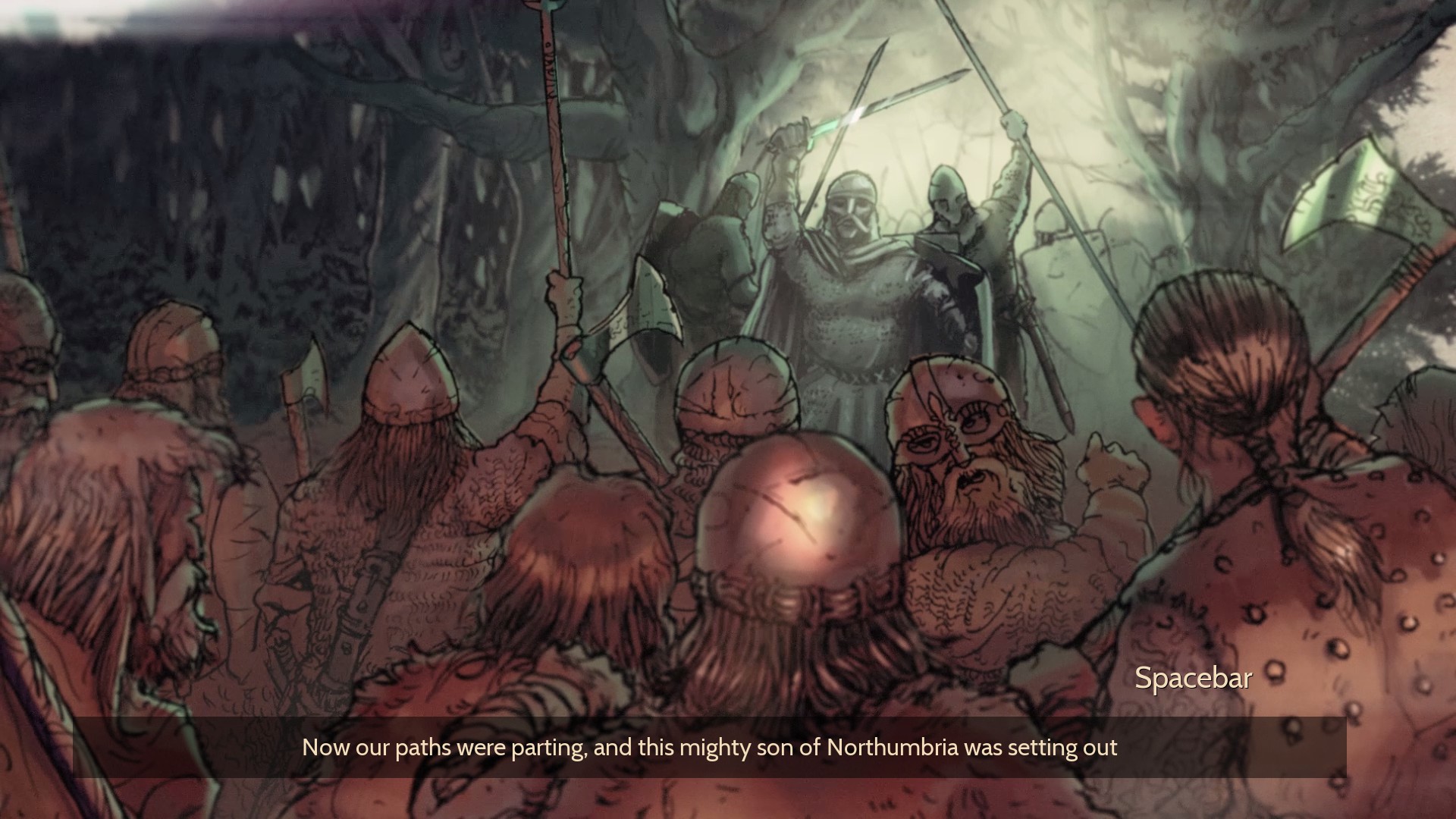 "Olaf, just look at that son of Northumbria!"

Yet they're still not the cat's meow of medieval defenses, since archers exist and Ancestors is a very deadly game in general. Back when I first played the game demo at GamesCom last year (it's important for you to know that I went there), I got the impression that units will be sturdy. What made me really happy was that each unit (...not cavalry, though) had the ability to set up camp and heal wounds. They would become very vulnerable for the whole set up – heal – tear down part, but hey, whatever keeps dudes the kicking. Now, it seems like you have far fewer chances to do so as soldiers die a lot faster.

You still have to care for the morale of your troops – unlike in certain no-longer-in-development Warhammer titles – and that includes more than just retreating once things start going south. Morale impacts battle performance, and you'll see bonuses and penalties appear as icons next to the unit tag both in the field and on the UI. A demoralized unit is always worse at fighting, and it takes longer to replace fallen soldiers than to heal them. So retreat whenever you feel like it. After all, the troops won't automatically retreat to your home base – unlike in CoH - but they can ordered to do so. This allows to, say, tie down a melee with berserkers, retreat, catch your breath, maybe even heal up, and then come back, with flanking bonuses and what not.

But be careful: in real life, most casualties in battle occurred when the retreat (or rout) happened – if your retreating unit runs into an enemy unit in good standing, they'll be cut down like peasants. Oh, and your soldiers will be killing any enemy peasants that dare venture close. Truly these times are dark! 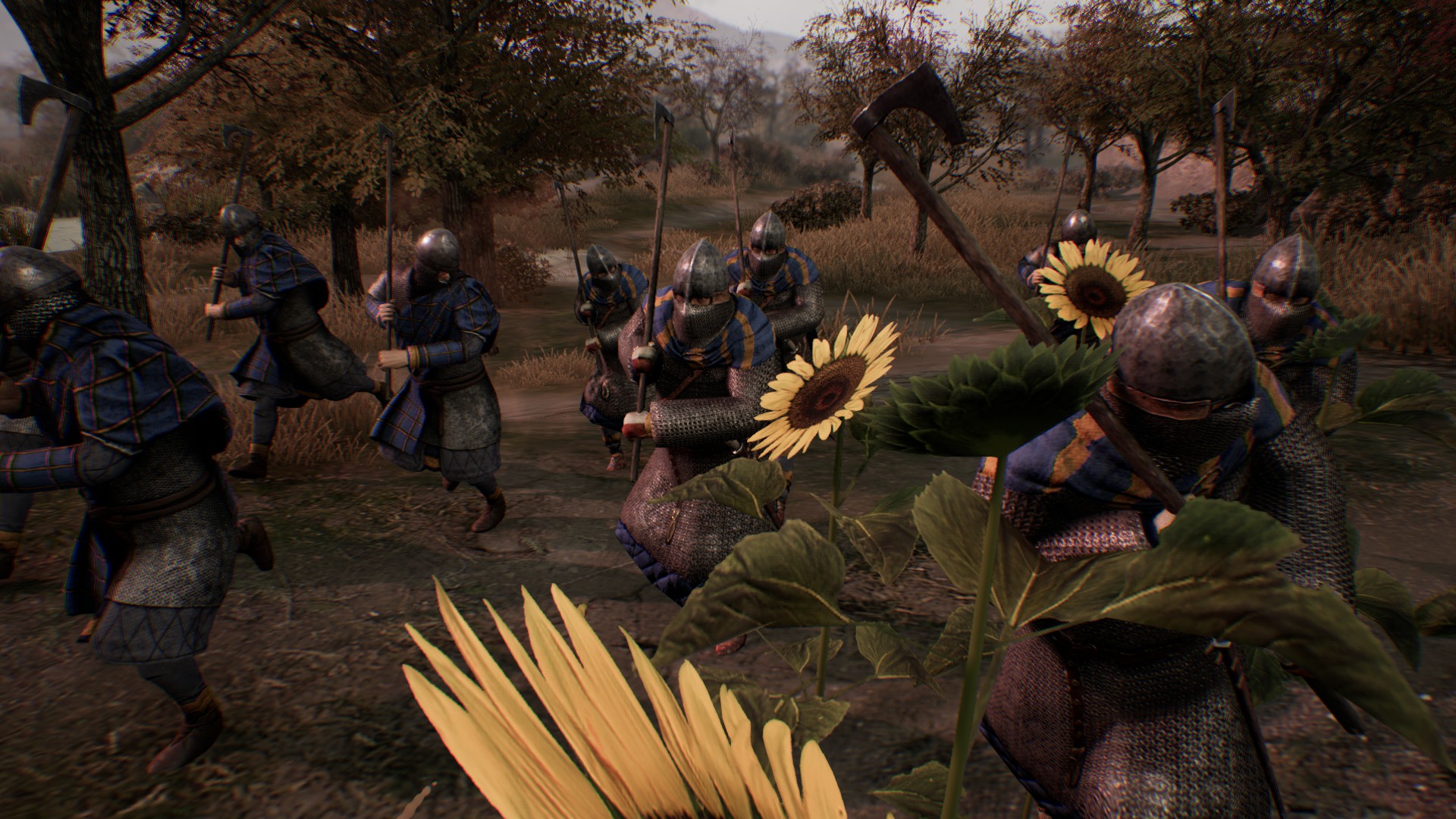 When fully armored, the Huscarls are no longer afraid to take on sunflowers.

But not even the Bayeux tapestry can match the game in beauty. Much like CoH and DoW, AL is a very good looking game. The maps are meticulously built, full of detail you won't have time to drink in. It reminds me of the entering the first open area in Witcher for the first time - it felt ripped straight from an ethnographic museum that encompassed entire villages (we have one of those). And when you finally get to see real castles - as opposed to your makeshift camps and log bases - the effect is astounding.

The units look great, too. Their combat animations are synchronized: each unit type has a set of recorded moves that depend on their opposing enemy. This was pointed out as one of the barriers to easily expanding the game: if you want to included troops armed with two swords, you have to record moves for them fighting spearmen, axe men, shield bearers and so on. You can even zoom in to watch those battles with the in-game cinematic camera! Also, I love it how armor upgrades are reflected on the unit model. Tier 2 armor Huscarls look a helluva lot better that basic ones. And even without the model, you'll be able to tell the unit's armor level by their tag on the battlefield. If there's one thing that the game is lacking, it's the more detailed explanation of what effects are affecting your units, but it's a minor quibble. 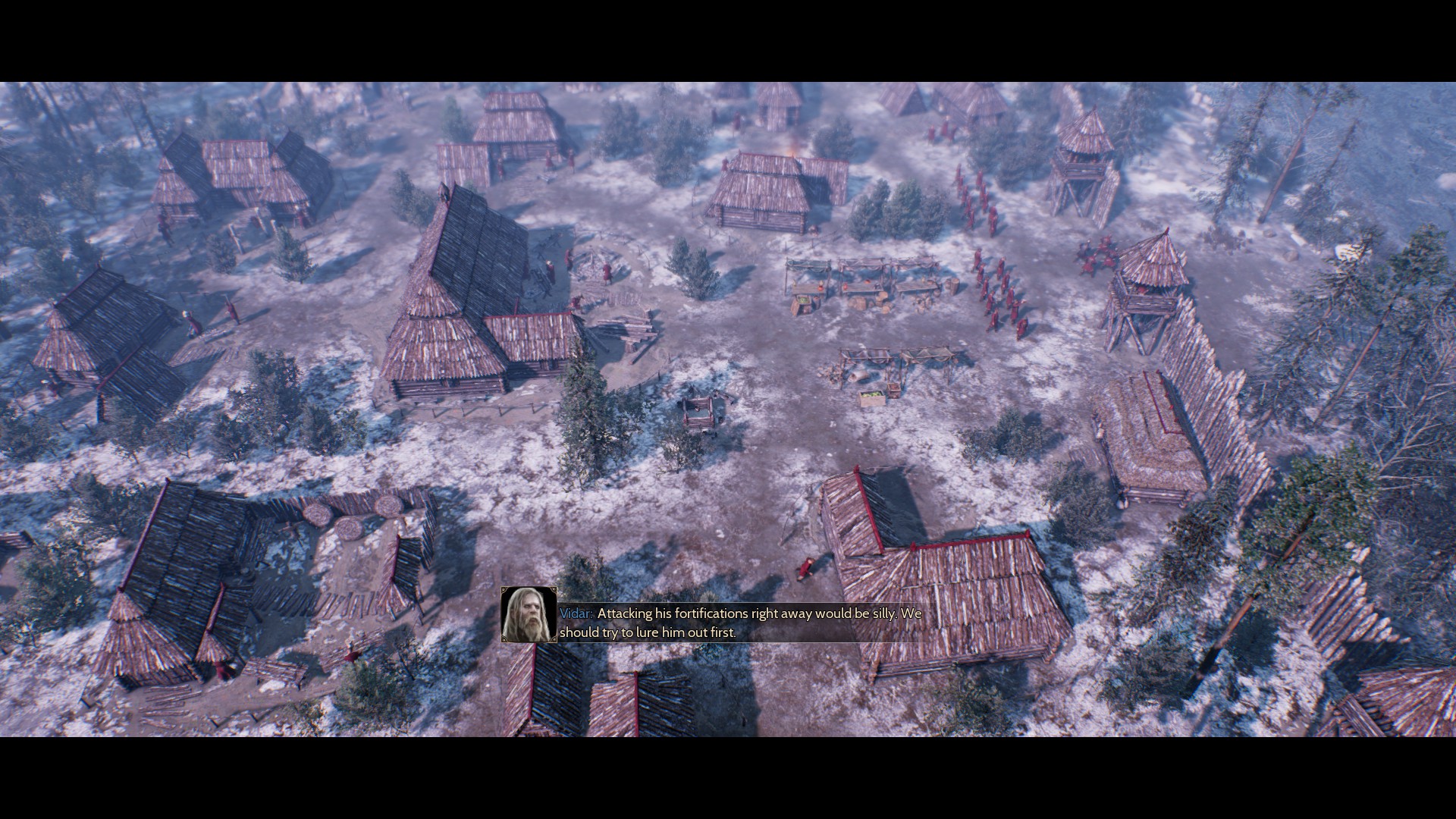 The sound bit lags behind a little, as unit barks are nowhere as memorable as ones we heard in CoH and DoW. Though to be fair, their sequels weren't that great at this either. However, the sounds of battle, as well as music, are top notch.

Ancestors Legacy shows that if we want a good, forward looking RTS game, we we should not place our hopes with SEGA and other gargants of the AAA scene. Fresh blood and people unafraid to make creative choices are what we need. Fittingly enough, those are good qualities for a Viking, too!