If anyone suggested that Sega's newest console would almost launch with a Sega developed and published Tactical RPG, everyone would have thought a new Shining Force game was on the way.

Instead, Sega, ever the intelligent decision-makers, decided to make another unrelated Tactical RPG instead, with Shining Force not being released for a couple of years still.

The resulting game, Blazing Heroes (changed due to copyright reasons from Mystaria: The Realms of Lore), is not a carbon-copy replacement, nor is it of the same caliber. However, it is a solid TRPG with a lot to offer, and its fair share of aging pains. 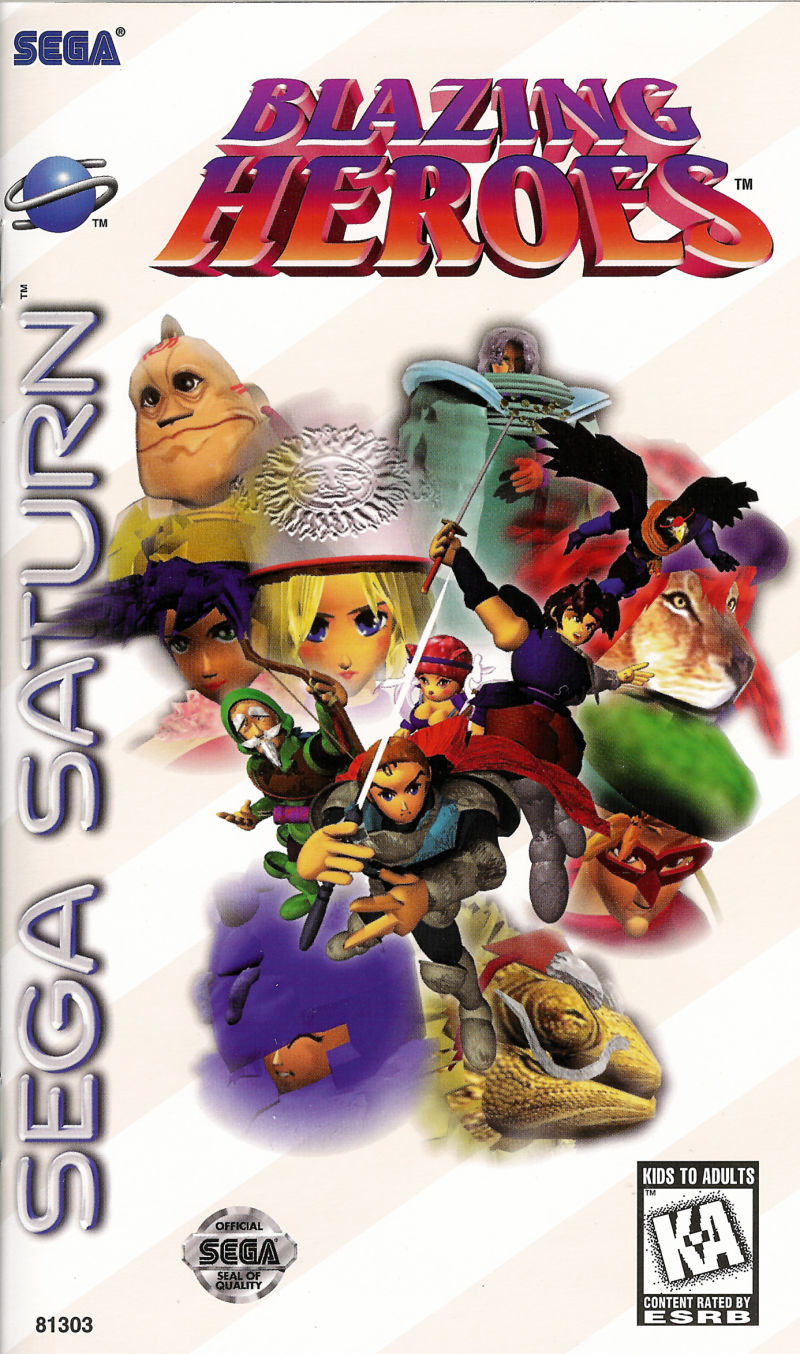 The most striking thing about Blazing Heroes is how it heralds the beginning of a new gaming generation in many ways other than the obvious graphical progress. It does so by offering its narrative front and center, to be parallel to the actual gameplay for the overall experience.

Beginning with CGI cutscenes and an opening narrative, but continuing with dialogue exchanges between the various characters in the story. In total, the narrative is almost twice as much as Shining Force II on the Genesis, despite being a shorter game.

Of course, the fact there is more story doesn't automatically mean its a better one. Sure enough, Blazing Heroes offers nothing new, other than a basic evil warlord with possible greater evil threat behind him. This works well initially, especially due to the deliciously evilness of Lord Bane, the most evil of warlords. 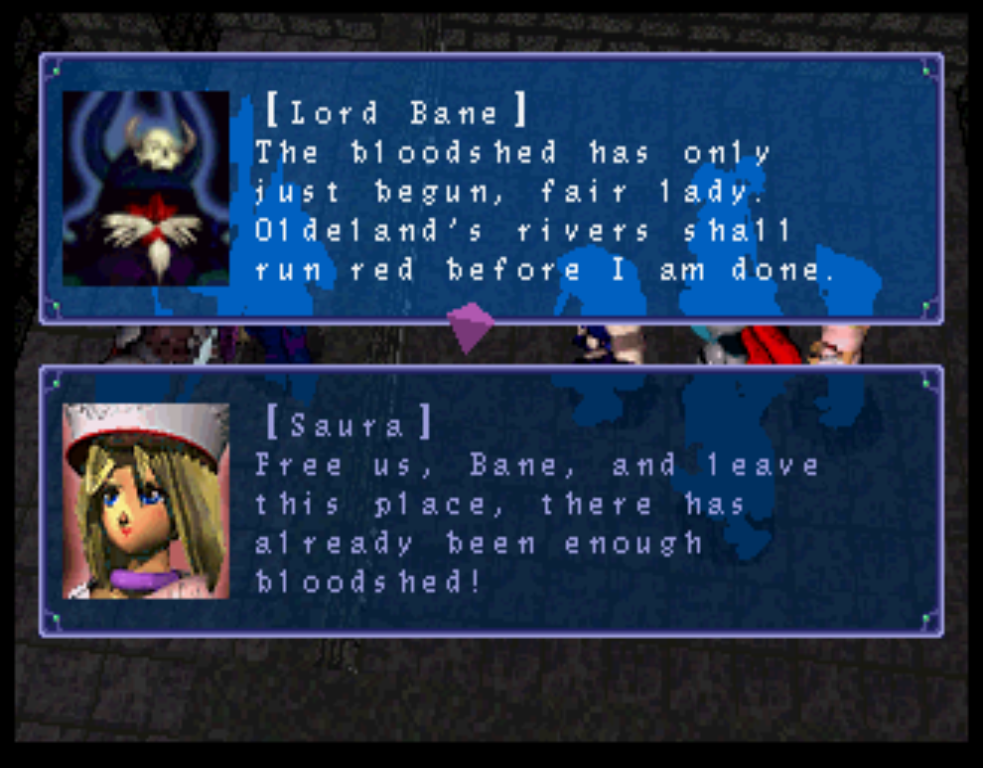 Lord Bane may be evil cliche tropes persnofied, but he is so damn awesome

In many ways, Lord Bane could have been an iconic villain for his time. His evil lines often equal or better those with more infamy such as Kefka from Final Fantasy VI or Dracula from the Castlevania series.

However, he is proof that just as a hero is defined by his nemesis, so is a nemesis is defined by the hero. Since Prince Aragon and his motley crew are such wet napkins, the whole story starts falling flat in the end.

Initially, this didn't seem to be the case, with both the dialogue and overall narrative feeling tight and well-directed. However, the dialogue starts losing style, and obvious grammatical and translation errors start appearing regularly. By the end of the game, the quantity of dialogue starts working against the game, with the characters only losing likeability as their spoken words revels in sloppiness.

Overall, Blazing Heroes could have been a solid story built on a well-tested narrative, but early generational localization makes it sloppier than it should have been.

"You are traitorous rebels. To me, you are gnats to be swatted away"

Like Shining Force and Fire Emblem, Blazing Heroes is a Tactical RPG, with characters moving and fighting in a grind in turn-based battles. Unlike those two, the characters in this game have much more options, and there are less of them in the field. This is similar to another Tactical RPG hybrid game on the PSOne, Arc the Lad. 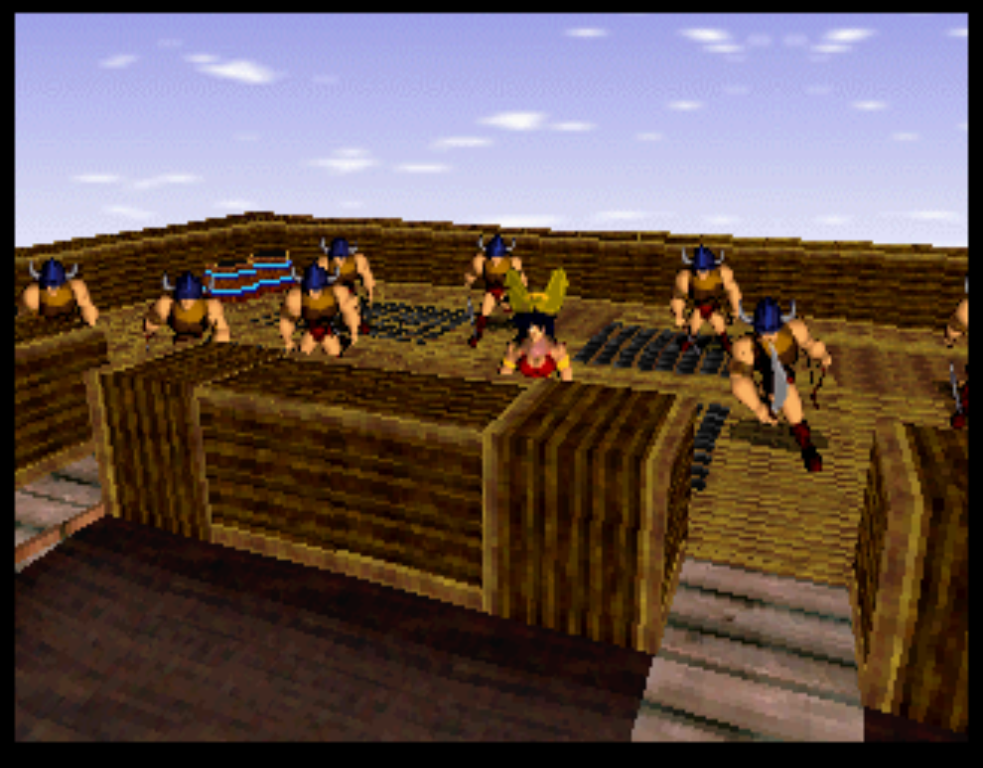 Like all those games, of course there is a battle in top of a ship

To explain the difference:

In Shining Force, each characters can move and either attack or defend. Maybe they have another mode of attack, but they rarely have more than three options, and the attacks rarely consider multiple enemies. In Blazing Heroes, attacks have considerably more range, magic is more heavily utilized, and each character have several choices. Overall, this makes for a game leaning more on the RPG side than the tactical one.

Generally, battles are mostly in the easy side. That's because Aragon and Raiko are always in your party, and Raiko can become a one-man army by the end. It doesn't mean that the game becomes mostly busy works, as the fights are fast enough that you keep having fun, although there is one integral issue.

Each battle, you can choose six characters, each with a unique class from classical brawlers to mages. In the actual fight, you finish your turn before the enemy can move. In your turn, you can move around the field and use your skills. Depending on how much you move, you may not be able to use some skills. The more you use a skill, you can unlock other more powerful skills in that category. Which means that despite standby characters gaining some experience, you must use a character in order to unlock the skills that make them viable later on.

Due to the way that characters level up their skills, there become little incentive to care about using characters equally, as it just handicaps you in fights, and keeps you away from gaining the most powerful moves for your key players. 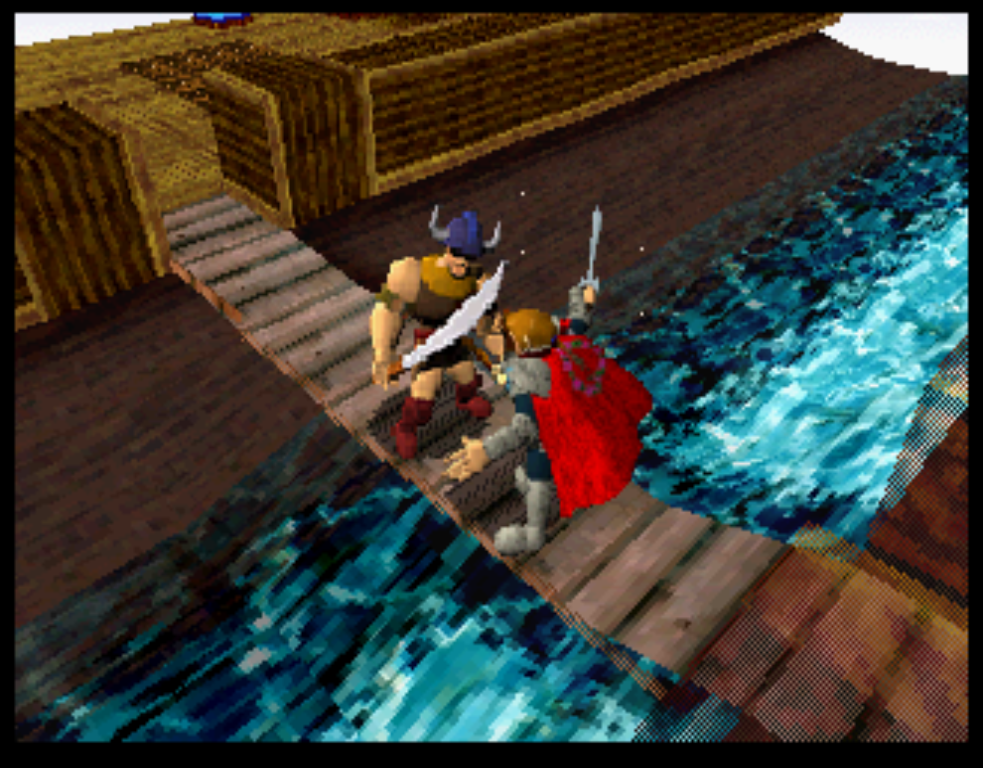 Aragon will of course always be part of the team

With only 6 slots (Which may be useful for the turns not dragging on too much) per match, with two always fixed, this means that half of your team is in the wayside.

This may be a spoiler, but make sure at least three members of your standby team are halfway competent with their skills, and make sure all of them are equipped with the rest of the team. That will avoid creating an unwinnable situation at the end of the game.

As such, even when there is variety in characters and attacks, the game really boils down to using the most powerful attack and steamrolling your way to victory. Only when it surprises you with a sudden difficulty spike or a need to use underutilized characters does the game approach any level of challenge.

"How do we know we can trust him? After all, he is a Ninja (RACISTS)"

For the time, Blazing Heroes was a significant step forward in graphical design. It had CGI cut-scenes, 3D animated polygonal models, a full rotatable camera, and was a clear indication of the 5th generation as a step forward.

Therefore, it's also a clear indication of how badly the 5th generation's polygonal graphics have aged (especially early one).

It's not that the game's graphics are incompetent in any way; it is the best that could have been produced in 1995. All polygonal models are unique, animations are choppy in a way but camera changes when the attacks happen add some much needed depth an action. Backgrounds and the environment are certainly ugly, with poor textures and lighting. 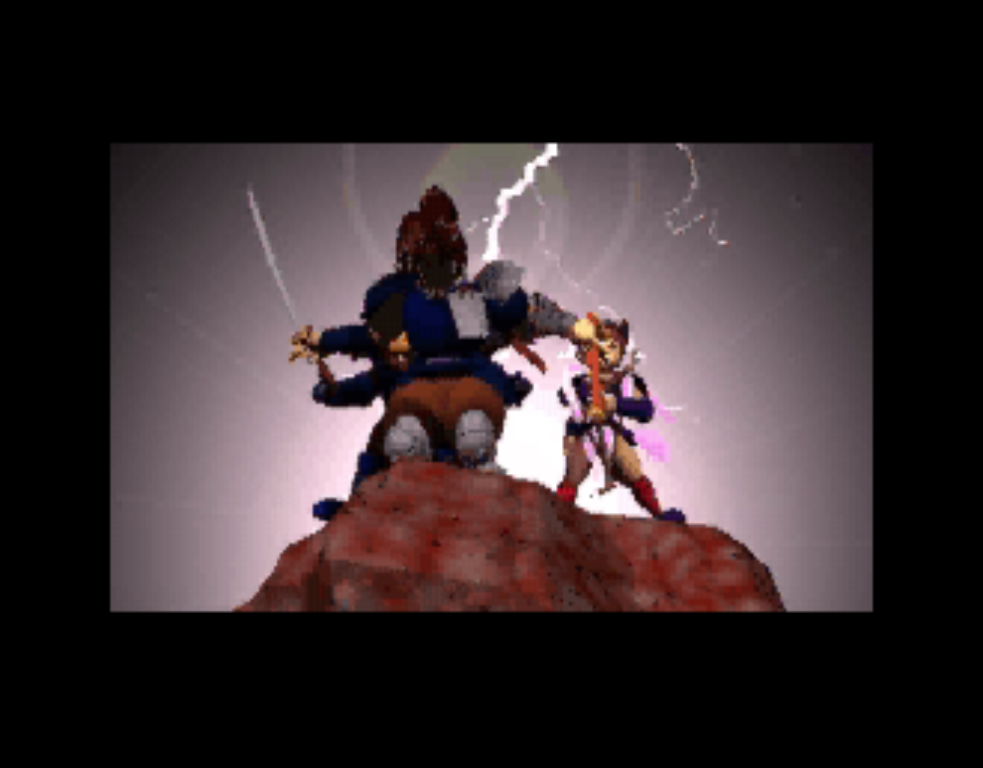 The CGI is actually not bad, with dramatic scaling and good use of the camera

Just that there are no attempts to actually distract from the ugly polygons. For instance, Final Fantasy VII had those boxy character models. However, with the excellent 2D portraits s well as 2D backgrounds, it made them more tolerable.

The fact that the character's portraits are also their same polygonal in-game models just reinforces the ugliness of the graphics.

Musically, the game does not particularly excel nor does it fail. I liked the soundtrack without getting bored with any track, which is positive for a TRPG. One thing to be thankful for is, unlike the negative comments of some reviewers in the past, that there is no voice acting. The worst parts of this game's dialogue would have been much more cringe if actually voiced.

Back in the Saturn's original launch, Blazing Heroes would have been a great game to have. I can even see some play it twice just to try out the characters they didn't use. However, that was not the case for long, as games in the fifth generation quickly outgrew it, and games from past generations aging much better.

It's simply game that occupies the early band of a console's library, where its unique selling points are no longer unique, and its shortcomings are clearer because of that. 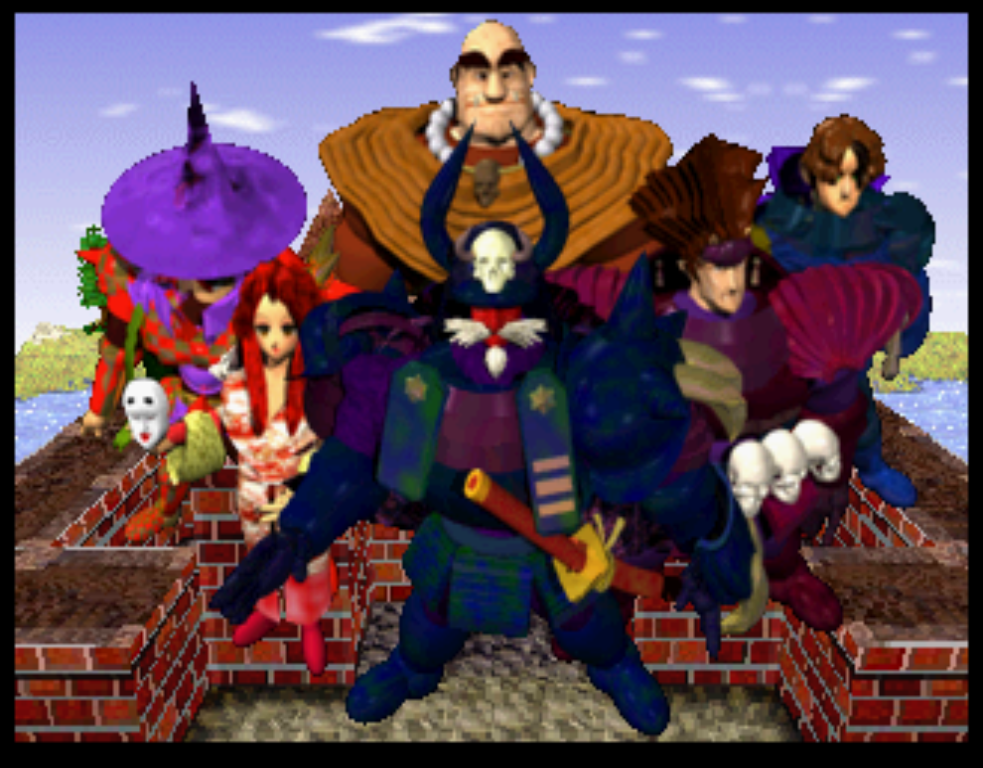 These will be your primery foes, led by the ever evil Lord Bane

1- At one point, when your party split up, make sure to save before you do so.
2- For latter matches, you will need your Elf archer or age to pull up a shield.
4- For near the end game, you will need a magic shield, so use a physical shield whenever possible to unlock it.
5- Using skills unlock newer stronger skills.
6- Enemies may be leveled according to your own level, but skills are important too. Make sure you have at least three competent fighters in your B team.
7- You usually can earn enough money to buy the strongest equipment as you passively play the game. The strongest equipment are in treasure chests.
8- Equipment that are strong but have side effects are not worth it at all.
9- Raiko easily becomes the strongest fighter in the game if you level up his Ninja skills. 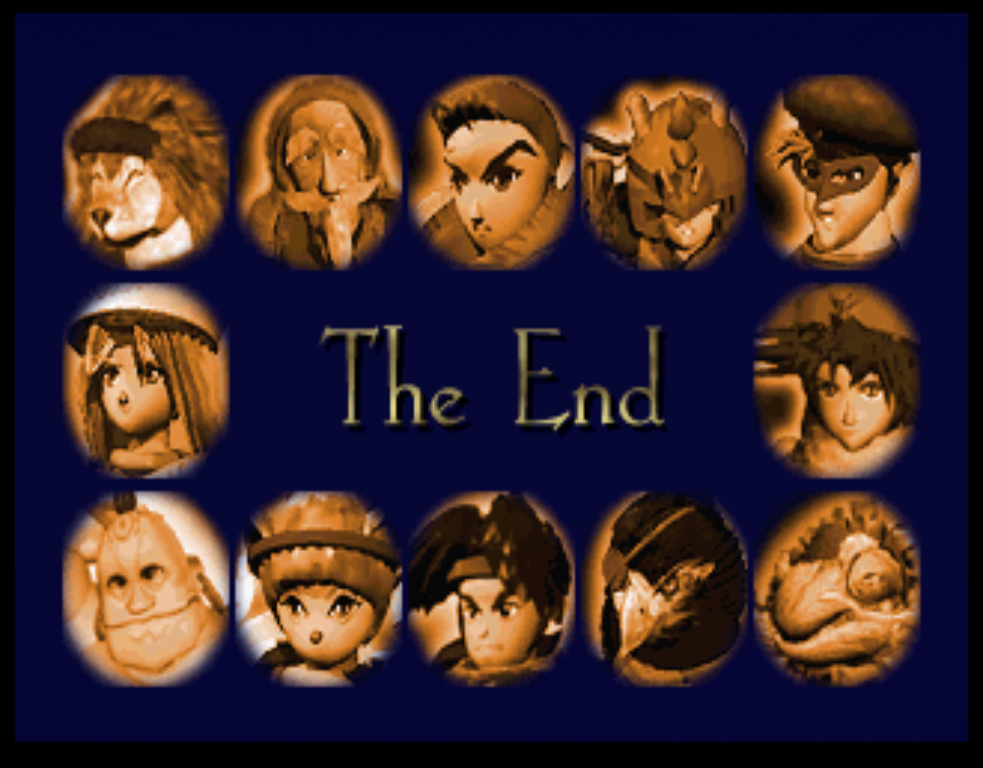 This is one game that I enjoyed, but that I think few others would have the patience to go through. It has little to add over much more accomplished games in the genre, and instead serves as a teaser of what the genre is capable off.

Next game on the list is running a little amok at #88, title Amok (get the joke). From what I have seen, I expect this would be a short and negative review.