Pillars of Eternity II: Deadfire Review | Me, My Cat, And Eothas

Full disclosure: I haven't finished Pillars of Eternity I yet. Yes, I am a fake nerd. I only do this because I of the popularity and pussy one can rope in while pretenting to play CRPGs. However, this does not stop me from trying to review Pillars of Eternity II: Deadfire, which, as far as I have played it, is a fine game.

The game picks up after the events of the last one. The magical soul stone statue under Caed Nua, your castle, awoke, tore itself out of the ground, sucked in everyone's souls and started stomping towards the Deadfire archipelago. Eothas, a god exploded during a war not too long ago, is driving it. You, the same Watcher - a person who can see and interact with souls - are tasked by the other gods to find out what the hell is happening. You might want to get back a piece of your soul that Eothas took, too. 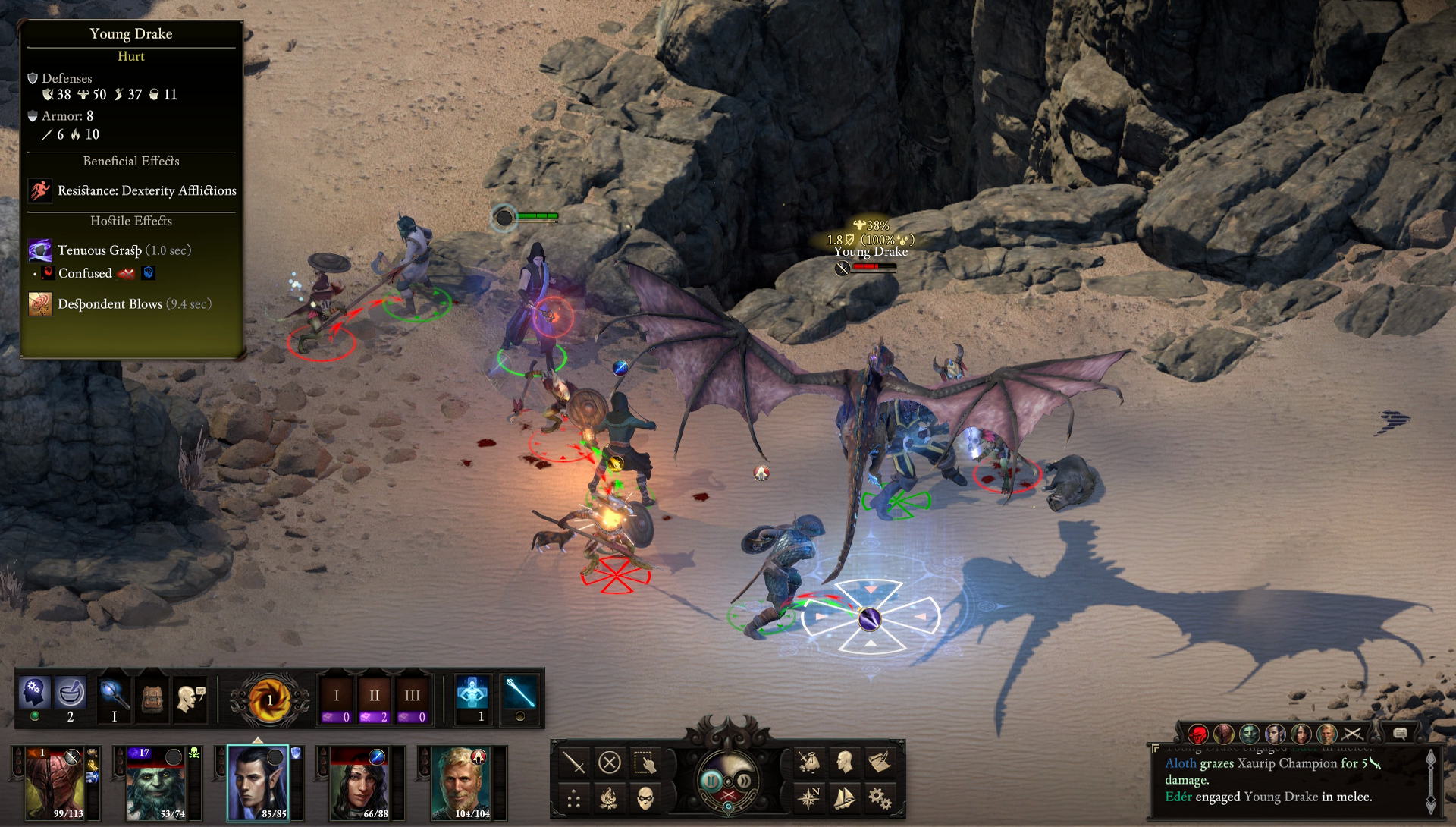 Before starting his music career, Drake had a lot of unpleasant dealings with adventurers.

If you haven't played the first game, PoEII will forcefully feed you the highlights before allowing you to choose a history: the sum of the choices you could have made in the first game that will then influence what happens in the new one. Hilariously enough, one option is "you did everything wrong" - and it's not recommended for new players! Meanwhile, returning players will be able to import their save - and appreciate the breadth of changes in the gameplay.

You'll see them even in character creation. While it is mostly the same - you choose race (kith), sub-race, class (or newly introduced multiclassing), a possible sub class, your employment, your land of birth, and so on... and weapon specialization! PoEII is no less lenient over weapon choices than PoEI, but the specialization adds a new layer, with modal abilities that can trade say, speed, for penetration. Oh, once you recruit a named follower, you get a choice of one of three classes they can be. Meanwhile, your class and culture plays a lot more into dialogues this time, which is amazingly cool! You're no longer a priest of Eothas asking a stranger what Eothas is. 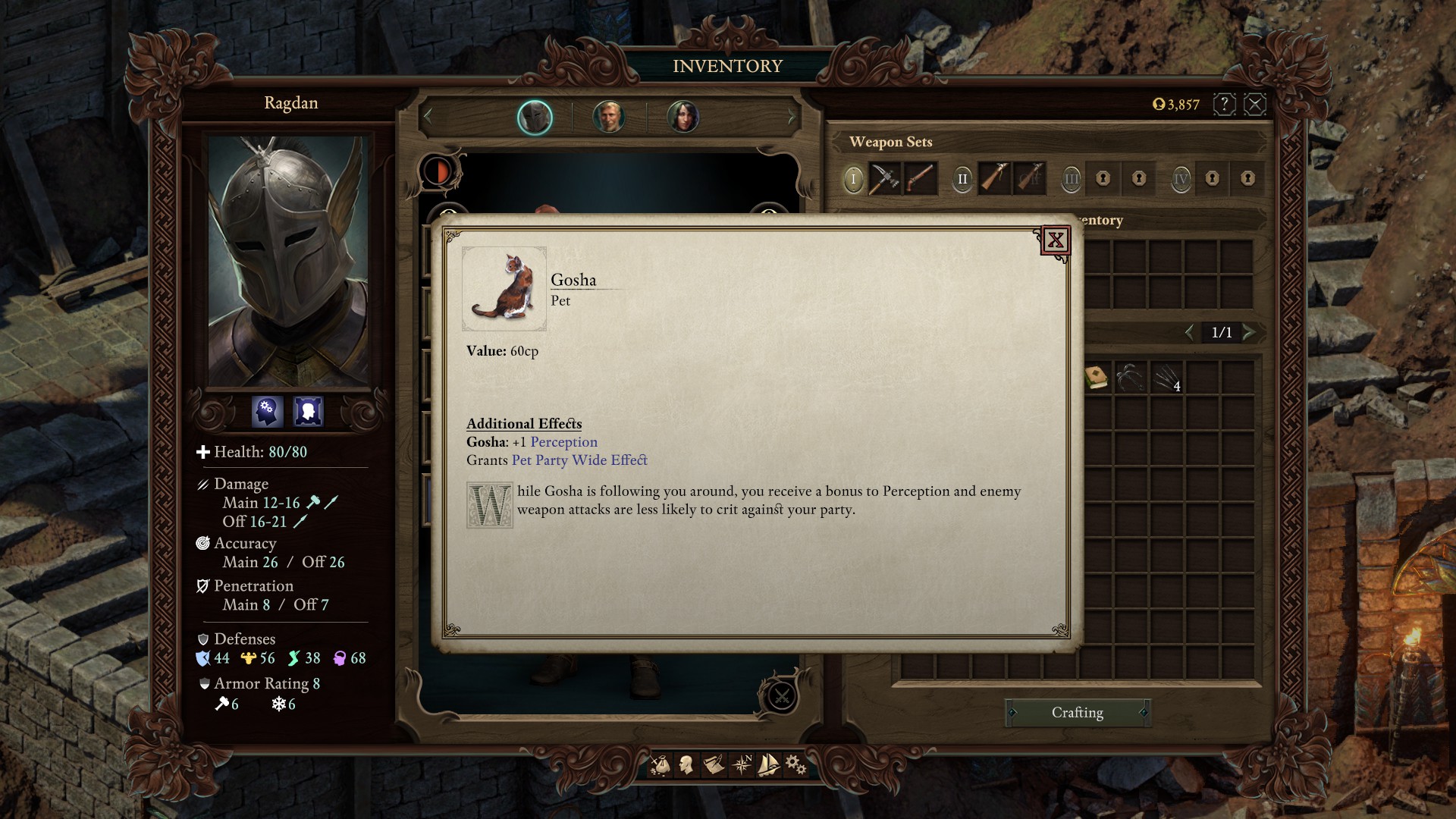 Oh yes, PoEII shows massive improvements in both story telling and ease of use. The combat system still runs on the same Dungeons and Dragons-like mishmash of stats, skills and resistances, but that has been fixed to make the game more playable. In the previous games, wizardy types ran into the "five minute day problem" where they expended all of their spells in a battle and had to rest (for 8 hours) to regain them. This was a massive pain in the ass, especially since you needed camping supplies to do so. I hope you enjoy sleeping in the middle of the dungeon/fast-forward running through several floors to restock yourself.

This was very much fixed in PoEII. The wizard - and priest - spells now reset after each battle. Meanwhile, other classes each have unique resources they use to power their abilities - this is similar to World of Warcraft, as far as I understand. Wizards are not only no longer required to sleep for 8 hours after every fight, they also aren't the only ones that can run out of cool powers in a fight. The Empowerment system works to remedy this - you gain Empower points (refilled after rest) that can be used to restore half of your class resources (or spell castings) or to supercharge one power. I think this is a lot cooler. Also, is not tied to a specific resource now, though eating food will give you bonuses and heal any woods your characters had gained from falling in the fight - get three wounds and the fourth is fatal! 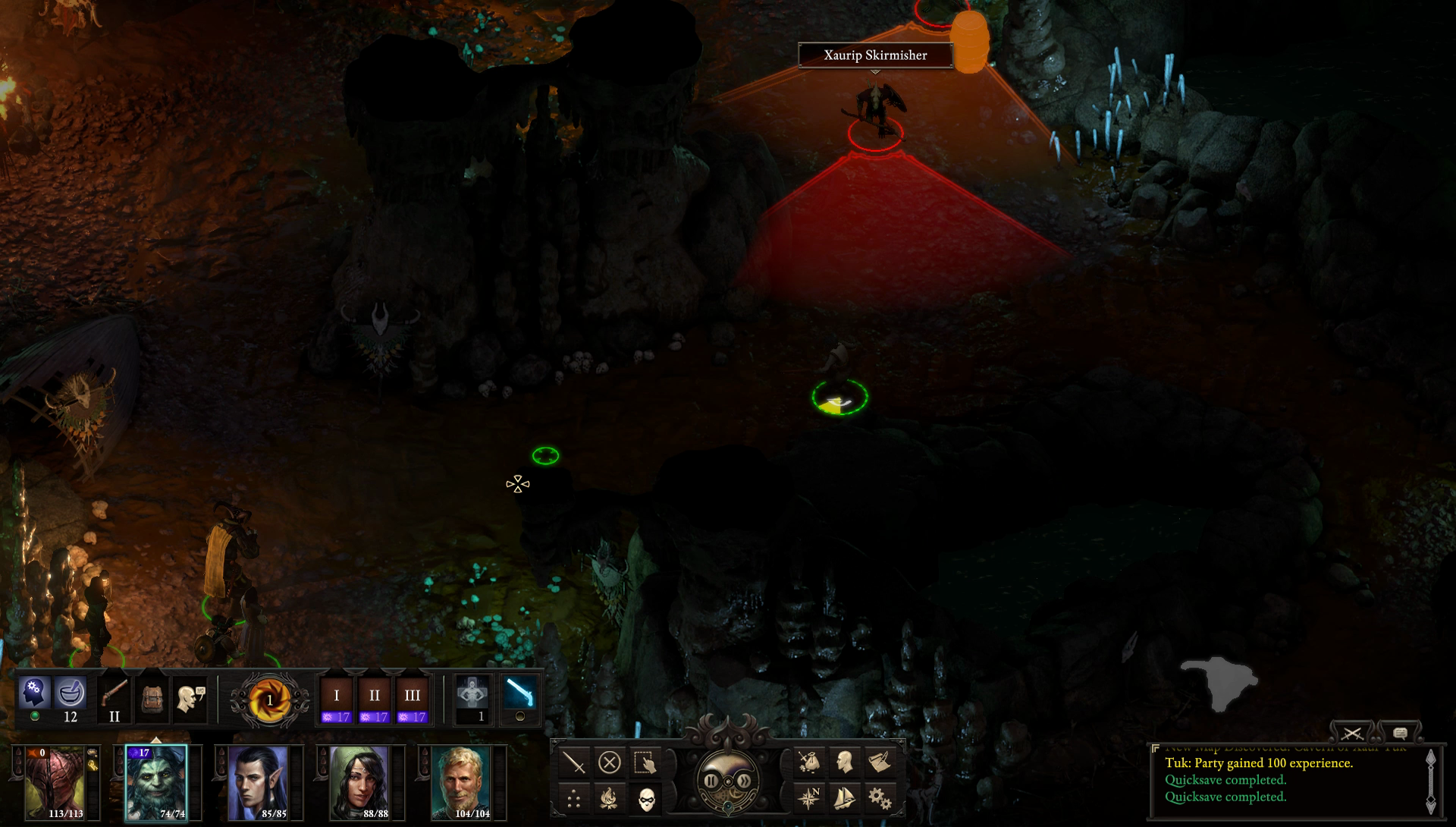 The game also likes to pretend that you'll use stealth.

Amazingly enough, dialogues improved massively, too. The game now features the hyperlink word system from Tyranny, which allows you to check what anyone's talking about just by hovering the cursors over a specific word and reading the description. It's especially welcome when the talk turns to the Huana people of the Archipelago, the various nations that have interests there, and the names of gods.

The Archipelago is an interesting, but a natural place to take the game. The previous title was set in Dyrwood, the obvious fantasy stand in for young United States: newly independent and fighting the natives. Of course, the implementation was a lot less sordid than it was in real life, and Eir Glanfanh wasn't powerless against the settlers. Deadfire also bears the markings of colonialism: the tensions betweens the locals and the colonists, various established nations sending trading companies to wring the most profit out the region, and so on. However, it is still a game about a famous soul seer seeking a giant walking statue - the game likes to point that the last part is sounds ridiculous even in-universe - so you don't get into the matters of chattel slavery and oppression. Maybe it is for the best. 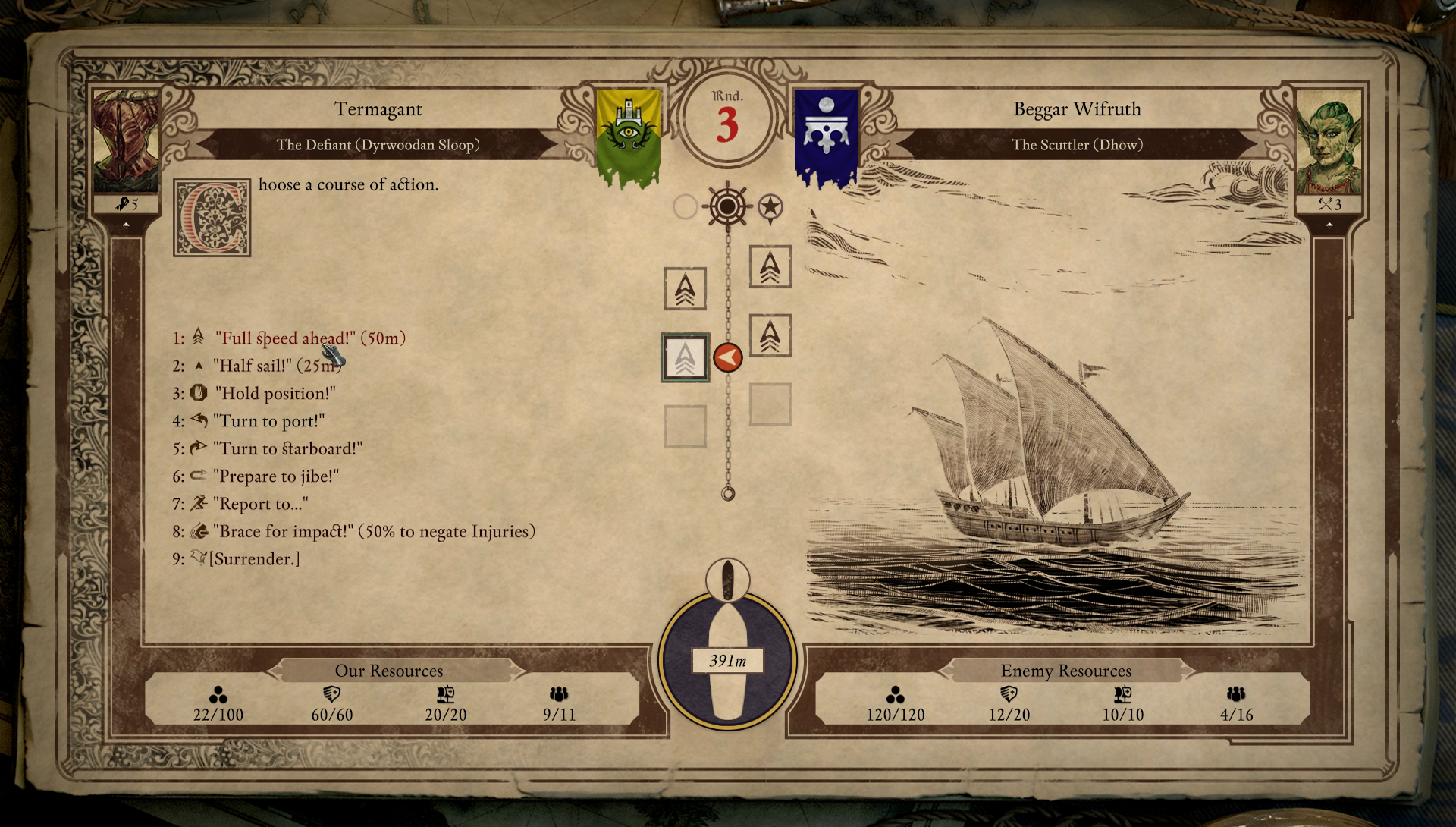 Master and Commander: The Far Side of a Text Adventure

But the game is still set in an archipelago, which means that sea travel is inevitable. In this game, taking care of your ship stands replaces watching over a castle. Your boat must be manned - the sailors you hire are named, have character quirks and specializations - supplied with food, water, cannon shot and other things, and upgraded as the time goes. There's a ship battle minigame, of the abstract text adventure sort. The system sort of reminds of the Battlefleet Gothic tabletop game, even if heavily condensed. A fight is divided into rounds, and both you and your oponent get three turns of action in each. The innititive is decided at the start of the round, which is important if you're running away or want to have the upper hand in the battle of the cannons. Boarding is an option, but you must be wary of musket alphastrikes - who cares how slow they are to reload if they can easily take down low-level characters.

But here I go back to praise again: the game is so much better than before. It looks a lot better than the predecessor, for one. Going back to playing Pillars I after PoEII is jarring. The interface also bears quality of life improvements, like giving you all the pertinent info about items without needing to click on them. Heck, even the enchantable unique weapons now have thematically appropriately named enchantments! Meanwhile, the audio part was improved in one massive way: the game is overwhelmingly voiced now. If a character is worthy of a portrait, he's worthy of voiced lines of dialogue. It's no wonder that the game install is more than 20Gb bigger this time. 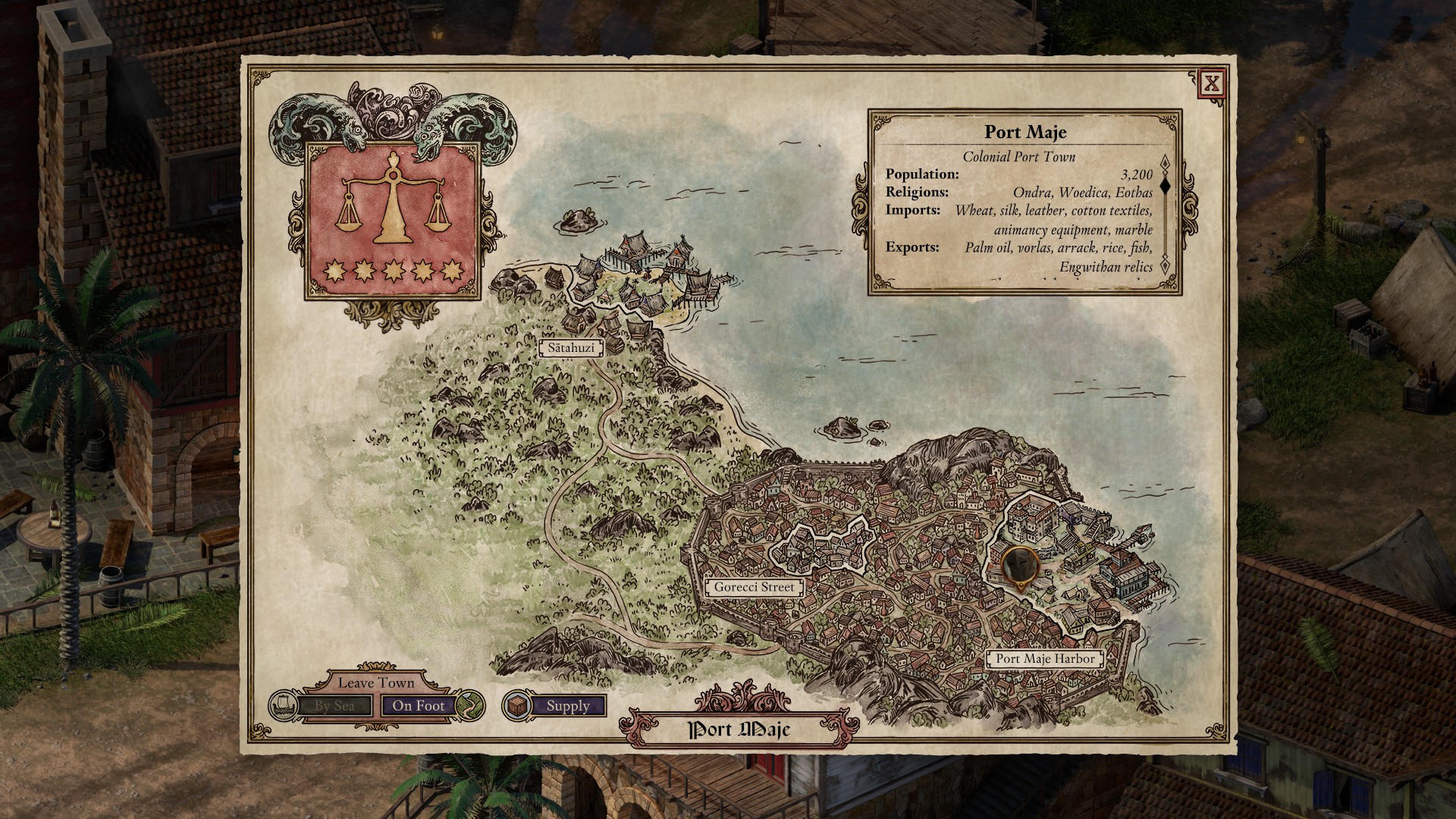 The 2D art in the game is pretty darn sweet, too.

Also, it's probably not a new thing, but you can have a pet that gives a minor passive buff, which is great, because I love cats. You can have other types of pets, too, but who cares about that when you can find a free cat very early in the game.

All in all, Pillars of Eternity II: Deadfire is a marked improvement over the predecessor. Where something like Dragon Age II was dumbed down massively between games, PoEII is was rejiggered masterfully and with a keen eye towards detail. Lessons have clearly been learned from Tyranny - hopefully, the story department got better, too - which makes the game very easy to recommend. Go play it, just don't blame me if you get stuck in character creation as the amount of options feels huge!