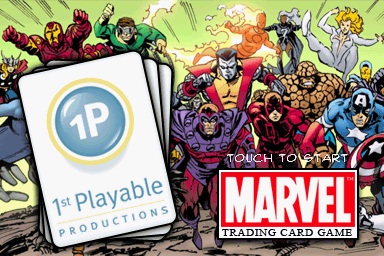 When I was growing up in the 1980s and continuing into the 1990s, comic books and baseball cards were becoming a major force. The cards were crossing into mainstream appeal as people read newspapers about how a dusty old rookie card or an ancient copy of Action Comics were getting sold at auction houses for millions. So it was understandable that adults began picking up packs of Topps trading cards and issues of Death of Superman like this was going to pay off the car note someday. This kind of interest wasn't sustainable and demand sharply fell.

When the bubble burst, the status quo was shaken up and we were all left with boxes of useless cards and mediocre books but the appetite for collecting was imprinted on the lot of us. Fortunately for us a little game called Magic the Gathering from Wizards of the Coast taught us that we could be doing a lot more with our cards than just looking at them.

Wizards of the Coast would then collaborate with Nintendo to distribute the Pokemon card game to the west ensuring their market dominance and that America now had kids as well as adults buying booster packs in bulk. Konami like many others saw this and paired with Shonen Jump's latest hit Yu-Gi-Oh! to create the Duel Masters card game. Looking for a western partner like Nintendo had Konami found one in Upper Deck. In 2002 Yu-Gi-Oh! was released to the US market.

With this, the trinity of collectible card games was formed. Upper Deck however wouldn't be satisfied with just sitting on distribution and decided to enter the market with their own game. They approached Marvel and then DC Comics to lend characters for their new collectible card game known as Vs. System. It would combine many of the elements we had already seen in the big three, but marketed specifically to the comic book distributors that sell collectible card games. In 2004, two short years after Yu-Gi-Oh! was released in America, Vs. System debuted on the market coinciding with the end of Marvel and DC's big crossover book JLA/Avengers. 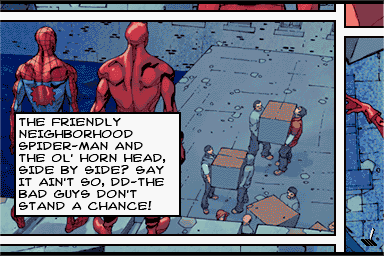 In 2005 it was revealed that Konami would expand on their collaboration with Upper Deck by producing a video game based on the Vs. System's Marvel themed decks. Vicious Cycle would take over development duties of the game on PC and PSP while a brand new company formed by a former VP of Vicarious Visions would take on the DS version. The original idea was to make a game with a hero and villain single player and a strong complimentary online multiplayer. The online system would work across all three platforms with a focus on matchmaking and a store to upgrade your deck. That wouldn't happen on the DS though due to the development split up. As development began, big trouble was brewing between Konami and Upper Deck.

Konami brought a lawsuit forward with a distributor they caught selling bootleg Yu-Gi-Oh! cards to Toys R' Us in 2007. The dumbfounded distributor's response was that they bought these bootleg cards from Upper Deck and it turns out they actually did. At the time Upper Deck's Chairman Richard McWilliam decided to produce their own Yu-Gi-Oh! cards in China bypassing Konami all together. Konami sued and won and recovered the rights to distribution in North America of their Yu-Gi-Oh! franchise for 2008. 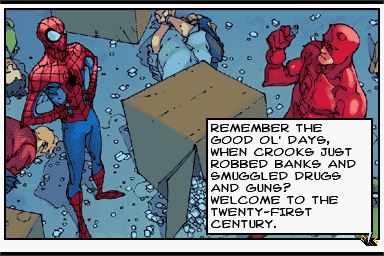 Marvel Trading Card Game would hit the market in 2007 signaling the rapid decline of the Vs. System. By 2008 Upper Deck went from producing 5-6 expansion packs a year to 2 packs. That would be the last year new expansions were added. Upon the game's 1 year anniversary, all online booster packs were opened up for the PSP and PC version and the game became a free service until Konami finally shut it down.

Upper Deck would team up again with Marvel in 2014 and overhaul the Vs. System for a new generation of gamers leaving the Marvel Trading Card Game as a relic of a forgotten time in collectible card gaming. As I picked it up to play the game for the first time, it became apparent that rookie developers 1st Playable Productions really struggled to figure out what they wanted to make happen on the DS. They would eventually find their niche in LeapFrog Tablet games and other children focused shovelware, but the Nintendo DS version of Marvel Trading Card Game was pretty much a failure. Unfortunately, that's the version I happen to own so this might be a bit skewed based on what I went through. 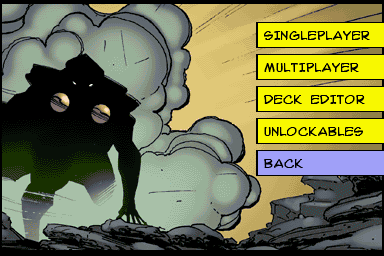 The only way I can sum what I experienced is with a classic joke about two engineers.

Bill is out walking with a bike and finds his friend Steve in the distance. He walks over and the first thing Steve says to him is "hey Bill, where did you get that bike?"

"You won't believe this", Bill replies. "I'm at the park and this woman comes riding up to me. She throws her bike down and begins to strips off her dress. She's just standing there naked looking absolutely amazing and I just stood right in front of her shocked. Then she looks me straight in the eyes and says 'everything I have is yours.' So I thanked her, picked up the bike, and started walking home."

Steve was shocked, but finally looks at his friend and says, "you made the right choice Bill. I sincerely doubt you would have fit in that dress."

What the engineers who created this game did was give us a game that only works if you know exactly how to play it. When you play this game you are choosing the bicycle. It isn't a dress that doesn't fit. It isn't a beautiful passionate woman. It's the bicycle which could be something right up your alley if you know how to ride it. 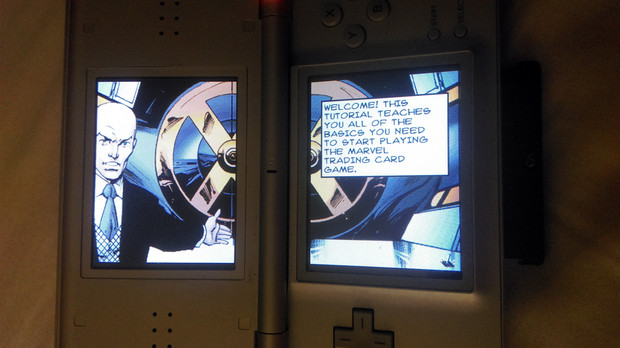 The game begins with arguably one of the worst tutorials in video games. It takes Professor Charles Xavier 160+ dialog boxes to explain the basics of the game. The expert could skip past it and begin the game. The novice will read through it, forget everything that was said at the beginning, then rip their hair out trying to figure how to utilize the awful UI in their favor. It's the equivalent of reading a 30 page rule book, throwing the rule book in the trash and then trying to setup and play the game flawlessly on your first try.

That is just not possible as UI present in the DS version leaves no room for error. It replicates real life almost expertly as cards are played in multiple stages from draw to setting up resource cards, then setting up characters and their attacks and then responding in kind over and over. Each battle running anywhere from 20 to 50 minutes. If you play the wrong card you are stuck and if you can't tell by the way that my DS is sideways in the picture above, there isn't much screen for these cards to share as the basic card commands the left screen and the entire battle is squished on to the right. It's uncomfortable to play and look at in all honesty.

The PSP and PC versions would seem to fair so much better that they are the only screenshots used in advertisements. It's baffeling that they wouldn't use the bottom screen as your play area and the top screen as an opponent's on the DS.

I'm not going to go into the PSP or PC version of this game because I didn't want to play it after this and I really don't need to. The DS version is the absolute worst version possible since it is almost unplayable. Once you do wrap your head around the garbage UI, illegible playing field, and annoying tutorial, you have a real card game. A card game with over 800 unique cards to customize your deck based on your favorite super teams with interesting ability boosters and unique plot twists that affect the game. A card game with two story modes focused on heroes and villains and a story line to connect to your personal decks. A card game with local multiplayer just in case you find that one person on Earth who can play this with you and actually wants to.

There is something for the die hard comic book fans in the Marvel Trading Card Game system and if there is anything this poor excuse for a game has done, it's make me want to see how Vs. System plays in real life. I think the addition of a support row and the way you build resources makes the game feel unique. Unfortunately I just don't see enough here to recommend the Vs. System over a classic game of Magic, Yu-Gi-Oh or Pokemon.  Those three just flow better and that's why we saw Upper Deck struggle in the market. At that point America just didn't need another game like Magic. What was needed was something a bit different and this is where we saw Munchkin and Cards Against Humanity rise up.

When Upper Deck introduced the DC expansion, the Vs. System had the makings of being a contender in the marketplace. Who wouldn't be excited at pitting the X-men vs the Justice League. However, what I experienced in Marvel Trading Card Game could only be expressed as a distraction. As a video game, I would rank my experience on the DS among the worst I've played and if there was a credible game here I would still struggle to see how it would have helped Upper Deck sell more Vs. System boosters and expansions with a market saturated by stronger games.

Poor management, late timing, and mediocrity buried what could have been one of the biggest collaborations in gaming. Marvel Trading Card Game for the DS is a bad game and even if you could argue the PC and PSP versions faired better, with the online gone and the battle system tweaked I'd argue for anyone interested to visit a comicbook store and grab a box of 2PCG.

Marvel Trading Card game has some unique ideas but plenty of games before and after it's release did it better. On paper as a crossover game it easily could have been one of the best. In practice, it asks too much of the player.