What makes Fallen London and Sunless Sea stand out among other games? I'd say it's the writing. It's very laconic for a setting that deals heavily in mystery and horror. It wields the minimalist approach like a scalpel, using those few words with grace and precision. After all, your imagination can cook up horrors much more personal than any game writer could. And Weather Factory, staffed with the talent behind Fallen Londor and Suless Sea, is the best studio to tackle a game like Cultist Simulator. 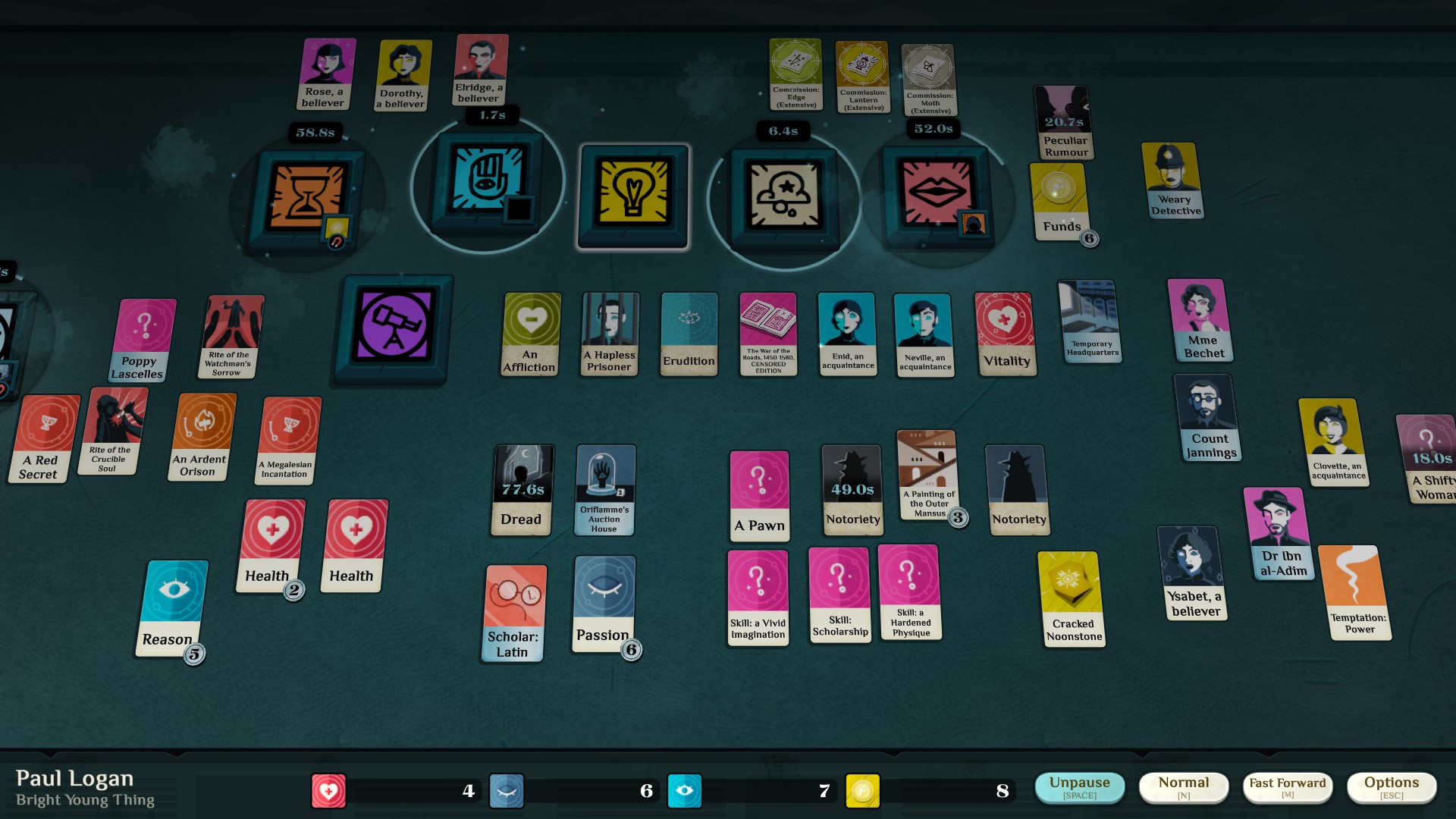 It really needs red string to point out the insanity.

CS, unlike Fallen London or Sunless Sea, is more reliant on a premise than a plot. You are a perfectly normal person in some vaguely Londonesque city at the end of the 19th century. However, you have a brush with the unknown. A dead patient appears in your dreams. Notes of a madman's ramblings start making sense. You inherit the work of your father, who had laid down his health in investing a cult leader. Whatever way that happens, you awaken to the fact that The Grail, The Mansus, The Moth and other forces are working beyond the walls of the world...

So what do you do, as a newly minted seeker of the occult? You work, both to keep yourself fed and healthy, and to acquire tomes of ancient lore. The tomes must be studied for bits of truth, which can be used to start a cult and turn acquaintances into believers. Illness and madness might befall you – those must be fought off! As for the more deliberate fighting, well, you might attract the unfriendly attentions from the law, too.... All the while, you're trying to perform ancient rites and mount expeditions to recover artifacts to help you in your work. 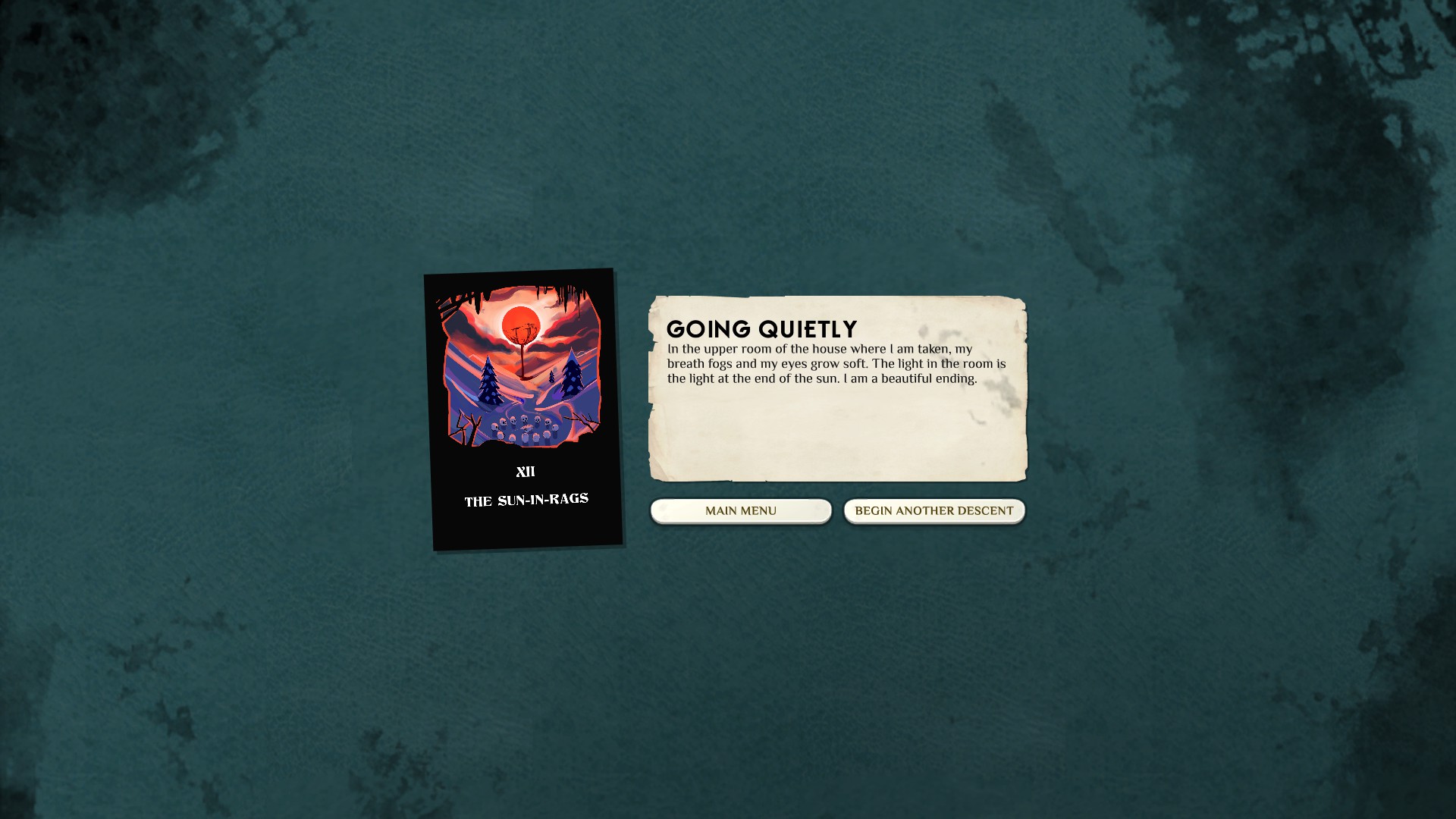 Supernatural loan sharks can be very literal about wanting to eat you.

How do you do all this stuff? A more conventional game would have given you a map with interest points or maybe even a cult hideout to manage. Cultist Simulator, however, has a unique approach to it; you only have a table with cards and tiles laid on top of it. You can arrange them however you please. However, for things to happen, cards must be slotted into tiles. A card represents a state or an item, like a job position, Funds, arcane tomes and eldritch secrets. Tiles are actions, like Work, Study, Explore and so on. Combine the Work tile and the Institute card, and your character will go to work. You'll receive funds - and your Institute card - in but a minute. Slot in a Passion card into Work and you'll be asked to sacrifice a card as inspiration – that's how you produce paintings, which might be worth something, but they will also attract attention.

Several tiles are permanent and at your command. Only the Time Is Passing tile is always there, with its timer constantly running. Yet that tile is not beholden to you – your duty is to feed it Funds cards, or else your rookie cultist might fall sick, and that's something else to deal with. There are both positive and negative temporary tiles. There are temporary cards, too. 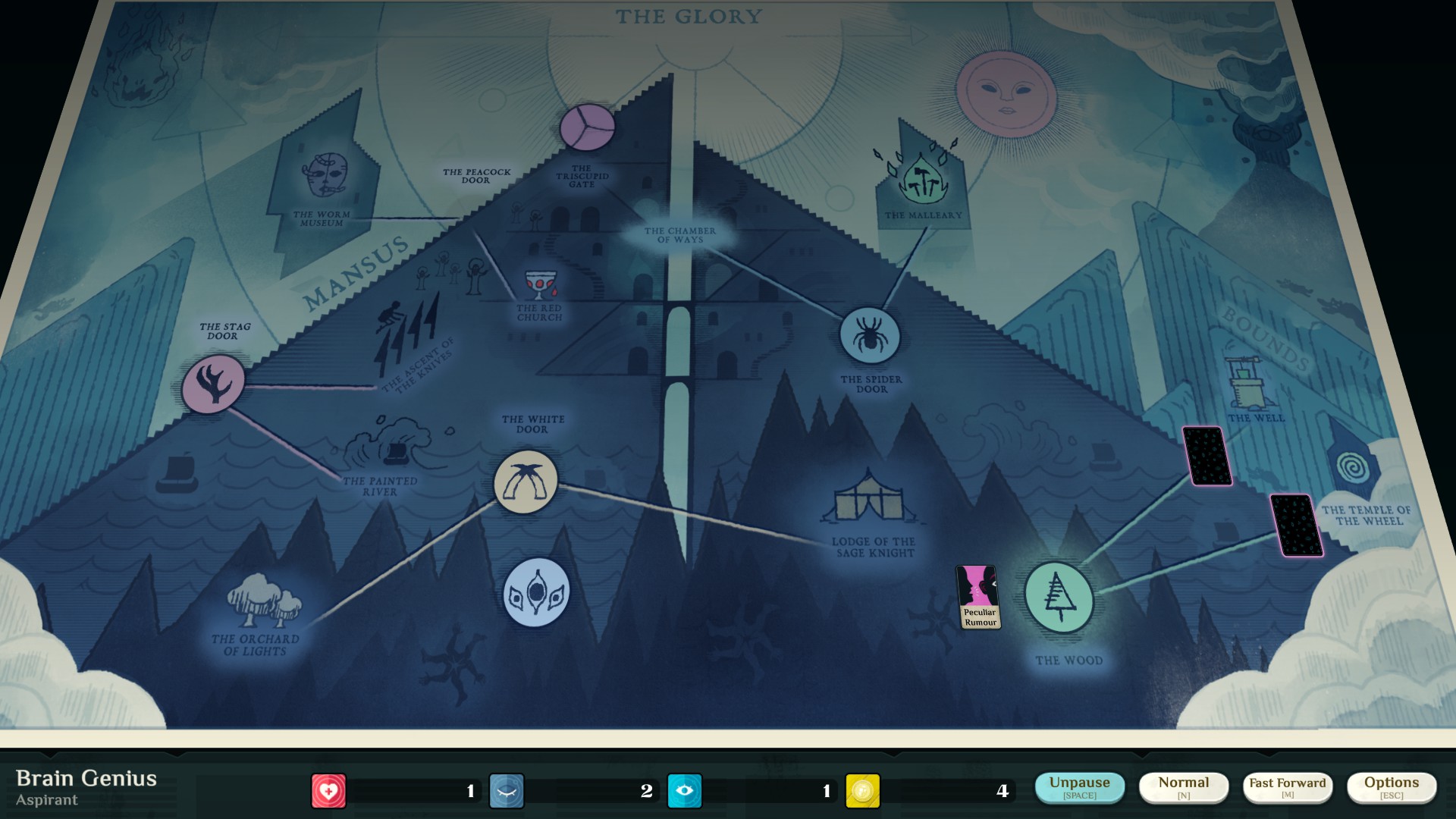 Incidentally, I lied about there being no maps in the game. The world behind the dreams is quite mapped, as you'll find out!

Dealing with negative cards is a major part of the game. Dread is probably the most often of unwelcome visitors – if Despair tile grabs 3 of those (or Injury, in any combination), your cultist will go insane. This has happened to me way too often. But if you can slot as many Contentment cards as Despair has of negative ones, you'll get a small reward for getting your mind in order. But that's not the only way to deal with Dread. It can be used as painting inspiration, it can be slept upon – with a Contentment card – to produce Reason, which, together with Passion and Health, is the closest the game has to RPG stats. You'll always want to have the most Reason, Passion and Health cards you can have. Luckily for us, Cultist Simulator is a game where good things can be extracted even from the direst of situations.

However, your success depends on luck in many ways. Time is Passing is always running, and it produces bad tiles at random. Sometimes, you can just be hit by a streak of bad luck while not having any ways to produce Contentment. And failures in the early game can quickly overwhelm your resources. It will also be a challenge for new players, since it will take time to realize which card/tile combos produce what – and which ones are to be avoided. At this early stage, even the developers agree that the balance is all shot, so things might get a little easier once we face the full release. 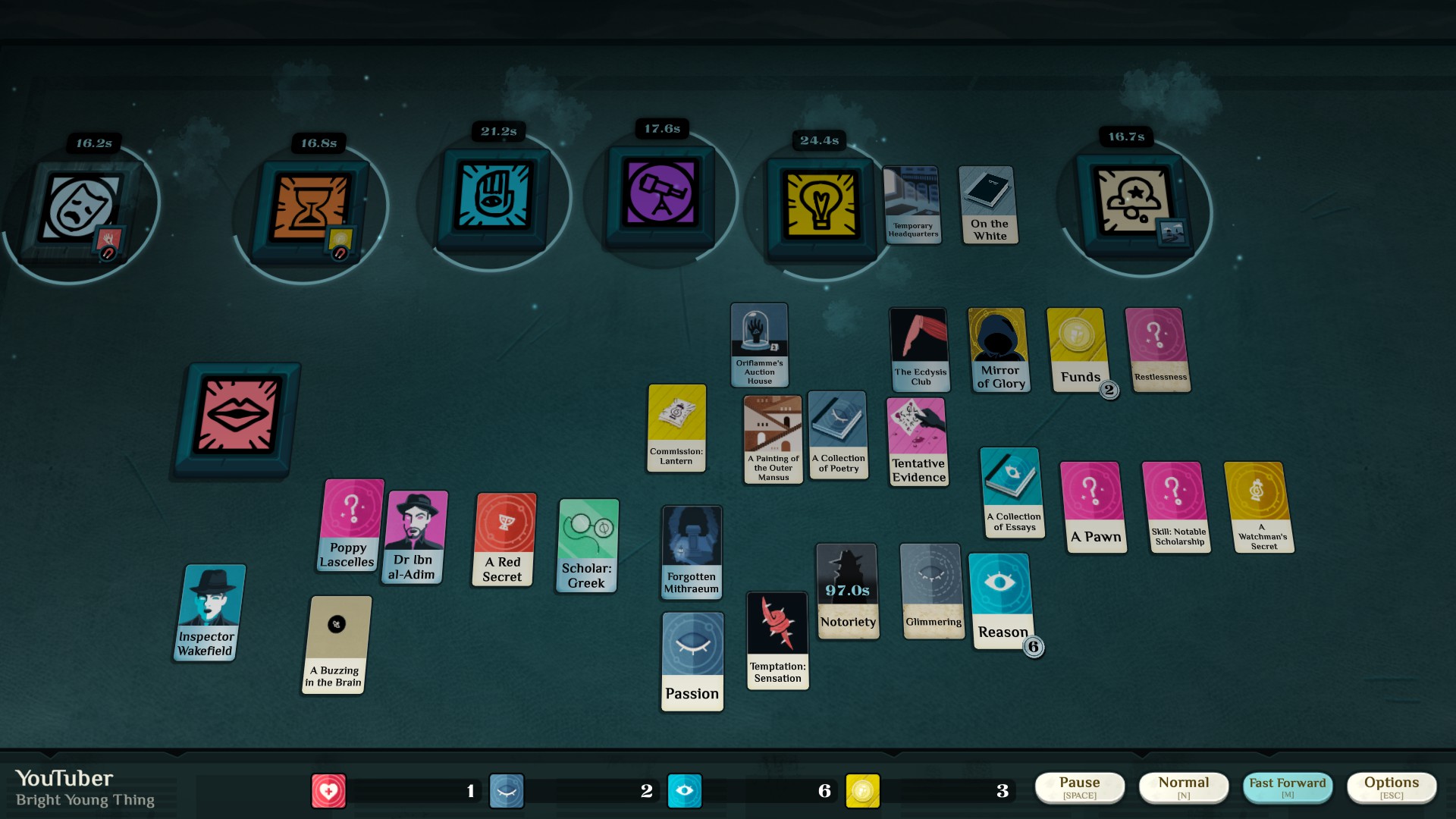 What else is missing in the game? Some of the text and art. It's not a big issue, really, since most of the stuff is there. The game's art style is quite cool, minimal and elegant. The writing is good, too, bearing the unmistakable touch of its creators. And hey, the spooky cosmology is quite original – it's not just reheated Cthulhu Mythos! I find it all very enjoyable and evocative.

Cultist Simulator is shaping up to be quite the cool game. The handling of the premise is original, as is the spinning plate approach to plumbing the void for obscure secrets. Now, if only the damned Expeditions stopped eating my named followers!