Shenmue: Whats's the Big Deal About This Game?

A compilation of the Dreamcast classic is to be released for current-gen consoles and PC later this year, but why is there so much noise around an almost two decades old series?

You may have heard of Shenmue, or seen Michael Huber drop to his knees at the reveal of the upcoming Shenmue 3; Heck, if you owned the now legendary Dreamcast, you may have even played it. But what is it, that is so special about a game that is almost 20 years old? At the time there was nothing like it, not at that scale. The estimated production costs also reflect that; Shenmue cost as much as $70 million to develop which, in 1999, was a record-breaking budget for a game. 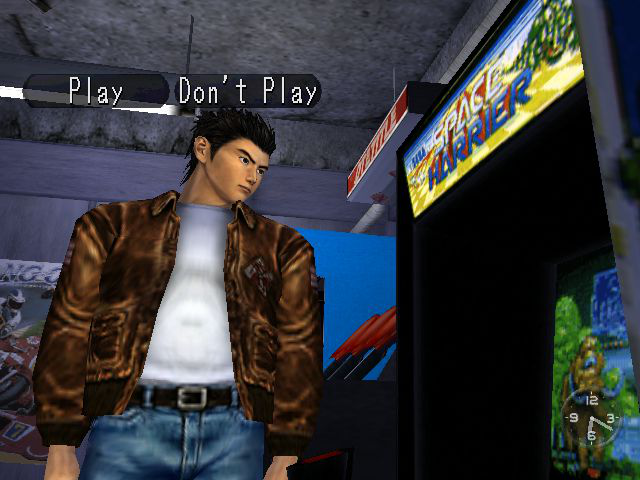 As the story begins, you assume the role of Ryo Hazuki, a young, initially brash martial artist who witnesses the death of his father, but fails to stand in the way of the killer. After recovering from this event, Ryo sets out into a faithfully recreated Japanese city of Yokosuka to gather clues on the whereabouts of his father's murderer, Lan Di, who commands a mysterious and intimidating presence during his few appearances. While the plot itself is hardly revolutionary, it is the setting, the pacing of the story and the characters you meet and interact with, which provide a memorable one-of-a-kind experience.

If you are familiar with the Yakuza series, a game franchise which has been heavily inspired by Shenmue, then you already know what you're potentially getting yourself into. Similarly, at its core, Shenmue is a 3D beat-em-up with an emphasis on exploration and dialogue. You spend most of your time talking to other people, gathering information and progressing the story. There's more than enough fighting to be done, however, and each battle encounter provides an excellent opportunity to put recently learned moves to the test. New moves can be acquired by purchasing (or finding) scrolls, or by interacting with other martial arts experts around the city. Much like in fighting games, each move consists of a particular button combination and it is recommended to practice them, either in the dojo at home, or at a small parking lot in the city. These practice sessions offer an unusually serene gameplay experience and demonstrate how, gradually, Ryo becomes a more skilled fighter based on hard work, not mere accumulation of stats.

Shenmue is also known for popularising quick time events and, unlike in so many other games, they were integrated into gameplay quite well. Failing at them during battle would sometimes lead to a "Game Over" screen, but often the story would continue, forcing Ryo to carry the shame of defeat along with him. It is in-between these moments of fighting and plot progression, where the game offers various entertaining distractions. Simply walking around Yokosuka is already fulfilling, but how about visiting the local sms tracker app convenience store to purchase some batteries for your cassette player (yes, the game is that old), or other necessities? Or maybe grab a refreshing drink from the nearby vending machine after an arduous battle? If you need some time off, you can go to the arcade and play some of the older games made by SEGA. There is a lot to do and it is this variety which makes the game stand out.

All of it may not seem like much today; every open-world game has a wide range of activities and pastimes. But in 1999, a game that combined such freedom of action and a coherent, well-written story, was a rarity. Sure you can guide Ryo to track down Lan Di and get revenge, but you can also postpone it, stay at home and just play video games; at a certain point you can even get a job. This mostly refers to the original Shenmue, but Shenmue II does exactly what you might expect - it serves as a worthy continuation of the storyline, expands in terms of size and scope by introducing new characters and activities, and successfully builds upon everything the first game sets up. Think of it as an extension, rather than a sequel.

Visually, the games have aged surprisingly well and would look great on modern systems with even minor updates. One very important component, which can easily be overlooked, is the musical score. While it may not be to everybody's tastes, it does create the necessary tone and depth for any event - it's saddening whenever there is loss, full of determination and hope once you embark on a new adventure, creates a sense of urgency and hazard while in battle, and even manages to become heart-warming and cute during the romantic scenes.

Following its release, this franchise has likely influenced the gaming industry in more ways than it gets credit for and, since a compilation of both games is being released later this year, I strongly urge you to give it a try. I hope I have managed to pique your interest enough to do so. If you have already played the game, why not share some pivotal memories in the comments below?