Tokyo Xanadu eX+ is an action RPG made by Falcom and published by Aksys in 2017. It's a rerelease of the original Vita game from 2015 for the PC and PS4, featuring extra content. The story concerns the adventures of the X.R.C (Xanadu Research Club), a collection of teens with attitudes (and psychic weapons) who strive to protect Morimiya from whatever the hell is going wrong in the current chapter.

TX is strange game. Some would say lazy, even. Falcom often recycle content to a degree, but TX takes the cake. Close to everything (UI, story structure, engine, cooking system, customization system, a few monsters, artstyle and social system) is taken straight out of their other other RPG, Trails of Cold Steel.

Hell, the cast of that game appear on posters as the characters in an in-universe anime. And the character Towa is just imported wholesale (sans awesome hat). Having played those games recently, it was really weird to take note of all this. It's like a Demon's Souls to Dark Souls deal, expect they didn't import the actual gameplay. There's even a few really obscure references to be had.

The main character Kou has books in his room whose backs feature the sprites of the main characters from Zwei. The muscle man from Zwei 2 is also a figure in a shop. I swear the shops are just real Japanese shops. I mean, I've been to Animate! There's also some footage of Cold Steel 3 on a TV, which teased me something fierce.

Now, Cold Steel already had some Persona blood in it, but tell me if this sounds familiar. A short-haired girl who kicks things. A blond punk with connections to a gang. A pop star with confidence issues. Party members getting the ability to fight after going through personal introspection. A hot springs scene that doesn't devolve into stupid shenanigans and actually furthers the plot.

All this baggage makes it a bit difficult for TX present its own identity, but I still like the aesthetic and presentation. It's sleek and modern, and is overall very relaxed, save for some drama at the end. Not that such a thing is any surprise. This is a Falcom game, of course it ends with a gigantic demon fight in a paralell dimension. As Toshihiro Kondo intended.

One jokey comparison in the game between the current happenstance and D-tier anime stuck with me. TX feels very safe and could've easily been made into a forgettable anime series. That sounds bad, but it's really not.

The mad touch of Falcom is still present, so the worldbuilding is on point. The supporting cast is huge and most of them get a good scene. I Kinda have to have to question why there's a yakuza who looks like the Dragon of Dojima though.

The main cast is pleasant, but plain. Going back to the Persona comparison, none of the characters in TX get any ”shenanigans”-scenes that either make you love them or despise them. No one has a gigantic ”I'm channeling the major theme of the game, look at me!!!” sign on them either, which makes for a nice contrast to Persona characters.

I think the characters are pretty down-to-earth. They go a bit into power of friendship stuff later on, but for the most part, they're pretty realistic. At least as far as anime-coded video game characters go. No one acts unresonably, there's no bickering and everyone just gets along like civilised people.

The plot is pretty simple and the hook should sound quite familiar to anime fans. You play as Kou Tokisaka, a highschooler and survivor of the Tokyo disaster, a gigantic earthquake that brought untold destruction to the land.

10 years later, he goes to rescue a girl named Asuka (who has brightly coloured hair and a rapier...OH GOD!) from some thugs, but gets sucked into another dimension for his troubles.

In this place, dungeon, Eclipse, he awakens his Soul Device (which is basically Ragna's Anchor Gear from Zwei 2) and fights some monsters, demons, Greeds. Asuka mindwipes him in order to protect him, but Kou recovers his memory and teams up with her to fight Greeds and help Morimiya.

From that point on, every chapter introduces some sort of supernatural issue caused by Greeds. After side questing and social linking, you go investigating, dive into dungeons, fight bossses and perhaps gain new party members.

The whole game follows this structure, letting you get comfortable in Morimiya before the heavy stuff drops. I was missing a proper villain for most of the runtime, but the game makes it work. The Greeds are mostly just a vector for whatever character-based issue the chapter revolves around.

Dungeoncrawling On the Go For Fun and Profit

Being a Vita game originally, it should come as no surprise that the gameplay segments are short. In fact, the game ranks you and expects you to clear dungeons as fast as you can. They range from about 8 to 20 minutes in length.

It gels well with the speed of the combat and helps the gameplay stand out where the story cannot. Much like in Cold Steel, the dungeons aren't very complex. It makes more sense here, since it would be difficult to have a fair chance of getting a good rank on the first try otherwise.

As expected of a Falcom action game, the game moves really fast. Regular enemies die in seconds and come lategame, the bosses will kill you about as fast. Movement is on point, giving you a double jump, a dodge, a dash and an air glide.

Actual fighting is extremely proactive, meaning that getting first blood without caring about what a Greed is about to do leads you to victory most of the time. Frankly, all your options combined feels like cheating, especially since the dodge is very forgiving.

The setup is similar to Ys Seven. You have access to 3 characters at a time and you're free to swap at any time. Which you want to do, since elemental weaknesses are important to consider. The main thing to master is keeping the pace up without messing up switching characters.

The game is at its best when it locks you into combat encounters full of enemies of different elements. You then have to make quick decisions while you still have breathing room.

Every character controls the same, but have their own identity. In fact, they're all absurdly fun to use, even the slow greatsword-wielder. Mostly because he murders things so well. Slow characters actually dealing damage is so nice. I wish that was standard. And yes, I am naming names. I'm petty like that.

The names of all the different attacks blend together, so I'll substitute names as needed. The standard combos are nothing noteworthy on their own. They help to refill your stamina meter for more fancy attacks though.

These include air glide attacks, ranged attacks and power attacks. Each have their purpose and they're all useful. Characters usually specialize in one of them. The one with the most obvious purpose is the power attack, which is used to break anti-range shields.

But then there's the super special awesome moves. As you fight and explore, you build up 3 (!) separate super meters. One is for EX attacks, which make you immortal for a fun combo. Another is for...ehh...Union Mode? Something in that direction. It summons your active partner to the battle, boosts stats and gives you infinite stamina. The last one is for the X-Strike, which is a Limit Break.

Honestly, there is little effective difference between these meter moves. All are built up through combat (there are Union Mode crystals scattered about the dungeons as well though) and let you murder whatever's in front of you. And since the game is so easy, it's very simple to just save them for the boss and blast through two thirds of their health at the start of battle. This changes slightly come endgame, but not by much.

On normal and below, healing is effectively infinite, letting you chug potions from the menu all day. On higher difficulties, your stock is more limited, but it's still just a simple matter of pausing the game and chugging the healy stuff.

As previously stated, most of the mechanics from Cold Steel have been imported into TX. The social stuff is simple, but works. The food and customization doesn't work as well due to the change from turn-based combat to action combat. 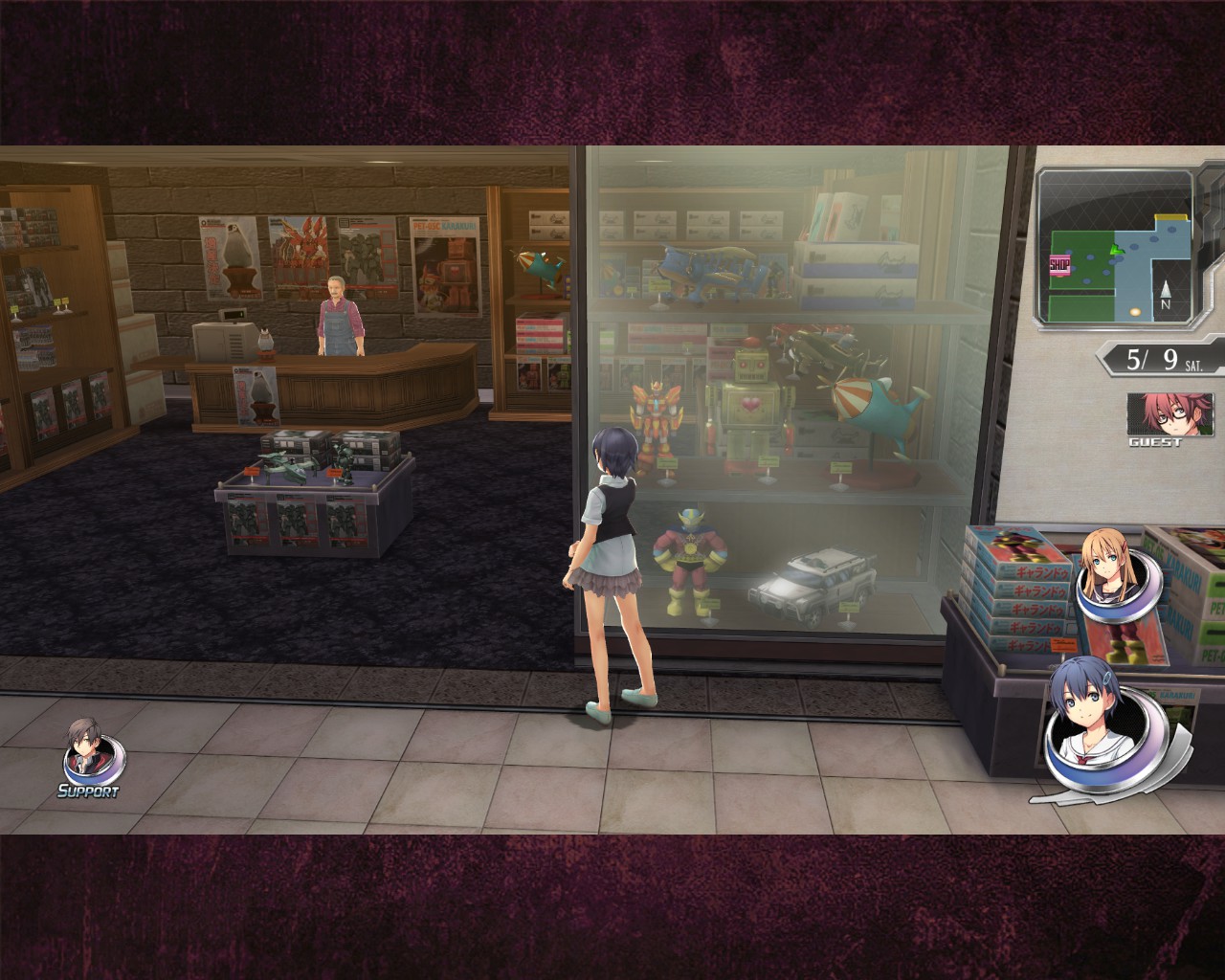 With the addition of skill as a factor, the support effects of food and defensive/status effect stats lose their importance. By just playing properly, you can negate the need for those things and focus all your equipment setups on upping the killtential of characters. I managed some great things once I figured out what matters. You shouldn't give me access to a strong ranged skill with zero startup-frames plus an element that buffs it by 100% at the cost of the other attacks. You're just asking for trouble.

The game also features hidden quests, which go all the way back to Trails in the Sky. It's a real bummer, since Falcom usually have systems in place to give quests, yet arbitrarily hide a few of them in the wild. You can cry replay value all you want, but I ain't stopping using guides until I can trust the game not to have sneaky missables. Especially when you get paid for completing them. Armor is expensive, yo.