“The first minute of this film is a master-work of efficient story-telling. When this film was being made, the studio referred to is as a "requel." Essentially, It's a sequel to Ang Lee's Hulk film, if that movie were actually a good movie.”

Normally I'd let stuff like that go but you didn't even qualify that statement. So now I gotta rip my pants off, flex my abs and break this shit down. Like this.

Shit, this is tougher than I thought.

"They wanted to reboot hulk, but they didn't want to retell the origin story. So they made a montage sequence during the opening credits that tells you everything you need to know about the Hulk. You might also be interested in the alternate opening which was featured on the blu-ray release, just for fun"

Actually all they wanted to do was redo the movie with more mindless action - the big complaint about Hulk (2003) was the lack of it.

"I am in the minority, I know. But I prefer the design of the Hulk's physical appearance in TIH."

You're soo wrong. The CGI characters look like poorly made, cheapo action figures. The best version of Hulk is, and will always be, Lou Ferrigno.

Whattaya mean you stopped serving breakfast after 10am?!

"The MCU films have had some phenomenal casting. This one is no exception. I can't think of a better choice for Thunderbolt Ross."

The better choice was Sam Elliot.

William Hurt is a good actor but you nailed, bro!

"I also adore Liv Tyler (though admittedly, she isn't given much to do in this film)."

Shame she can't act for shit, though. Pouting and acted like a petulant teenager through the few scenes she did have. Besides, Jennifer Connelly is so much better in every regard. Go watch her 'form' in House of Sand and Fog. Seriously, like right now. Fuck this, go.

Usually, yes, but here he is bored to death by his poorly written role. He's totally wasted in this film.

"I also really enjoy Edward Norton. I think he makes a good Bruce Banner. He's not a large person. He's skinny. Scrawny. You would not look at him and think that he possesses world shattering power. They even comment on this in the movie, referring to him as an "unassuming man.""

Norton is a fan of the Bill Bixby TV show so he gets a pass on that front but he didn't really seem to fit or gel with role to me. The studio wanted Norton because he was a bigger star at the time, however the director wanted Mark Ruffalo from the start.

Personally, I have a lot of time for Eric Bana as an actor and as Bruce Banner. I've watched almost all of his films and he's grown from a cheeky Aussie stand up to an admirable Hollywood leading man. Although, he probably was a little too tall and good-looking for the role but he did fine all the same.

I dunno know, think of your own caption, I'm busy 'mirin.

"This film is very well structured. It has three well defined acts, and each act ends in a fight between Blonsky (the villain) and the Hulk. The first encounter is filmed like a spin-off of Alien. Hulk is kept in shadows and steam. He takes people out one by one in a dark factory. At the end of the fight we get one really clear shot of his face, but we never see a full body shot."

They only did that shadowy stuff to save money on special effects. You've given this waaay too much credit.

"The second fight is very different. Blonsky has been given super soldier serum. The military is present in force and is very well prepared with teams, tactics, and weapons. They have a plan. It also takes place in an open field during broad daylight. We get to see Hulk in all his glory."

This second fight was initially disappointing because the version I saw never showed the unedited kick that snaps Blonsky's skeleton like a Kit-Kat. That was true until I youtube'd it. Niiiice! Overall, this battle is fairly decent but mostly rehashed from Hulk (2003).

"The final fight (which I'll discuss further shortly) takes place at night with two Hulks. Each one of these fight scenes is very different from the other. And they each represent an escalation in the relationship between Blonsky and Hulk."

Again too much credit given, but this fight is pretty scary. I'd hate to be out shopping for tinned spam only to get caught up in their scrap.

"Directly related to the aforementioned structure is tension. Tension helps pace the film and keep us on our toes when we need to be. Bruce has a pulse meter on his wrist. It starts to beep as his heart rate increases. When his heart rate spikes beyond a certain point, he will transform. Consequentially, much of our time with Bruce is spent keeping his heart rate down. He is in grave danger of transforming at any moment and unleashing destruction. The beeping is very poignant to the audience. It communicates to us what state the character is in and we feel for him immediately. Bruce doesn't have to tell us what state he is in. The beeping tells all."

This is a really stupid gimmick that makes little sense. The beeper can't tell the difference between increased hate rate from running, adrenaline or stress. Unlike the beeper, the viewer can tell why Banner's heart rate is up so its inclusion is unnecessary and condescending. Imagine if Betty relied on the beeper to gauge Banner's emotional state or was unable to read Banner's body language because she was blind. Oh the terror on her face when Banner does the yawn and reach manoeuvre, or popcorn trick, at the movies.

"Every action movie has a final boss. The Abomination is a great one."

Technically Hulk is on that Super Soldier serum too, it's what he was working on in the lab when it got showered with gamma radiation and mutated into something more potent.

HULK STRONGEST ONE THERE IS! 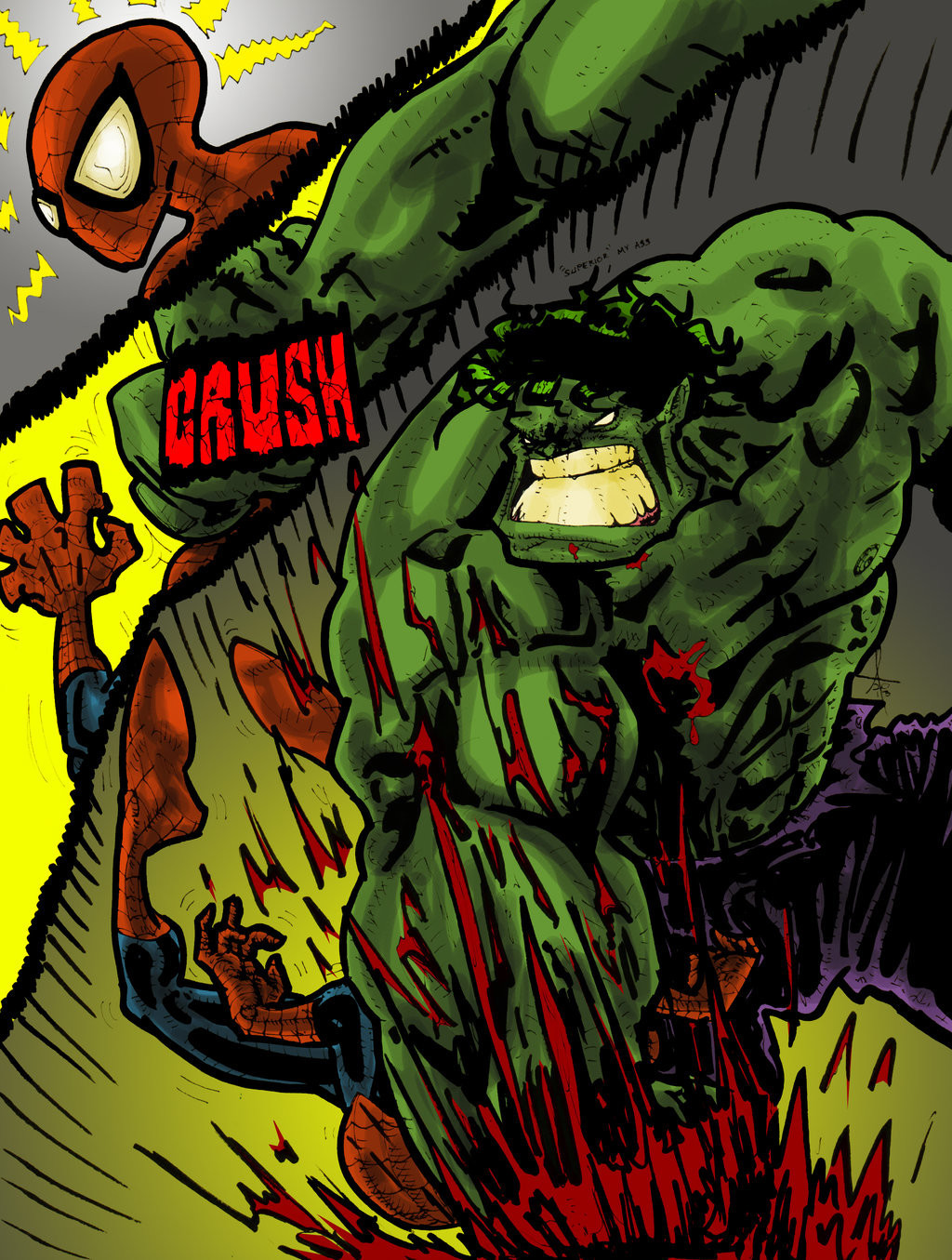 "For the first two thirds of the fight, the Abomination has the upper hand. Fortunately, Hulk has practice. He's been the Hulk before. He also has one thing that Blonsky doesn't: love. Cliche, I know. But it works in the context of the film. His love for Betty is the most powerful motivation of all. When she is in danger, Hulk kicks into high gear. We are then introduced to two wonderful abilities that (to my knowledge) have not been shown in film since. He claps and unleashes a hurricane force wind, extinguishing a fire. Then he uses his trademark Hulk Smash, cracking the earth and knocking the Abomination off balance. Of course, the Abomination gets in some great hits of his own. He uses large cement blocks on chains as a flail to great effect. I would also like to highlight that Hulk uses objects in his environment as powerful weapons. He rips a car in half and uses each half as boxing gloves, for example."

This is another thing that does not make sense to me. A bullet can penetrate a car, but we see in the film they cannot pierce through Hulk's skin. So Hulk's skin is more stout than metal, so what's the darn point of using the car as boxing gloves? Hulk rips through the vehicle – and most things in the comics – like a hot knife through butter. Would you coat a knife with a layer of butter to make it stronger? Right. It's stupid. He's far more stronger and durable than most metals and he regenerates (roughly as fast as Wolverine), may as well wrap his mitts in tin foil for all the good it'd do.

"All around, this film shows what the Hulk is really capable of in combat. I don't feel that any of the other films have done this quite as well (though Ragnarok comes extremely close)."

I guess. Hulk (2003) did a fairly good job of showcasing his strength and prowess, just not often enough for most people's liking.

I enjoyed Ang Lee's Hulk because it was more cerebral, taking into account some of the psychological and physical trauma aspects from the comics that Robert Bruce Banner suffered from, thanks to his abusive father Brian Banner, and how it affected him as a man and the monster. There's more to Hulk than just “smash”.

This falls in line with Marvel's current attitude towards character developement as showcased in Avengers: Infinity War. Maybe one day we'll get to see more about Banner's MPD and his transformations into Guilt Hulk or even Devil Hulk, perhaps even my favourite version from a alternate future reality, the Maestro.

I would like to go into a lot more detail about why I like Ang Lee's Hulk but no-one is reading this so I won't bother. TTYL.

(This is just a silly rebuttal to a subjective thing. Both movies are flawed but are enjoyable. You could just substitute Hulk (2003) for Hulk (2008) in GreenHornet's review and you'd pretty much have my opinion in a nutshell.)