Given my previous posting regarding the ranking of the God of War series in its entirety heading into this launch, it should have been absolutely no doubt that I would be posting my opinions, impressions, and eventual review of the game.  And as the God of War fan that I am, in no certain terms was there any way that I was letting the Stone Mason Collector's edition pass me by.

So, without further ado, I present to you the Stone Mason Edition of the game. 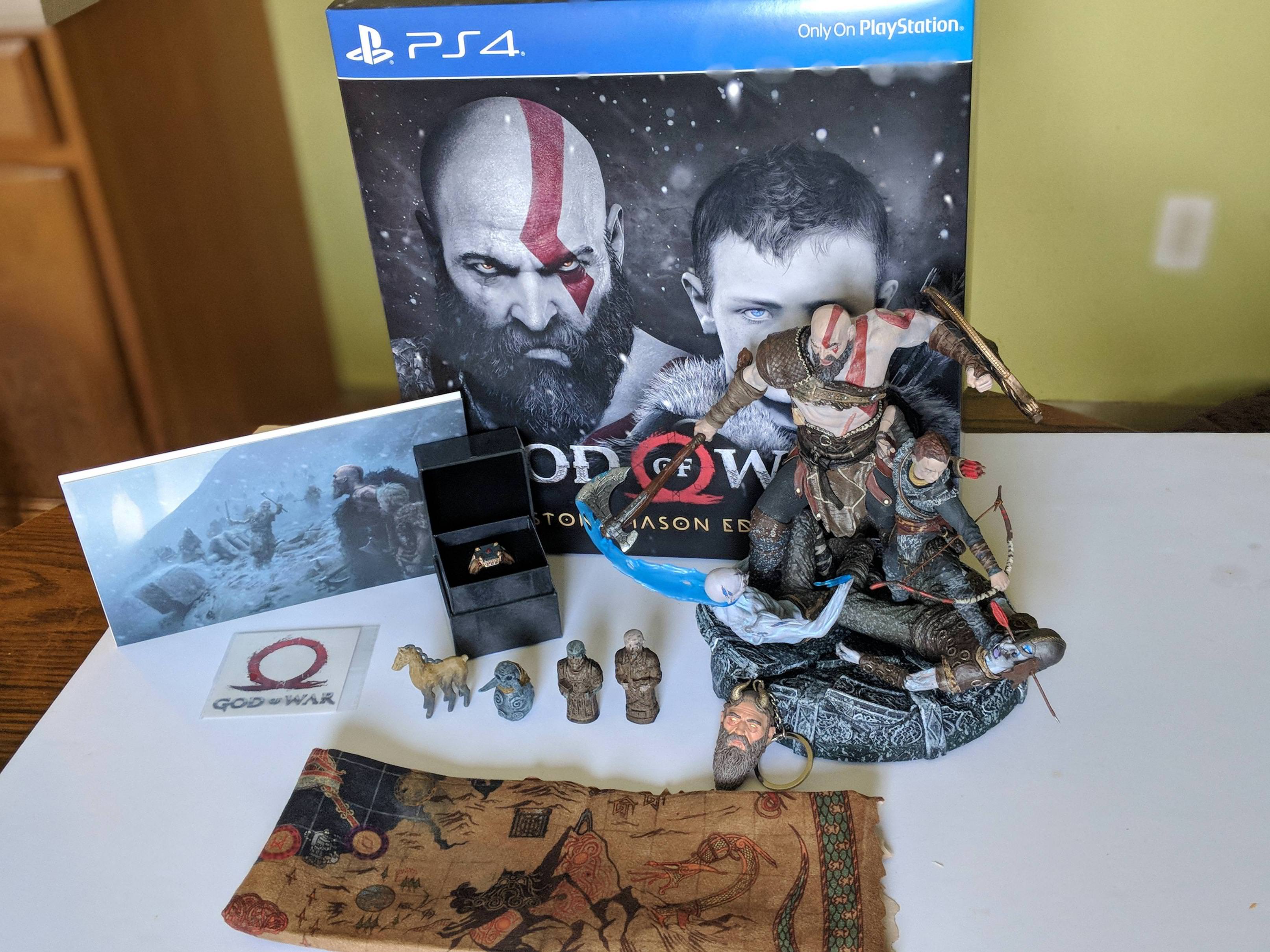 The crowning jewel of this edition is obviously the ferocious 9" statue of Kratos and Atreus produced by none other than the famed sculptor of many pop culture icons captured frozen in three dimensions, Gentle Giant Ltd.  The retail price of the Stone Mason Edition was $149.99.  With 60 bucks accounting for the game itself, it's likley that the remaining $90 of the retail price is going towards this statue and the assorted trinkets.  With that being said, I'm going to discuss this edition with the basis that everything else (excluding the game) has a total retail value of $90.

I've purchased many statues and highly detailed figures in my time as a pop culture fanboy of sorts, and I can say that statue quality usually always coincides with the price.  If we were to remove the other pieces of this collection from the reamining $90 value, I'd estimate that this statue would sit roughly around $70.  That's right, it is my view that the remaining pieces to this collection likely hold a total retail value of $20.

So the question remains, is this statue the quality of a $70 statue?  I believe so.  The paint job isn't the kind of detail you'd find on a $200 Hot Toys figure, but it is certainly on point with regards to the features of Kratos and Atreus.  As you can see, they certainly look like their video game counterparts.  Check it out. 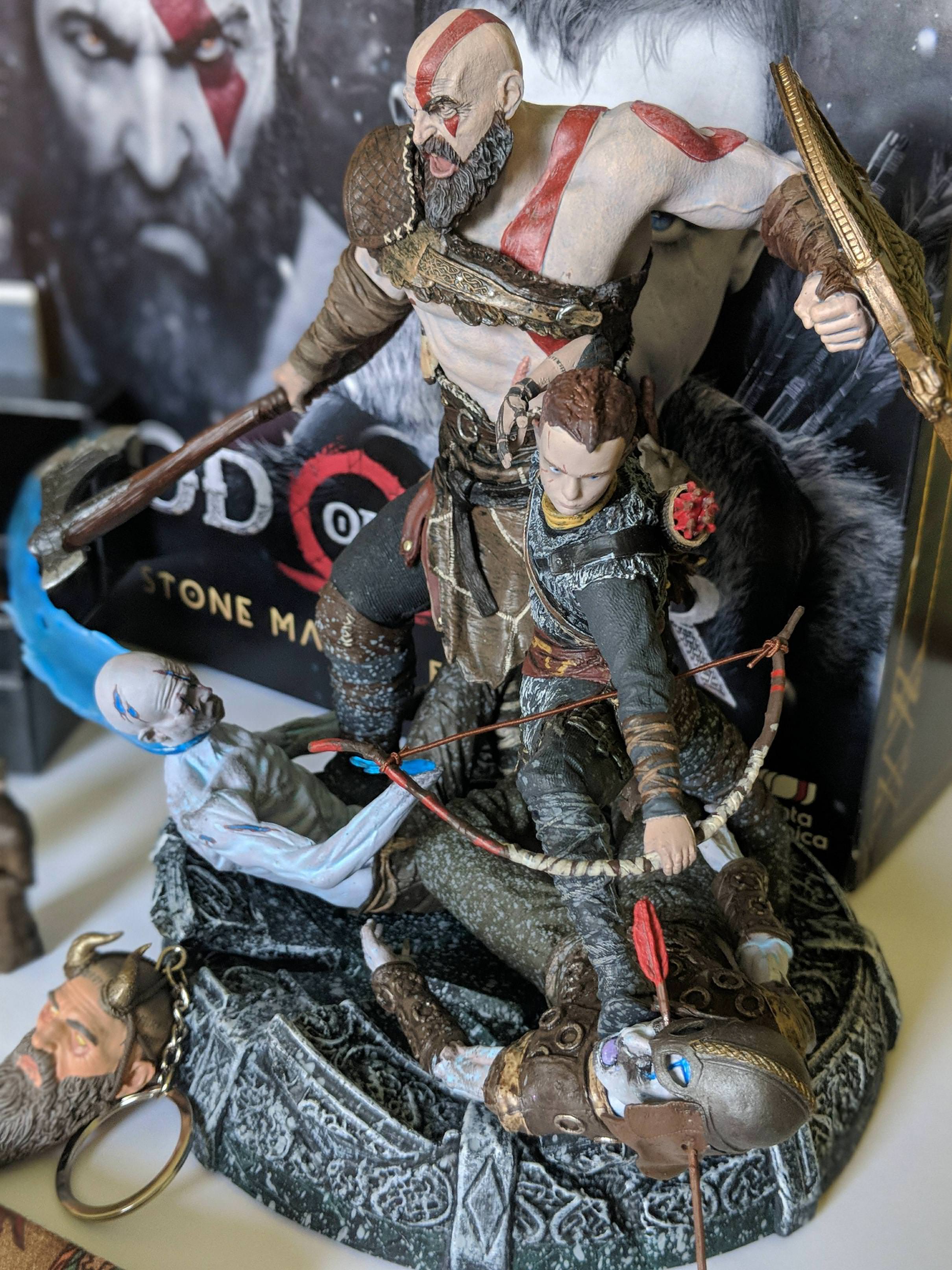 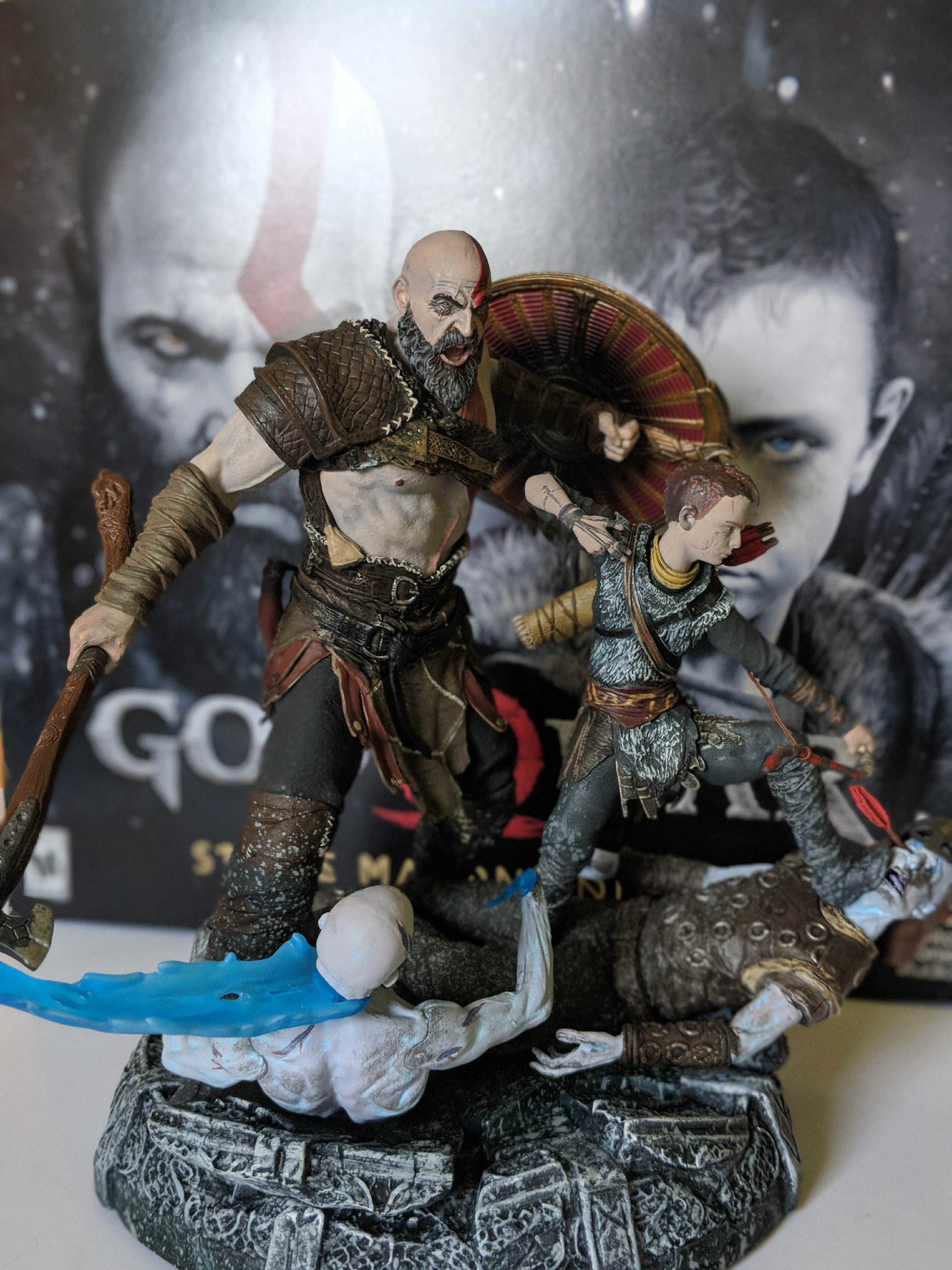 Since, this is the prize (in my opinion), everything else is just icing on the cake.  Four 2" carvings are included: a troll, a horse, and the Huldra Brothers.  The lithograph, sticker, and cloth map also make for some fun, added features to this collection.  You also will receive the opportunity to feel like Kratos as you can carry Mimir's head on a keychain!  With the press of a button, he will talk and spout his wisdom just as he had done in ancient Norse mythology and in this game.  And, last but not least, if any of you are looking to proposition marriage to a significant other with enormous hands, then look no further as you can do so with the Stone Mason ring.

Each of these added pieces are crafted well, and definitely made me smile as I studied each one.  However, like most gimmicky pieces, I packed them away with the box... except for Mimir, that dude definitely went on my keychain.  Odin would be proud.  Other items, that are not on display here include the steelbook and the digital content (The Art of God of War and the God of War issue #0 comic from Dark Horse). 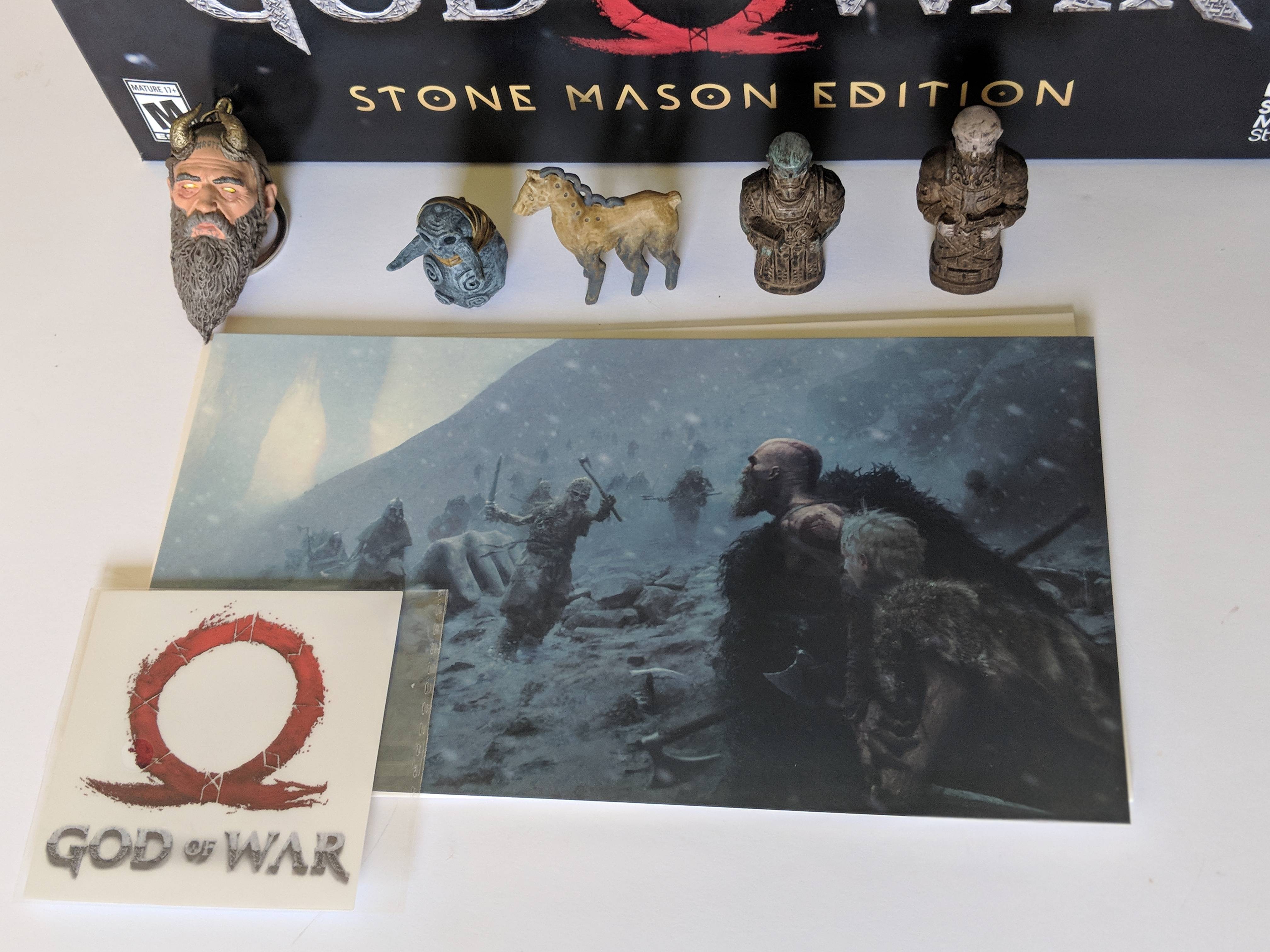 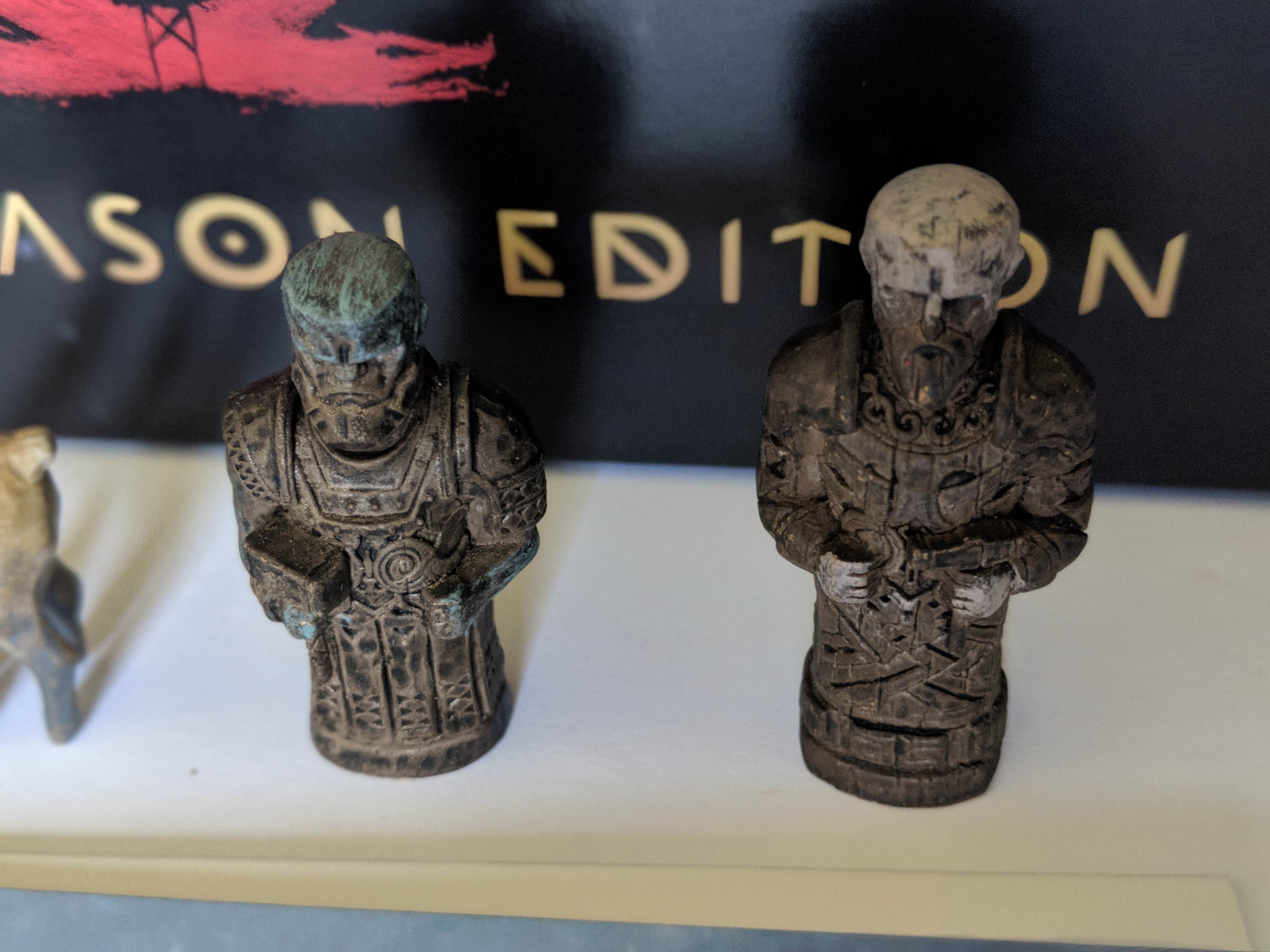 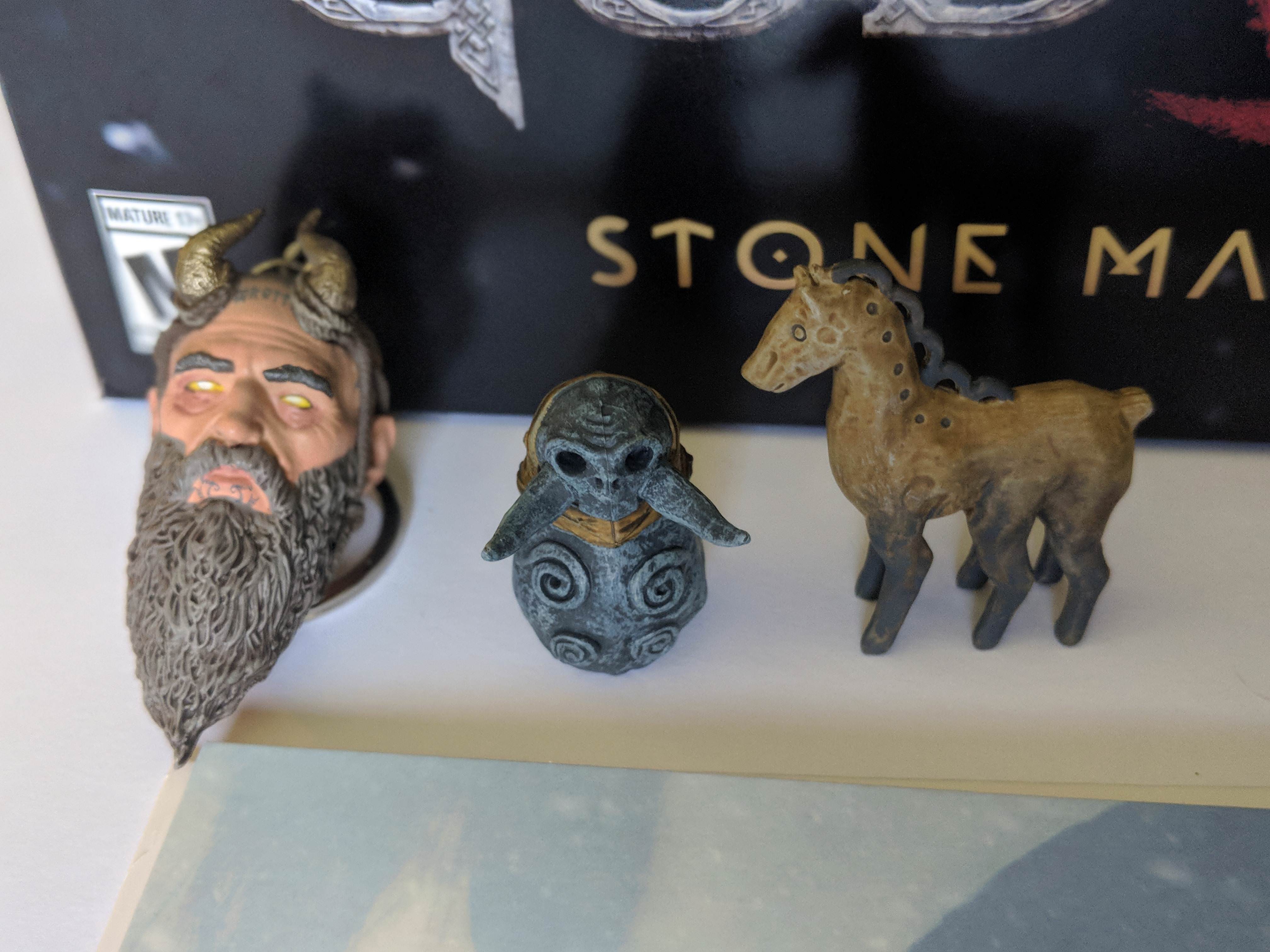 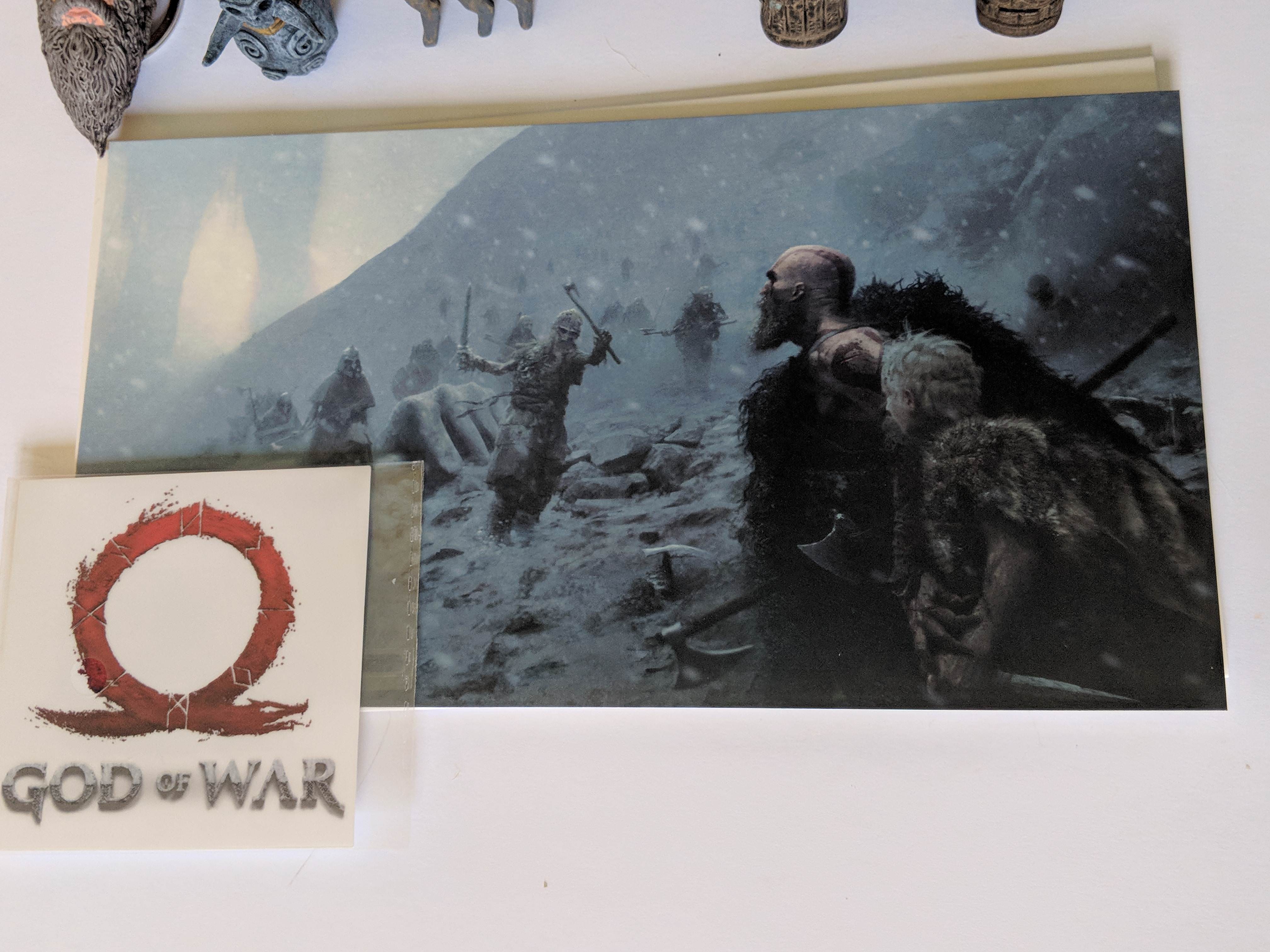 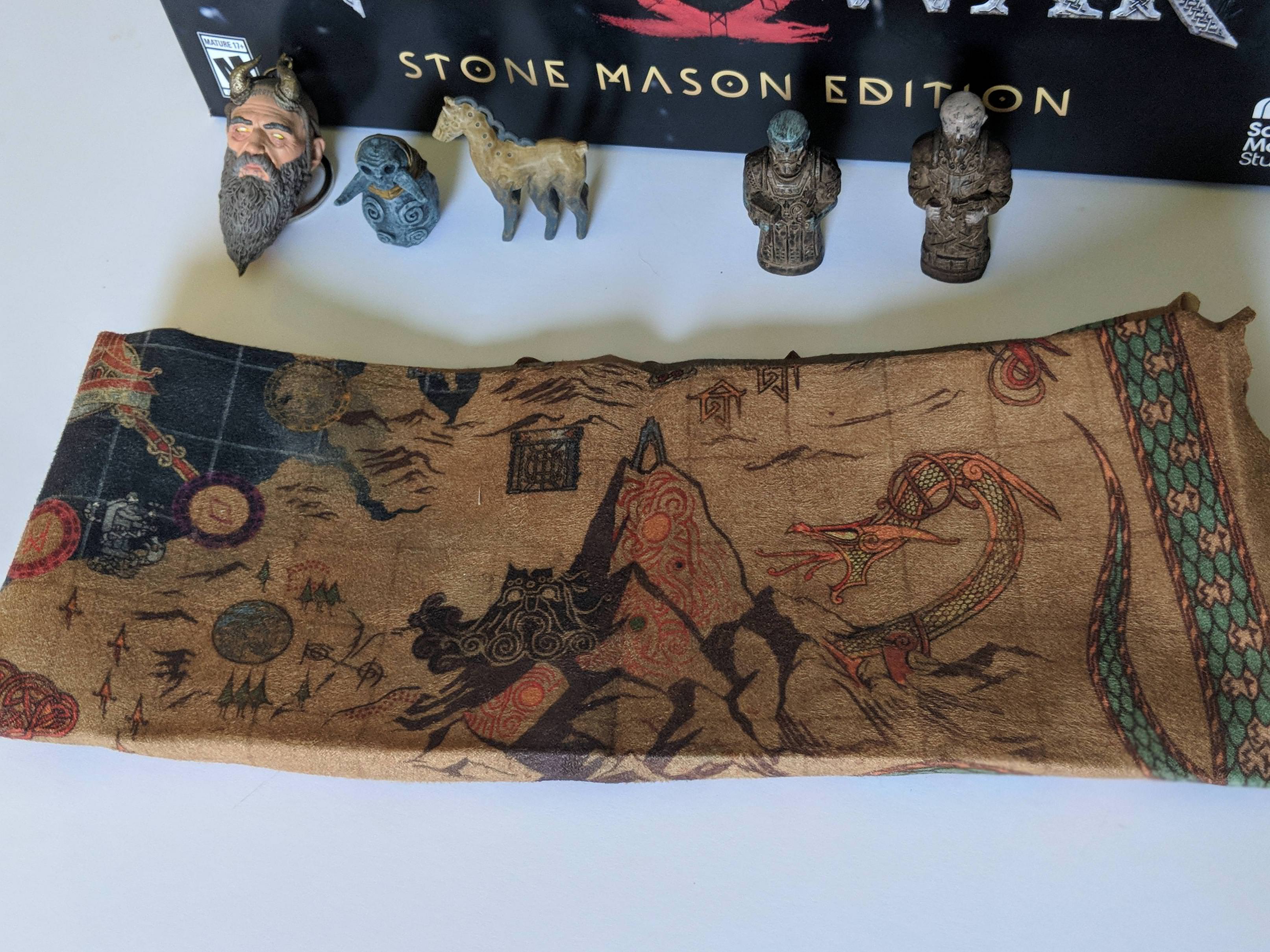 Within in the first hour of gameplay, I found myself picking my jaw up off the floor.  The world is breathtakingly beautiful.  The character models for Kratos, Atreus, and the enemies are superbly well designed.  The combat is completely fluid, aggressive, and fun.

What is entirely impressive and already apparent to me, is that this God of War successfully refreshed a combat system that felt worn and tired after six entries, while still keeping the core DNA of what made God of War's combat... well, God of War.  Hack n' slash, parrying, defense, and dodging are still major staples of the combat in this game, but are presented much differently.  The ability to control the camera has, in itself, been the major cause of this change.  Furthermore, the presentation of health bars and the RPG element of enemy levels allow the player to strategize an encounter.  Throwing the Leviathan axe, is extremely addicting and never gets old.  Recalling the axe is even more addicting.  But utilizing the axe to strategize combat is another major element that differentiates this entry in the series from its predecessors.  For instance, I might throw my axe at a brand new enemy with a full health bar and leave the axe buried in his flesh effectively stunning him for a period while I pummel another near-dead enemy with my fists to knock him off my radar.  And this is just the very basic stages of strategizing combat early in the game.

The story is already captivating.  From the get-go, the audience is left with questions and mysteries that are beckoning to be answered.  I can't go into detail here without spoiling the introduction to the game as well as the first boss fight.  But let me tell you, the introduction to the game and the first boss is even something that you don't want spoiled.  It's harrowing to say the least, and I can't wait to play more.  It's so easy to feel a bond with Atreus as a character and as a son and not some nuisance who gets in the way or spews irritating dialogue.  Atreus is an asset in a fight, and he is the one who carries the depth of the story.  He asks the questions that need to be asked.  He tells the myths and the stories that need to be told.  He lays the groundwork for the mythology of this era, and without Atreus, this game wouldn't be nearly as successful as it has been.

There are four difficulty settings to this game: Give Me a Story, Give Me a Balanced Experience, Give Me a Challenge, and Give Me God of War.  From the description of these settings, it's obvious that these options, to put them in layman's terms, are as follows: easy, normal, hard, and very hard in that order.  I selected 'Give Me a Challenge' and give me a challenge it did.  Death and I have already become acquainted several times even as I encountered the very first enemies of the game (Draugrs).  After becoming familiar with the combat (through a handful of deaths), I finally got the hang of it and have been able to muster forward.  The game is difficult on this setting, but it's right where I want it.  It's not impossible, but it may take some work.

Already, with just five or so hours under my belt, I can't recommend this game enough.  I'm excited to see where the story takes me, but even with that aspect aside there is pure fun to be had here with an addicting action game at the heart of this title.