So, I wrote a feature for GamingBolt a while back and the video affiliated with the feature has recently been released. When I was looking through the comments I realized how many people were talking about Kingdom Hearts, whether it was KH1 or KH2. They were spouting out how some varient of the KH series deserved a spot on that specific list; Top 15 Best PS2 Games of All Time. Now, given I enjoyed writing my "The Sims Legacy" post, I thought I would write one for Kingdom Hearts since that was another series I fondly remember.

We'll start with talking about the company that created this wonderful series.  Kingdom Hearts was developed by a Japanese game company called Squaresoft, which is now known as Square Enix. Square was founded by Masafumi Miyamoto in 1986 within Toyko, Japan. Prior to developing and publishing the Kingdom Hearts series, they were most well-known for Final Fantasy, Chrono Trigger, and Super Mario RPG in 1987, 1995 and 1996 respectively.

One day, upon talking about Super Mario 64 an idea sparked that eventually led to the development of Kingdom Hearts. Now, because Square and Disney once shared the same building in Japan, they had the opportunity to pitch the idea to them, because they knew at the time, only Disney's characters could possibly compete with Mario. The pitch was said to have been in an elevator but, that's just a rumor and whether it's true or not is fairly up in the air. Personally, I don't fully believe it but, I want to because it would be amazing to think that this series started in an elevator.

In 2002, Kingdom Hearts was released to the PlayStation 2. Now, the story is convoluted at best, but I'll try my best to allow the reader to understand it - if for some reason - you don't know of the series. Kingdom Hearts follows Sora, a 14-year-old boy who was chosen to be a wielder of a magical item known as the Keyblade. This item allowed its wielder to defeat the darkness in peoples' hearts, which have manifested into creatures known as Heartless. You are to try and reunite the protagonist with his friends; Riku and Kairi, who had disappeared into different worlds, most of which were worlds housing characters such as Jack Skellington, Ariel, Aladdin and more. It also featured characters made for the game and characters from the Final Fantasy series.

The game quickly grew in popularity, leading it to become a critical and financial success. You can't blame people for loving this game, though. It was unique from the rest, it had some of the most pleasing music to listen to, the characters were pretty likable, and, of course, the developers were Squaresoft who were already - as said before - well-known for their other fantasy-based games. 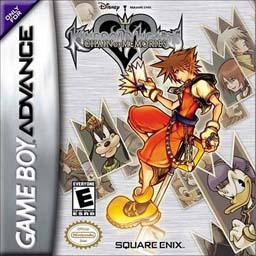 Now, the story follows Sora right after the events of the first game. The player is once again in search of his friend; Riku. Sora was directed towards what is known as Castle Oblivion, a castle where the deeper you go the more you forget but, the more you remember. As the player traverses through the castle they will encounter hooded figures that are a part of a group known as The Organization.

The game wasn't as lucrative as its precursor, but it was still quite popular in Japan and the US. Its card-based combat was subject to both criticism and praise depending on who you talk to, its story was nice and the FMV was subject to praise. It also sold around 104,000 of copies in its first forty-eight hours in Japan.

In 2005, Kingdom Hearts 2 was released on its home-console; the PS2. For those who hadn't played Kingdom Hearts: Chain of Memories, this might have seemed like a long wait and an abrupt, confusing opening to the next of a series. This is because you do not take control of Sora at the very beginning of the game, rather you take control of Roxas, a boy who looks eerily similar to Sora. But, that's for a reason; Sora and Roxas are connected. You see Roxas is Sora's Nobody. What is a Nobody you ask, maybe . . . probably not. Well, you're hearing it anyway . . . unless you scroll down and skip this. Anyway, a Nobody is the soul and body of a strong-willed individual that has lost their heart. Now, let's assume you know what happened by the end of Kingdom Hearts, you'd know why a Nobody was created for Sora.

The game takes place a year after the events of the first game and Chain of Memories. You take control of Sora after the tutorial level. After being in a stasis for a year the player is tasked to go on another adventure to find Riku and Kairi all the while trying to figure out what Organization XIII has planned. You are introduced to new characters and new worlds to "explore", such as Pride Lands (The Lion King), Port Royal (Pirates of the Caribbean), The Land of Dragons (Mulan) and more.

This was something of a game to look back on, for me at least, as this was the game that brought me into playing the Kingdom Hearts games, albeit I still have yet to complete all the games. Kingdom Hearts 2 had just as good music and slightly better graphics, better voice acting, and the models used in the Port Royal world were a well-done attempt to emulate the Pirates of the Caribbean style. My favorite world, though, has got to be Timeless River mostly for the art style.

The game meshed the combat system of Chain of Memories and the graphics of Kingdom Hearts. It also utilized the "Reaction Command" that was introduced in Kingdom Hearts 2. Generally speaking, it was received well, then again, all it was meant to do was bring the game to the console and let more people experience the in between events of one and two. It did it well and also fit in its own flair with extra cutscenes and battles not included in the original.

In the following year of 2008, Square Enix fell into creating a mobile phone game. This resulted in Kingdom Hearts: Coded. Now, you'd be forgiven if you never heard of KH: Coded, mostly because of its exclusivity in Japan. Coded takes place following the events of Kingdom Hearts 2. After Jiminy Cricket sorts his journal entries out, he finds a line he did not write and to investigate King Mickey went into the digital world, causing a false Sora to appear known as "Data-Sora".

The game was a puzzle game with action elements similar to its precursors. It also combined 3D backgrounds and 2D character models which was different. It was released in an episodic form; providing one episode per month. Though it was heavily linked to another game in the series that we'll get to soon enough, because of this link, Square Enix worried the ending of the game would be spoiled, so they released the final chapter in 2010 after the release of the game. Coded had well-done graphics that, despite it being a mobile phone game compared to higher grade, dedicated handhelds like the PSP. 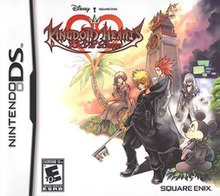 In 2009, it was finally time to show the world what was going on before Kingdom Hearts 2 began. Kingdom Hearts 358/2 Days takes place near the end of the first game and during Kingdom Hearts: Chain of Memories. Instead of taking control of Sora, the entire game is put in the perspective of Roxas as he goes through his days as a member of Organization XIII. Being the new guy Roxas was trained by a majority of the members and was more often than not eating sea salt ice cream with Axel after, at LEAST every other mission.

The game was released to the Nintendo DS and featured a similar combat style that you'd expect from a handheld variant of a Kingdom Hearts game, but with a more hack-and-slash undertone as most any mission you are given has you fighting a decent sum of enemies. You also have to customize your character's ability slots as specific spells or abilities will not work if you do not have those slots available. The game also added Limit Breaks, which was a feature originally from Final Fantasy.

There's more, but this has been going on for quite a while, so I decided why not make a part two from 2010 and beyond? I hope you enjoyed this entry to my "Legacy" series of posts. Don't worry, you won't wait long for part two. I'll be sure of it.