Gungrave is a character action game by Red Entertainment released for the PS2 in 2002. It depicts the revenge of the resurrected super zombie Beyond the Grave (sic) against his former coworkers in a crime syndicate, who've created an army of monsters.

The plot, as provided by the game, astounds me. Some girl named Mika brings Grave his guns whilst bleeding out, which is apparently code for ”start your rampage of revenge now”. I wouldn't question the start of the game if it wasn't so sudden. Grave doesn't ever speak and you're given NO establishing information to stand on.

You're just supposed to start shooting. A few more tidbits are given as you go on, but it's far from a decent story. You're given chance to speak to Mika and the doctor that resurrected Grave, but that goes to shit two stages in when Mika gets kidnapped and the doctor dies.

The worst part has to be how cheap the story content in the stages are presented. The cutscenes introducing bosses are 30 seconds tops, and the earliest bosses get like 5! Try as you might, you're never gonna get a characterization of Bob Poundmax (sic). Except that he's fat, of course.

Once you get to the final stage (which doesn't take long sinc the game is like 1 & ½ hours long!), what little sense the game had just dies. You get a little bit of information to justify Grave's revenge and Mika's existance in the plot, but it's only like 15% of what's needed for a complete story, even in an action game like this. 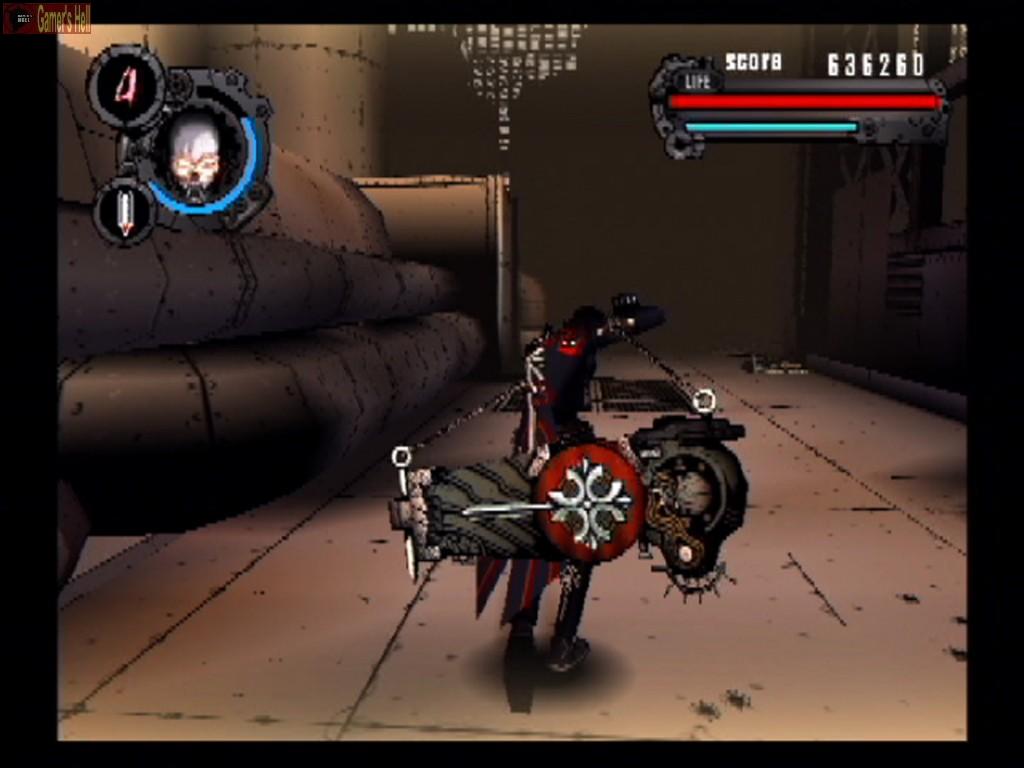 You fight one of the Syndicate bosses (who regens after hiding behind cover!) and then ride on a magic elevator into the sky! I'm not kidding. And up there, are some weird building-like objects to stand on, magical staircases and blob monsters to fight. This is never explained

And just when it can't get weirder, you find Harry, the boss of the Syndicate, who has mutated the old boss into a fucking Megaten demon that you need to fight! Afterwards, you just shoot Harry. Grave and Mika drive off after that and the game quickly ends!

That all sounds horrendous (it is), but someone out there had a vision. Which is why the anime adaptation is somehow frikkin' amazing. It's about 90% backstory and underplays all the ”hardboiled anime action” elements as much as possible. It's instead a mafia crime drama full of awesome character moments. And once it gets to the climax, it only takes a scant few things from the game, which thankfully doesn't include Harry's sky...fortress? Buildings? Middle finger to God?

Just watch the anime and forget that the game ever existed. Dubbed too, the cast is great.

This Is Not The Action I Wished For

I dislike the genre term Hack & Slash. It's illdefined (apparently, Diablo and God of War are both Hack & Slash games) and often dismissive of a game's combat system.

With that in mind, allow me to declare a new genre. Let's call it Spray & Pray. Games in this genre are shooters where skill was never a consideration and you simply walk forward. A walking sim without any pretense of being designed by capable hands, if you will.

Now, you can proba...YES OF COURSE I'M TALKING ABOUT GUNGRAVE, JESUS FUCK!

This game is unbelievable. It bears the skin of a character action game, but inside, it's just a sack of maggots. Grave is only a bit more mobile than a tank, but the designer actually tried to balance this out. So you have an extremely forgiving regenerating shield!

Regular enemies cannot touch you. The only thing that threatened me was whenever I didn't notice enemies spawning behind me continuesly! This, IGN, is what shitty enemy spawns are like, screw you for disgracing God Hand's name over this!

And the actual shooting is as mindless as you can make it whilst still requiring input. Just holding shoot makes Grave kill anything in sight within seconds. That's the game!

Save for when missiles make their rare appearance or when you want to focus fire on a boss, you don't need to do anything else. There is a melée attack, but it's useless. And when you shoot enough, you earn Demolition shots.

These are super shots that are useful in perhaps half a dozen scenarios. Spending them on health is probably the better choice, unless you actually care about comparing high score with your friends. That hasn't actually happened, right? There can't be a Gungrave high score competition out there. I refuse to believe it.

The bosses are the most interesting part of the game, but they are still very short and simplistic. I think it's here that the game comes closest to realising its stylish intent. You have to read movesets and jump out of the way in order to stay alive. But even so, boss attacks are very simple and there's no skill in landing hits, so it isn't fun, save for maybe the cool designs. Which were reused in the anime to tremendous effect.

And just to cement my displeasure, the game always fails once when saving to my third party memory card and I couldn't save clear data at all. Can you believe they somehow made a sequel to this game!? And God Hand got none! It's so unfair.