Traveller In Playtime - Devil May Cry 3

Devil May Cry 3 is a character action game released by Capcom on the PS2 in 2005, and was later remastered for PS3, Xbox 360, PC, Switch, PS4 and XONE. It's a prequel to the first game, detailing Dante's awakening as a demon hunter and his conflict with his twin brother Virgil.

A Tale of Two Sons

I'm practically floored with how good the story of DMC3 is. It isn't complex, but damn if it isn't a satisfying plot told well. The joy begins with Dante, who is a delightful and carefree punk in his young age. He spends the opening trying his best to protect his pizza from demons in the most ridiculous fashion and I love it.

And unlike many games that let up the budget after the opening, DMC3 is a thrillride from start to end. There are some quiet parts during gameplay, but just about every mission has a cutscene with crazy and/or hilarious acts of combat prowess where you can just hear the screenwriter laughing about getting away with it all.

Dante destoys his shop with a sneeze, rides a bike UP the side of a tower and plays his own battle music on a demonic guitar! It's frikkin' rad. I challenge any fool out there to convince me otherwise.

For contrast, we have his brother Vergil, who is serious to a ridiculous degree. The game is structured so that you fight him at the end of every act. It's a great idea. He gets harder as you go on, ending in an amazing battle between the two brothers.

I think that's enough about the plot, but if you want to know more, I recommend this video. Just know that it's the story is amazeballs. That is all.

This Combat System Is Getting Crazy

Itsuno, you deserve a medal. How the hell you can go from the trashfire of that-which-shall-not-be-named-again-because-it's-goddamn-terrible to this masterpiece, I don't even want to know. Close to everything is just...correct.

Let's start with the fact that the game is ball-bustingly hard, even after the special edition restored normal difficulty. Enemies are varied and actually try to kill you. That sounds bad, but that means that they are almost always close by, ready to be styled to death. 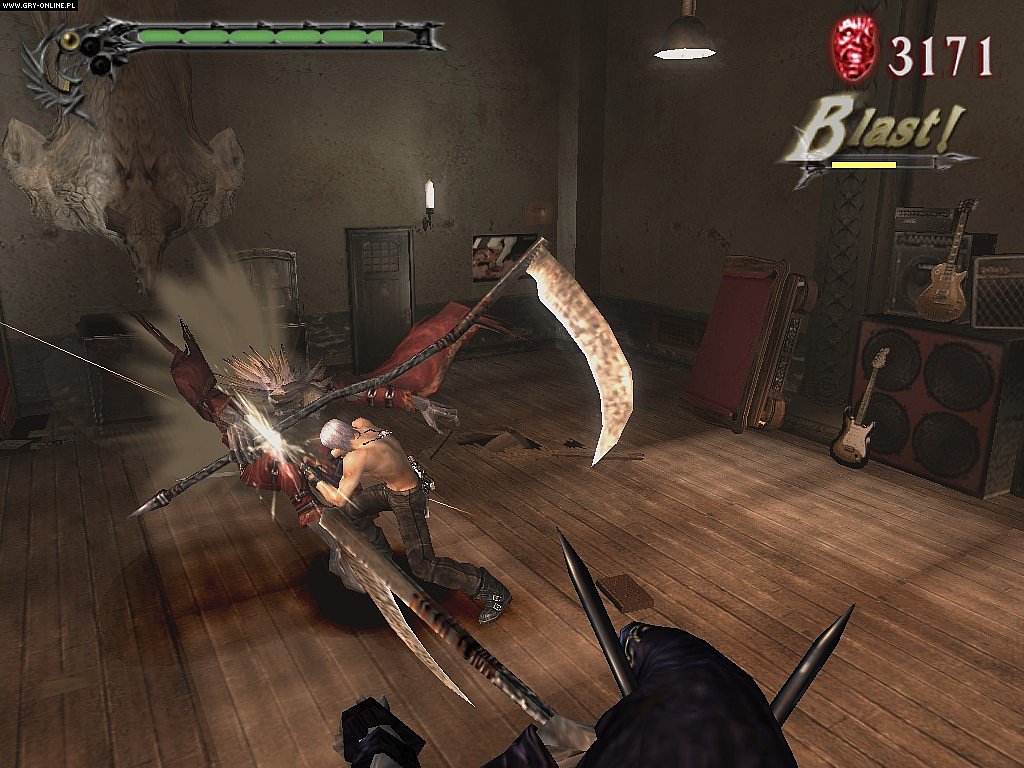 And style you shall, as the new style system is just begging to be mastered. Dante has 4 main battle styles and 2 support styles to his name. Each one is governed by the circle button and modifies your combat abilities greatly.

Trickster, which augments movement, lets you dodge with ease and manipulate elavation. Since the camera is pretty good for the most part, I haven't found myself using it that much sadly.

Royalguard, on the other hand, is just beyond me. It lets you block (which is frankly stupid due to the damage that bleeds through), but its main purpose is the parry. This crap is only active for a few frames and you need to be nearly perfect. The payoff is that you look awesome, take no damage and build up the rage meter. Unleashing this meter is probably the strongest attack you have, so it's worth mastering. It also has some fun bonus defence moves, like an anti-projectile parry with kinder active frames. If you're insane, you can also use the counter to burn your rage meter with precise timing to utterly murder bosses.

Now, the other 2 normal ones are the ones I really like. They're simple, but with so much potential.

Gunslinger augments guns (duh), meaning you get access to faster shots, charge shots and some actual moves! This gives you options at range, which you can use to make some really interesting combos.

Swordmaster's purpose can probably be gleaned from the name, but just to be clear, it grants your melée weapons an extra 3-4 moves, which doesn't sound like much, but most of them rounds out their movesets and cover weaknesses.

The last 2 are quite one-note and magic hungry, so I haven't played with them much, but they're really cool in concept, so I can't help but like them.

That's what's new, so what's old? Timing-based combos and the taunt, that's what! They're back and better than ever! And just for the sake of stylishness, the taunt changes depending on your current style rating. Hell, even the style rating has gotten a facelift!

It tells you when it's about to go up or down and it's even nice enough to stay at a low rating for a while if you're not fighting, making it easier to bounce back and keep a decent combo going. This puts guns in a good place, as they really help with keeping a combo.

The weapon system has changed for the better as well. You get to pick two melée weapons and two guns and you have the freedom to swap between them instantly. This opens up so many possibilities and raises the skill ceiling severly.

The Devil Trigger doesn't give you many moves, but you very much need it to even the playing field. And due to the improved taunt, keeping your magic up isn't that difficult. 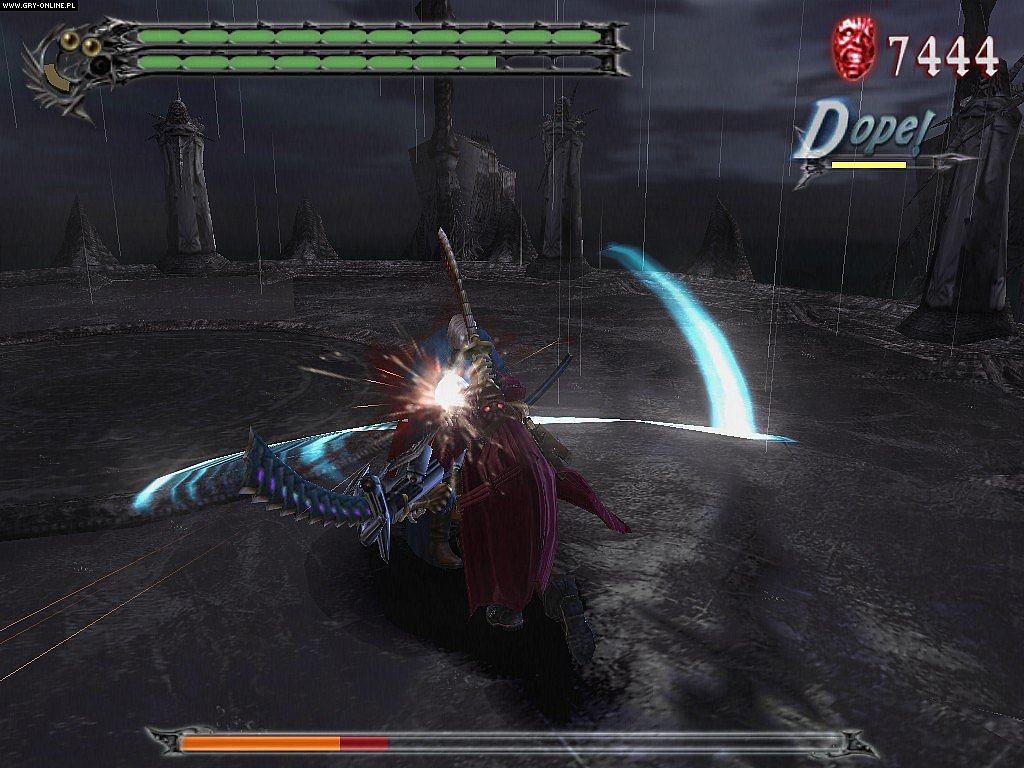 There is a light elemental system that gives you a decent boon against some bosses depending on what weapon you use. It's useful, but not completely vital.

This all comes together to some utterly radical combinations. Wanna stunluck enemies with nunchucks while charging a lock-on laser? Wanna pin an asshole demon with your sword as you slash it with your other swords? Wanna dash around whilst spamming a sniper rifle? Wanna rain death with an electric guitar? Wanna punch spiders in the face?

DMC3 has a few different types of upgrades. Guns are the most boring, only increasing in damage or projectile count. Melée weapons let you unlock more moves, as expected. The standout are the styles, since you need to level them RPG style. It all works pretty well, but you really need multiple playthroughs to max out everything.

Blue orbs can be a bit evil, but since you can finally replay missions, it's not that bad. Secret Missions are pretty cool in design. They often try to teach some skill in an interesting fashion. You can usually clear them as you find them, or cheese them later with a special ability.

DMC3 is a bit unique in the series, there are just so many bosses to fight! Not all of them are complete winners, but they're all varied and Virgil is the only one you have to fight multiple times. The boss rush is designed so that you only need to refight a few of them, which is very welcome, since you can choose your favorite fight again.

DMC3 has some awesome extras in it. After you beat it, you can engage in the Bloody Palace, which is a gigantic arena full of enemy configurations not found in the game proper. It's a good challenge and really makes sure the game gets good use out of its enemies.

And added in the special edition, there is the ability to play as Vergil. It's not a new story mode, it's simply a rehash of Dante's adventure (with a recoloured Virgil to fight) where you get to play around with Virgil's moves. 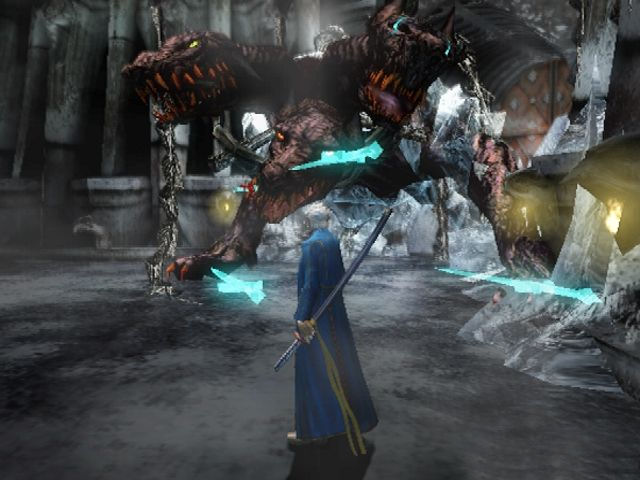 It's pretty awesome. He only has one style, which focuses on mobility, but his summoned swords make him quite different from his brother. Magic can be used for the special attacks that he uses in the boss fight and all his weapons are solid. The only faults are that some secret missions are much harder and that there isn't a proper Dante fight.

In the PC and HD versions there's also a Turbo mode which speeds up the game, in case you wanted to die even faster.

As if DMC3 hadn't given enough already, the game is has a few fun secrets as well! There are some hidden moves, starting with Crazy combos. They're actually listed, but FEEL kinda secret. If you mash attack hard enough after certain combos, you'll extend them and probably cause Dante to do something silly.

The actually hidden one is where you mash gun attacks when near a downed enemy in the Gunslinger style. Dante will shoot them in the face and them kick them away in a satisfying fashion. Or if you're an asshat, you can slide around on them and and shoot in random directions as Dante spins around! It's fun. So is the DT explosion.

But the best secret has to be the hidden multiplayer mode. I'll leave that one for you to find. You only have to give the game a chance.