Zelda Games - Thinking About the Timeline

For years, especially since the release of Nintendo's controversial Zelda timeline in the Hyrule Historia (https://zelda.gamepedia.com/The_Legend_of_Zelda:_Hyrule_Historia), the idea of Zelda games sharing a lore connection has been dismissed as ridiculous or silly.

Just today, sparking this very blog, I saw this meme being shared on Twitter (from user @brOrayn - who I otherwise know nothing about):

The "punchline" is that Nintendo "retconned an entire timeline into a series that was obviously not meant to have one...." This tweet has almost 9,000 likes and almost 5,000 retweets. Needless to say, this is both a common perspective and a popular one.

And it's, at the least, misguided.

Let me be clear about my views and my intentions. First, I don't plan to defend the Hyrule Historia timeline or to craft any sort of alternative. I'm not a nut. Second, I plan on demonstrating that most of the early Zelda games had clear connections with one another; these connections were conscious and intentional; and many of these connections were also explicitly part of the marketing of these games.

To begin with.. the first sequel to the Legend of Zelda was Zelda II: The Adventure of Link (NES/FDS). This is probably the least controversial connection to be made in the Zelda series. Even noted Zelda timeline skeptic Jeremy Parish has admitted, "The NES game saw a direct sequel, yes...." - https://gamespite.net/2015/07/10/by-request-the-zelda-timeline

Zelda 2's manual and in-game text both send an explicit message: this is a direct follow-up to The Legend of Zelda. This explains why Gannon is dead, and it also explains why an entirely new set of motivations is created in order to drive the story. I'll quote from a translation of the Zelda 2 manual, though the American text is almost identical: "At the end of an intense battle, Link finally defeated Ganon, took back the Triforce and rescued princess Zelda. But, was this really the end of it? Many seasons have now passed since then...." Source: http://www.zeldalegends.net/files/text/z2translation/z2_manual_story.html You can see the same idea from this translation of the Japanese in-game opening (again, this text is similar in tone to the U.S. official translation as well): "Several years after Gannon was destroyed, Link learns from Impa about another sleeping Princess Zelda...." Source: http://www.glitterberri.com/adventure-of-link/retranslation/

So far, the Zelda series seems straightforwardly chronological. Zelda 2 is a direct sequel to Zelda 1, following the same Link after his victory over Gannon but with a different Princess Zelda.

Next, let's discuss The Link to the Past (LttP). On one hand, it's true that LttP has very little in terms of direct in-game connections to The Legend of Zelda or Zelda 2. The geography seems partially inspired by the original, and you do learn more about the tri-force and Gannon. However, the game text doesn't really do more to solidify connections.

On the other hand, LttP was.. explicitly marketed as a prequel to Zelda 1/Zelda 2 in both the United States and Japan. In the United States, it was even titled as a prequel! The name "Link to the Past" is a pun connecting the name of the protagonist with the fact that this was set prior to the first two and would help to explain the history of the setting. This can be seen in the box text as well (Japanese text on the top, English on the bottom):

"The predecessors of Link and Zelda...." is a direct reflection of this game being a prequel.

This is also true of the Japanese text. I've seen a few translations, but they all give the same idea: "This time, the stage for Link's actions take place in an age further back in the past, where Hyrule was still a single Kingdom...." Source: http://chrisaaronblog.blogspot.com/2014/09/the-legend-of-zelda-link-to-past-super.html
"This time, the stage is set very long before the time when Link accomplished a feat, the epoch when Hyrule was still one kingdom." Source: http://forums.legendsalliance.com/topic/14202-translation-of-japanese-game-texts/page-8?p=385394#entry385394
This is a prequel to the first games, back when "Hyrule was still a single kingdom." In fact, I'd like to point out that the manual in English and Japanese actually uses very similar language to denote the past of Zelda 1/Zelda 2: 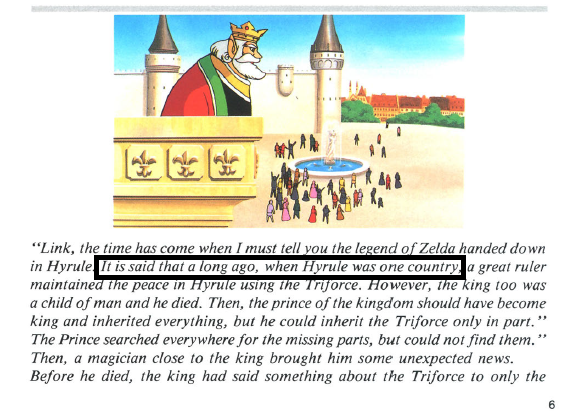 So.. Zelda LttP was explicitly marketed as a prequel to Zelda 1 and Zelda 2, while using the same language Zelda 2 used to denote its own past.

(I would discuss Link's Awakening here, except there's no way to connect that to any other games through marketing, in-game references, or the like. It's essentially just a side-story the other games.)

Next, we have Zelda: The Ocarina of Time (TOoT). TOoT has basically the opposite problem of LttP. While LttP has few direct in-game references to Zelda 1/2, TOoT has TONS. TOoT was clearly made in the hopes of filling out the lore provided in the prior three games. On the other hand, while LttP was explicitly marketed as a prequel, TOoT has no explicit references in the manual or on the box to its status vis-a-vis the other games. In all honesty, I think the fact that TOoT's connections to LttP and Zelda 2 were hidden in the game rather than made part of the marketing push has helped created the stereotype I began this piece to attack. Simply put, discussing the connections of TOoT to LttP can easily make one look like a crazy Zelda fan who has lost his/her mind.

So, instead of pointing out references myself, I'll use the word of the developers behind the game. In an interview in 1999 (oft-referenced online but without a direct source, I'm afraid), Dan Owsen, a major part of the translation staff for both LttP and TOoT stated that the Imprisoning War of LttP was straightforwardly the basis for TOoT: "Basically, the events in Ocarina are the "Imprisoning War" described in the SNES version's story. The Golden Land was the Sacred Realm before Ganondorf corrupted it." (In that same interview, Dan also stated that the LttP box text was 'incorrect' about LttP being a prequel to Zelda 1/2. However, he later withdrew that claim.)

This mirrors claims of two Japanese writers of TOoT. First, Satoru Takizawa: "This time, the story really wasn’t an original. We were dealing with the “the Imprisoning War of the Seven Sages” from the SNES edition Zelda." Second, Toru Osawa: "Though in this game Zelda is now included in the Seven Sages, the other six have the names of the town names from the NES edition “The Adventure of Link.” In the SNES edition game, the story “Long ago, there was a war called the Imprisoning War” was passed along. A name in the Imprisoning War era is the name of a town later." Source: https://www.zeldadungeon.net/hyrulean_history_revisited_the_imprisoning_war/

Why does this matter? The Imprisoning War is the story background of the events of LttP. To the extent that TOoT is based on The Imprisoning War, it serves as a direct prequel to the events of LttP. In fact, I think almost any broad reading of the Prologue of LttP alongside the narrative of TOoT reveals this to be utterly true. In broad strokes: Ganondorf, King of Thieves, somehow reaches the Triforce and becomes Gannon. The Hero of Time fails to appear (being a child in TOoT), which leads to the devastation of Hyrule. Finally, 7 Wise Men (Sages in Japanese and in both English and Japanese in TOoT) manage to seal Gannon away.

I'd also like to point out: Toru Osawa also emphasized the connection made between TOoT and Zelda 2. TOoT was a direct prequel to LttP, but it was also set vaguely in the past of Zelda 2 as well. Just to be clear about what he's referencing, the 6 Sages of TOoT are: Rauru, Saria, Darunia, Ruto, Impa, Nabooru. Towns in Zelda 2: Raura Town, Ruto Town, Saria Town, Nabooru Town, Darunia Town. The idea is that the great figures of TOoT leave behind such an impression that the towns of the Zelda 2 era are named after them.

My final obvious point is that Zelda Majora's Mask is a direct follow-up to TOoT. I don't even feel like I need to argue this.

Epilogue: I will stay that, post-Majora's Mask, the continuity quickly becomes convoluted and impossible to follow. Later entries were either vaguely set before TOoT (like Skyward Sword) vaguely after TOoT (Wind Waker, Twilight Princess, Breath of the Wild) or are just flat out vague (Oracle of Ages/Seasons, Link Between Worlds). However, of the first SIX Zelda titles, five have obvious connections with one another. The Hyrule Historia timeline may be garbage, but dismissing these connections in the older titles is flatly incorrect.
Login to vote this up!

Mega Man series (This includes the Original Sub-Series and the X Sub-Series. I have no interest in any of the EXE/Network games, and I have little experience with Zero and ZX. Zero and ZX seem cool, but I just haven't played them that much yet.)
Zelda series
Final Fantasy series (2j, 8, and 12 are terrible though. No interest in 11 or the Crystal Chronicles Sub-Series)
Starcraft (!) (stay tuned for SC2!)
Warcraft series (Yes I played WoW for a while, but I prefer the RTS's)
Super Mario series (this includes all the Mario side-games like Kart, Tennis, Smash Bros.)
Paradox Grand Strategy Series (Europa Universalis, Hearts of Iron, Crusader Kings, VICTORIA, etc.)
Civilization series
Galactic Civilizations 2 (and expansions)
Total War series (I'm still divided on the last two though. They seemed so much more.. arcade-y than STW and MTW)
Street Fighter series (especially Street Fighter Alpha 3)
Castlevania series (but not the 3d ones.. they're all terrible)
Ninja Gaiden (The NES ones! The new ones are good too, though!)

Basically, I like strategy games, some fighting games, RPG's, and old school platformers. I like JRPG's less and less though. I play some FPS's, but I wouldn't say any of them are favorites of mine.

Other games I play often:
Devil May Cry series
Guilty Gear series
Time Crisis (I actually own TC 1, 2, 3, and Crisis Zone for the PS/PS2)
Shinobi series
God of War (Only played the first, but I'm guessing the others are sweet too)
Streets of Rage series (Where is a modern beat'em'up when you need one?)