Traveller In Playtime - Devil May Cry 2

Devil May Cry 2 is a blight upon mankind's history released on the PS2 in 2003 for reasons best left unknown. It was later rereleased on the 360, PS3, PC, PS4 and X-ONE. It's about some jackass who stole Dante's coat and is running around on a island shooting down demon helicopters.

Boring Dante & The Stuff He Did

Can someone tell me why they rewrote a cocky demon killer into a near mute who just does stuff? Like, damn, I swear Dante has 10 lines in this game. And only one of them is a cheesy one-liner!

The plot follows a similar structure to the first game. Dante and a lady named Lucia (who is also playable) go to a demon-infested island to slay the lord of the place. A dude named Arius who looks like he wandered off from the shoot of a Tekken fan film.

The setup is fine, but the game commits a grave sin. There is absolutely no chemistry between any characters. Dante and Lucia just sorta interact. There is no camraderie, no hostility, nor any flirting. They just do stuff and sometimes together.

The bosses are even worse. Not only are their names (and the names of most enemies) unpronouncable garbage, but most of them are mute! So even if Dante had his proper personality, he'd barely have any material!

And just to top it off, Arius is a doofus with a stupid voice who wouldn't be able to threaten a carrot cake. Fuck this game. Next topic!

Something that's obvious after a few hours of play is just how easy DMC2 is. When I first played it after getting destroyed by the first one, I welcomed this change. But I soon came to realize that it was just a gigantic crapfest.

At a first glance, there doesn't seem to be much change made. But beneath a stylish wrapping lie awfulness. But first, the good stuff.

You don't need to be locked on to fire guns anymore and there is a dedicated dodge button. Dante can also shoot backwards and downwards, giving you some more moves. But seeing as they axed weapons other than near-identical swords, we're already at a negative score!

Instead of the standard timing-based input for combos from the first game, DMC2 decides to make it cumbersome by using the control stick as a modifier instead. Now, the first game did this as well, the Stinger and High Time attacks would be awful otherwise.

But that's only when you're locked on. The standard combos only used the attack button and different timings. DMC2 on the other hand makes you use the stick as well, increasing complexity with no gain. Hell, I found myself doing the aerial combo instead of the downward slash multiple times, which sucked. Character action games require good controls.

Getting combos rolling is a bit easier than in DMC1 if the circumstances are right, but it's not good enough for my tastes. Enemies have an awful tendency to fly away far as you strike them and the taunt has been axed because the plot said so. The Devil Trigger is pretty lackluster, as you don't really need it in combat and it doesn't give you many moves.

Its main purpose is to get you through the missions, as there are marked sections with magic pads that restore your meter where you have to use flight or sprinting to proceed. These sections aren't pacekillers, but I don't think they belong. There is also an emergency ability named the Majin Trigger, but I've never used it, as you need to trigger it at low health.

While the camera of the first game is bad, the second game manages to ruin it in its own way. Weird camera angle changes are rarer, but the choice of actual angles are idiotic. Many of them are off-center and seem infatuated with keeping the camera low.

With all that in mind, it should come as no surprise that avoiding melée combat and just shooting stuff is often the best tactic. Guns are pretty strong, both number-wise and how well they can stun enemies. There is even an ardous battle with a helicopter that can only be bested by holding down the shoot button and waiting. One phase of the final boss feels designed to punish those stupid enough to get close to it as well. 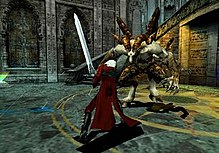 Even though she has her own campaign, Lucia isn't that different from Dante. Playing as her is easier and her throwing daggers are kinda fun, but that's about it. The rest of her ranged weapons are garbage and she is straddled with a swimming section (in third person) that is painfully slow and confusing.

The game really is a shitshow from start to end. I see no value in it except that it might be a decent beginner game for someone new to the series.

Upgrades in games come in two flavours: Numerical upgrades and contextual upgrades. The latter is often more interesting, but both have their place. DMC1 had a few numerical upgrades (in the form of health, DT gauge and ”updates” to moves), but most of them were contextual ones that gave you new moves, which expanded your move pool and let you do better combos.

DMC2 is a wee baby game for babies, so you get all moves at the start and the only thing you can buy is health, DT gauge and slight increments to the damage of weapons. It really deflates one's motivation to perform well to earn more Red Orbs.

I can't really say what truly discerns the three swords per character. They're supposed to go: Weak & Long → Inbetween → Strong & Short, but I swear there isn't a bigger difference than 20% of damage between them. Same for the range. The whole system is just so...ehhhhhhh.

Same thing goes for the amulets. You can customize your Devil Trigger, but it has little impact. There is an elemental system that doesn't seem to do anything, a choice between extra healing or damage and then what ”movement” type your transformation uses. This is also very ehhhhhhhhhhhh.

You can also get poisoned as a status effect and cure it with the proper item, which feels like it doesn't belong. This isn't a series of action RPGs dammit!

Thanks to its horror roots, the first game had a thick and haunting atmosphere. The second game does not. The music goes more for Thrash and less for spooks and I don't think there's any song I particullary like.

The enviroments do feature some crypts and caves, but there's also a LOT of industrial areas, which really doesn't work for me. Even when reality breaks down as you descend into the Underworld, the game comes nowhere close to being as cool as the first game.

Wallhumping For The Bloody Palace

The secret missions have been axed for much simpler arenas, where only every second one gives you a piece of a blue orb. Pieces strewn about the game aren't as hidden as in the first game, but the arenas are absurdly hidden. Any unassuming surface could house an arena and it's a right pain to find them, even with a guide.

The Day The Critics Were Wrong

Criticism is important. But it's only truly valuable when it stands on the correct ground. DMC1 isn't perfect, as I discussed in my review. But the core wasn't faulty, in spite of what many thought back in the day.

Yes, this is the same image.

As a response to the criticism of DMC1, 2 was made easier and duller. I can't fault people for feeling like the drop in difficulty was needed. I disliked how hard DMC1 was on Easy Automatic during my first playthough even.

But when you scale away the difficulty that much, there isn't much left to make the game interesting. Stylish combat is all about performing well. So well in fact, that winning is assured, the actual game is to make it look good.

Mastery is implied and if the game doesn't push back a bit, it's harder to motivate fancy combos. Playing the ”Git Gud”-card is risky, but I feel it's appropriate here. The skill-ceiling of DMC is generally huge and the games should reflect that. Later ones give you the choice of difficulty up front and I think that's the correct choice. The difficulty modes scale well and adds to replayability.

How Hideaki Itsuno Saved The Game

The story goes that some unnamed person was given directorial power over DMC2 and completely ruined the project. With 5 months to go, Hideaki Itsuno took over to save it.

With how bad the final game is, it can be difficult to appreciate what he probably did. On a technical level, I haven't found anything wrong with DMC2. Everything is rendered properly, the framerate is good, there are no glitches and the loading times are good.

You can't really uproot a game that late, so that was all he could do. But I'm certain that he learned from the experience. The later games contain elements of DMC2, refined and used in their proper places. They're also awesome, so I'm glad that Itsuno got his hands on the franchise.

Now if Capcom could just stop being coy and announce DMC5 already, that would be swell. The series deserves to have 4 good games dammit!