A Brand New Cross-platform Battle Royale That You Never Met

Gameplay. In the previous posts we asked what kind of information that you might be interested in, the gameplay gained the most votes. Well that’s what we are going to show, since there are so many battle royale and VR games, I know that you wanna see something different.

The popularity of battle royale games is a chance for VR. Firstly, we have a game that drives the attention of players back to the PC (although mobile games are trendier so that a few company have made the mobile version of the battle royale). Secondly, the shooter games is the most suitable game type for VR equipment, thus VR could help bring the best experience for battle royale.

We might be the first ones that managed to find the best proper way to play a VR battle royale game in the market.

The KEY design of our gameplay would be the mech. The VR handles would become the control sticks of the mech, while the VR players would be the mech driver. Mech is stronger but smaller in number, and it’s impossible to hide because of the size. Non-VR players are human characters who are far more than VR players and easy to hide in the architectures. Therefore, the main difference compared to the common battle royale game lies in the cross-platform design with VR & PC, it’s asymmetric. 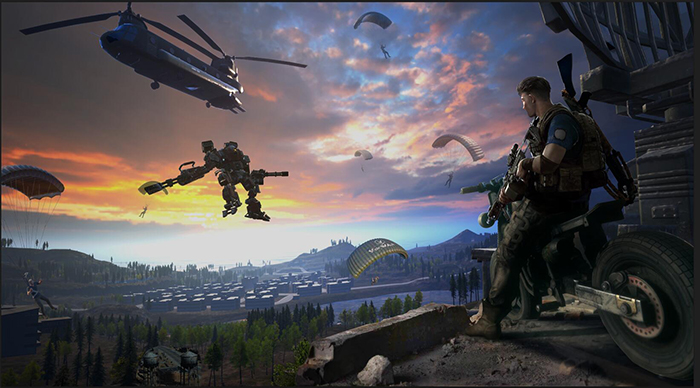 Like the other battle royale, each player need to strike for their own living. But the growth line of mech and the human are not separate. The growth of VR player would somehow squeeze the living space of the PC players. Meanwhile, if the PC players need to get more EXPs and credits, they’ll have to kill the VR mechs.

VR Mech is somehow like the airdrop in the other Battle Royale (We don’t have airdrop setting), if the Non-VR players shoot down the Mech, they can get rare resources.

#Vending machine: it’s a machine designed for Non-VR player to exchange their in-game points into weapons and medicine etc. 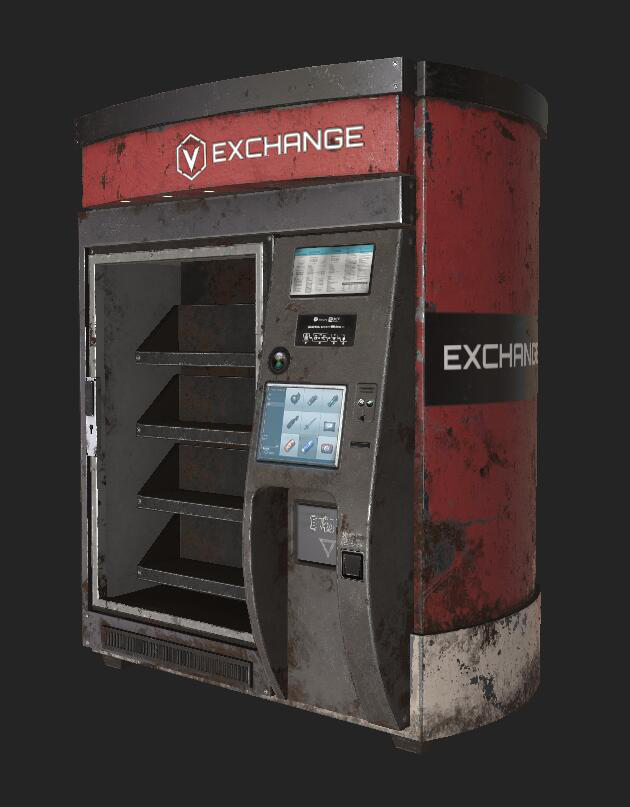 Here the Vending machine would be an interesting setting. It’s a resource for VR or Non-VR players, an important strategic point. We are imagining a few stories about gathering at the spots and pouncing. What’s more, credits that are used for the vending machine shall be gained from living time and killing rivals. Unlike the other battle royale games, these data would not only get you a rank, but also help you inside a round. Therefore we can imagine with the vending machine, rounds that are becoming more intense as the time run by.

As for the balance of the game, what we consider more in this asymmetric design is balancing the VR & Non-VR players through numeric and strategy. In common VR + Non-VR cross-platform games, VR players would be somehow in disadvantages because of the operation styles. And now we successfully enable a stronger VR through the change in VR character, and finally the balance would be realized with the game strategy and the map designs.

Generally, while we are using the VR equipment, the flexibility would not be as good as the ones without VR, thus VR are thought of as less powerful. For this reason we changed it. We endowed VR players with more powerful skills and weapons, anyone who have seen our gameplay would find that mechs are more powerful than ordinary human character. It gives us a hint that we could find a balance between VR and non VR characters.

Additionally, the setting itself guarantees the abundance of strategy in the game. The VR mechs have higher defence but also easier exposure than non VR players. While non-VR players are more flexible, but the speed of movement and the ability to cross the barriers would be much lower than VR players.

Additionally, we have designed a mechanism to explore more about the human nature through V OF WAR, specifically, we are going to design props that would enable permanent or temporary teaming that could be gathered, in this way strangers could be teammates. We hope to see teaming but also to break the team apart. This prop could be precious, and we are going to test the functionality and the feasibility of it before it finally launches.

We are trying our best to find out the best battle royale game that could fit in VR. I hope that you would like our innovative gameplay, and we really want to hear your voice, suggestions or opinions are welcomed.