So as some of you know, I twitch stream sometimes. But I've got a very big problem. Until I get twitch affiliate I'm being punished by Twitch for streaming all the time. Basically they count any low watch streams against your total and that stings! I want to stream on my own time and let folks drop in and out at their liesure. Not have to be constrained by some terrifying four part achievement list.

Well no longer! Maybe, I've got a plan! I'm going to complete that 3 person average streams for the 30 days and get that darn affiliate. And following that I can go back to not giving a fuck. But, you might be thinking, how will I do this?

I'm holding an extremely simple contest! Every 10 minutes you watch my stream is worth a single entry into the raffle! There is no upper limit. Just keep in mind that you must be following in order to win. At the end of the month I'm gonna pick someone at random (likely with some visual flair) and that person is going to get 60 dollars in Amazon gift cards.

Are there any limitations? Well! Yes. Any kind of cheating that could get me in trouble with twitch will bar you from winning. I don't know what that is, but if you have to ask it probably is naughty. Any state or country that would put me in jail for giving you money is out of the question. If you are under 18 I think I can't give you money because that's pedophilia or something IDK. So if you win you'd have to tell me you are 18, no take backsies. I'm too small for prison.

You can track your entries under the video, roughly live, on a handy dandy list! 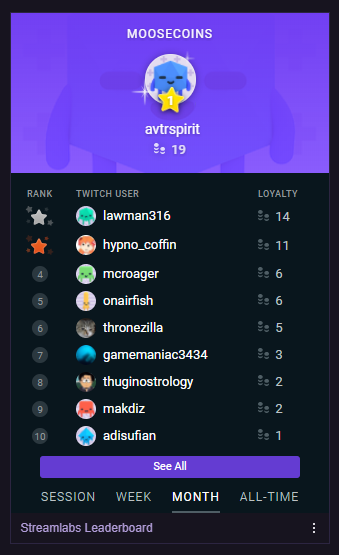 I suppose now we'll move into the FAQ section.

"Do I need to be interacting for it to count?"

Honestly? No. I'd like it if folks said hello but that's fine! This is really just about overcoming a rather stupid limitation by Twitch. And I'll likely do this contest again next month and perhaps all months following that!

"Do my points carry over month to month?"

No, I'll be clearing points at the end of the month. But I do have something that I think will be super fun to track in the coming months for these contests.

"What will you be playing?"

All sorts of things! Some new games, some old games, just about any genre you can imagine! And if the game is multiplayer you are welcome to ask to join and I'll likely say yes! Unless you are GM, he smells.

"Where do you stream?"

Oh, uh, that's kinda important isn't it? You can find my stream at https://www.twitch.tv/oafkad and its almost always safe for work. I might curse sometimes but I'm a pretty chill guy that's been properly beaten down by life. If you need a nice mellow place to hang out you'll likely find it here.

"Will Drake be streaming with you?"

I've contacted him but haven't heard back. I'm tentatively optimistic. Liz tells me they've already send back a C&D letter. I don't know what that is but I'm guessing it's positive.

"Can I watch you without entering?"

If you win, it is well within your rights to give your prize to anyone else you want as long as it is legal for them to win. I'm perfectly happy being a funnel for someone elses generosity. Something to keep in mind.

"How often do you stream?"

This week was rough because I felt like a giant sack of shit. BUT normally I stream almost every day after work (I end work usually at 6PM PST). On weekends I like to stream when I'm not busy with life. If you add me to your notifications it'll tell you when I'm streaming. You can even run it on your phone to score points when you are away but want to keep getting entries.

"Any other special strings attached?"

None that I can think of. Literally as long as its legal for me to give you money I'm going to give you money just for watching. Once we can have subscribers I'll have a concurrent event for that group of people as well :). It's my way of giving back to folks that help me accomplish a goal this year. I'd like to finish 2018 with a little more under my belt than depression.

"Now, just to be clear. You are serious right?"

100%. I legitimately am going to give somebody 60 dollars in Amazon credits to do whatever they want. They only reason I'm doing Amazon specifically is because I know they work and are available basically everywhere in the world. This is literally happening, 100% not a scam. I've been around Dtoid long enough that I hope folks trust me. I'm totally for real.

Thanks again to everyone reading. And I hope to see some of you tonight. If you don't have a twitch account, they are free to make. And as long as you aren't a bot and are following me it's all fair game. Have a lovely day!