You know that you’re my superstar 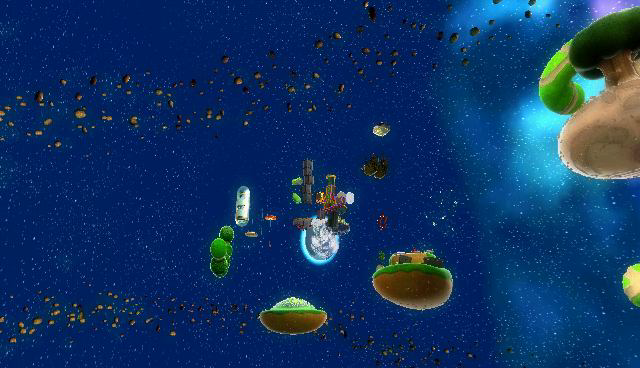 Mario rocketed himself to fame so quickly, yet he only seems to gain more and more momentum with each year. We’re used to his stellar performances, and he still manages to one-up himself and wow us repeatedly. He’s truly earned himself a spot among the stars. His popularity is out of this world. [Insert more space puns because Super Mario Galaxy]

Super Mario Galaxy is easily one of the more ambitious Nintendo games on the Wii. Graphics? A step up from Sunshine with a smooth 60 FPS and bright colors everywhere! Motion controls? Mostly downplayed to a pointer and a shake-as-button function, but there’s a handful of stage-specific gimmicks that use much more motion, all of which I found to be reliable! Story? Not exactly much deeper than the rest of this series, but I gotta admit, the library scenes made me tear up and I wish we saw this series do more side-stories like that.

Aside from those library scenes, though? Everything feels like more of the same, only ramped up. Bowser kidnaps Peach, Mario goes after her, Mario’s gotta collect 120 Power MacGuffins. Why the ramping up? This all gets kickstarted as you watch Bowser raid Peach’s castle with an airship army.

Gotta be honest, even if it’s not much different than what we could assume happens off screen, it’s a bit of a shocker to actually see Peach’s dominion go from a peaceful celebration to a terror-stricken battlefield right in front of your eyes! In the process of this, Mario gets blasted into space, he’s saved by a tiny new star friend, he meets a space princess named Rosalina, and the rest is… pretty much what he usually does, really. Cool to see Jr. come back as a recurring threat in boss stages, though.

Galaxy yet again continues the collectathon premise of 64 and Sunshine. More of the same with more polish, right? Well, not entirely. Galaxy doesn’t have any massively open, sprawling open levels like 64 or Sunshine. Even the Comet Observatory hub, while fun to wander around, doesn’t have any secret stars! Instead, there’s dozens of smaller, linear levels to romp around, with only a handful of stars each and a secret star hidden somewhere in every level. Each main star takes you on a different route through the level exploring different planetoids and obstacles, so even they feel like effectively different levels.

How does he navigate through them? Well, mostly the same as he did in 64, with his physics tightened further. He has very few new staples in his moveset, except his punches and kicks have been replaced by a spin attack. This ability damages different enemies in different ways, but most importantly, it’s a potent multi-use tool. It’s a weapon, it’s a screwdriver, it’s a deflector, it’s kinda sorta a double jump when used in midair! The only catch is that it has a tiny cooldown which needs you to land on the ground. Also, the Wiimote pointer can pewpew projectiles. I can't remember if they're ever more useful than just spinning/jumping into enemies.

Aside from that, this mostly vanilla moveset is complimented by a huge plethora of temporary power-ups. Some allow Mario different forms of flight until he’s hit, such as Bee Mario or Boo Mario. Others lend him time-based elemental powers, such as throwing fireballs or turning water into ice as he runs across it. They’re fun, but just a bit redundant or short lived, especially since they can only be used to solve specific puzzles and sequences requiring them. Of note is that there’s an unlockable free-flight powerup, but it’s unfortunately available for no practical purpose other than to collect a few 1-ups in the Comet Observatory (which, unfortunately, are not kept upon resetting the console).

All of this taken together builds up Galaxy as a more straightforward, yet impressive game. The visuals are striking, the fully orchestrated music is bombastic, the controls are tight, the cutscenes are epic, and the gameplay as a whole is fine-tuned like a cutting edge machine. To play through Super Mario Galaxy is to experience a grandiose adventure packed full of impactful moments. Everyone loved it. Everyone wanted even more of it. So we got more of it in a sequel!

Super Mario Galaxy 2, in contrast to the first, starts with a simple premise framed within a storybook. Pretty much nothing changes from the first, except Mario meets his new Luma friend before Bowser kidnaps Peach. There’s no real changes to the plot barring Rosalina’s absence, though… in fact, he doesn’t even act like he knows the Luma. It’s almost as if the universe reset itself after Super Mario Galaxy or something. Huh. Weird.

Anyway, this sequel is almost more like a standalone expansion pack. There are plenty of new assets, but also plenty of recycled ones. The new assets are designed as if they were from the exact same game; similar color palletes, similar orchestras, similar design philosophies, but they are new. Mario’s controls are also completely unchanged, though he does get a handful of new power-ups and motion controlled stage gimmicks to toy with. Even Yoshi comes back!

The only significant gameplay change to 2 comes at its completion reward. In the first Galaxy, collecting every Power Star and beating Bowser earned you the right to replay the game as Luigi, with faster but slipperier controls. In Galaxy 2, you get the ability to play as Luigi earlier and more freely, but instead of a New Game+, you get Green Stars.

Hoooo boy… basically, for every single Power Star a level had, there’s now a Green Star hidden in it too. But you won’t know where they are until you search for them, and they’re usually hidden in very unusual spaces, like areas where you wouldn’t possibly survive jumping to if there weren’t a Green Star there. They demand a lot of platforming precision, and a lot of patience to search out in the first place. And your reward for collecting all 120 Green Stars is the Grandmaster Galaxy, which is a big gauntlet finale. And your reward for beating THAT and also for depositing 9999 Star Bits to the Toad Bank is to do the Grandmaster Galaxy AGAIN except you’re not allowed to take damage. And your reward for beating THAT is one more Rosalina cameo at the end and a congratulations message. So… that’s cool, but it feels like little fanfare for all of those hoops.

Super Mario Galaxy 2 is pretty much Super Mario Galaxy, but with more numbers at the end. That’s okay, because there wasn’t any attempt to hide that fact. It’s more content for an already great game, and if you liked one, you’ll probably like the other. The main difference between them is that Galaxy 2 shelves a bit of the spectacle in favor of more small stages and a little more nostalgic fanservice.

I love the Galaxy games. I’ve played both of them multiple times, almost-but-not-quite 100%ing them all the while. They’re extremely polished platforming romps, and I can see why they’re a favorite of many. But I can’t call them some of my favorite platforming games. With very few exceptions, the level design felt more like a bunch of obstacle courses than actual locations, which is something I personally fixate on during these types of games. I felt less enthusiasm exploring their levels and abilities, as I so loved in Sunshine and 64. But as obstacle courses, they’re creative and test you in so many ways. These games have earned a special place in my heart thanks to that.

It’s just that when it comes to linear platformer level design, I prefer having more loose and speed-based controls than tight precision platforming. I enjoy the thrill of maximizing my velocity and meandering skillfully between obstacles. Reacting quickly at high speeds is more interesting to me than the type of linear platforming Galaxy has to offer. Blame Sonic Adventure for that. But this isn’t a Sonic retrospective, so next month, we’ll instead have to take a look at the speediest spinoff series Mario has!