Game Development: Coming to Xbox One and more news! 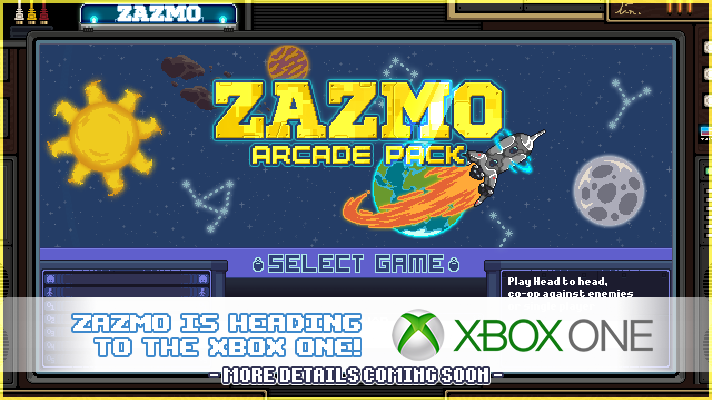 First off - YES! We are bringing the Zazmo Arcade Pack to the Xbox One! More details coming but the good news here is we were accepted by Microsoft to bring ZAP over to their system. Needless to say - we are stoked!

What has been happening this week?

OK onto the rest of the update. If you have been following along you know we are currently in Early Access. To that end we have some videos of our friends playing the game in this update! Check out the links below.

Well, most of the time was spent tuning the games and getting the high scores hooked up. Up until now the local high scores were connected but we added in the Steam Friends and Global high scores. So yes, you can now see how the rest of the world is doing!

We also continued with specific game tunes. This time we were looking at the game Last Stand and giving it a couple of tweaks to make it more fun. One thing we adjusted was the amount of control the player has. The ships were a slight bit sluggish so we corrected them to be more responsive. We also fixed an issue where enemy ships would target players as they spawned on screen. This lead to a lot of instant kills and quick deaths for player. That’s all gone now.

During the week we started up two new series on game development. We did a segment on the Clueless Artist and had a game night. The Clueless artist took a look at making art for Zazmo and walked our programmer Joshua through the process of a “Get hit” animation. He made the art, animated it and then implemented it himself.

Game night saw us playing a few old classis arcade games in order to get ideas for a new Zazmo Pack. Of course there was a lot of scream and yelling as you might guess!

Check out the video below for a recap of the week as well as a look at some of the Zazmo playthroughs.

Indie Plays Zazmo - short segment and we queued it up to the beginning!

Watch The INDIE is stronk in this one. These are the games you're looking for. from INDIE on www.twitch.tv
The Clueless Artist Series

Joshua learns how to make and animate game art!

We talk about game dev while scream and shouting at arcade games from nearly 30 years ago.