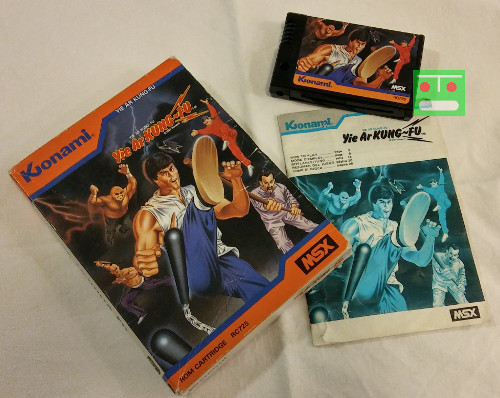 Back when I was a kid and didn't know Chinese, I thought "Yie Ar Kung-Fu" was an attempt to say "You Are Kung-Fu". Now that I'm an adult and I still don't know Chinese but can read Wikipedia, the name apparently means "One, Two, Kung-Fu".

Yie Ar Kung-Fu is the first fighting game I played, and the only one I've played to any meaningful extent if we ignore the fighting parts in Omikron: Nomad Soul (Quantic Dream/Eidos, 1999). I may have also just revealed why I'm not a fan of the genre: neither game is a good fighting game.

The arcade original even appeared on the 1001 Video Games You Must Play Before You Die, but the MSX version is not the one.

"The iron fists of Lee the Kung Fu Master challenge the evil martial arts experts of the dreaded Chop Suey Triad Gang!!" -- Back of the game box

YAKF is a very simple fighting game, as can be expected from a game of the time. It also predates many conventions that took hold later.

The player has a choice of one (1) fighter to play as: Lee (whose name is Oolong, if you play any other version than the MSX and NES versions). Unlike most present-day games, each match against an opponent is a one-off instead of best-of-three-rounds. If the player wins, they advance to the next match. If the player loses, they lose a life and need to restart the match.

At least Lee's health recovers fully between matches. There's no timer to a round either.

Another big difference is that the opponent impedes the player but the player does not impede the opponent: the player can't walk through the enemy but the enemy can quickly shift to the player's other side. That brings about another difference. you can stand right in front of an enemy but a leg sweep may still not hurt them. Why? Because Lee's foot will be on the other side of the enemy or hit the space between the legs and won't register as a hit. There's no blocking either. 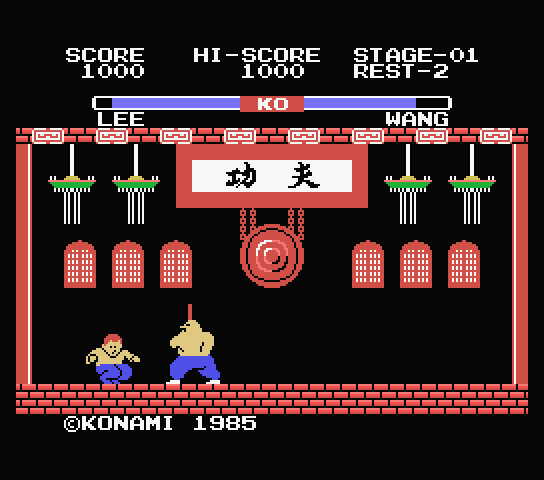 The first opponent, Wang (aka Pole).

The MSX version has five enemy types: Wang (wields a pole), Tao (spits fireballs), Chen (swings chains), Lang (throws throwing stars) and Wu (dives/flies at the player). Once all the opponents are beaten, the background changes colour, the game gets a bit harder and the player starts from Wang again. The original box cover is apparently a promotional flyer for the arcade game, so the tonfa-wielder is nowhere to be seen here, nor is the nunchaku. 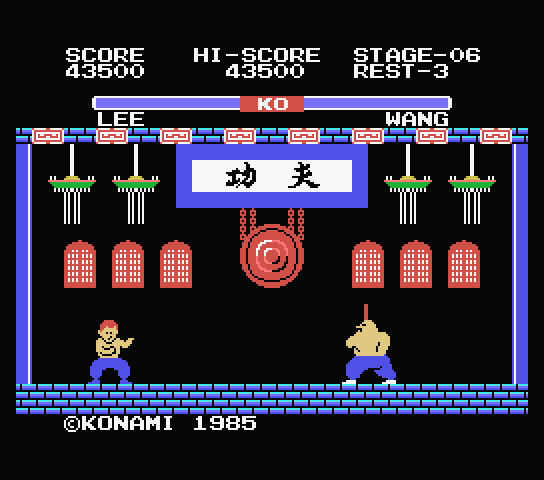 ... and Wang starting the second round, with only the background colours having changed and him moving faster.

The game has bonus stages after Tao and Wu: in these, the player has to hit (or at least avoid) items that fly from both sides of the screen towards Lee. 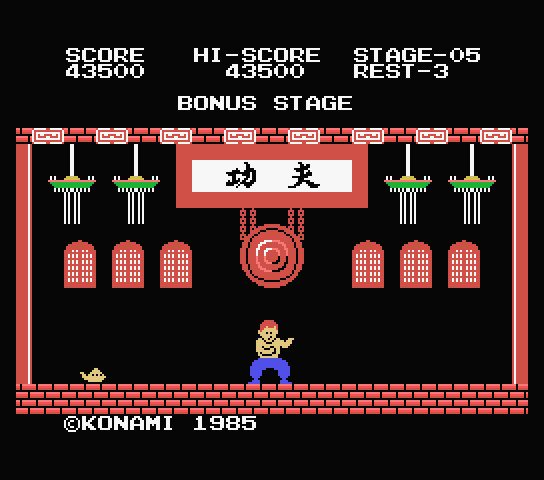 I played three bonus stages. In total, I managed to hit one object before Lee was knocked out. Yet somehow I managed to get to level 9. What gives?

Let's look at the controls then, shall we?

The names are what the manual states. On a system where jumping was typically done by pressing up, having to press fire to jump diagonally feels strange.

The game has also only the single-player mode, which is a massive letdown to people who play present-day fighting games.

There's a constant background music playing in about 30s loop, the same as on NES. On the plus side, I like the thwack when a hit lands and when the player's health is in the red, it's only a one-time ring rather than constant beeping in the arcade title.

While the graphics are actually pretty adept technically - no sprite flickering at all, which is because the opponents aren't hardware sprites and can only move in large pixel increments - there's a notable lack of variation. For each full round of five opponents, the background remains exactly the same. After that, a mere palette swap happens.

Because the enemies are effectively made of characters (I checked this by disabling sprites in an emulator), the part where the enemies move needs to be of a flat colour, in this case black, to avoid obvious visual artefacting. There still could've been something different in the space above the enemies -- none of them jump, since the player character's "evil twin", Blues, is not in this version.

As mentioned, the enemies aren't well-animated, but at least the player character is made using hardware sprites that permit smoother movement. It also helps that the screen doesn't scroll at all.

The fighting games were really making a big splash in 1985. The year before, Jordan Mechner's Karateka (Brøderbund, 1984) had been released. That game is well-known for its rotoscoped characters. The same year, Karate Champ (Technos/Data East, 1984) hit the arcades. The first Hiryu no Ken title (Shanghai Kid in the west) arrived in the arcades in 1985, as did Konami's next fighting game after YAKF, Galactic Warriors; that had multiplayer, multiple playable characters with different move sets... and mechas.

On microcomputer side, The Way of the Exploding Fist (Beam Software/Melbourne House, longplay video) was released. The original International Karate (System 3, 1985, longplay) was released on ZX Spectrum in 1985 and its US version, published by Epyx in 1986, was known as World Karate Championship.

The original arcade game had two female opponents: Star and Fan. The former made her way to this port as Lang. 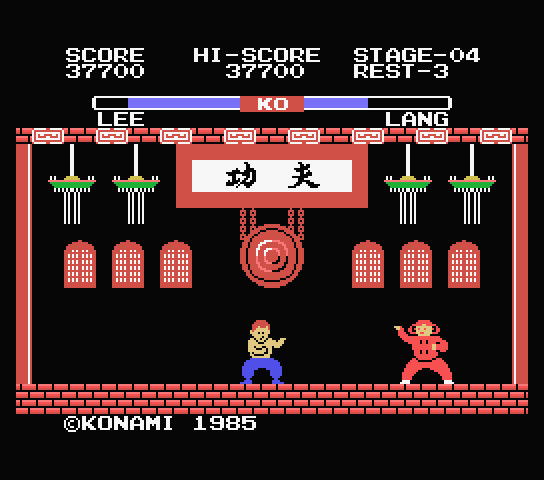 The lone female opponent in this port of YAKF.

XBLA had an enhanced port of the arcade original in 2007. Looking at the reviews that game got (Eurogamer 2/10, Gamespot 5.5/10), expecting an old scaled-down port to be better is likely to end in a disappointment.