The Heel-turn: Baten Kaitos: Eternal Wings and the Lost Ocean

Spoilers ahead for the following games: Baiten Kaitos, Heavy Rain, Danganronpa V3 and Tales of Symphonia.

I’m thankful to this month’s Bloggers Wanted because it’s a great motive for me to talk about this game, which impacted me greatly.

Baten Kaitos: Eternal Wings and the Lost Ocean is a Gamecube exclusive, co-developed by tri-Crescendo and Monolith Soft. It was released around late 2003 and early 2005 (depending on the region), and I believe it is mostly well-known for its incredibly beautiful pre-rendered backgrounds and card-based battle system. Its narrative, however, I feel deserves more praise than it is given. Sure, there are many plot-points (revenge, entombed evil god, help a princess from a far-away kingdom) and game mechanics (gather the 5 [whatevers] from around the world) one can find in a variety of other titles, but I remember it employing them well. Faulty memory from 13 years ago may apply.

The heel-turn, however, has vividly stuck with me to this day. That, and the fantastic opening movie.

Now, be what you’ve always dreamed to be.

It wasn’t my first experience with the concept, though, nor in a JRPG. That came, I believe, a few months before, in Tales of Symphonia. At the time, since I got to end of the game with Zelos in my party, I thought his betrayal was only staged, knowing the party would end up helping Colette in the end; only during my second playthrough did I understand (and possibly accept) that he had been betraying the party from the start.

After that, the notion that party members don’t necessarily need to be on your side became cemented in my mind. I was played, yes, but now I knew better.

Baten Kaitos does feature a traitor from inside the party, only they were who I’d least expect: the main character. 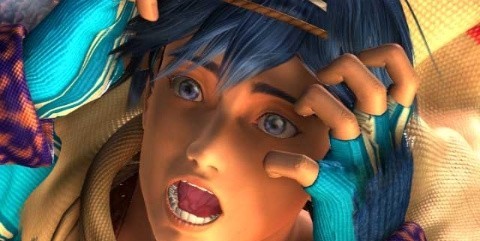 Engineering a main character heel-turn unbeknownst to the player is not an easy endeavor. Most of the time, the intention is to make the player feel like the character they’re playing as, and dissociating their actions, thoughts, and intentions from each other can easily become problematic both for the immersion and the storytelling.

Even so, some manage achieve it with more success (Danganronpa V3) than others (Heavy Rain); probably because it’s not helpful to focus on the twist of “you were the killer all along” only for its own sake, with piss-poor execution instead of something coherent. “Playing it several times is also a way to kill the magic of it”, indeed.

But I digress. This was all to explain Baten Kaitos’ story and mechanic workaround: in this game you don’t actually play as the main character, but rather as a guardian spirit, a separate entity from him. At the beginning of the game, you’re shown your meeting with Kalas, the de facto MC, where you bonded with him at the behest of a lady who was accompanying him through the forest. He then proceeds to pass out, wake up at some village, and we’ve become part of his quest for revenge against the Empire for killing his family. 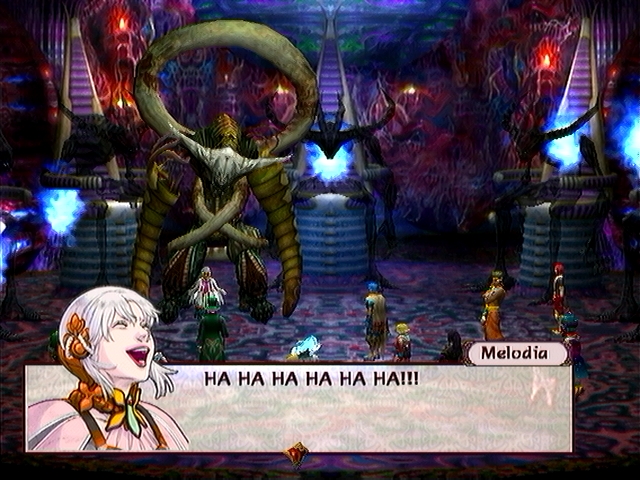 The main gist is this: the Alfrad Empire wants to collect and use 5 cards called the End Magnus to resurrect an ancient evil god, while our party wants to stop the Empire from doing that because it’s probably not a good idea. In order to do so, they try to beat the Empire to the punch and collect the End Magnus before them.

The thing is, Kallas was in collusion with someone who’s controlling the Empire from the shadows all along, and they also want to resurrect the evil god! Everyone loves the dude, apparently. He’s working with the lady from the beginning of the game who suggested he make a pact with us. To which we should only have agreed to after a thorough background check.

What this means is that the actions of Kalas, the party and ours all align – collect the 5 End Magnus and beat the Empire – but, since we’re a separate entity from Kalas, his thoughts and intentions are his own. Because of that, looking back on what happened before the betrayal make it a possible, but not obvious prediction. Isn’t that how the best twists tend to work out? 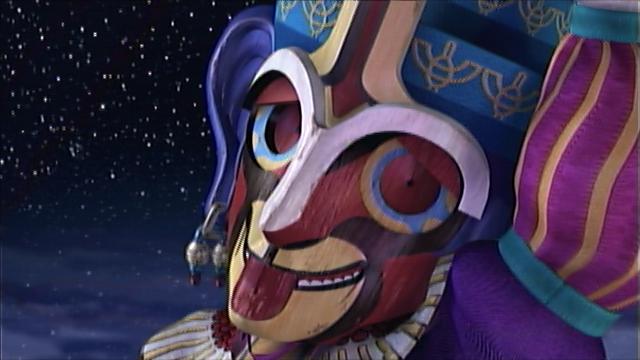 Kalas ends up realizing he was a bit of a douche, that evil gods are exactly what they’re cut out to be and reunites with the rest of the party to stop this nonsense once and for all.

At the end of the day, while I may have to replay it again to have a better grasp of the characterizations, I feel that Kalas’ at least was very well done. He was a child different from all the others – born with only one wing – who lost the only people who cared for him, and whose only purpose in life became to exact revenge upon those who wronged him. All common traits for villains in other stories, but, in this one, we happened to meet and spend time with him, experiencing the good and the bad together, aiding his eventual growth towards becoming a better person in the future.

It’s a heel-turn that has undoubtedly had a big impact on how I look at and think about games, and narratives as whole.