Pandemonium is yet another Crystal Dynamics platformer, but it is one of their lease known titles. Originally released on the PS1 in 1996, the game was overshadowed by Naughty Dog's Crash Bandicoot. It then went on to be ported nearly everywhere, with the Saturn getting probably the best version.

It's one of the earliest 2.5D games in the market, and through some impressive innovation at the time, in provided solid 2D gameplay in a moving 3D world. 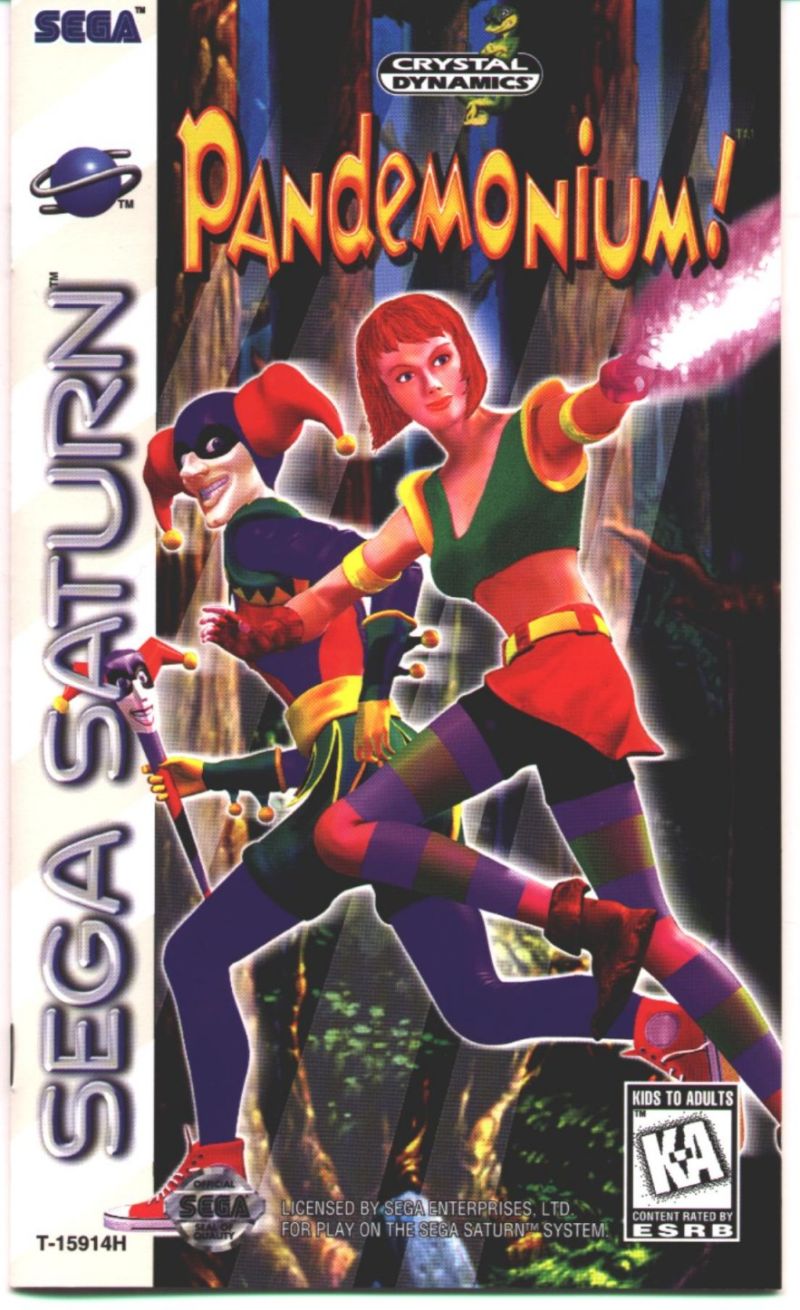 The game starts with an admittedly not so bad CGI cut-scene. In that scene the girl character and the jester accidentally summons a monster that eats their entire village. In order to reverse that spell, they must travel far to a wishing well and wish their spell away.

Initially, I thought this would be the start of a more involved platformer, but as evidenced by my own forgetfulness of the two character's names, any semblance of plot goes out of the window. Instead, there is only a vaguely fantasy medieval setting and soundtrack to pick up the narrative slack. 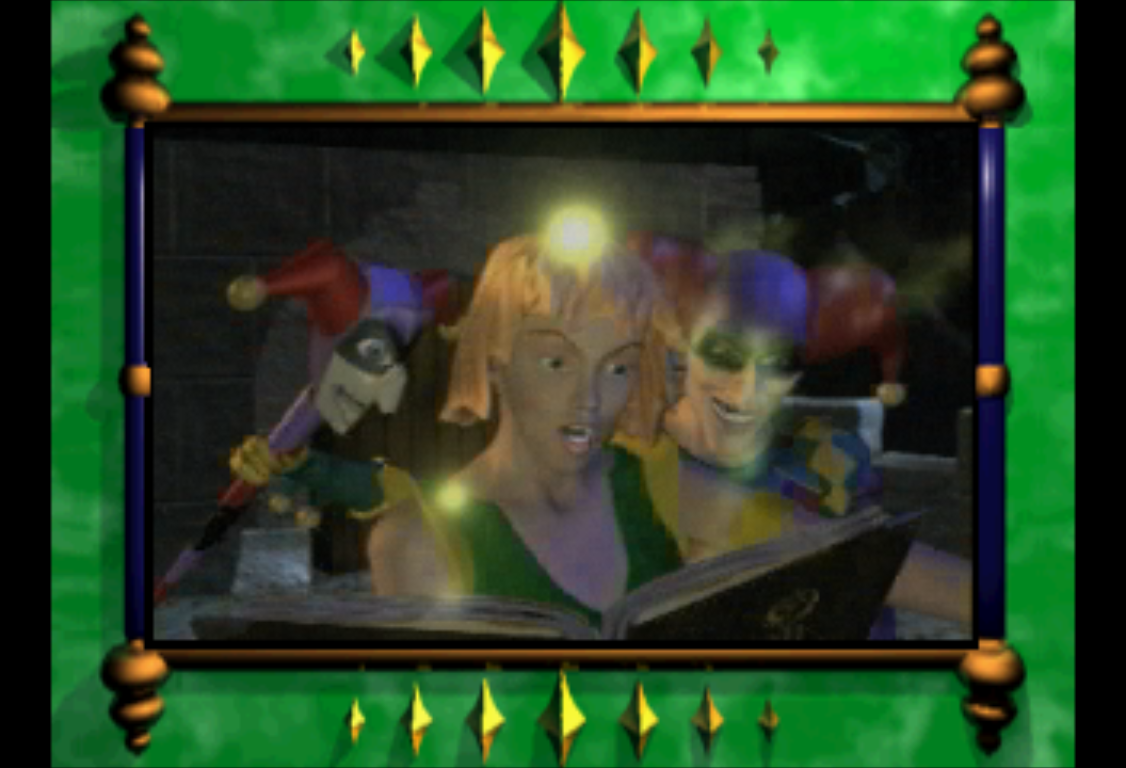 Hey girl, why don't you make that creepy jester disappear

Of course, you are not going into a platforming game, especially in the 1990s, for any narrative depth. However, there is an expectation that the characters somehow carry the game. That's never the case with the girl and the jester, who are utterly forgettable in an utterly forgettable world.

Maybe that's unfair to the world, which tries its best to be a good fantasy medieval setting. For half the levels, where the setting is against a background of lush greenery or mystic cloud, Pandemonium shines as a game. In the other half, with boring deserts and samey swamps, the game's character becomes like that of its main characters; unrecognizable and mundane.

With two characters to choose from, the game offers two somewhat similar ways to play. The girl can do a double jump, and the jester has a flipping attack that defeats enemies. Since you can defeat enemies by jumping into them or shooting them with one of three similar power-ups, the girl is the obvious choice unless you are like 7 years old me who refused to play as a girl.

The jester becomes more like an unofficial hard mode, since the double jump makes everything easier. It also makes the game more fun. Since exploring the stage and finding shortcuts to go over obstacles is a significant part in each level, the double jump allows you to more easily access that. 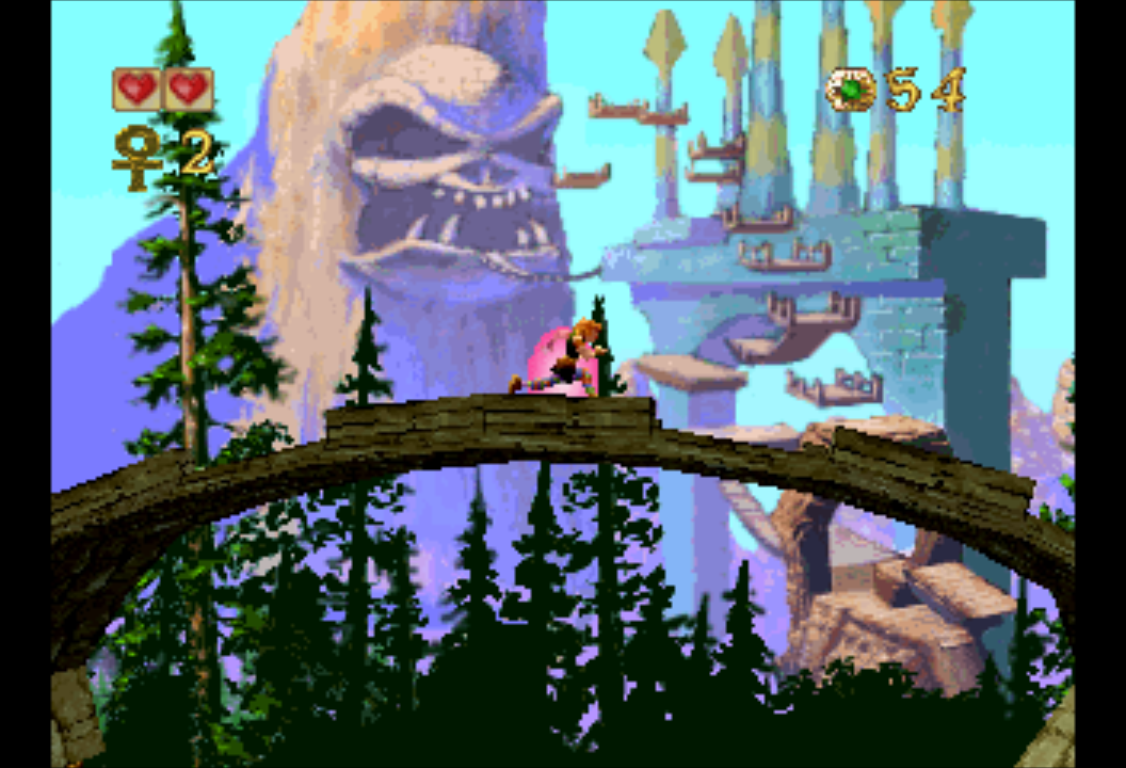 The game when it looks its best

Stages are not very varied though, with a lot of them sort of bleeding into each other. It's basic platforming gameplay, with a hop and bop style that is at times fast, and at others very deliberate.

That's mostly due to the camera.

Since this is a 2.5D games, the game's 3D engine does a lot of camera tricks. Sometimes it zooms too close, and that's when it becomes hard to avoid obstacles and enemies. The game is best when the camera changes your perspective as you go, so that the player sometimes goes into the stage or out of it, and that showcases the excellent 2D backgrounds and hides the limitations of the polygonal stages.

"I hereby wish for a chicken"

While Pandemonium's core gameplay is nothing to write about, it is solid enough most of the time. However, there is a duality to it that I think is the cause of disparity in level quality. It's evidenced by the game's access to bonus stages, which require getting 80% of all the level's treasure (coins).

In some levels, playing the best route, finishing the level as fast as you can, and generally being really good at platforming, naturally nets you that 80% count. That means that the level was designed with optimal play in mind, and those are the best levels. 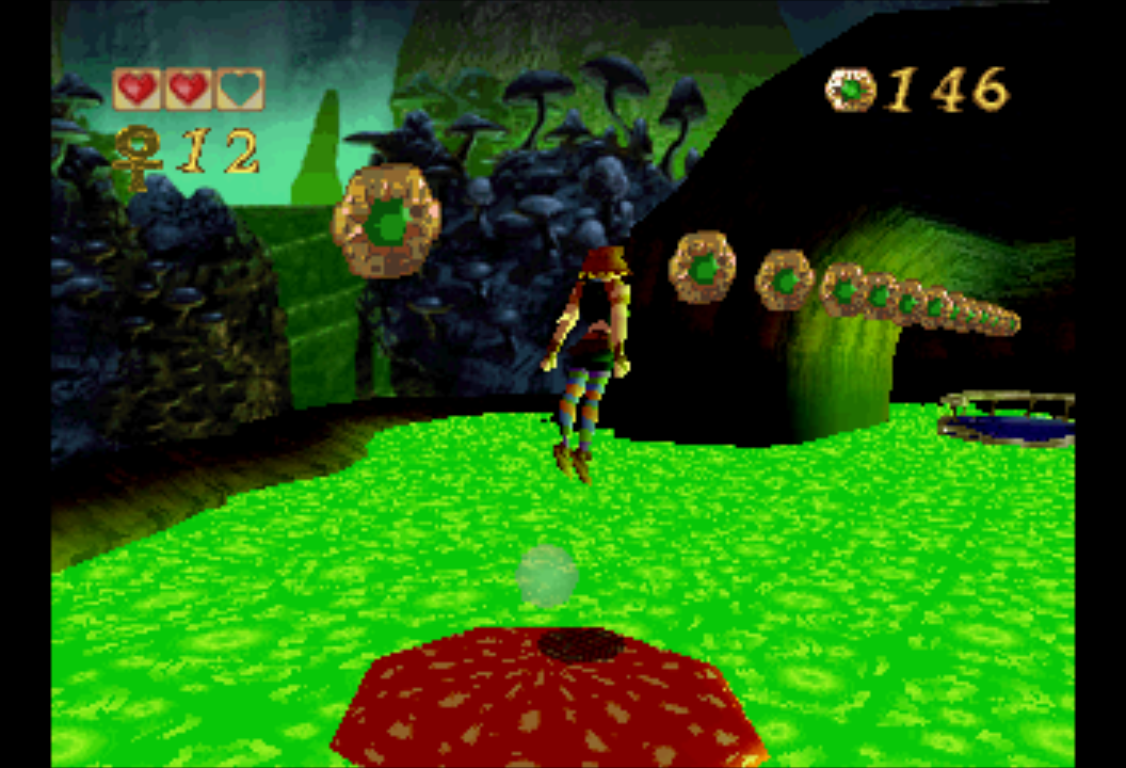 And here it is at what actually is not its worst

Other levels seem like they want you to explore all paths to get that bonus, which means going over the two or three paths the level offers for you to choose from. That's just weird, and throws in some labyrinthine design without any rhyme or reason. In those cases, the game seems to drag on.

Bosses are one area where its consistently challenging and good. Which is not hard when you only have three bosses. They combine some light puzzle solving with a lot of jumping around, and they make the most of the 3D engine.

"Think we are gonna need another wish"

Outside of the admittedly good CGI cut-scenes, the game's polygonal design have not aged well, but have not aged terribly. They look fine, especially when the camera zones out. What's weird is that the levels are not islands in the sky, but try to have a logic within the natural world.

Of course, the 3D polygons can't hold a candle against the gorgeous 2D backgrounds, which in their design truly sells the fantasy medieval setting. One thing the camera does is showcase this marriage between 2D and 3D very well, adding some depth to the level as well as the background.

While the graphics are not the best, what let's down the production department is the god awful sound direction. 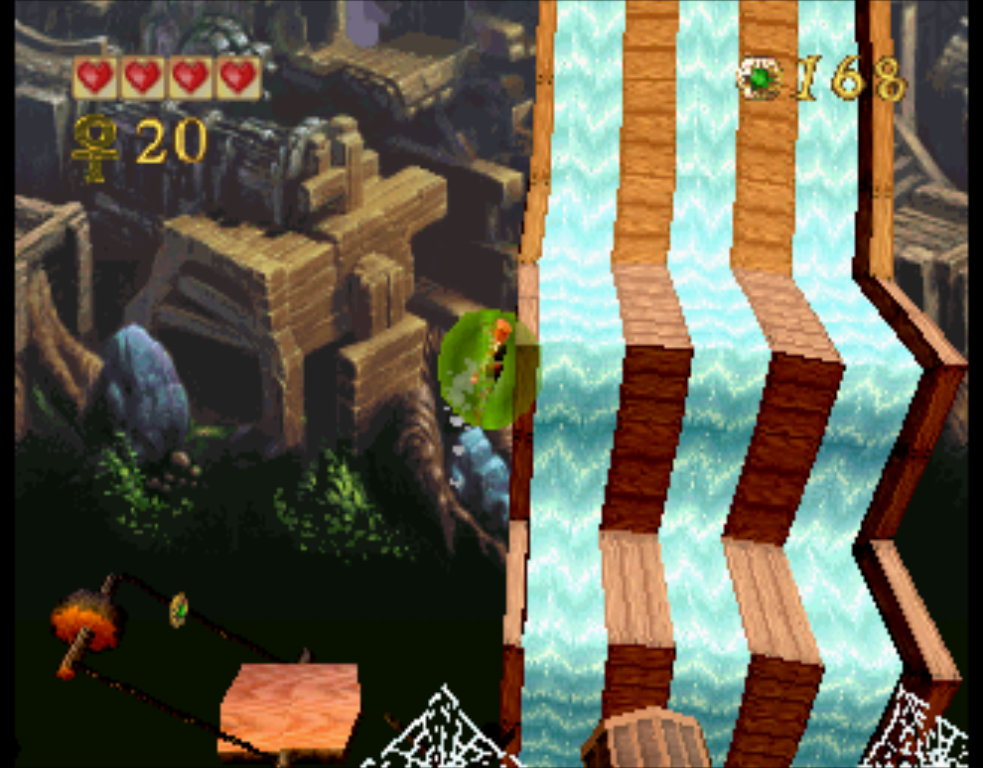 The music is suitable and good half the time, and annoyingly repetitive in the other half. That's not bad enough to condemn the game though. What is bad is the gloriously terrible sound effects.

While the 'boing' jumping sound is annoying, some of the other sound effects are genuinely offensive. In a series of level where some firework things attack you, their screeching sound drowned out the soundtrack and nearly broke my speakers.

Back in the day, I actually player this game a little on the PS1, and had some good memories with it. However, there is a reason I didn't actually complete it, and now I figured out that reason. The initial impression doesn't hold.

Pandemonium is half a good game, with one half showcasing some very good graphics, with good gameplay and sound. However, there is another face to the game, and that's one that is simply boring, with sub-par levels showcasing the most mundane aspects of it's gameplay and production values.

Then there is that SCREEEEECHING sound. 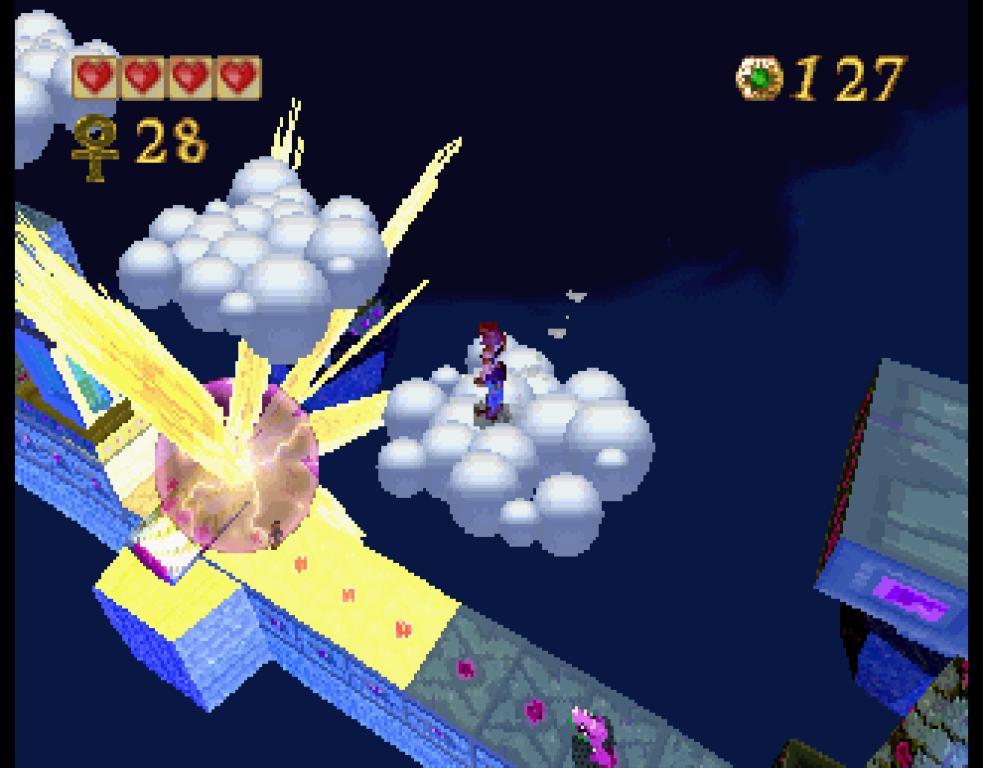 See that glowy orb thing, it doesn't put out as much SCREEECHING as some rockets a fraction of its size

1- Just Pick the Girl.
2- Usually, the safest ways involve jumping over birds to keep at the highest level of the stage.
3- There is no real difference between powerups.
4- There are some permanent power ups that increase the number of your hearts, I stumbled on them by accident.
5- Bosses will probably require you to have more than the initial two hearts you start with.
6- Health recovers only when you die or get some health, it doesn't recover when you finish a stage. 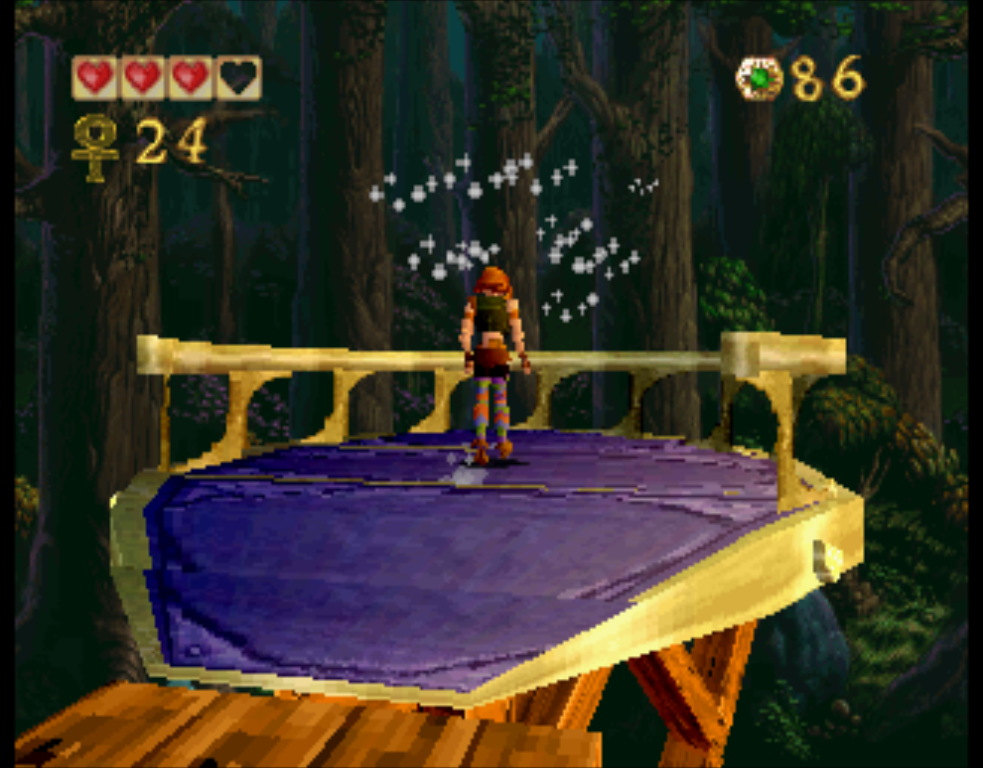 Finishing the stage shouldn't be a relief from boredom

I really wanted this game to justify the good memories I had with it in the past. Now, I realize it was probably not worth begging my Uncle to let me play it then. Probably had to do some chores to get the "privilege".

Next game in the list is the first, but not last, Tactical RPG. At #91, this game has two names depending on the region; Blazing Heroes and Mystaria: The Realms of Lore. Published and developed by Sega, this was another TRPG to rival their own Shining Force series.