Sega obviously rushed the release of the Saturn. Hearing about Sony's upcoming console, they wanted to be first in the scene to try and imitate their early console advantage of the 16bit era. Maybe that is why they didn't have their big guns ready at the start. Specially missing was their newly iconic mascot Sonic the Hedgehog.

Which is why Bug, the titular character of Bug!, was actually conceived and developed as a possible mascot for the Saturn. Both the character and the game were made to represent the capabilities of the new console. That was a big mistake.

Chucking the entire thing into the ocean would have been a better demonstration. 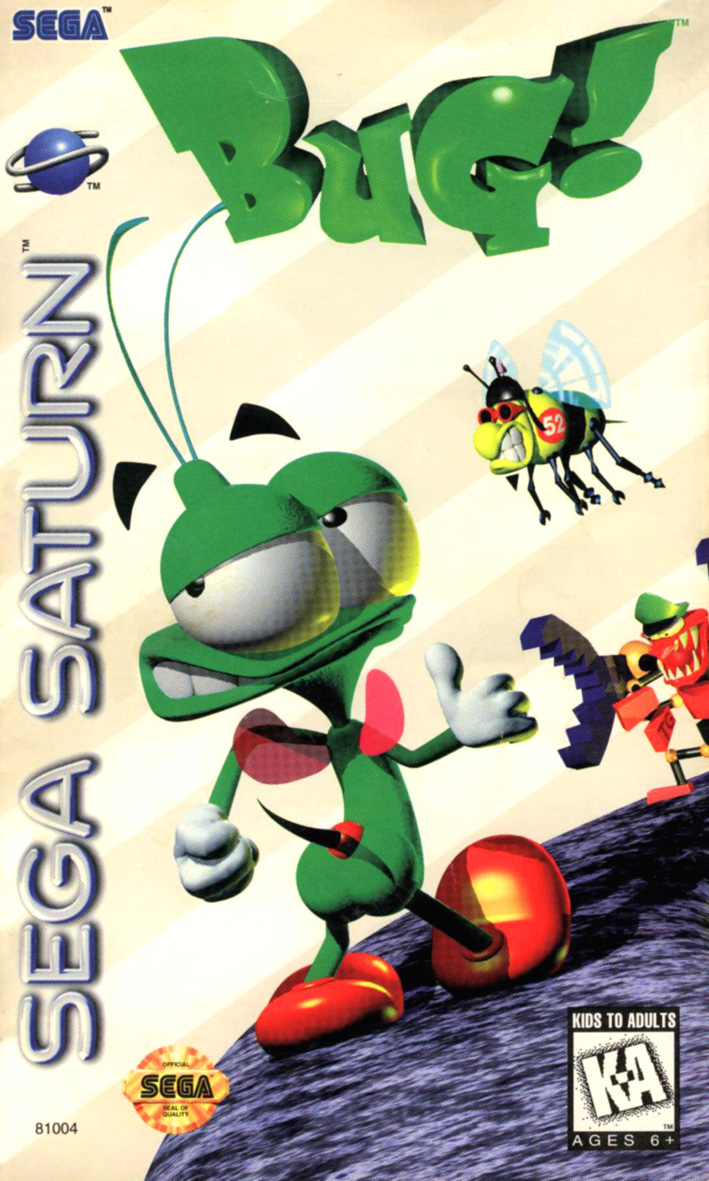 There is a reason humans have a natural aversion to bugs. In trying to overcome that aversion, media like Pixar's Bug's Life try to add some charisma to make us care. Realtime Associate's version of that attempt is making Bug the unlikely movie star of a new Hollywood movie, with the game being that movie.

Maybe, this was a good premise. However, the directors forgot to imbue their creations with any charisma. Bug is a poorly designed insect wrecking havoc, very slow havoc, in a poorly designed world. At best, these characters remind us of C-level 90's kids shows. However, they mesh poorly together, and in an ugly world make for a terrible design. 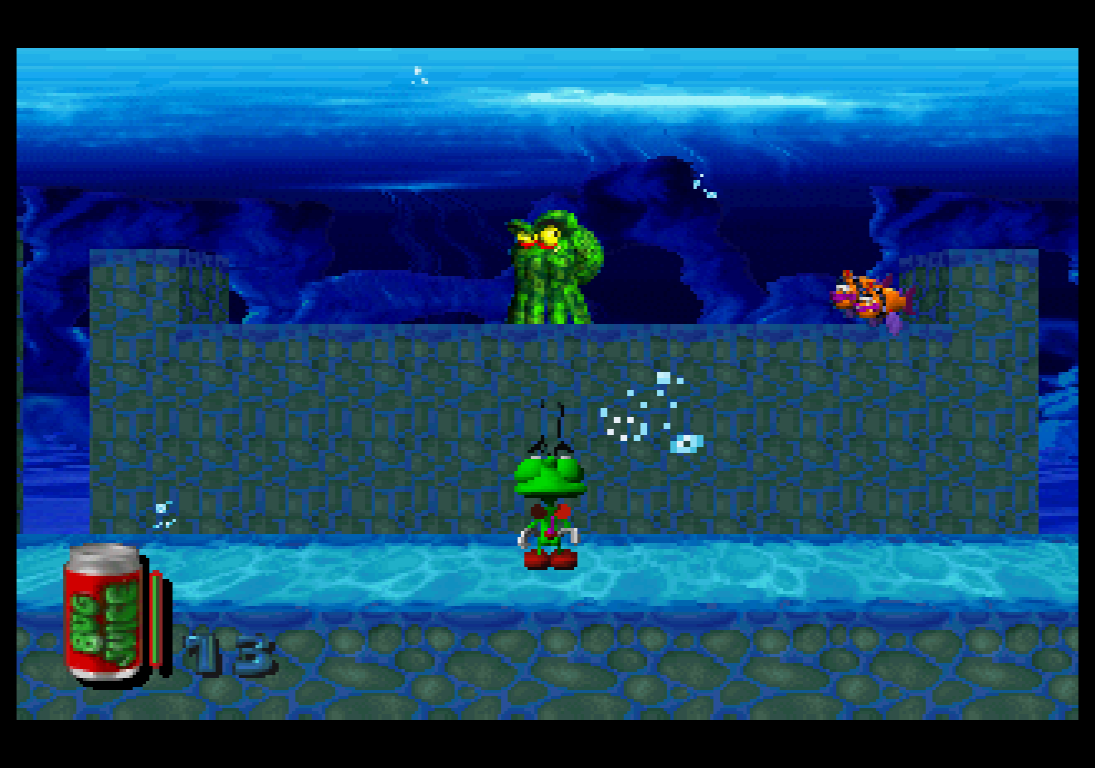 Now we are under the sea, because of course we are

Then was the decision to add some voice acting clips.

Here is where the entire thing falls apart, as Bug's lines cement the obnoxious nature of the game. A hundred times in each level, he would scream inane lines in the most nasal voice imaginable. Kiss these antenna's goodbye, kiss these antennas goodbye, kissss theeesee antennaaaaas goooodbyeeee. Whatever charm the design had completely collapses once Bug sounds his lines (without opening his mouth).

So, the game miserably fails as a mascot platformer from the get-go, because the mascot himself is completely unlikable. The closest I can compare the game' style with is Earthworm Jim. Both have an unlikely creature as a mascot and actually use a similar style and attempts at humor. However, Earthworm Jim manages to craft an entire charming universe where Bug fumbles at the first spoken word.

Maybe, just maybe, if the gameplay was good then the obnoxious shell it is in can be forgiven.

First, credit must be given to the game's technical accomplishments in the beginning of the 5th generation. Bug! is nearly a 3D platformer. I say nearly because there is no true 3D movement. Instead, Bug goes into the traditional 2D axis, but can also go into the screen. Except, he can only move in a straight line in whichever axis he engages with at the moment.

This translates to a psuedo-3D platformer where there is an additional axis into and out of the screen.

Too bad the whole thing is slow, unresponsive, and downright boring. 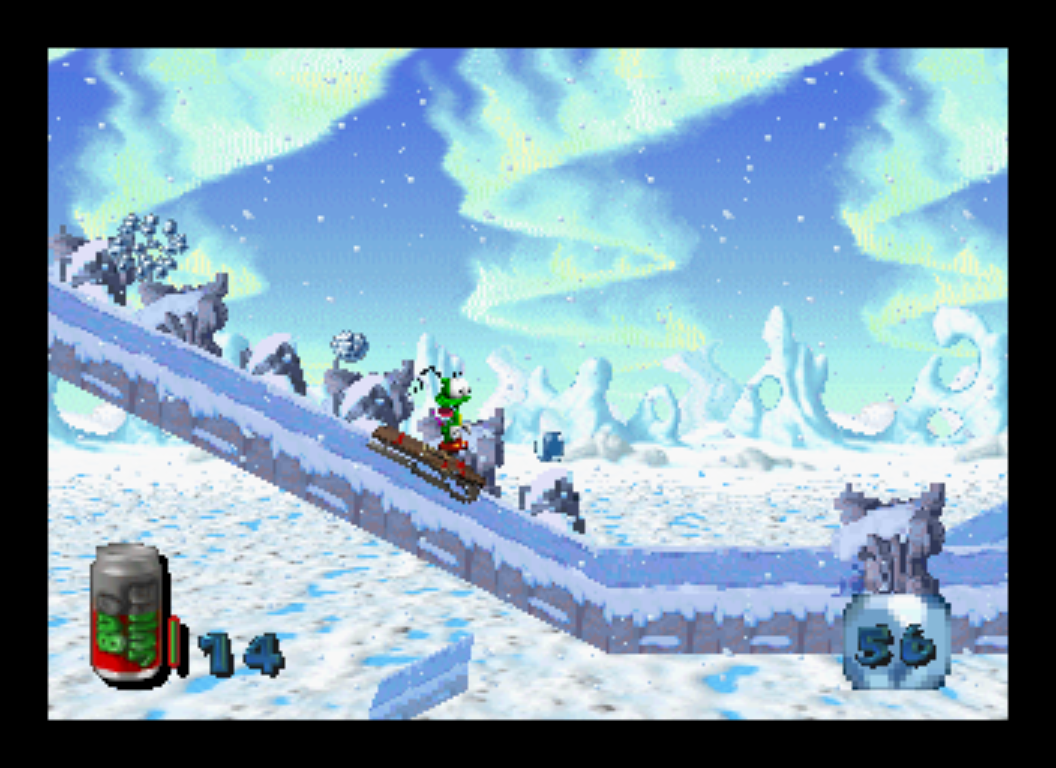 Even skiing is somehow slow and boring

Split into 6 zones, each with three levels and a boss, the game actually has a good amount of content. Bug walks, jumps over enemies, and can gain a spitting powerup starting from the 3rd zone. He also gets access to a timed super mode and a limited zapping powerup. There are also some bonus  mini-games you access by exchanging coins with a zany spider (the only good thing about the game).

It is actually in one of these mini-games where the dullness of the game becomes extremely apparent. In a Sonic cameo, yo are tasked with racing the blue blur and getting the trophies in the way. While Bug saunters forward with his slow animation, Sonic is in the background with his traditional moving fast animation. Except, he is moving as if running in molasses, as if the entire game is played from a slow motion camera.

With its labyrinthine levels, with basic and boring platforming, a variety of technical blemishes, the game is a chore to play.

One highlight could have been the bosses. Honestly, they are well-designed, and the fights against them can be exciting. Yet, there is something fundamentally wrong here.

With its unresponsive mechanics, wonky hitboxes, and general looseness, the game is usually generous with health items. Except against bosses, where they can one-hit kill you and have a ton of health points. 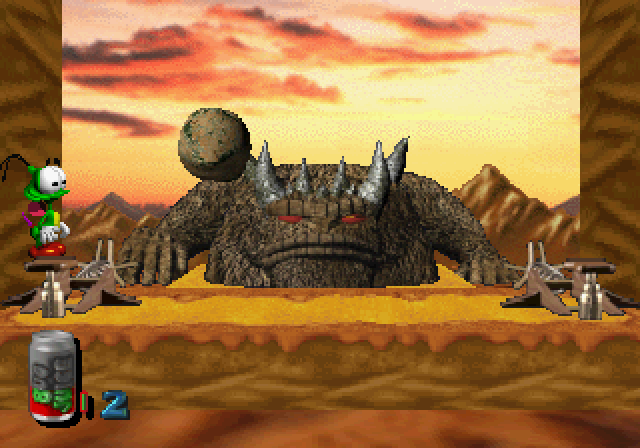 The same fight with a third of its length is exciting and varied. When something good is tripled, it does not necessarily retain its quality. When you consider that the original game did not have a save system (not even passwords), then it becomes doubly insulting that Realtime Associates put in such artificial difficulty barriers between zones.

"And so the story ends"

As an early game with 3D sprites and environment, Bug! can be excused in the graphical department. In actuality, apart from the poor artistic design, the game's sprites are not that terrible. The levels themselves, floating in space with a 2D background in the fr horizon, are not insulting, just boring.

The CGI clips are early CGI, with all the blemishes expected, but there is something historical to appreciate here.

That is clearly what the first reviewers of this game thought. Damn, these are working 3D graphics, and the whole thing can be excused. 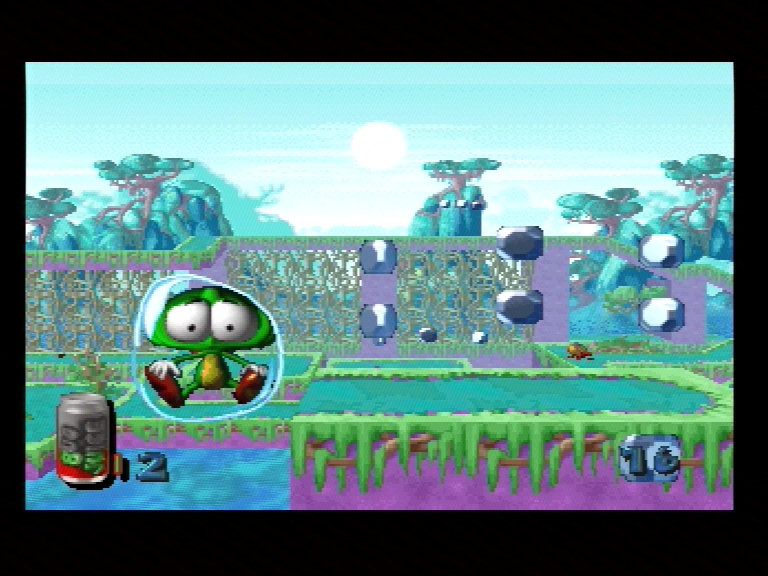 The game's graphics can be pretty funny sometimes

What can never be excused though is the game's poor "musical" score. Clearly influenced by jazz, the game's soundtrack attempt to have that sweet jazzy beats. It fails. Which is not weird considering the game's entire sound design fails. From the nasal sound bites to the terrible sound effects.

Why then would the soundtrack be any good?

Due to its technical achievement, Bug! was actually well-received back in the day by critics. However, it was mostly ignore by fans, and its superior (not very difficult to do) sequel was heavily blasted. 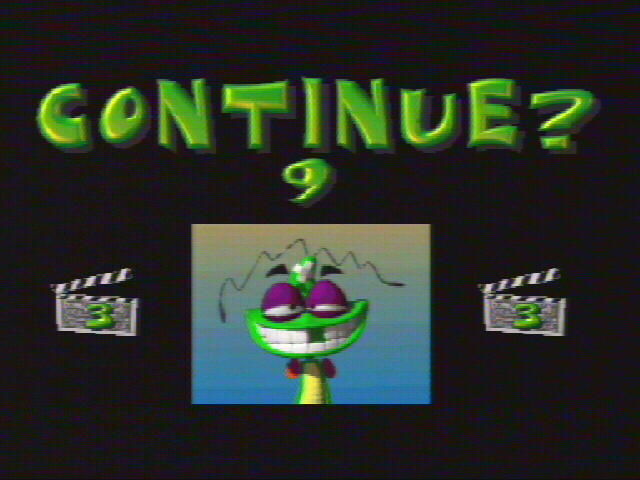 No, for the love of God no

1- Don't play the game.
2- If you are going to play it, try and finish it quickly, no need to "explore" the boring levels.
3- Jump while using the spit attack in order to move and shoot (Bug stops to spit otherwise).
4- Go to the bonus stages to get some lives.
5- Direct your jump after you hit the jump button, this is not like normal better platformers.

I expected this and so I am not surprised. I knew I would start my review series with a bad game, and Bug! is a bad game. Maybe a historically important one, but a bad game nonetheless. Its place in this review series is then s something to compare against, a bottom of the pit, because I do not expect a list of the top 100 Saturn games to have a game that is worse than this.

Next game in the list, at #97 is Gex, another character envisioned as a Mascot to compete with Mario and Sonic. Originally conceived as a a mascot for the unfortunate 3DO console, it was then ported to the Saturn and PS1. The Saturn is generally considered as the better version.