Boardello (Dave Collins/Bubble Bus Software, 1985) sounds like a pun multiple times over. In fact, I believed it's a Game That Must Not Be Named, because it's all too convenient it was this blog of all my blogs that made Dtoid think I'm a bot. (Plus I'd rather believe that than the site software classifying my writing that mechanical and dry.) But enough of that, let’s take a look at what the game is, shall we?

I never managed to start up this game on my MSX when I actively used the system. Having to use a screwdriver to adjust the position of the cassette deck read head to get a sufficiently clear signal was something I didn't know how to do back then. 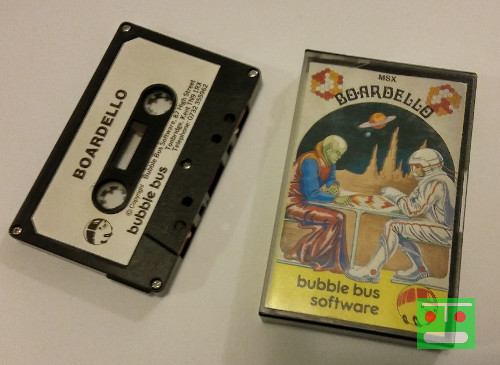 ("Watermark" added just in case some do-no-good thinks this is a good photo to put up on eBay.)

Posh green-skinned alien playing a board game against a spaceman? All garnishing that doesn’t appear anywhere in the game. The game is a board game, but the game the characters are playing have square tiles, which doesn’t match the game either. The boards in the top would otherwise be more accurate, but those can't be reached by using the default initial game state.

This time, the game box contained two screenshots. Even more surprising, they were from the same version as the game… possibly because the other system the game was released on, according to MobyGames, was Tatung Einstein.

The inside cover says:

My previous blog foreshadowed this game: Othello/Reversi really did get proper physical releases back in the 1980s even on NES, and this version of Othello has a fair number of bells and whistles. The description above is otherwise absolutely correct, except for the claim that it’s an original game.

There are relatively few games as recognized as Reversi or Othello; I'll use the names interchangeably in this blog. The popularity is surprising, since Reversi seems to have been first created no earlier than in the late 19th century. 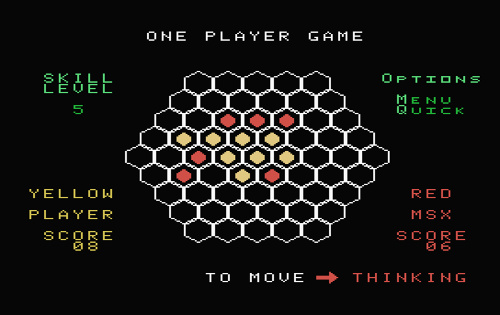 The main difference between Boardello and Othello is that the board is now of a different shape and the tiles are hexagons instead of squares. As a consequence, the positioning of the initial tiles is a bit different as well. 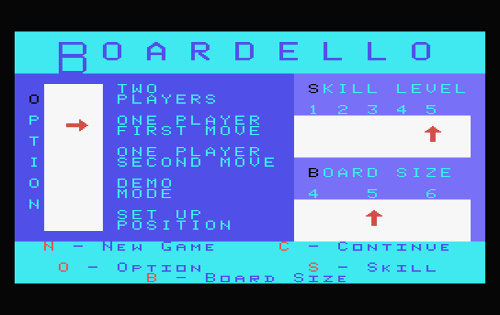 Options-wise, the game is surprisingly robust. Demo mode, one or two players, board size, AI skill level -- all options that can be changed mid-game.

However, the game feels unresponsive. If the player wants to open up the menu, just pressing the M key isn't enough: it has to be held down. The same with the menu options. There are no such problems when moving the cursor on the board, though, but the cursor always starts from far outside the board and doesn't move in full tiles but pixel by pixel.

The AI also takes its sweet time. On the easier difficulty levels, the computer plays their turn without long waits, but with the skill level set to max, a turn can take a full minute. That is a bit much. On the mid-difficulty level, one turn takes about a second or two and the second-best level about ten seconds. There's an option to force the AI to make their move, though. I gave the second-easiest skill level a go, and just by remembering to take the corners and avoid the tiles adjacent to corners, I defeat the opponent handily. Mind you, that's about all I know about the strategies for Othello.

As for the audio, when reviewing retro titles knowing all traditional songs would be very helpful. In this case, it's a song that I know I've heard before, but can't recognize. That's about it. Even when the player tries to place a piece at an unallowed position, a probably recognizable ditty plays out in glorious monophonic sound.

At this point, I’ve probably said everything you want to know about Boardello in an excessively verbose manner. You hopefully also spotted that I didn't play this game extensively: do you really want to read a review of an Othello clone from 33 years ago? If you want to play against a competent opponent in Othello, you'd play something on a present-day platform where the moves don't take as long.

So let me approach the game/topic from other directions.

I'm not arguing here that Othello is worth that much money (now). I'm arguing that it could've been back then. Another alternative was to type in any of the numerous Othello games from magazines or books; I remember having done that twice myself.

But a more interesting question is why the perceived value of Othello has dropped. Because it's so easy to make one yourself? Because there are free versions all around and require no effort at all to use (as opposed to typing in the game code)? Because there are more complex games? Because these games don't have the glitz and glamour? Because the core game itself isn't as fun? Because people on this site are less likely to care about old board games than others on average?

Questions I don't have an answer to.

Reversi really feels like one of the games that has been pushed aside by the video games and more recent board games. HAL Laboratories made a version of Othello for NES, there was a version for Gameboy, and as said, even Switch got a digital version of it in March 2017. Unsurprisingly, Destructoid didn’t review it; only a handful of sites did.

Computers have been superior Othello players for years now: in 1997, an AI beat the world champion in six out of six games. I wouldn't be surprised if the AIs microcomputer versions of Othello in the 1980s could put up a good effort against people, either.

So far, the game hasn't been solved, which means it's not known what the outcome is if both players play a perfect game. This means you don't want to have WOPR play Reversi instead of Tic-Tac-Toe... if that were an option.

Remember the one minute the CPU may take to decide their turn? Well, Chessmaster on SNES could use ten minutes. Different game and more complex, yes, but this should give some clue to how long turns could take in those times.

Boardello isn’t lacking in features. For a game of that era, I don’t know what else the game could have missed without giving the whole hexagonal Reversi thing a miss altogether.

But in the end, it’s still just a hexagonal Reversi.

(And the reason this blog was being marked for spam was because I wrote the 19th century a wrong way.)