Flew too close to the sun

If there's ever a game where my opinion goes against the critical reception, it's Owlboy. Its release in 2016 was met with overwhelming acclaim from critics, with an average review score of 88%. The indie darling of the year, and a strong showing for "hi-bit" graphics, the future of retro visuals.

I had an absolutely dreadful time with Owlboy. Its visuals are certainly top-class, but I had so many issues with its writing and gameplay that it's difficult to keep track of them all. Which is why, after dropping a brutal 4/10 review on Metacritic and a few rude comments on this very website, I've never actually commited to a full, fleshed-out review. Until today.

The hell's an Owlboy anyway

Owlboy can be considered a platformer, by the loosest definition of the term. It's a game where you fly around, collecting and shooting and moving and collectiong stuff. Owlboy's gameplay loop mainly consist of avoiding enemy projectiles and stationary spikes while floating around from point A to point B. 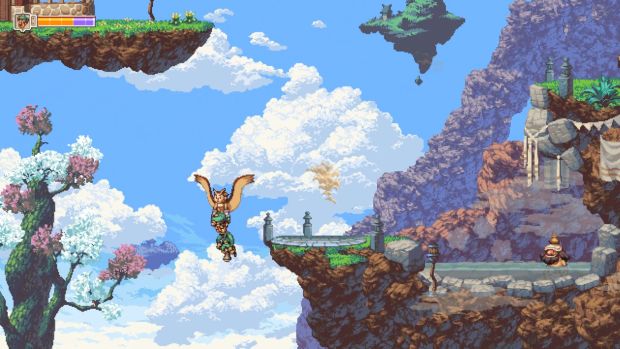 the first thing bothering me with Owlboy is its arbitrary Gameplay rules. The game likes to introduce a lot of gameplay ides that never get fully fleshed out. One of the last sections in the game is a Flappy bird ripoff that only is used ONcE in the entire game. Likewise, there are        lements that fail to be fully realized, like companions that re only mapped to a 1 button wh

Th▯re's nothing wrong with re
using

Today I turned 18. They say it's the turning point when I’m supposed to become an adult. To tell the truth, I feel the same as yesterday. I don’t see what the big deal is.

All I got was a boring day like usual. Wake up, breakfast, brain scan, private lessons, lunch, training, TV in my room. I don't think anybody but Susan commented about it either so uh... Happy birthday me?

I'm not even sure why I keep a diary at this point, nothing ever happens here. The last time I saw someone new in here was... 2 years ago? I keep hoping I'll see someone I haven't seen before, but it's always the same guys. They all suck.

This bundle of joy is named Lucie. Short, frail, sleep-deprived. It was her 18th birthday, not that time had any meaning for her anymore. The young lady has been part of the Institute as long as It existed. So, unsurprisingly, she grew to resent the white walls that corner her every day.

It's not even that the Institute treats its guests poorly. Quite the contrary, it is built on systems resulting from long-lasting obligation and guilt. In their legally grey area of operation, those in charge could get away with standards of living much below the average Canadian household. And yet the corridors are pristine, the lavatories were in pristine condition (and lava-free), the food more varied and healthier than you would expect. The monochrome interior design wouldn't feel out of place in a modern prison. Yet everything else is more akin to a resort center... One you cannot leave.

Part obligation, part guilt. Staff members get to return to their families after every day of work. This leaves most with a feeling of unease that drives them to treat the Institute's guests with utmost care. Even upper management takes decisions that are far riskier financially than necessary. There's no need to give every guest the ability to call caretakers at any time from their room. There are far cheaper sources of entertainment than current movies, games and TV series.

Part guilt, part obligation. There was really nothing more dangerous than an unsatisfied guest. Sun Institute understood all too well. And on this 21 of May, one guest was getting dangerously unsatisfied.

"And this", the young lady said theatrically pointing at her diary, "is exactly why we need to get out."

Silence. Lucie was used to being alone, but her frustrations were targetting someone that day. She knew she'd get a reply eventually. And thus, she waited. It came naturally. After over a decade of waiting, you end up being exceptionally good at it.

She looked around, heaving a theatrical sigh. Her living quarters weren't huge by any stretch of the imagination, but they were clean like the rest of the building. The white walls gave way to a large arch separating the beds and restroom from the kitchen, and another leading from there to the television room. The entire thing was laid out in a 2x2 pattern. Efficient. Not the safest layout in case of fire.

No answer yet. Lucie's eyes wandered to the kitchen, where torn uniform bits and pieces laid on the table. Was Susan really okay with living here? Was her desire to leave that weird?

Further silence still. The sound of dripping water that had become background noise finally come to a stop. A tall girl, on the cusp of adulthood, peeks from behind the bathroom door. "You were saying?", she asked with a smile... Susan had a pretty good idea of where this conversation was headed, however.

"We need to get out", the shorter one says. Susan's smile wavers for a bit.

Guests don't stay here forever. Lucie knew that. She's been told that, so many times. But she's never seen anyone leave either, and a decade of waiting has a toll on your patience.

"Nothing, that's the problem...", she begins. "Every day's the same. Nobody even wished me happy birthday today..."

Silence once more. It was the topic Susan expected, but it was a bit more relevant than usual today. Figuring out a way to calm down her sister would be tricky. "Well, I did.", she jokingly says, breaking the silence. "And I didn't even get my own happy birthday."

"I said you too...", Lucie practically whispers. It was a lame celebration, and she knew it. Before they could linger on that for too long, she returned to the original topic. "Surely you've felt it too! The same rooms, the same people, the same routine. Imagine all the new things we'd see if we could lea--"

She knew she was sounding like a broken record, so she stopped. She just looked at the other person in the room instead, her eyes pleading for a sign of approval.

"Do you think you've really seen all there is to see here?", she received instead. "You always eat with me at lunch, for example. Why not see different people? I think you'd feel better if you start trying out different things by yourself... Change doesn't come by itself."

"You really think this will help me?", the small one asks, defeated.

"It doesn't hurt to try", the tall one says reassuringly. "In any case, I'm going to sleep. Try to have a good talk with everyone starting tomorrow!", Susan says as she turns off the lights.

Lucie would have loved to get a good night of sleep as well, but she knew it was not going to happen. Careful to not make any noise, careful to not switch on any lights, she heads to the television room. Since movie night is going to be silent, to begin with, she selects a couple of foreign movies and starts watching absent-mindedly.

Eventually, even she is unable to resist her exhaustion. After a slow, careful walk back to the room the two sisters share, she collapses in her bed.

She twists, turns, clenches her teeth. Her breath accelerates, her knuckles turn white from her firm grasp on the mattress. Her eyes burst open. She wants to scream, she wants to vomit. Her eyes dart in all directions. Breath in breath out breath in breath out. Sister's asleep, can't wake her up. She looks up at the ceiling. She bites her lip and stops breathing, just for a bit.

Lucie finally calms down. It's just that nightmare again. She's just being a child. Again.

Tears fall down her face. Another sleepless night ahead. On this beautiful month of May, a young woman cries while waiting for a sunrise she never gets to see.