"At least they're just Sectoids."

NOTE: I think the screenshots may be too stretched -- I may or may not get them to look more like what I see on my TV now.

Of the games I intend to cover, Laser Squad (Target Games/Blade Software, 1988) is probably the one known best. Or at least its designer Julian Gollop is. By total coincidence, it's been 30 years since the game was released. 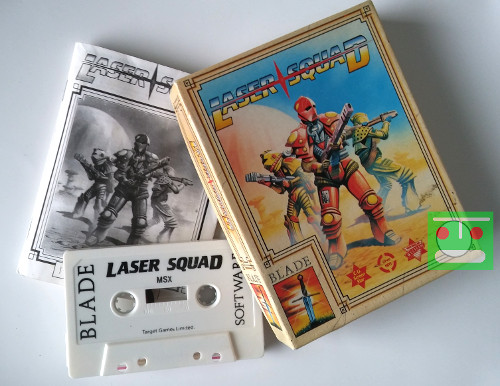 Game case, cassette and the player's manual. I  edited the "CBM-64" text away from the circle under the reprohead; the sticker with "MSX" over it had worn off over the years.

Here's a problem, though: I'm hopeless with the game.

In three or four turns of the first time I tried the game (two after finding the first enemy), I learned the following things:

The second try, in which I decided to use a rocket launcher to blast open the side of the building and have snipers pick up the revealed enemies, taught me this:

Like with Boardello (Dave Collins/Bubble Bus Software, 1985), which I covered in my previous blog, I never managed to start this game either on my original hardware. Decades later I heard that it was very buggy in the first place and didn't like working on multiple systems. That's software exchangeability for you... or maybe the read head was again misaligned. 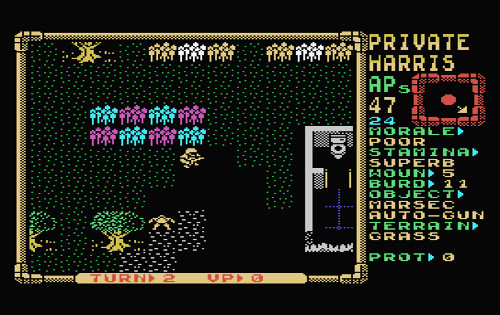 My second attempt with the rocket launcher -- only two died instantly this time. Note the destroyed walls.

Each of the scenarios can be played with one player or with two players taking opposing sides (hotseat multiplayer). The scenarios have varying targets, from helping captured soldiers escape to assassination. As is typical of the age, most of the story is in the manual only, and even then just in describing the scenarios.

With the scenarios being independent and them being playable in any order, there's no connecting plot or carryover between missions. All five scenarios have their own maps and a varying number of difficulty levels.

The way the game plays out will sound very familiar: the player picks which unit to move, uses tank controls to move them while spending action points. Autoguns have autofire, snapshot and aimed shot options, each with varying AP costs and accuracy. If more than half of the APs are left over when the turn ends, the character can use opportunity fire to shoot at an enemy if they are spotted during the opposing side's turn.

The levels are also destructible -- equip a rocket launcher and you can make your own door in the building's wall. 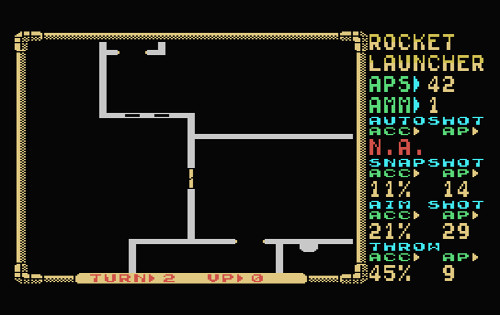 The cursor is not visible in this image, but I'm hoping to hit the broad side of the house with an aimed shot.

Furthermore, when the units die, they spin around before keeling over. When they panic, they tend to drop their weapons. The aliens in the Paradise Valley scenario are called Sectoids and some weapons are manufactured by Marsec.

That's no coincidence: the designer Julian Gollop's follow-up game (after Lords of Chaos in 1990) was originally planned to be Laser Squad 2, but in the end that changed form to become UFO: Enemy Unknown (Mythos Games/MicroProse Software, 1994), or X-COM: UFO Defense if you live in North America.

Since I'm such a bad player, I don't know if the AI "cheats" or not. Regardless, making the game very difficult was a smart move. The scenarios don't take that long to complete and there aren't many of them.

The map layouts are fixed, and while the player can see all the walls in the map, the opponent's units are hidden until they are in player's units' line of sight. This might come across as something completely obvious today -- so much so that I didn't realize it until I read some reviews for the game -- but maybe not so much back then. 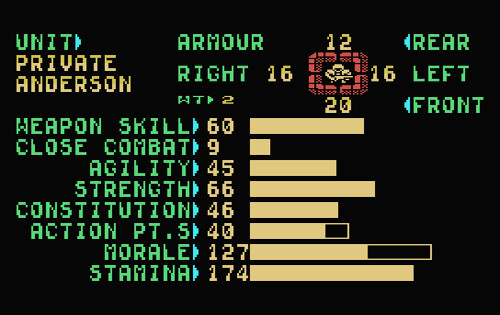 The character stats are also quite detailed. And after meeting the droid with front armor rating of 100, the player will understand why different armor ratings matter. Especially since that droid can shoot explosive rounds accurately enough.

The manual is pretty thick and has the same instructions on multiple languages. While it doesn't serve as a copyprotection scheme, it has not only the actual backstory for the scenarios but also a page full of equipment stats like weight, AP cost to fire, which ammo the weapons use and so on -- info that today would be at minimum in-game tooltips.

I'm impressed with what the player can do in the game: they can destroy windows easier than walls, cause chains of explosions or pick up equipment from dead allies and enemies. There are doors that open for one player but not the other.

Laser Squad on MSX is a very direct port from ZX Spectrum. This means the audio is limited to thuds when making a selection, not that the C64 version sounded like it had any music either. At least the Amiga version does.

As for the graphics, the MSX port didn't take advantage of the better graphics capabilities, nor did the C64 version from what I can tell. So while the box I have of the game says it's a C64 version (and the MSX label really was just a sticker over that and another barcode sticker in the back) and the back of the box doesn't say what version the screenshots are from, they're close enough to all three systems.

To see the mission that got me killed so quickly, here's the same mission successfully completed on ZX Spectrum by someone far better than me. Barring slightly different colours, the game looks the same as it did on MSX. Almost sounds like it, too.

There weren't many turn-based tactics games of equal quality in 1988 on the systems popular in the West at that time. There were even fewer where single characters were controlled: HeroQuest (221B Software Development/Gremlin Graphics, 1991) and Space Crusade (Gremlin Graphics, 1992) would be released only years later. It should be no surprise how well-liked Laser Squad turned out to be.

The same year saw the release of Pool of Radiance (SSI, 1988), an AD&D-licensed game and the first in the Gold Box series. While that game saw critical acclaim as well (you can watch ProJared played through it in 2016), the battles aren't independent but a part of a greater adventure, but they also come across as simpler than the battles in LS.

How does LS hold up today? I can't confidently say, since outside of Mario+Rabbids: Kingdom Battle (Ubisoft/Nintendo, 2017), I haven't really played this type of games after X-Com: Apocalypse (Mythos Games/MicroProse, 1997). The obvious differences are that Laser Squad has no half-covers, elevation differences or crouching.

The lack of worldbuilding outside of the scenario backdrops hurts Laser Squad, as does the lack of connection between the scenarios. While the eponymous Laser Squad appears in three scenarios as a force fighting against corporations and the Empire, there's also talk about rebels and Rebelstar -- an obvious reference to Gollop's earlier Rebelstar series of turn-based tactics games. (The 1992 DOS port of Laser Squad appears to have pretty nifty cutscenes.)

The lack of music and few sound effects don't hurt it much, if at all. Graphics also serve their purpose well enough.

Being restricted to a digital joystick or keyboard instead of a mouse was the biggest hurdle I had to get over in playing the game, but even then, the only time the keyboard is really needed beyond up/down/left/right/fire buttons is when selecting the scenario. This was even a massive blessing: there was zero need to learn keyboard commands to swap between characters, start firing and so on. As a result, the controls work very well.

In conclusion, I found the game to be surprisingly good even today. Each time I've played something entertaining happened -- be it me panicking and shooting down both my ally in front of me and the enemy, throwing a grenade to blow up a room full of target equipment and finding out the last surviving squad member can't get out in time, backing out from open to find out there's an enemy in the tile right behind the unit and I'm all out of APs...