Yellow News - Game Journalist in Trouble for Negative Review of 1938 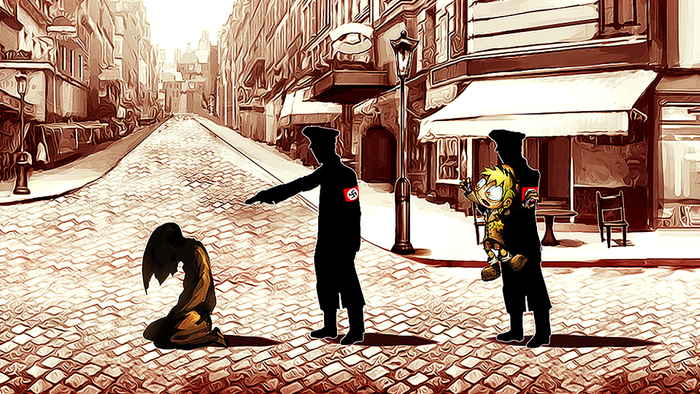 A review by Jed Walker at Games Splat of Holocaust title 1938 has led to widespread controversy, with many commentators claiming it “missed the point”.

The review is the most positive in its introduction, as it lays out the video game’s objective. “1938 is a game set within the grim days of 1938, as you play as a Jewish, black, gay or political opponent as you enter the concentration camp. You then must steal, ration and bargain your way through each day, avoiding starvation, disease and execution”.

From this point onwards Walker begins to describe the experience as “excruciatingly boring” and “patience-testingly hard, as even random chance can kill you instantly”. He confesses that “the aesthetic carries a weighty bleakness” but that after the first few hours it becomes “just greys and browns” and “a never ending ugliness, like staring at the smug orangutang that is our president”. Walker then ends the review with a 25 out of 100, commenting “[1938] fails at even the most basic tasks a game should achieve: It isn’t fun, it isn’t nice to look at and it isn’t fair”.

Since publication the review has created a controversy that has spilled out onto the internet. While a few accuse Walker of not completing the game or “having no fucking idea what [he’s] talking about”, most focus on the possibility of Walker missing the point of 1938.

Charnel Dansky, of Youtube channel Historical Gaming, comments: “The Holocaust was a miserable time, butchering lives both inside concentration camps and in too-small ghettos by breeding widespread disease, famine and atrocities by design. We focus on the Jewish deaths, each one tragic, but leave forgotten the many other lives crushed by the war-crimes in central Europe. I believe 1938 is a game that is rightly not fun, perhaps it is even one of its greater qualities after being informative, as it better teaches our past to future generations to learn from. The atmosphere chokes the player with empathy, reminding us that those so easily stomped upon are human too. It informs us, through play, that the suddenness of death within heavily oppressed societies only adds to the fear, torment and oppression within such places… I believe to focus on 1938 as a traditional game, while understandable, is to miss the objective of the developers.”.

1938 is out now on Steam, Humble Bundle and Good Old Games.

Yellow News is a satirical series, involving not only making fun of videogames and their culture but also making observations/points about it. I'm sorry if the above satire piece caused any offense. In addition, I wish to give credit to Luc Bernard, as the banner image is Imagination is the Only Escape, unreleased game about the Holocaust. I'm sincrely sorry if I fucked this Yellow News up.