Why Sonic the Hedgehog?

After all of my opinion pieces and guides, I thought I’d talk about a little about myself. Specifically, why I chose Sonic the Hedgehog as my avatar and persona, despite being a bigger fan of Nintendo. I’ll also go into the “429” part of things. So, if you’re curious, keep reading.

It all started back in 1999, I got a Dreamcast for Christmas that year, it was my first console that could go online. We had dial up back then, so things were rather slow. But the fascination of being able to go online could not be resisted. A lot of people don’t realize the Dreamcast actually bundled with a fairly good (for the time) web browser. Sure, you couldn’t really download much, but just being able to look up cheats on a web page, read/send emails, and play online was a huge leap forward. It was at this time I needed to create my first screen name. Seeing how it was for a Sega system, it only seemed right that I chose Sonic.

My original screen name was sonicfreak429, but shortly thereafter, I thought the “freak” part was a little on the nose, so I cut it. In hindsight, it’s just about perfect, it’s short, easy to spell, and associates me with gaming. Additionally, it has the added benefit of being from a defunct hardware manufacturer. If I had chosen Nathan Drake, Master Chief, or Link, it might lead someone to think I was a fanboy, or at least bias from the outset. Granted the first two didn’t exist at the time, but you get my point. At least now they have to figure out my biases instead of assuming it.

The “429” came from my Christian days, I was 14 when I joined the local youth group. One of the first lessons I remember my youth pastor teaching was on Ephesians 4:29. The verse is about not verbally tearing each other apart but building each other up. For whatever reason, it just took off among the youth group, and we started using the verse to correct each other when someone would get out of line. And it became what Christians call a “life verse” for me, I needed a number (because simple screen names are always taken) and this seemed as appropriate as any.

Those of you who know me, know that I’m no longer a practicing Christian, and now consider myself an agnostic. The inevitable next question is: why not ditch the “429”? Well first off, I stopped practicing Christianity in 2009, so at that point I had the screen name for 10 years, it’s far too much a part of me to change now. Secondly, I don’t want to forget my past. Despite the short time I knew him, my youth pastor had left a very positive impact on my life, to this day he was the best example of what I think a Christian should be. So, it’s kind of my way of honoring him.

It's kinda scary how this all fits together...

Over the years, the Sonic franchise has gone through some radical changes. Originally, Sonic was an icon of the 90’s. If you look at Mario, he has a timeless quality, you can only see the 80’s aesthetic in the original artwork, but even today, it’s pretty obvious the era that Sonic came from. He’s got the attitude and isn’t afraid to show it. Even still, Sonic never had a whole lot of character development until Sonic Adventure in 1999. Looking back now, that seems to be the game that separates classic from modern Sonic.

When I first opened my Dreamcast in 1999, I got a copy of Sonic Adventure with it, and it blew my mind. It was the most ambitious game I had ever played at the time. The graphics were stellar, the levels were huge, and the number of things you could do was very impressive. Much like Mario 64 for the N64, it was fun just to run around in the overworld, this was the next level for 3D platformers. To this day I adore the genre.

Looking back now, I can see the flaws. The camera was atrocious, voice acting was worse, progression was made unnecessarily difficult due to cryptic puzzles, and let’s be real here, fishing with Big the Cat was a real drag. It might not have aged well, but I feel like it was a great game for the time and laid a lot of the groundwork for the series.

The reason I bring up Sonic Adventure is the most important things it did was give Sonic a personality and world. Say what you want about how much better the classic Sonic games play, they simply can’t offer that. Their appeal is in their simplicity and accessibility, the story, the world and characters are nothing to write home about. Conversely, modern Sonic has a sizeable cast, each with their own personality. Sonic Forces reminded me that Sega hasn’t forgotten about all these storylines they put out. Now I’m not delusional into thinking that the world of Sonic is as involved as games like Legend of Zelda, or Assassin’s Creed (it’s more akin to a Saturday morning cartoon) but that doesn’t stop it from being a fun and inviting world.

In my mind, there’s just not enough middle ground between kid’s games and adult games. You go from Lego, Skylanders and Just Dance, to Doom, Call of Duty and Grand Theft Auto. Sega and Nintendo are some of the few companies who put out quality games in that middle age range. Western developers can’t seem to understand that I don’t want to be pandered to, but I don’t always want all the blood, guts and language. Games like Jet Set Radio, Street Fighter, Metroid, and yes, Sonic, seem to have that teenage appeal without all the mature content.

The next inevitable question is: why associate myself with a series that has such a roller coaster of releases and such a toxic fanbase? Well first off, I love it when a developer tries new things, and the Sonic series has tried so many different things. Not all of them work, but some do. The thing is I can identify most Sonic games easily from just a screenshot or short gameplay video. You can show me games like Call of Duty, Battlefield, Need for Speed, Assassin’s Creed, or basically any annualized sports game, and it’s hard to tell them apart. Sonic may not have consistency, but it doesn’t have an identity problem, that’s for sure.

The community is something that I just have to deal with. There are communities that I am technically a part of, but don’t associate with because I’m not like them. I can agree with someone on a particular viewpoint, but that doesn’t mean I adopt their entire philosophy. It’s never wrong to walk on the right path with anyone, but it’s never right to walk on the wrong path with anyone. No disrespect to the furry community, and if you love writing Sonic fanfiction, more power to you, I just want to play the games.

The final question is: why adopt the persona of Sonic? That was actually never my intention, it happened because of fellow Dtoiders. I’ve gotten quite a few comments about “going fast” and “Sanic” that I decided to embrace it. I never realized how much I was like Sonic. I do often go fast, I read articles too quickly and miss important facts. Then I post about it, and you guys are quick to point out my oversight. Moreover, Sonic is 15 years old, and I consider myself a teenager at heart. I’m kind of naive, but I have good intentions. I’m not really mature except where I have to be, I’m also very opinionated (with quite a few unpopular ones). I don’t exactly have girls chasing me, but I do have a younger friend that’s a sidekick of sorts. 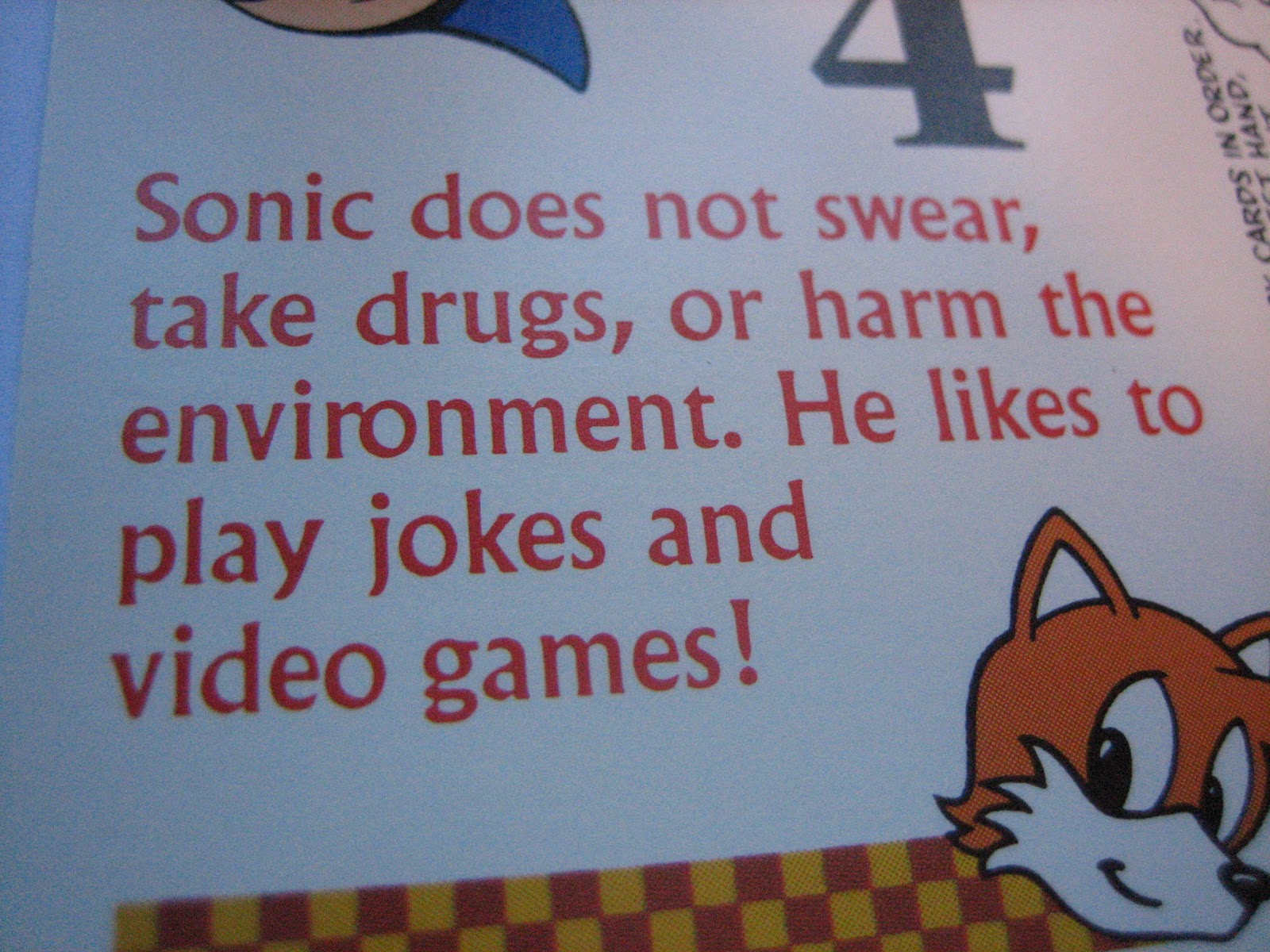 I don’t even really need to get into my love of chili dogs (we call them conies here in Cincinnati) or my love for teen focused pop punk and emo music, I think you get the point. So, what do you guys think? Do you have a character you associate with? What's the story behind your screen name? Sound off in the comments below.