If you have some common knowledge of modern video game trends, then I'm sure you are well aware of what Monster Hunter is. One of Capcoms's finest franchises, (and most popular), the series has made its way back to home consoles, landing comfortably on the Xbox One and PS4.

Monster Hunter World is on fire. No, seriously, it's selling like hot cakes, topping 5 million sales in less than a weeks time. That's insanely unheard of, and very promising for the series and Capcom. Obviously, the hype train is rolling along with a lot of steam, but the question is, does the game live up to said hype?

I must admit, I've never been a die-hard fan of Monster Hunter. Yes, I've played a couple of entries on the 3DS, and I certainly invested a lot of time and effort into the games. I like Monster Hunter for what it's worth, but at the same time, I've never been head over heals for it. It's a game that truly appeals to a specific kind of gamer, and there's absolutely nothing wrong with that.

World does a fine job of bringing the series back to home consoles. Aesthetically, it's a wonderful looking game, with great detail in lighting, colors, and general resolution. I'm playing it on the Xbox One X, and I'm enjoying all the fine tuned details quite a bit. I've no doubt that the game looks every bit as good on the base Xbox One and PS4 as well, but this is certainly one of those games that makes you appreciate having a 4K TV that supports HDR.

Systematically, the game is still a little buggy. While PS4 owners seem to be getting along with few hiccups, the Xbox version of the game is still struggling to get online play figured out. Yes, I've been able to get into matches with my friends online, but that was through game invites via online friend connectivity. If you're looking to jump into the hunt with random friendos on the Xbox Live, Capcom still has a few bugs to work out. 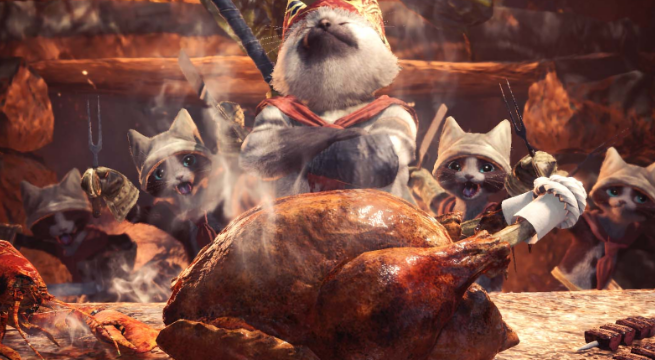 Gameplay wise...well, it's Monster Hunter. Collect missions > eat > hunt > build monster swag. Rinse, and repeat. No matter what your console platform, you can expect the game to function at a serviceable 30fps, which is nothing out of the ordinary for 3DS users. The game has made hunting beasts down a bit easier, now that you can track down prints and clues to help you pick up a trail that will ultimately lead you right where you need to be. The fact that the map never has to load between areas makes the chase all the sweeter as well.

However, as I stated earlier in this write-up, the series truly appeals to a fairly specific kind of gamer. Do you have the patience to run around for 15-20 minutes (or more), chasing down a monster, sharpening you blades, watching your health, and hacking away with a fairly awkward combat system? Do you mind grinding through the same hunt, over and over and over again until you finally get all the materials you need to make a specific weapon? If any of this sounds too tedious or time consuming for you, then I'd advise you to think twice before picking this game up.

I really can't urge gamers enough to look into these details before jumping in blindly. Yes, this is probably the most user-friendly Monster Hunter to date. Yes, the game is getting massive hype and has already sold over 5 million copies worldwide. That being said, there are many elements of this game that simply won't appeal to certain gamers, and many users will find themselves overwhelmed and probably frustrated if they don't know exactly what they are getting into.

Is Monster Hunter World a good game? You bet it is! Does it live up to the massive hype that it has received? Well...that's really up to you. It will impress you visually, and it will leave you with a feeling of satisfaction unlike any other after taking down a massive beast. It will also frustrate you to no end at times, and eat up huge chunks of your free time. I implore you to look before you leap if you're still one of those people on the bubble about getting this game. If anything else, at least take solace in the cuteness of your Palico partner, and make sure to pet your precious Poogle juuuussst the right amount of time!

Hey all, thanks for reading my impressions article! I haven't abandoned my Anime Reviews (not by a long shot). By the end of the week, I'll have a review out for Devilman Crybaby (recommended by Occams himself). Thanks as always for checking out my work, feel free to leave comments/feedback below!