Minigame compilations were a thing well before the Wii; I've mentioned Cassette 50 before. But then there's also this one: Can of Worms. Isn't that a promising name? And isn't this coverart something that makes you want to play the game? 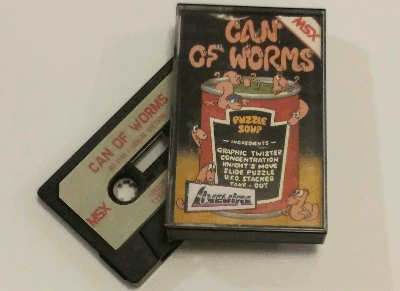 There are no screenshots at all, not on the back or the inside cover. The back of the box states:

For all standard 32/64K machines 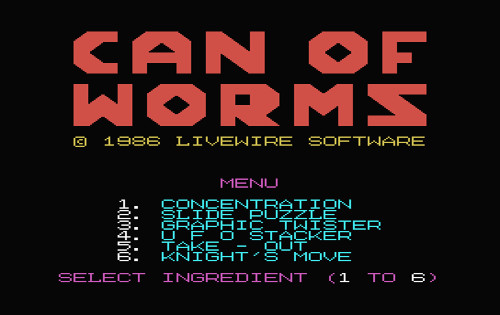 (All screenshots are from an emulator, stretched to my understanding of what they look like on a 50Hz PAL display. I didn't check if my original tape loaded or not.)

MobyGames has an entry for the game for the Commodore 16 and Plus/4 systems, by Kew Enterprises, who have nothing else listed to their name on the site. The MSX version has no mention of Kew Enterprises that I could spot, so I imagine this is a port and made by someone else.

So, the minigames. There are six of them, most of them being pretty throwaway, but some are actually fun. Here are the games from worst to best (in my opinion). 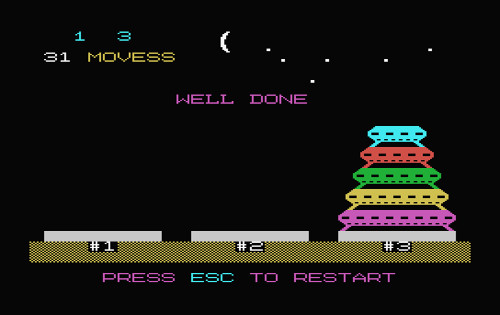 This is Tower of Hanoi. If you don't know the puzzle, the idea is that you have three poles, and a number of disks of decreasing size in one. The goal is to move the disks from one pole to another so that only one disk is moved at a time and that no disk may be put on a smaller disk.

This... isn't particularly challenging. There's a simple formula to tell the optimal number of moves needed to perform the task. Plus the variation here doesn't even let the number of disks (or UFOs in this case) to be changed. Of course, the player is expected to know how to infer the moves by heart. 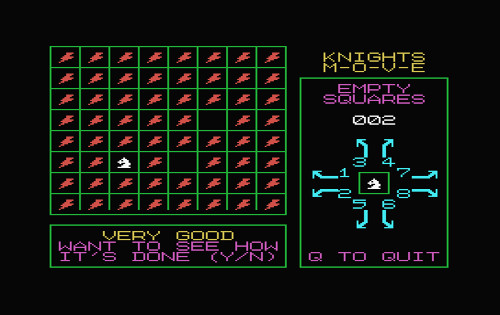 This is actually Knight's Tour. The knight piece is placed in the corner of a chessboard and the player now has to find a tour that takes the knight to each tile exactly once.

Finding Hamiltonian paths in a graph is typically difficult. Knight's tour is an easy special case that can solved quickly... but really, this minigame is just about telling the computer how to move the knight (with no option of undo), and if you fail, the game will show how to solve it... and say "Easy!".

If you do well, you give the game 64 moves and win. Otherwise, you probably try giving about 50-60 moves before seeing you're not going to win. 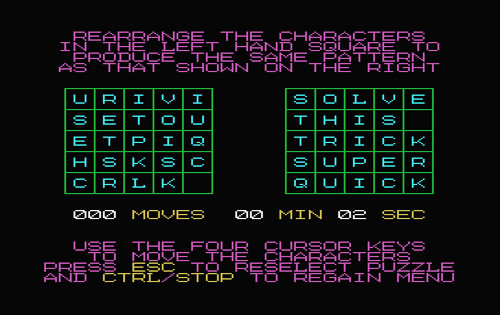 Here we get to actual replayability. Kinda. 15-puzzle is a physical puzzle game from the late nineteenth century: in this case, the table is a 5*5 tile board with spot empty, and the player has to move the empty space to rearrange the other tiles to a desired configuration.

Sounds good enough, right? There's even a possibility to change between easy and hard puzzles -- with the former having fewer different tiles.

On repeat tries, the initial states are identical. While I doubt most people would actually bother to learn the optimal sequence by heart, this really stings in the replayability of the puzzle.

While half of the original rearrangements of the tiles in 15-puzzle are such that the tiles cannot be placed in the desired order, if that applied to this game it would still have been easy to avoid. 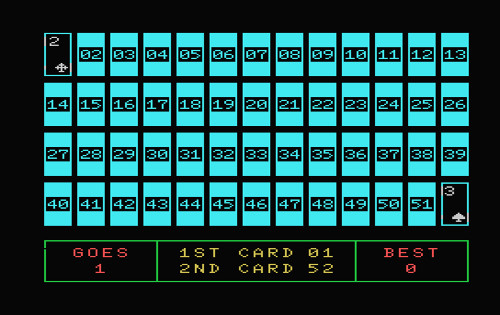 Ooh, a memory game with 26 pairs of cards. And this time, the cards are properly shuffled, even! 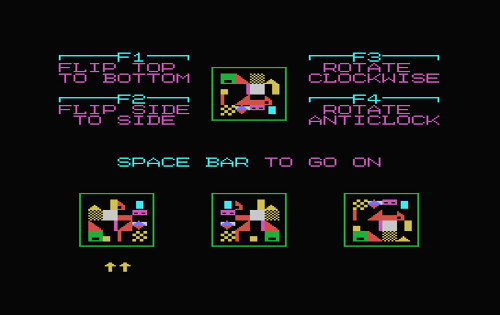 This is more interesting: there's one sample image that looks like beginner's abstract art, and the player has to apply at most two transformations (three on easiest level) to another image so that it matches the original image. These transformations are rotation by 90 degrees or flipping by an axis.

Now that I understand the instructions, I think this isn't a bad minigame. The patterns are randomized, there are three difficulty levels and it's a race against the clock as well. But even so, the scoring is too coarse -- there are only a fixed number of patterns you will match per game, and that number isn't very high. The time limit doesn't affect the scoring either if the player stays within the limit. For high score hunters this game is not. 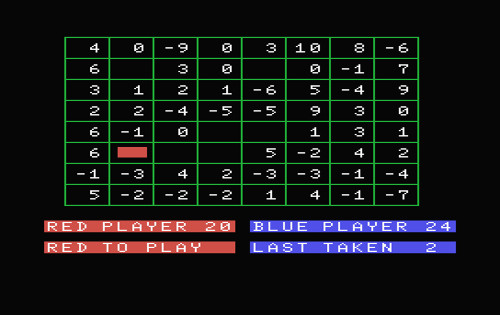 The game ends when the player in turn has no numbers to choose from. 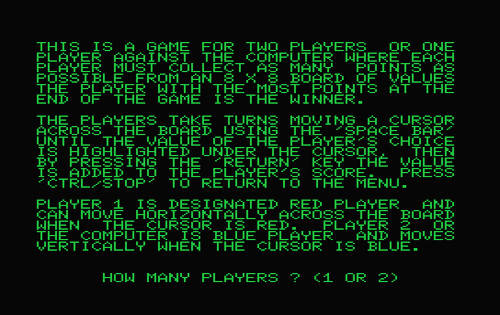 This'll serve also as an example of how the game actually had pretty in-depth instructions that didn't require the manual, printed on a fold-in page of the cassette cover. Plus the text there is far shorter than this.

Can of Worms feels like a budget title, and I imagine that's what it was. Livewire's catalogue on MobyGames contains many unoriginal ideas: Skramble is a Scramble clone, CONGO is a Donkey Kong clone, Invaders is a Space Invaders clone, Jumpin' Jack is a Frogger clone. I don't think the game had any sound at any part and the gameplay value of half of the minigames is questionable. That is what will be a recurring theme: while Reversi (or Othello, as I know it) may today be relegated to freeware titles, even Nintendo Gameboy had a Reversi game.

Take-Out gets the obvious top billing here as the best-refined minigame of the lot. It is the only game that can be played by two players, it's got a proper AI to play against and it's got replay value. With some more bells and whistles, it could've made a nice budget title by itself.

Of particular note is that there was no multiload here. All six games were loaded into memory at once and after that, the C-tape was not used. Just by pressing Ctrl-Stop the game would return to the main menu and let the player choose another game to play.

(EDIT: Removed one possibly false comparison to Cassette 50, corrected the statement of Livewire's lack of original ideas in their catalogue)