Making his triumphant return after a many day furlough, Excremento, the King of the D-Toid Top 10s comes at you this evening with another one of his creations.

Many of you serious gamers have played games where you wonder why certain game developers put some of the worst weapons into the games we play. Tonights list will attempt to list my most hated weapons in video games. I know many of you will disagree with plenty on my list, but thanks to this C-Blog technology you can make your own top 10 and get points for it! Awesome! Here's the top 10!

Man, I loved this game on the Game Boy. It was a much better game than the original Super Mario Brothers on the NES, just without the graphics. This powerup in the game though is made of fail until you get to the stages where you aren't in the open. You pick up the fireflower and you can then shoot a fireball at at 45 degree angle and watch it bounce off the ground and into the air...where it just goes off screen. True this weapon did help with many of the flying baddies and when you needed help getting all of those shiny coins, but beyond that your fireball should bounce along the ground damnit!

Probably the most redundant gun I've ever seen put into a FPS, ever. The chemical thrower allows you to use three different "chemicals" that mimick the plasmids that you should have equipped anyway. Sure, it might be of some help to those who didn't equip your 3 elemental plasmids, but for me...I never used this weapon at all. The reload time is atrocious as well! I have nothing good to say about this weapon.

When dual wielding was introduced in Halo 2 I was giddy with excitement. Now that the honeymoon is over, I want a divorce...I was sad to see that the Assault Rifle was gone in Halo 2 but glad to see it back in Halo 3. It was replaced by the SMG in Halo 2, not a bad gun really, but good god man, when dual wielding the SMGs in multiplayer, you're better off using uncharged plasma pistols. You have to seriously unload a full clip from each in order to lay someone out properly. Hence, why it's here on my list.

Charged up, this is a good gun. Uncharged, this gun is teh suck. The grenades roll out of the gun and roll lazily along the ground until a-sploding against what target you might be aiming at. I want my grenade launcher to be like the Flak Cannon from Unreal Tournament. The worst part is that this Contra game didn't even have a Spread Gun! Blasphemy! Though this is probably one of my favorite PS2 games, everything else is great except for the normal fire for this weapon.

As much time I spent playing Secret of Mana, I hated leveling this weapon up. Even the charging attacks are ineffective. The whip was a better weapon! I don't know what the people who designed this game were thinking but the collision detection for this weapon is just god-awful. Ugh, as much as it pains me to put anything from this game on a list of things that I hate, the Javelin must go!

I can recall going through the game single player back in the day, and remembering all of the 8 year old cuss words I would use when I would happen across the "F" powerup. To me "F" = FUCK! and that is what this weapon will do to you in the game. You shoot a itty-bitty ball of fire that rolls in clockwise circles towards your target. Though if you time the shot wrong, you miss...wow great gun huh?

After beating the game on Professional difficulty, you unlock this piece of crap gun. I can't tell you much about it because I hated it from the moment that I obtained it in RE:4. I think that the SMG worked much better than this gun. Hated hated hated this weapon.

As if most the weapons in Doom weren't nerfed enough. The "1" weapon before you pick up the chainsaw is a really in-effectual punch. You're hand is banded and has some spikes on it, and if you hit some characters, it turns them into hamburger. Lame. Just lame.

You can not come up with a worse gun in real life or video game. I feel like it is the equivolent of a back massager thats running low on battery power. I don't even know why I'm so compelled but I need people to hear that I fucking hate this gun.

It was the worst accuracy ever, it is weak, and it takes money from St. Jude's hospital every time you take a shot! If the Klobb were a Jell-o it would be the flavor and color of WATER. I would rather use the Nerf Crossbow than a Klobb to take down my enemies.

ARGH - Goldeneye is CEREAL business and I don't have time for you - KLOBB! I'm going to go take a fork to my copy of Goldeneye in the hopes that I may damage the data on the cartridge that holds ALL information about the Klobb and it will just be void from my life."

Poor Raphael. Thanks to his puny lil' weapons he carries and twirl around in this game, he is reduced to electrified seaweed bait. Every character in TMNT has decent reach except for Raph, its like they were handing out beef jerky to everyone in line for the game and Raph ended up with a dog treat. I always liked Raphael's attitude more than any of the other turtles, but man he got Nerfed bad in this game.

If anything can be learned from this list is that, not every weapon needs to be a) totally realistic, b) made, and c) so hard to obtain. I hope that all you out there in D-Toid land enjoyed this list. I'll return tomorrow night with a list of the Top 10 Vehicles in video games. Thanks for reading!

Are you still here?!? 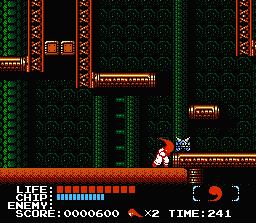 C'mon, the story is simple. In order to fight a computer infection, you, Colonel Scott O'Connor *cough* generic name *cough*, enter the system (the Main Defense Computer) by transferring his brain into raw binary code. Its totally believable right? Um no, whats even more unbelievable is that his body forms the self-image of his ancestors which were Kabuki actors...no lie. Anyways, you use your hair as your main weapon as well as other "chip" based attacks. The game finished and had a message to watch for him in his next game, which never came to be. It's too bad really, it was a decent enough game...but come on his main attack was HAIR!!!
#Community
Login to vote this up!