You not cooking: making chicken soup

What do you do with a chicken carcass?  A question asked since time immemorial.  Turns out, you make some bomb ass soup.  Full disclosure, this is a drunk blog after a shit week, so buckle up, homestuck.

So last time, I made a chicken, and ye - it was good.  So the next step was to take the cold remains, and make something out of that.  I took the previously discarded spine, and the remnants of the pieces I had eaten, and throw that all into a big ol pot with some nuetral flavored oil.  Why nuetral flavored?  I honestly have no goddamn idea, thats just what they said to do.  But I know that if you want a darker colored stock, you get color on the chicken parts as well as all the veg. This imparts flavor and color. 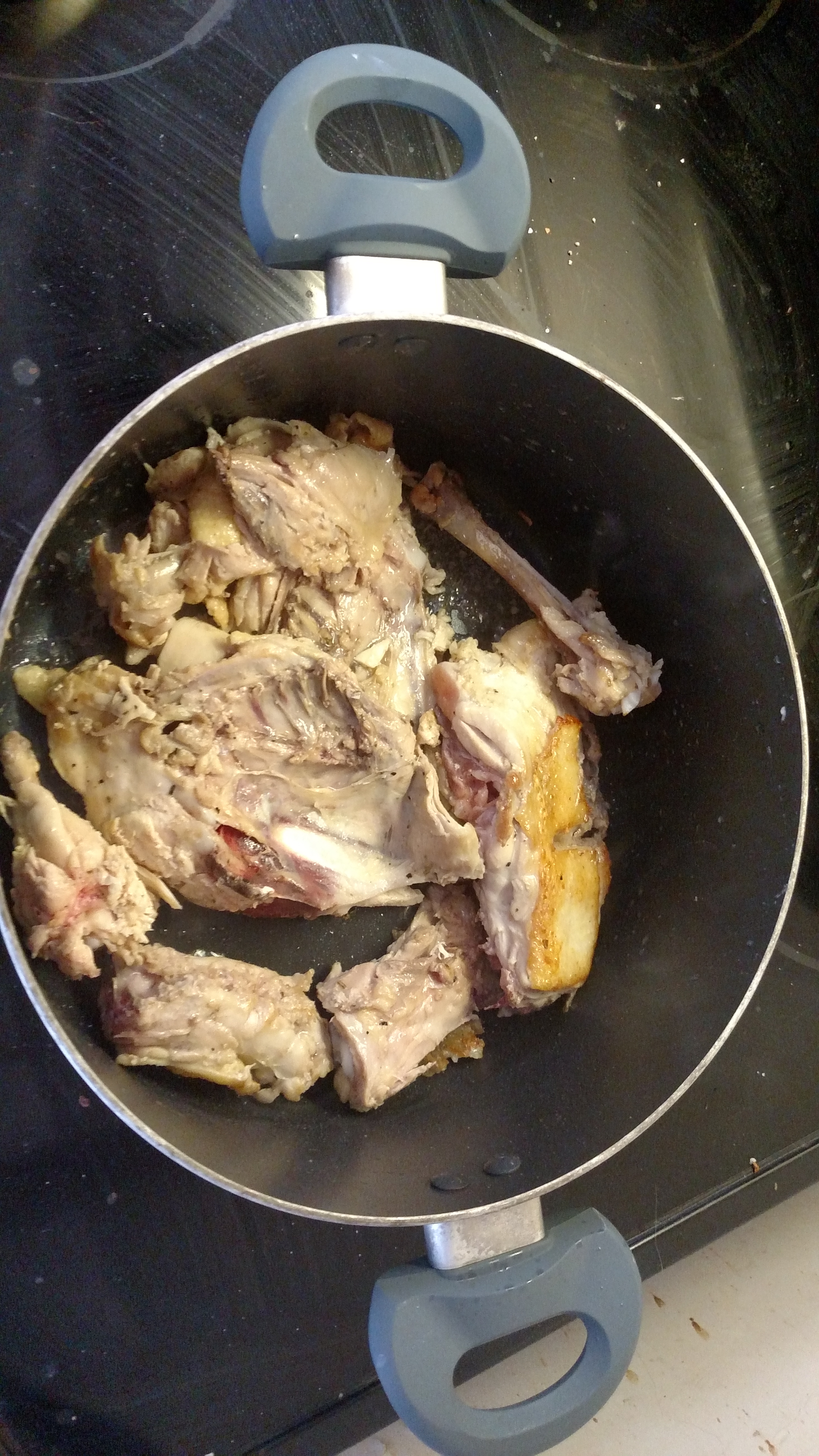 The next step was to add some aromatics to the fold.  Honestly, I don't know why you add aromatics to soups, but I assume they just taste good.  So I added a mirepoix, except it wasn’t all cut up, and it wasn’t all french.  But basically, I wound up browning a quartered onion in the chicken fat that rendered from the carcass before adding in the rest of the veg - celery, carrots, and garlic.  Usually you discard the fronds from the celery (I fucking love all the words in this - fronds, mirepoix, spatchcock, mukluk), but in this case, you keep them in there because the chefs say “keep them in there moron”.  Topping all of this with water gives you the base of your broth, to which you add all your spices...but NONE of your salt.  Apparently you salt last, asd anything else is a cardinal sin.  My spices of choice were sage, rosemary, and black pepper (with some dill later). 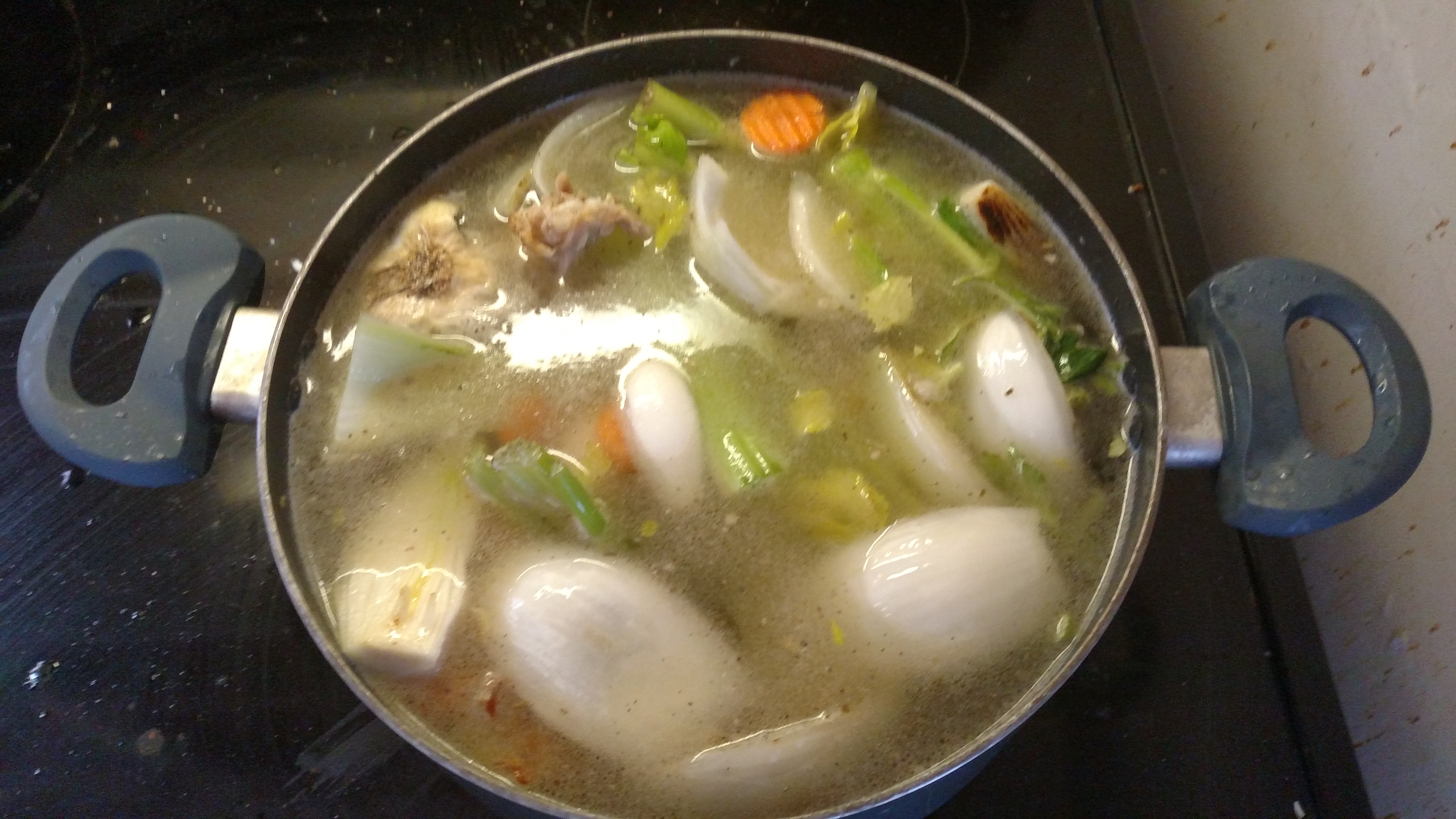 So you turn that up until you get a boil, and leave it at a simmer, then you wind up getting scum.  And yo, water buffalo man, etymology fact:  scumbag used to mean condom.  I love that, because its a male douchbag, basically verbatem.  Anyway, as scum rises to the surface, you skim it off if you want to keep your broth clear.  My broth was so murky you couldn’t see half an inch into it, but I did skim the scum anyway for funsies.

After a few hours, the bones became spoon tender - I was able to break the spine up into a few more pieces, and some of the bones in half.  Now I am a little bit grossed out by this, but I can’t tell you why, but the flavor is apparently from the marrow and cartiledge.  I’ve never had just marrow before, and I hear its great, but my lizard brain just doesn’t handle it.  Its kind of like liversausage - I love that shit if I don’t think about where it comes from.

Anyway, after a few hours, everything had imparted literally all it had to give, and was ready to be strained out.  It feels wrong to discard so much meat and veg to the process, but hey, stock is stock, and these gave up all their love. 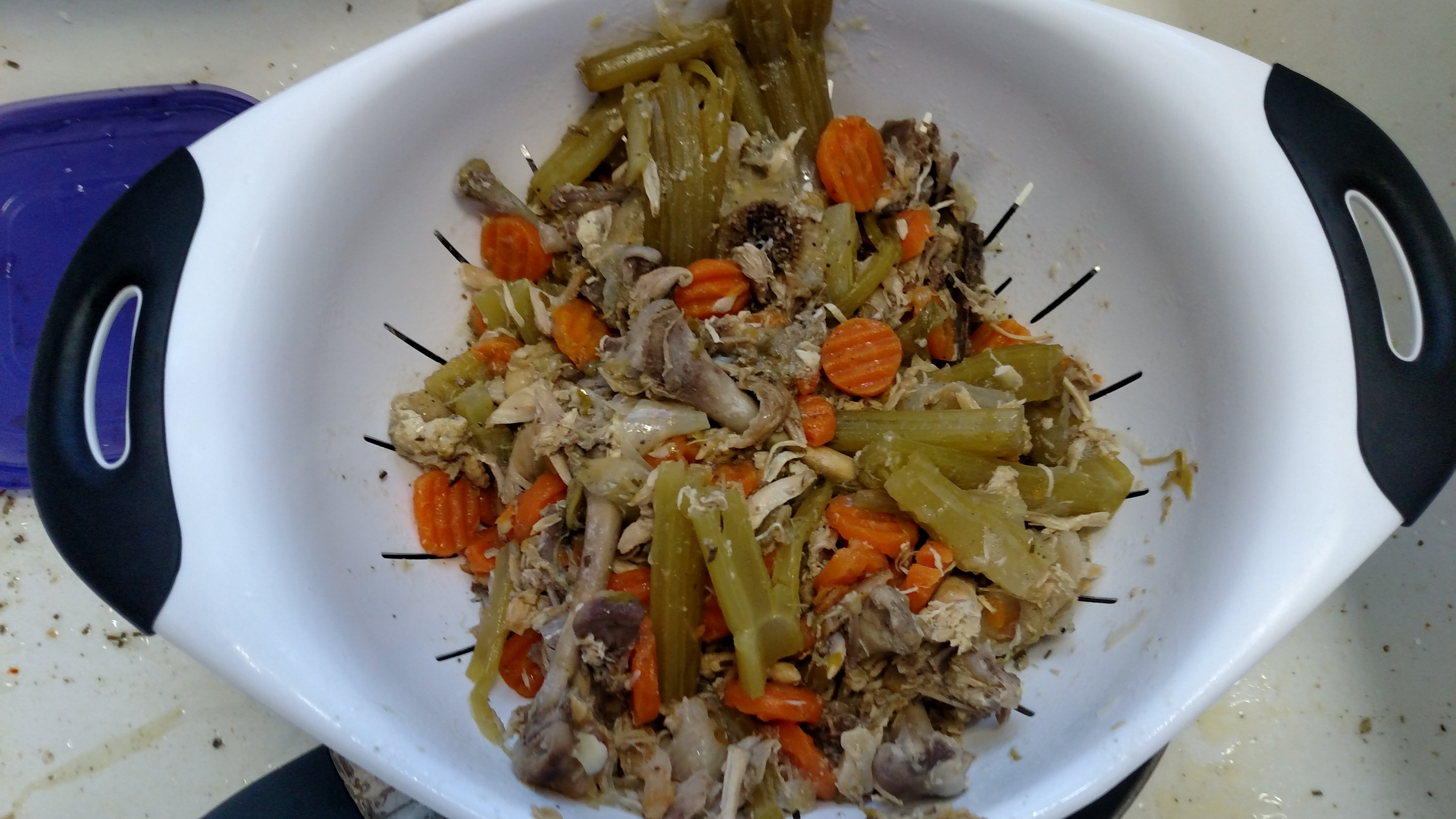 So now I had just some simple stock (a lot less than what it looks like - aromatics and carcass took up a lot of space), to which I added some carrots, some celery, and the rest of my chicken, sans skins to get the base of a chicken stew.  At this point, I finally added salt, as well as another pinch of all the spices I had previously added along with a small heap of dill.  The salt really makes it all come together.  At this point, the stock is also super concentrated, mostly because I don't have a good stock pot, just some dutch oven style pots.  Going from my bff Babish, I added in the noodles last, and cooked up a portion. 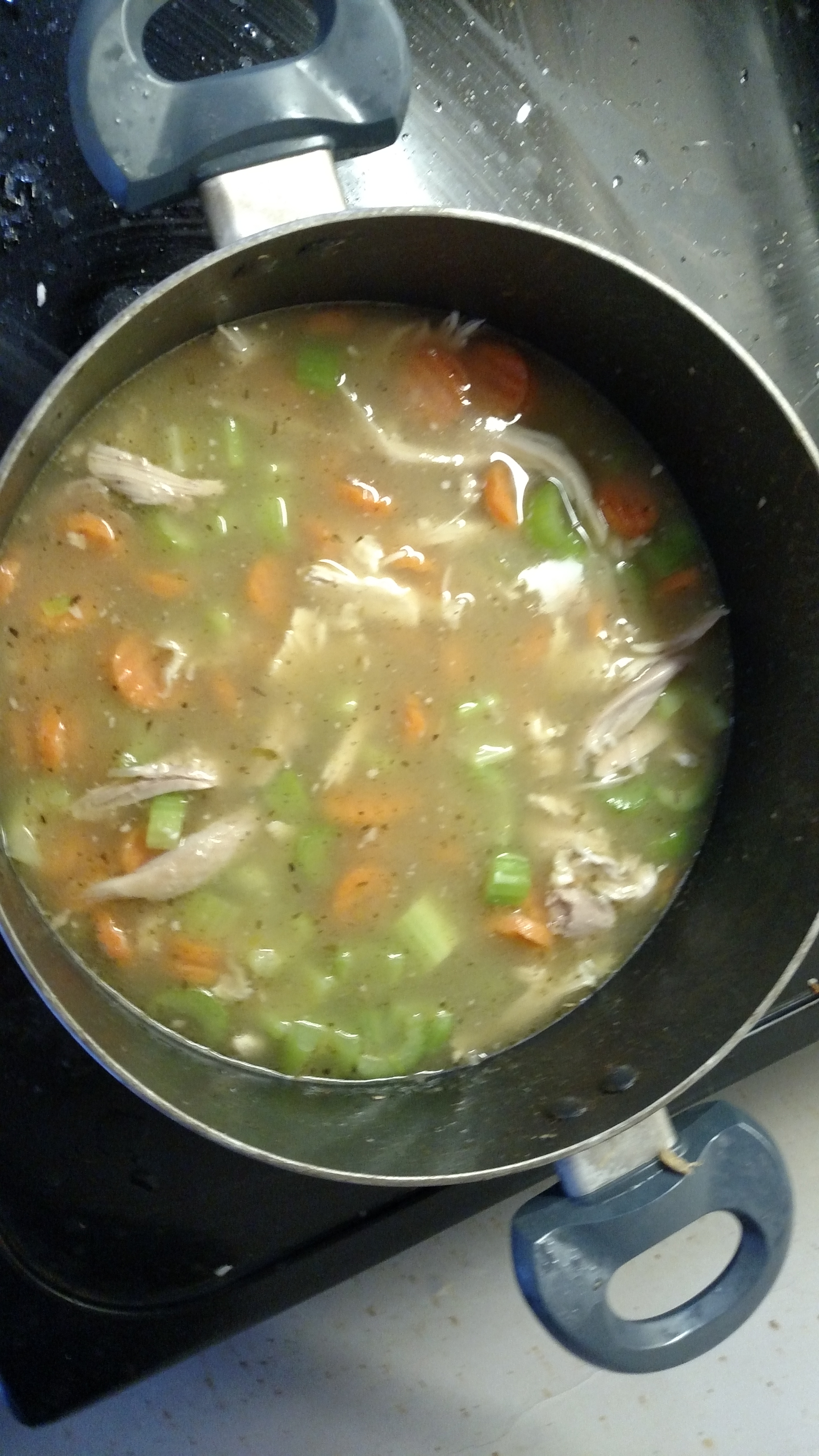 I have to say:  really, really good.  He makes it sound like you are going to jizz in your pants after eating it, and maybe I would if I had fresh ginger on hand, but honestly, this was a really, really good chicken soup.  I love the amount of creativity you can have with it, and I also really enjoyed seeing something come together out of the scraps and remnants of another great meal.  Necessity is the mother of invention, and when it comes to food, this is usually the best of the bunch.  Peasant foods and leftover foods have such amazing qualities about them that you would be totally remiss to not indulge every once in a while. 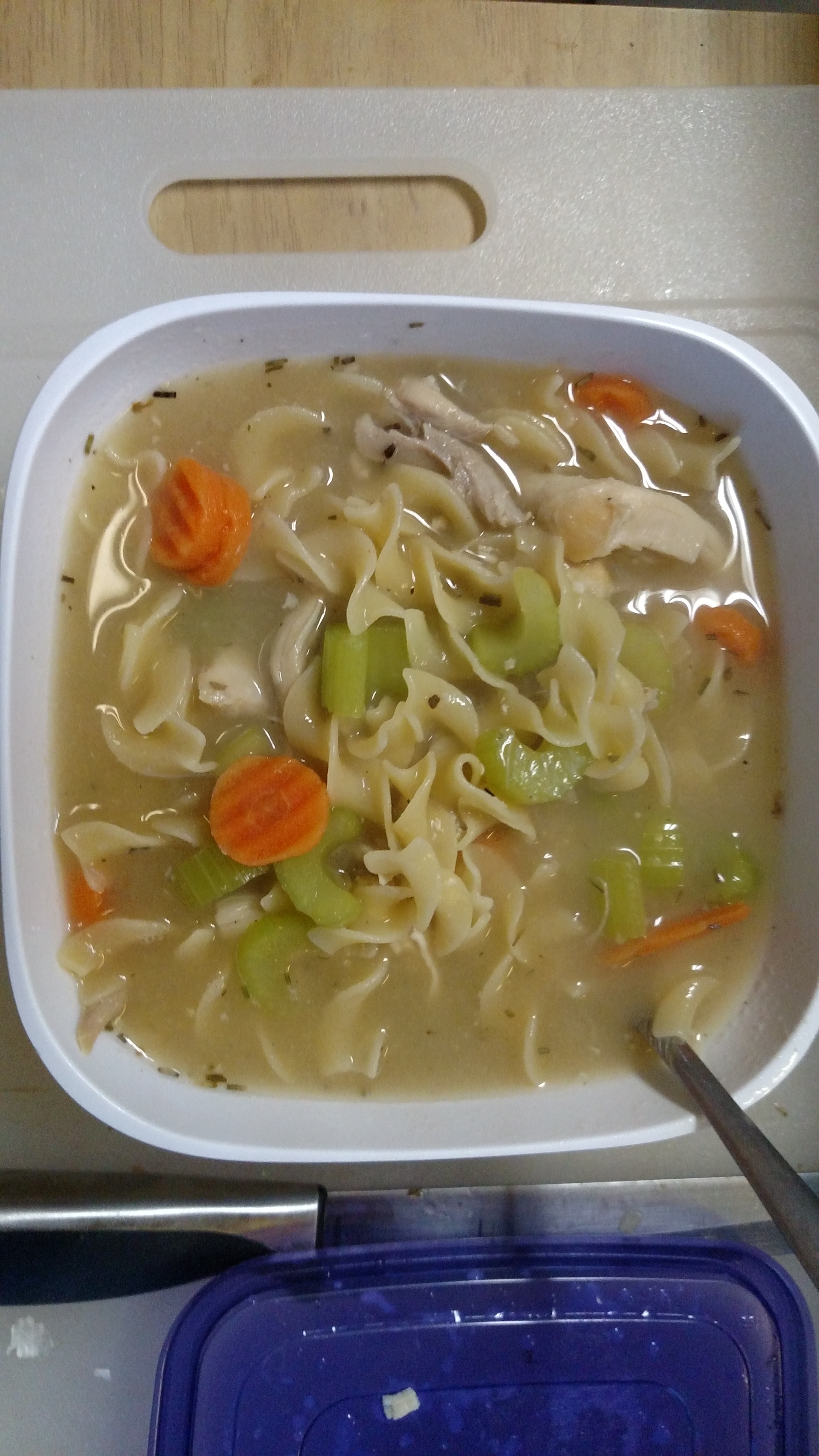