Cooking blog: At least I have chicken

I don’t really know why, but I have been bit by the culinary bug lately.  I always have had some kind of interest in it - there is something soothing about the ‘ritual’ of a recipe.  I don't know if its the mysticism of blindly following a recipe to see the ingredients transformed, or the learning experience of classic techniques, or even just doing something creative.  Something about it just tickles my fancy.  Lately, the biggest inspiration has been Binging With Babish, a youtube series that is focused on foods from shows and movies.  I made the chili from the show, and it was amazing - completely different from my expectations of chili (mostly thinking that chili didn’t in fact use chilis, except maybe powder as a spice.)  So that brought me to making a chicken.

The process used is called ‘spatchcocking’ which is super fun to say, but boils down to butterflying a whole chicken. This involved removing the spine. Artists depiction below.

This let me buy some culinary shears which I was way too excited to buy.  Real talk here?  I’m 4 months shy of 30, and the things that get me excited to purchase have changed wildly.   And it will happen to you!  Anyway,  after you cut around the spine, you can make a snip on the wishbone area to make it lay flat, leaving you with a chicken that you can splay out skin side up, meat side down evenly on a baking sheet. 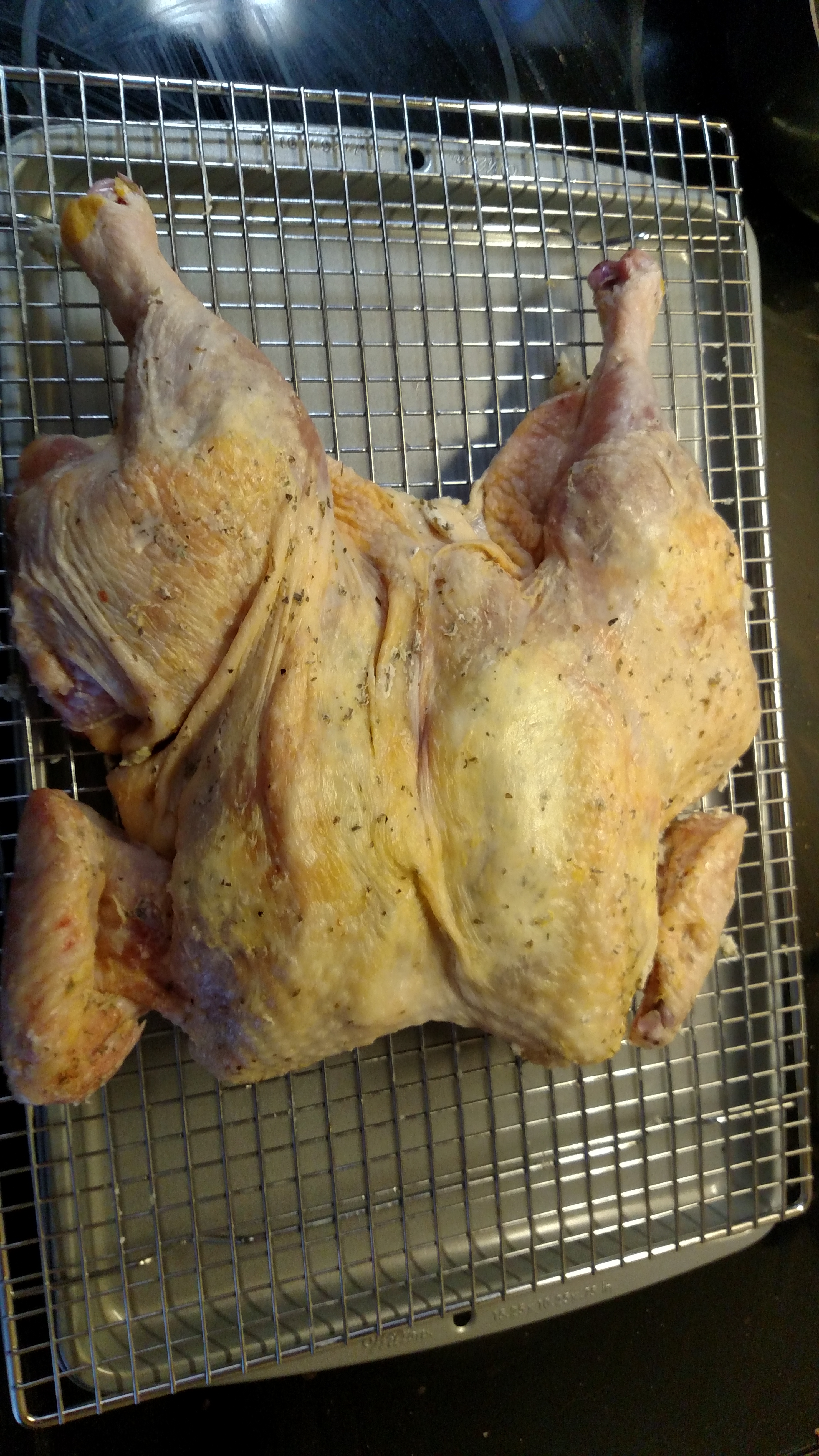 The picture above isn’t exactly what it was, because I wasn’t planning on making this blog at this point yet, but I figured it was a good enough illustration.  The first step after removing the backbone was to cover the whole thing in a shit load of salt.  The purpose of this is to remove as much moisture from the skin as possible, as well as to season it.  Spoilers?  This is a game changer. 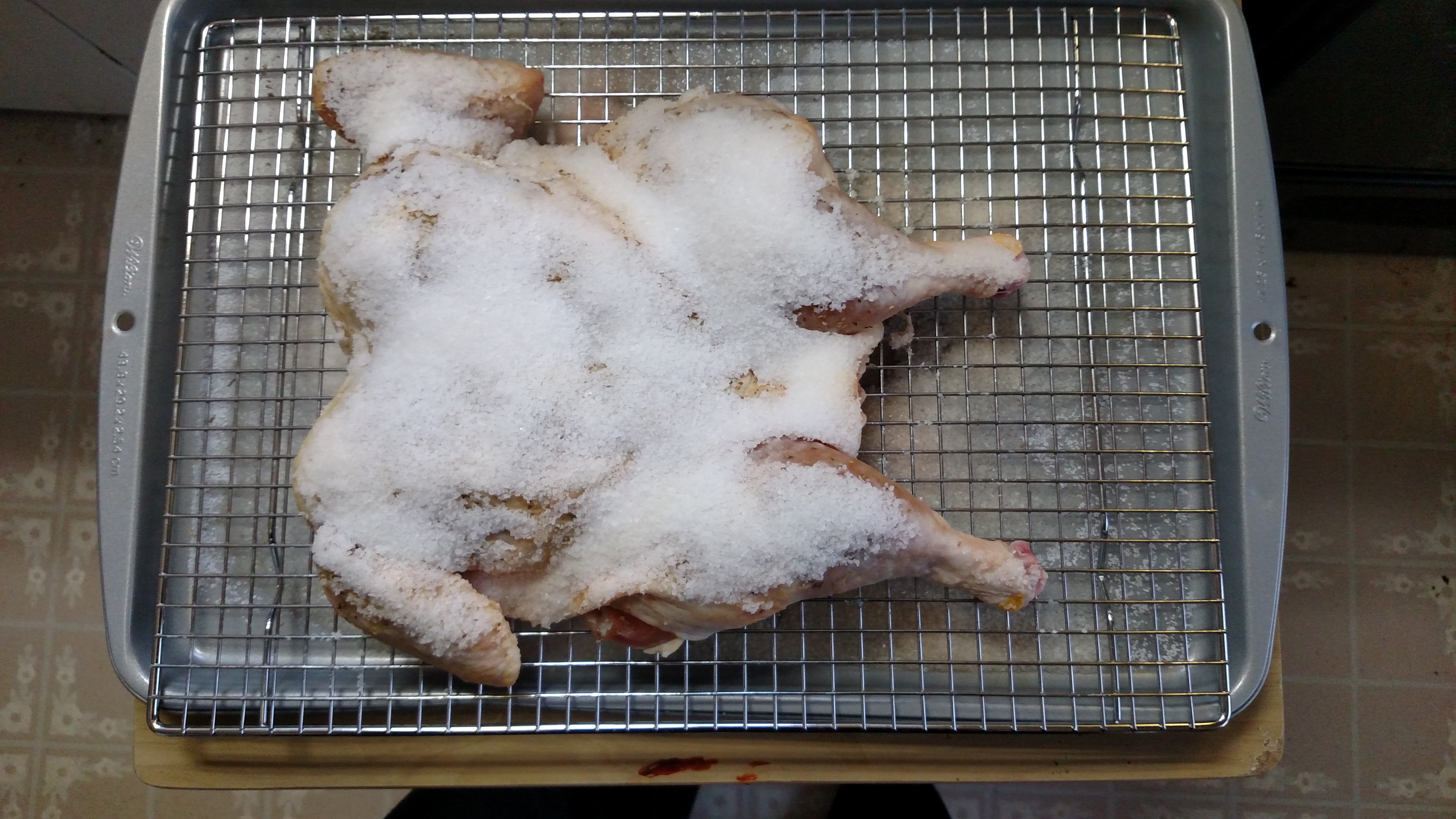 Note:  this isn't the pciture of your last overwatch post game.  That was more salty

After 24 hours of having a spineless chicken in my fridge (the ultimate coward), I was able to rinse the salt off and crank up the oven while I prepared to finger this bird.  The recipe called for cramming some herb butter underneath all the skin, so I did my best impression of a doctor with a rudimentary knowledge of where the prostate is, and went to work.  I have never been so intimate with a chicken in my life.  I used butter, rosemary, sage, and something called ‘fox point’ seasoning, because it was in my cabinet dammit.  Also, life pro tip:  buy culinary gloves.  Failing that, if you wind up covered in butter or oil, wash with dish soap and then hand soap.  Dish soap got the butter out of my fingers, and then the hand soap got the salmonella off...I hope.

It went at 450 degrees, per the video, with the timer at 40 minutes.  Every bit of that sounded really, really wrong to me from a sense check.  This is why I’m not a chef.   Most of the time, I think of chicken as being like 350 or so, and I was guessing at the 40 minute mark, even at that temp, it was going to be way undercooked, and that the fat was going to smoking my house.  Turns out?  It was perfect.So here’s the thing:  the skin offered the kind of brittle resistance against my thermometer of a piece of paper.  It just crunched and punched through, and it even came out a little bit above temp (~200 on the thermometer, which had me worried it would be dry.  Shows what I know).  I let it rest for 5 minutes while I convinced my smoke detector that my cooking wasn’t an emergency.  It was simple enough to split the bird into half with a large knife going right down the middle.  I suck at butchering into the bucket pieces, and honestly, even if I didn’t, I wouldn’t have anyway.  This was good enough to eat on a stick like some kind of goddamn animal. 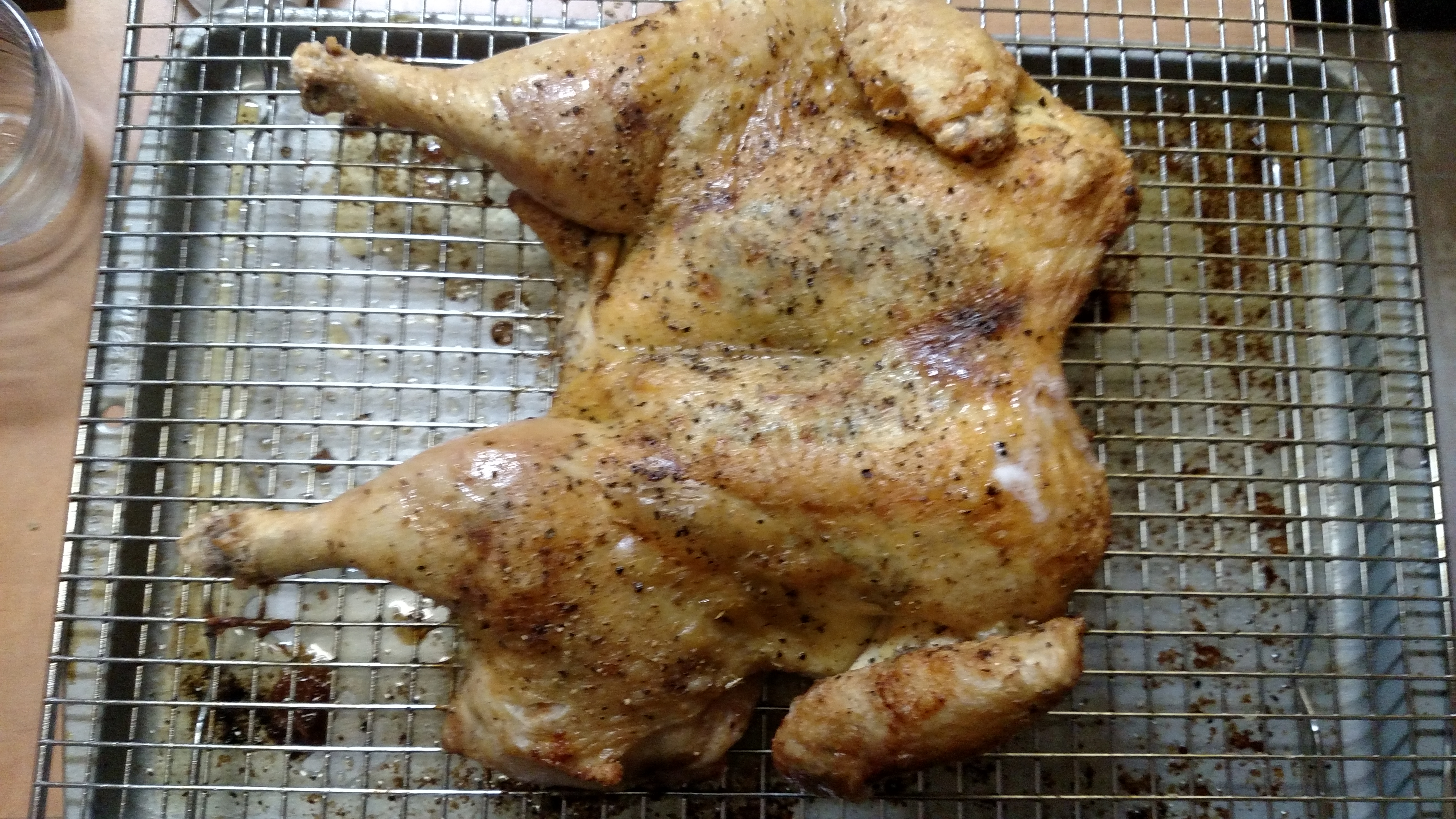 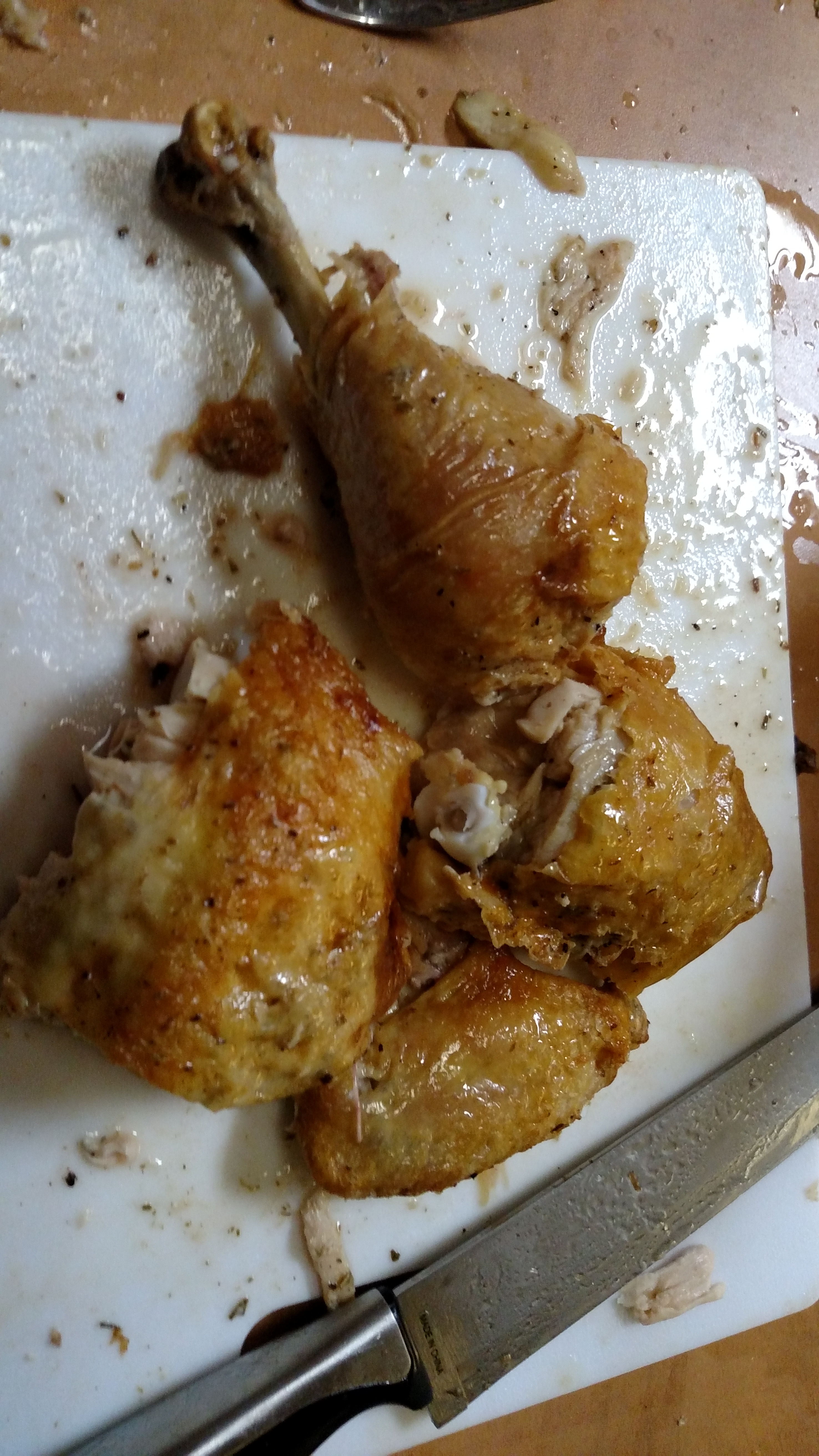 Here’s the rubdown:  The skin was perfectly crispy.  It was almost a bit too salty - kind of reminiscent of the first time that I seasoned pasta properly.  It definitely compensates for the large portions of breast meat who didn’t get any salt on them during the process.  Just that herb butter which, holy crap, was amazing.  Every bite of meat had such a kick of savory flavor throughout.  I wound up eating it all just by picking at it with my hands, and sucking down my fingers well and good afterwards.  I am planning on using the carcass, the dark meats and the spine in soup this weekend, which will also be an adventure.  I imagine I will get around 5 meals (2 chicken, 3 soup) out of the 10 dollar whole chicken, and maybe another 10 in aromatics.  Not a bad deal. 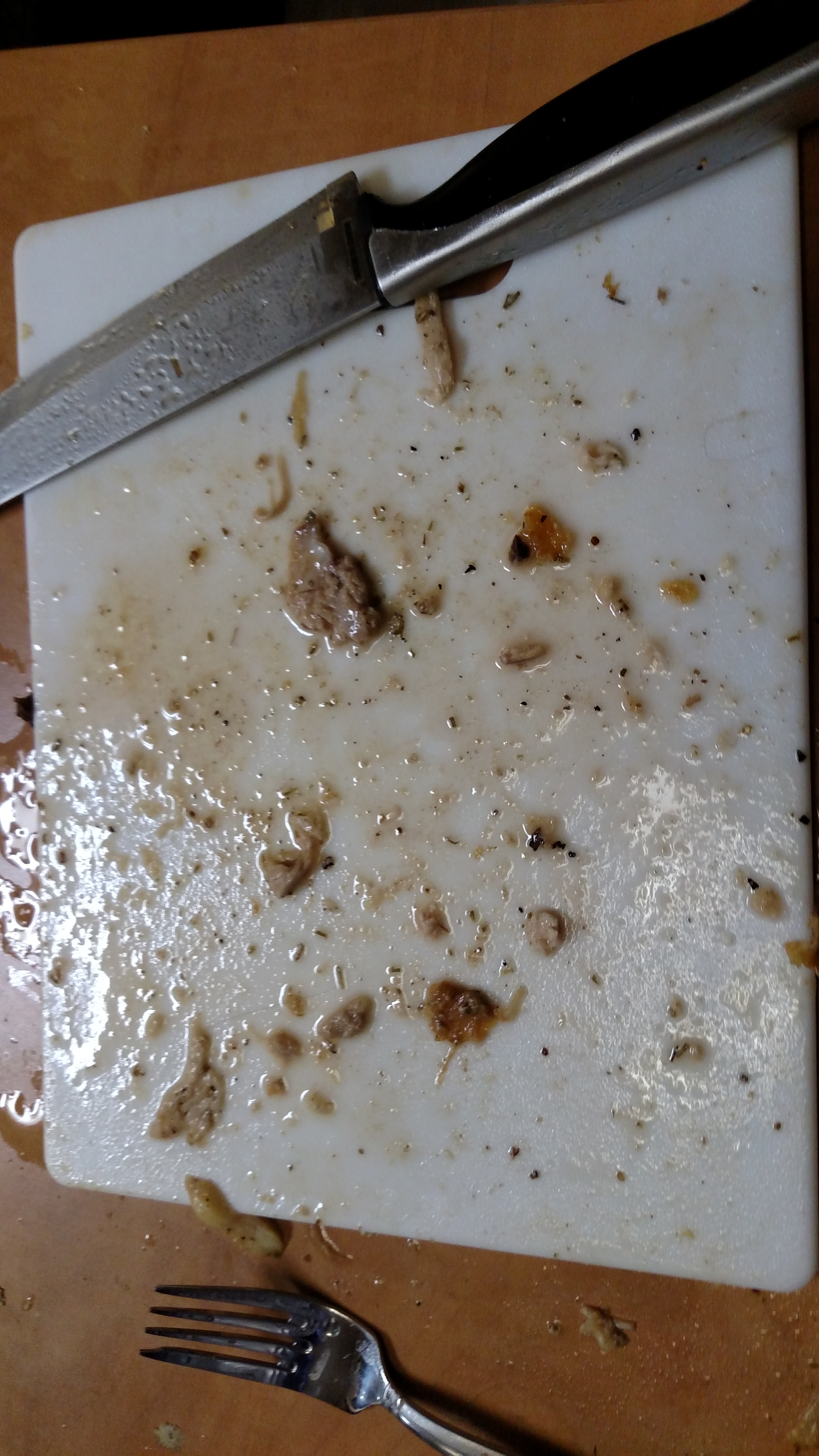