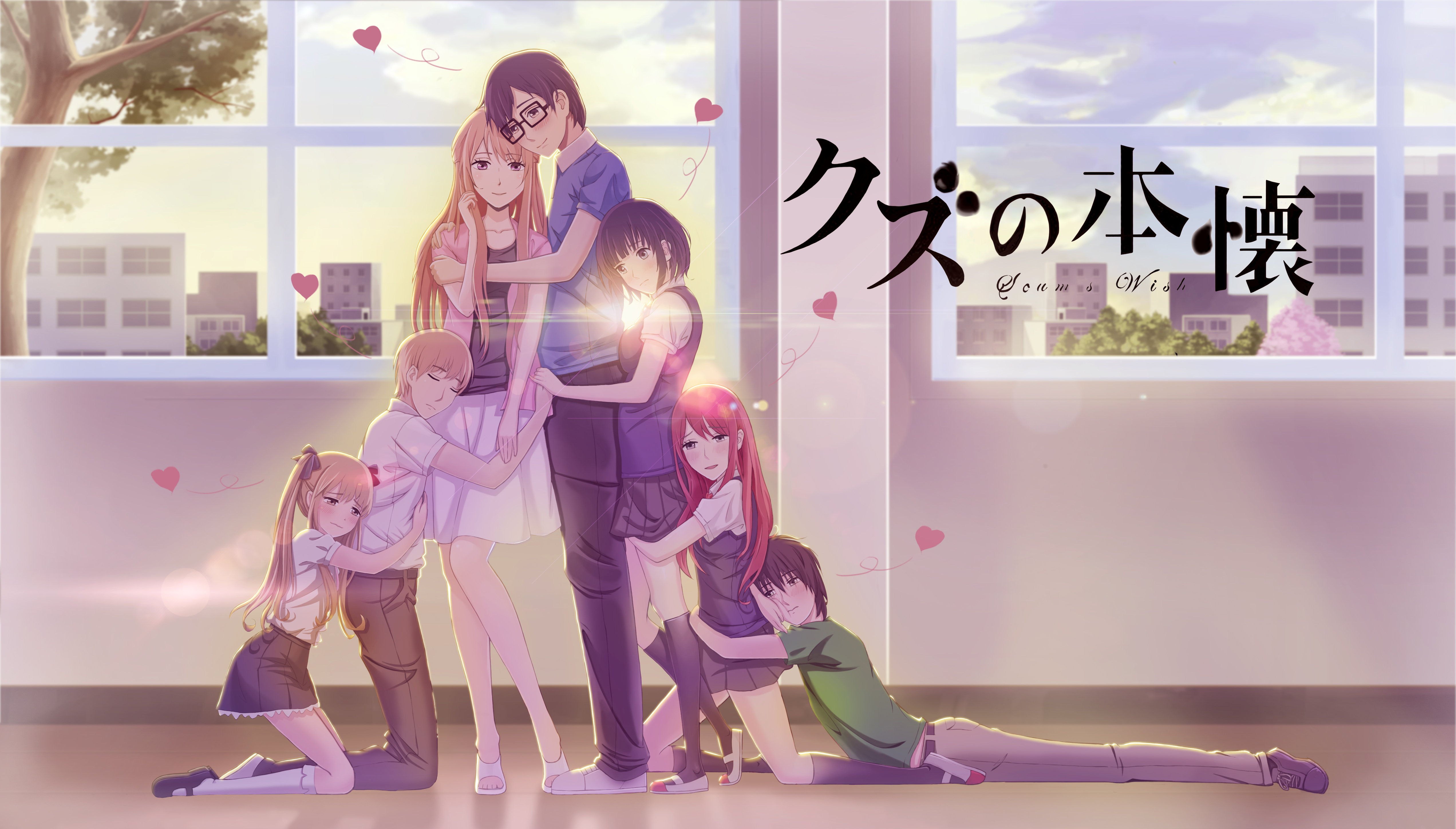 I turn 29 today, and I realize that it has now been over a decade since I graduated from the hormonal wasteland known as high school. Young romance can be downright tragic, messy, awkward, uncomfortable, and just flat out confusing as hell. It's difficult to reflect on those awkward emotions, especially since most of us would rather just look away and pretend that they never happened. Scum's Wish, however, embraces it full on. The Titanic isn't even trying to steer away from the iceberg here, it's looking to hit it head on.

First and foremost, this show is going to overwhelm you with it's heptagon shaped love affairs. It starts off simple enough; two high school students (a boy and a girl) fall in love with their respective teachers, only to fall back into a state of sadness for fear of rejection. The two angsty, lonely teenagers decide to take comfort in each other...even though they don't have feelings for each other, and that's where things start getting messy. Oh, did I mention that there's another girl who happens to be in love with the girl main character, and that said girl has a cousin who's in love with her? You still with me here???

These characters all bring a different flavor and direction to the story, so if you're worried that your personal perspective wasn't covered in this love story, it's got your back. There's the girl who's in love, yet knows that the man she's in love with is infatuated with another woman. Said woman really isn't in love with the man...but likes attention and gets her satisfaction by stirring up drama and inflicting pain on other women that she feels are inferior to her. Then there's the boy who is in love with the evil, vindictive woman but knows that she's only out to hurt others, all the while he has another girl who's infatuated with him (but he never notices her), and thus he seeks out comfort of closeness with others, even though he has no real emotional attachment to them. I mean it's a long and twisted sexual fuckery that will do everything it can to make you hate being a teenager all over again.

And therein lies the beauty of this show. It's not the ridiculous, cringeworthy scenarios that pull you in...it's the sad yet inconvenient truth that this is how many kids function during those early years of their lives (some adults, too). Looking beyond the fact that teenagers are in love with adults, and adults (teachers even) are hooking up with random students just for affection is kind of a messed up twist in itself, there's valid reasoning behind it all; human beings don't want to be alone. It's romantic. It's disgusting. It's real.

Malika and I talked back and forth a lot during this show. One thing that bothered me, was the sheer ignorance of...well, almost all of these characters. One thing she pointed out, is that in literally every intimate scene in this show, the female characters are crying. It's disturbing! Almost every intimate scene in this show will leave you asking "why???" and cringing. Scum's Wish isn't afraid to make you uncomfortable, and yet somehow, you want to see how this giant whirlwind of sex, frustration, heartache and pain all works out.

Pacing is definitely messy. There are only 12 episodes, and the drama strings you along very loosely until about the 9th episode, in which everything starts to fall into place and click together coherently. Imagine having a week long project, in which the first 5 days you barely get anything done - maybe you glue a couple things together, eat a sandwich, sleep with someone of the same sex just because you value their friendship, etc. THEN, 2 days left, you pretty much put together a mountain of work and piece together the perfect project. Personally, I felt that development of characters and arcs could have been managed better, but I digress. This certainly isn't the first anime I've ever watched that rushed together the ending (maybe directors don't realize how close they are to reaching their series end when they get so far along into development).

There's really nothing to write home about here. Scum's Wish feels very vanilla in terms of it's animation style and art direction. While I prefer this to the generally blocky style that I saw in Made in Abyss, it's very par for the course in terms of what you would expect from an anime. Though the show aired last year, it doesn't feel like a very fresh style that will make it stand out. Not a bad thing at all, just nothing that will make the series memorable. Sometimes playing it safe is the best way to go.

The soundtrack isn't exactly a redeeming factor for this show, either. It does a good job of fitting the mood of the overall story, but that's not exactly enticing. I did find the ending theme to be fairly memorable, but it is somewhat sad and melancholy.

All in all, I'm glad that I took the time to experience this show. There's a lot of harsh reality moments, and there's some great personal growth and character development. That being said, the over-the-top romantic encounters, overwhelming relationship interests, and somewhat belated pacing keeps this show from truly standing out to me as a timeless classic. Great for a one and done, Scum's Wish definitely has a lot of 'ah, I remember the first time I fell in love' going for it, and if you are into that sort of thing, then you should give it a look.