Anime review: Made in Abyss 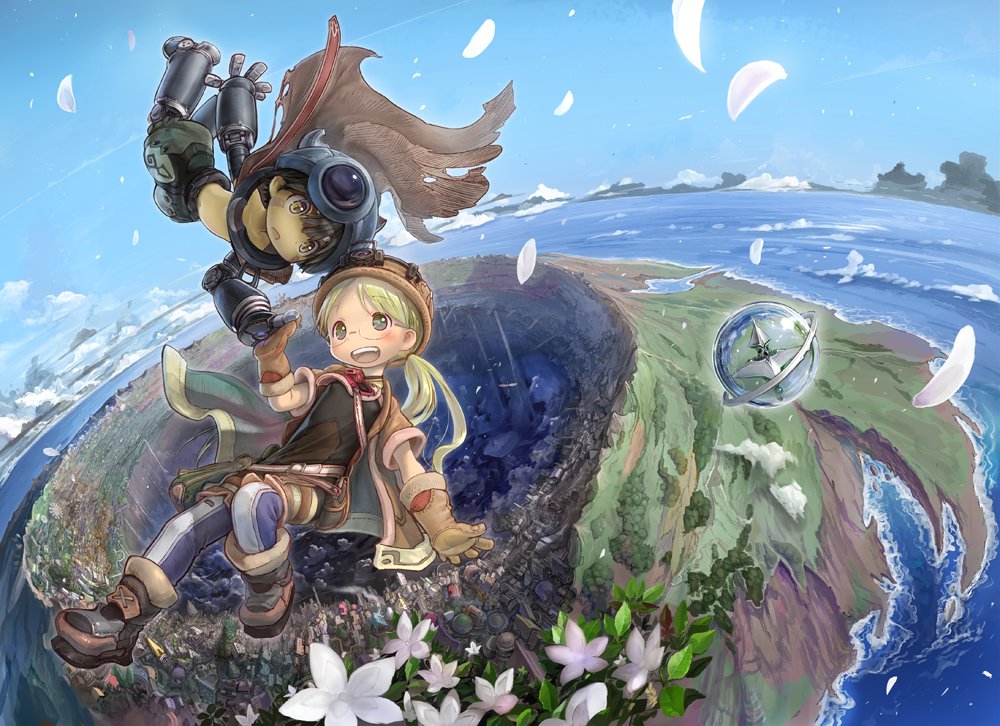 I figured that with it being a new year, it was time to try some different writing scenarios. I've certainly done my fair share of reviewing when it comes to video games over the years, but we don't often see an awful lot of anime reviews here in the c-blogs...so, why not try something a little different! My wife and I have decided to dive into some of the newer up-and-coming anime that have aired recently, and our first big adventure was Made in Abyss. While the show has it's flaws and quirks, it definitely made an impression on me. I figured why not share a few thoughts on it, and let you see if you'd be into it yourself. This is a very minimal spoiler review, so feel free to read on in confidence.

Made in Abyss first aired in July and ran through September of last year, and has earned a lot of praise as being one of the finer anime series released last year. It's only 13 episodes long, so it's a fairly easy series to binge through. Currently, there is a second season airing, so for all intensive purposes, this review will focus mainly on the first season.

I must admit, if I were one to judge a book by it's cover, I would not have been a big fan of this show - that is, that's how I felt at first. It is evident that the character animations in this series have a somewhat blocky and awkward style, and that took me a little while to get used too. That being said, MiA is also very colorful, and environments are well detailed. I actually found myself being absorbed into the various forests, caves, and other atmospheres throughout the show, moreso than I usually do when watching anime. After a while, I started to feel a certain sense of 'charm' in the character animations, and the more characters I met, the more I truly enjoyed the variations in each new character and how their styles represented their personas.

The story revolves around an eccentric girl named Riko, and her role as an orphan 'Cave Raider' in a city that dwells on the outskirts of a mysterious hole in the planet that is simply referrred to as 'the abyss'. Riko is a very lighthearted girl, and her friends are always weary of her spontaneous and bombastic personality. 'Cave Raiders' tend to be central figures in this story, and they rank up in hierarchy based on the color of their whistles (white whistles being elite, legendary figures). The greater the discoveries these individuals make, and the deeper into the layered abyss they they descend, the higher of a rank they earn, and the more prestigious their roles become. Think Spelunky with an element of class ranking. Once Riko encounters a robot relic (whom she names Reg), the story begins to develop and unfold.

While things definitely get interesting throughout Riko and Reg's adventure, the story does develop rather slowly. It really took a few episodes for MiA to really draw in my attention, but once it does, it will leave you wanting more. As the story unfolds and the two heroes dive deeper into the abyss, the adventures will always keep you on your toes, and it's genuinely fascinating to see how the two characters grow and learn from their encounters in the Abyss. I felt somewhat nostalgic, in the sense that I was reminded of the game Cave Story, only on a much grander, more mysterious scale (which is truly saying something, considering the amount of surprising depth there is to that game). 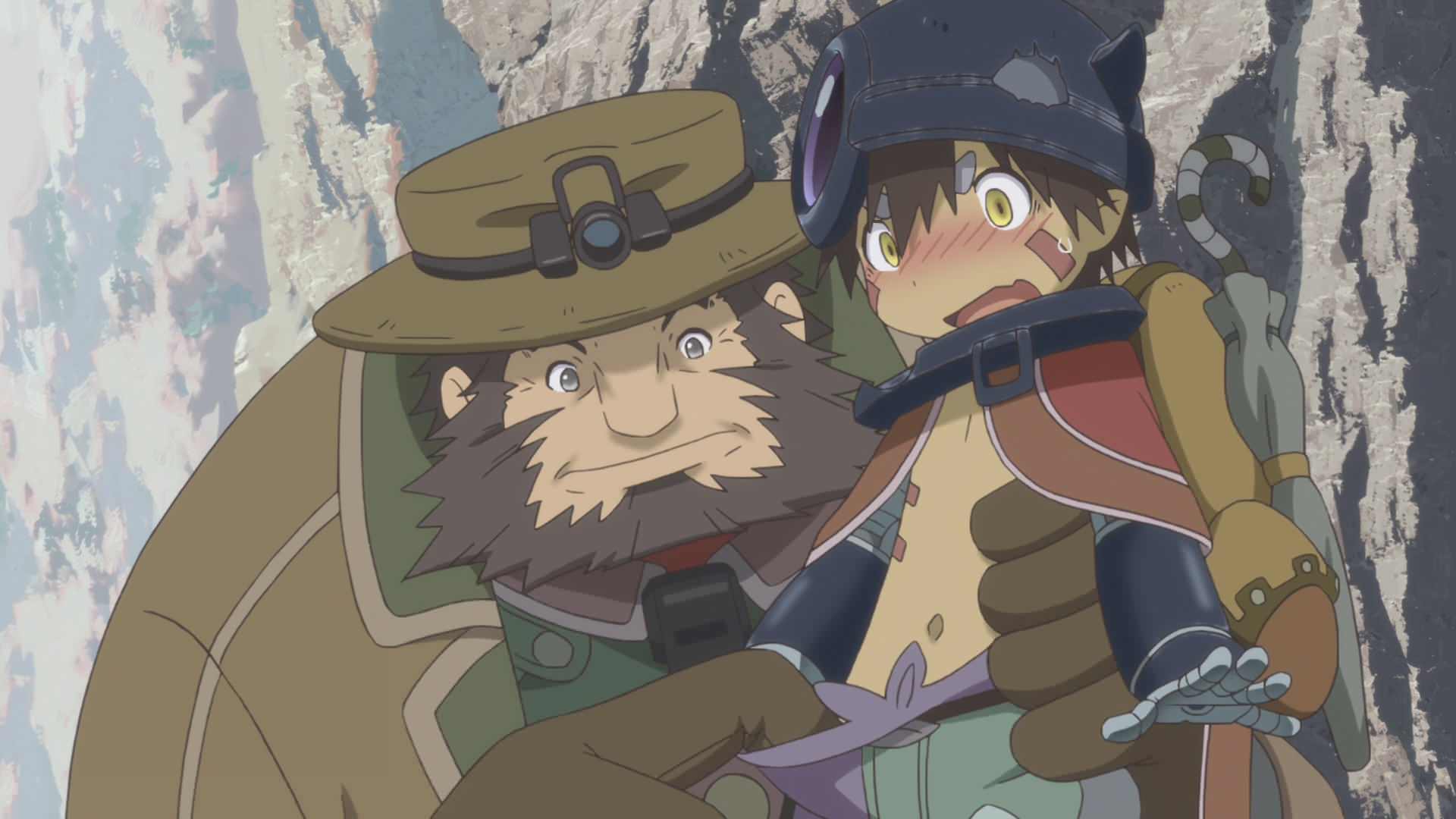 Whatcha got there, little guy??

While the story does revolve around 2 very young characters (Riko being 12, Reg being.............), there is surprisingly a lot of humorous scenarios - though nothing too inappropriate. Sure, there is the occasional awkward scene and penis pun, but really this is not a fan-servicey show (as you might have assumed from the animation style alone). That being said, not all characters are light hearted and happy-go-lucky...quite the opposite, really. You'd be surprised at how intense this show can be, and at times, downright gory. There is an impressive amount of depth and character development going on in a show that seems to have such a simple premise - not only did this catch me off guard, but it hooked me.

Well, I wouldn't describe the sountrack of this show as 'groovy', per se, however it's absolutely fantastic. Fully orchestrated throughout the various environments and adventures, there was a lot of love and effort put into the musical scoring of this show. I can't tell you how impressive it is to me as a music teacher - to hear out a well done, fully orchestrated show these days. It's rare, and frankly, it just fills me with joy. I mean there is some finely coordinated music to be heard here and...well, it just helps to complete the experience for me. Here, just listen for yourself!

In a time and age where many believe that anime is losing it's appeal, this show shows me that there is hope yet. MiA is a well crafted show that delivers a meaningful story, characters, and heart-touching scenarios that will certainly impress many. It lacks of the same old, cliche slapschtick and fan-service that many modern day shows rely so heavily on, and it delivers an adventure that will not only move you emotionally, but leave you wanting even more. I would highly recommend you check it out, when you get the chance.