Valkyria Revolution: Making the Best of a Bad Situation 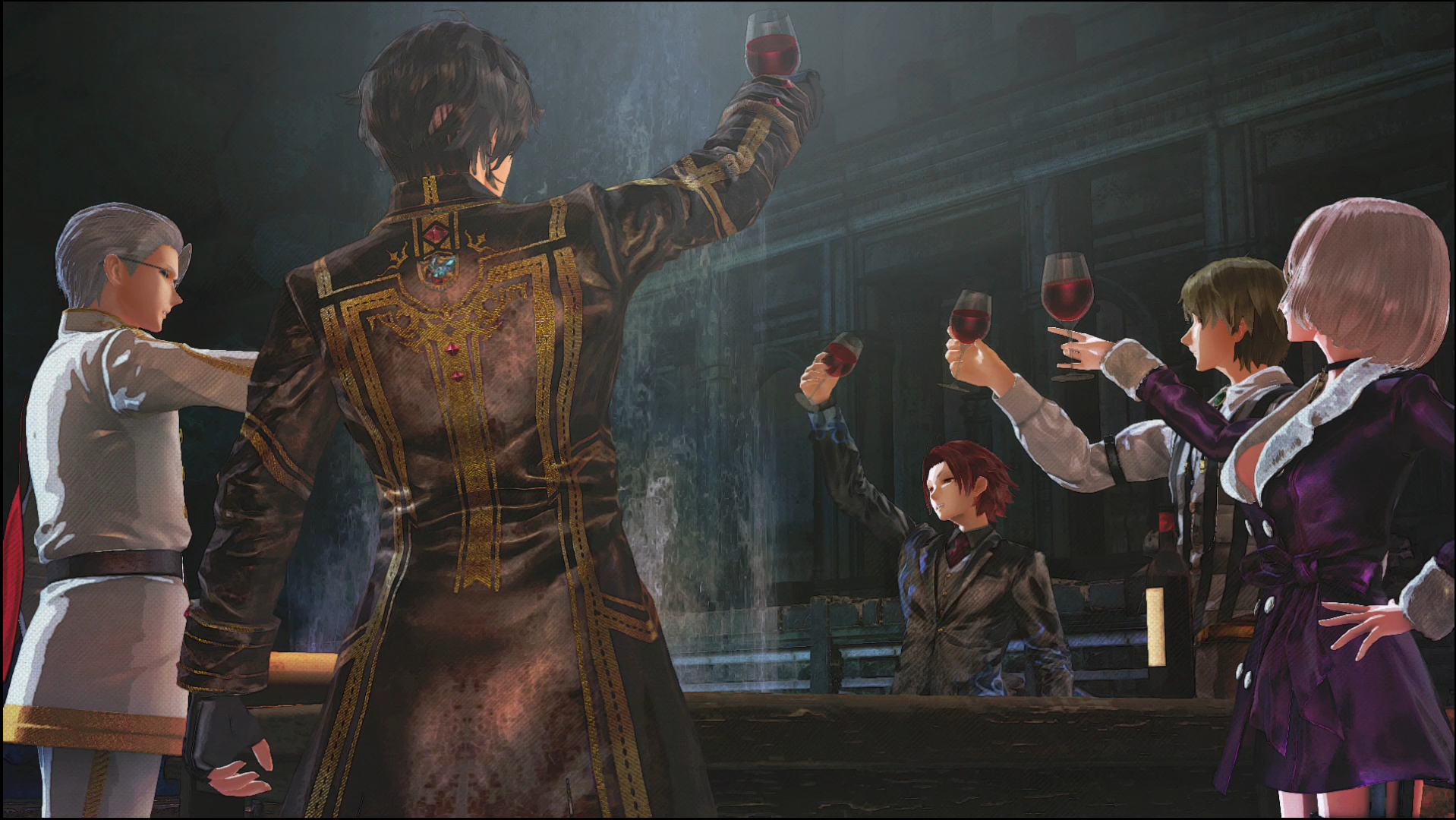 This article contains some spoilers for Valkyria Revolution and the direction of its plot.

Valkyria Revolution is not well-liked. I've seen few who think this attempt to re-invent the brand as an Action RPG amounted to anything. By the nature of its design, it's a repetitive game that almost completely destroys any preconceived notions of Valkyria as a strategy franchise. It seems like it has no business holding the name. But deeper within Valkyria Revolution, one particular aspect of the series remains – managing morale. This overtakes the entirety of the story as well as the gameplay, building the whole experience on the back of this singular element. Though from the beginning, it's not clear that this is the case.

Both the plot and gameplay are deceptively simple and, in the case of the story, also familiar. 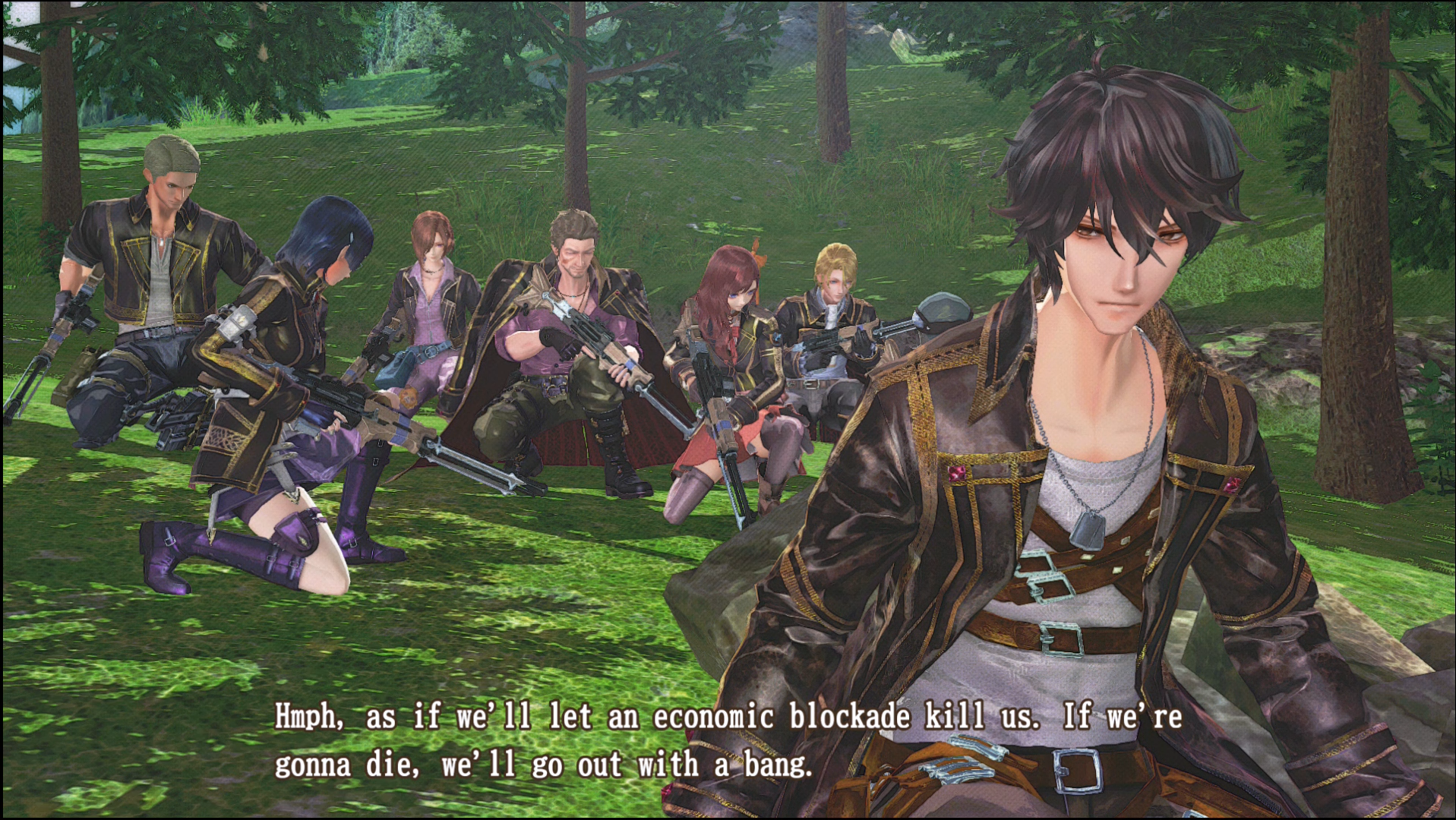 It opens with the small nation of Jutland fighting back against the invading Ruzi Empire. The Anti-Valkyira Squad features the core combatants who are also the upfront personalities. Each member of the team has their own tale to help flesh out how the war impacts both soldiers and civilians. They portray the day by day with chatty dialog, internal conflicts and battlefield interactions.

In some form or another, this premise is true of every Valkyira game. The gameplay, however, is a drastic departure.

Instead of the series' previous formula, where characters take turns moving in a semi-real-time combat zone, Revolution has all the aspects of the world moving at once. Some elements remain, such as the ability to pause combat when readying skills. Yet instead of giving the player complete freedom, characters are constrained by a timed action bar. 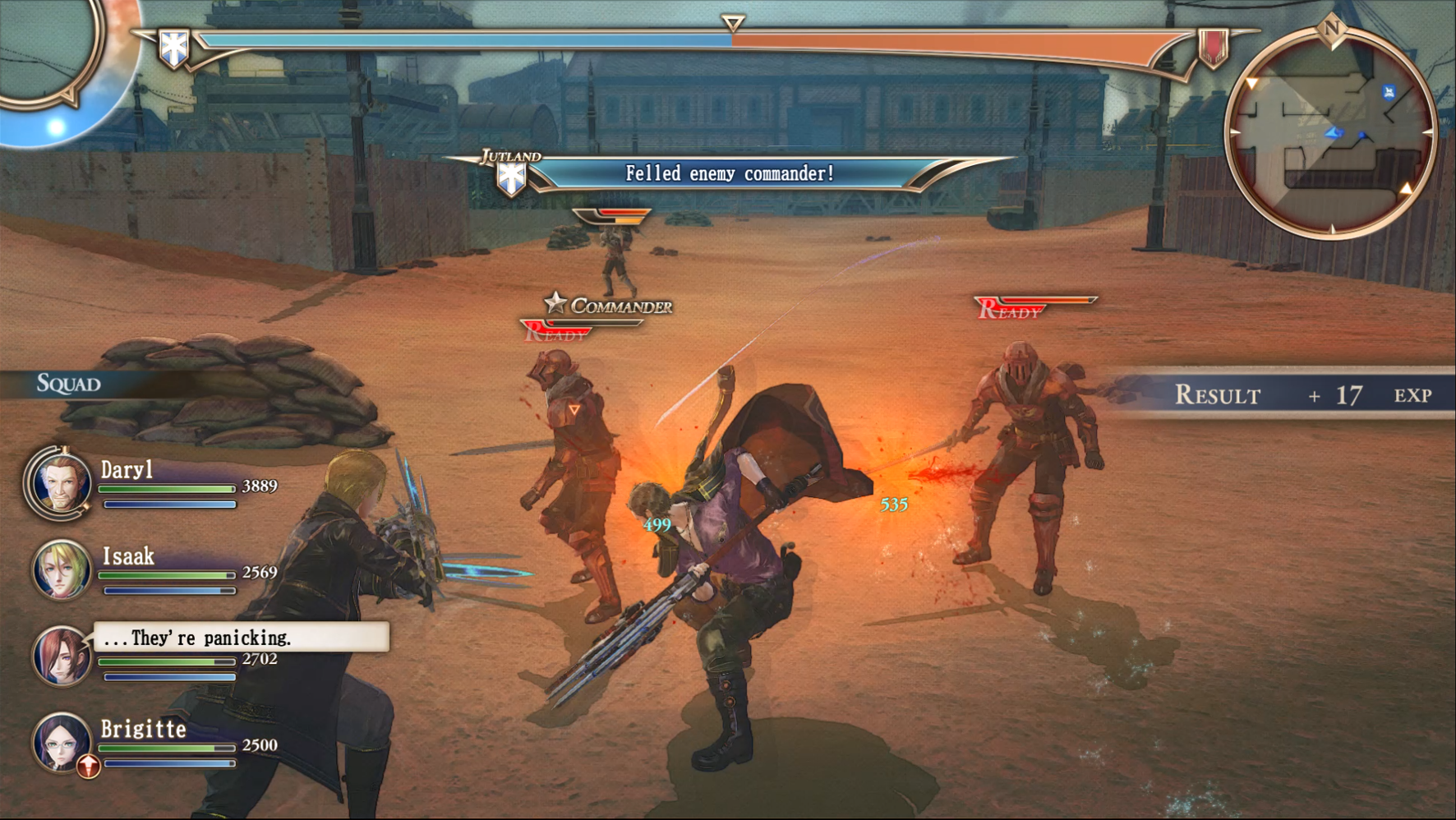 Due to the player's limited resources and the fodder-like enemies, early combat comes down to throwing a grenade to knock down opponents and spamming attack to finish the job. With the limitations on character actions, it's oddly restrictive if you view it in the hack 'n slash mold.

The first dozen hours of Valkyria Revolution are not encouraging. It comes off as well-worn tale with an awkward battle system. For all that, both elements eventually start coming into their own.

Previous Valkyria games present the front line soldiers as the driving force of the story while also occasionally giving the player a glimpse of the invading empire's internal politics. In Valkyria Revolution, the Anti-Valkyria Squad is nearly irrelevant despite their heavy presence. Instead, an almost entirely separate cast moves the narrative. 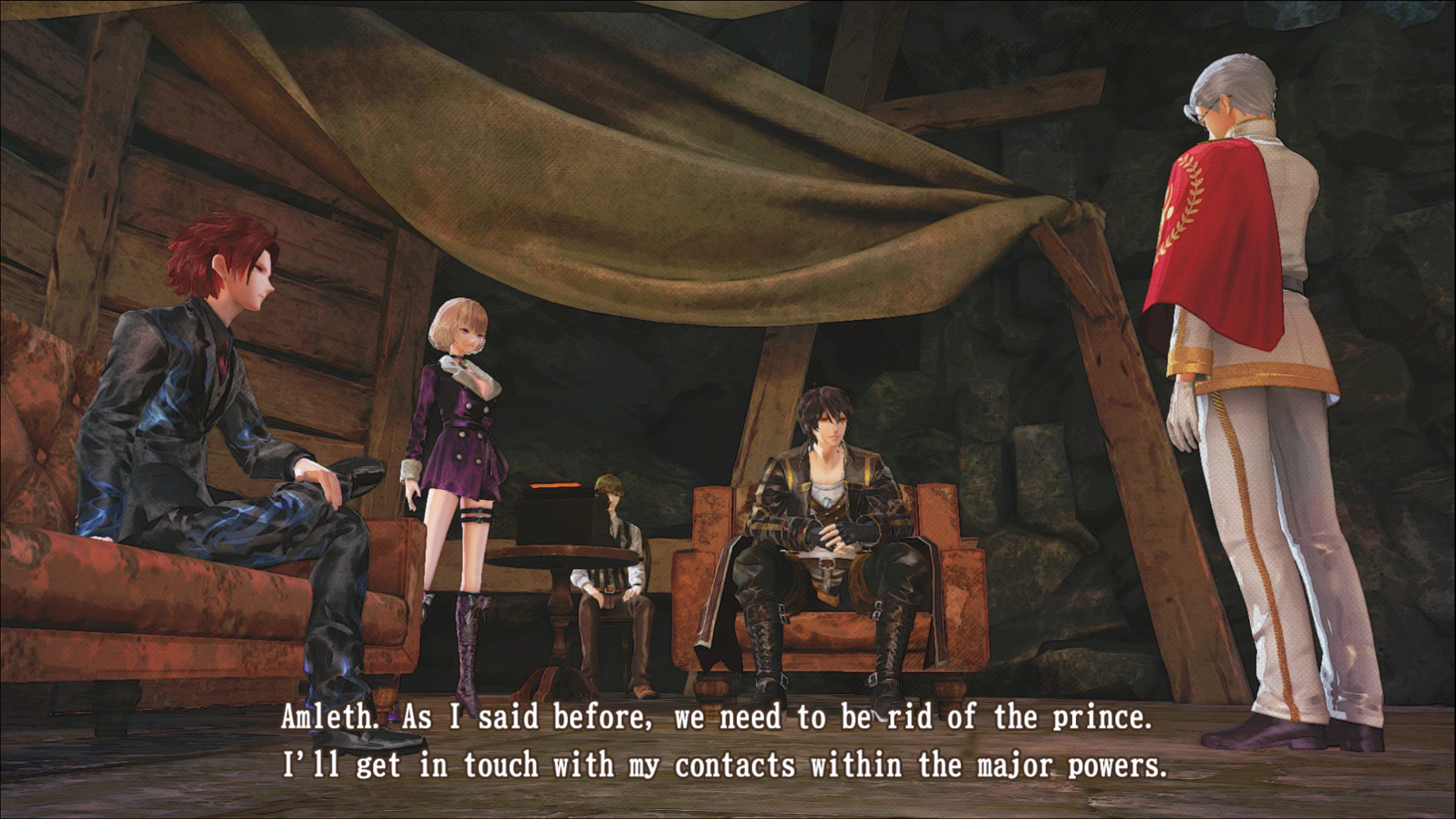 Amleth is the central figure and captain of the Anti-Valkyria Squad. Though his allegiance aligns not with his country, but the Circle of Five – A group of individuals secretly pulling the strings of the entire nation of Jutland. The majority of their conflict is fought through information warfare. Military, government, business, media and intelligence are all manipulated to enact a plot of revenge.

Initially, the people Jutland have an undying love for their country, flag and soldiers. This begins to wither as the war turns for the worse and the nation's actions are questioned from surrounding parties. On their road to freedom, Jutland liberates and occupies foreign territories. Tension grows from those outside of the conflict who become uncertain if “liberation” or “invasion” are Jutland's true intentions. This starts to bleed into their internal politics and creates doubt among the people as well as the politicians. 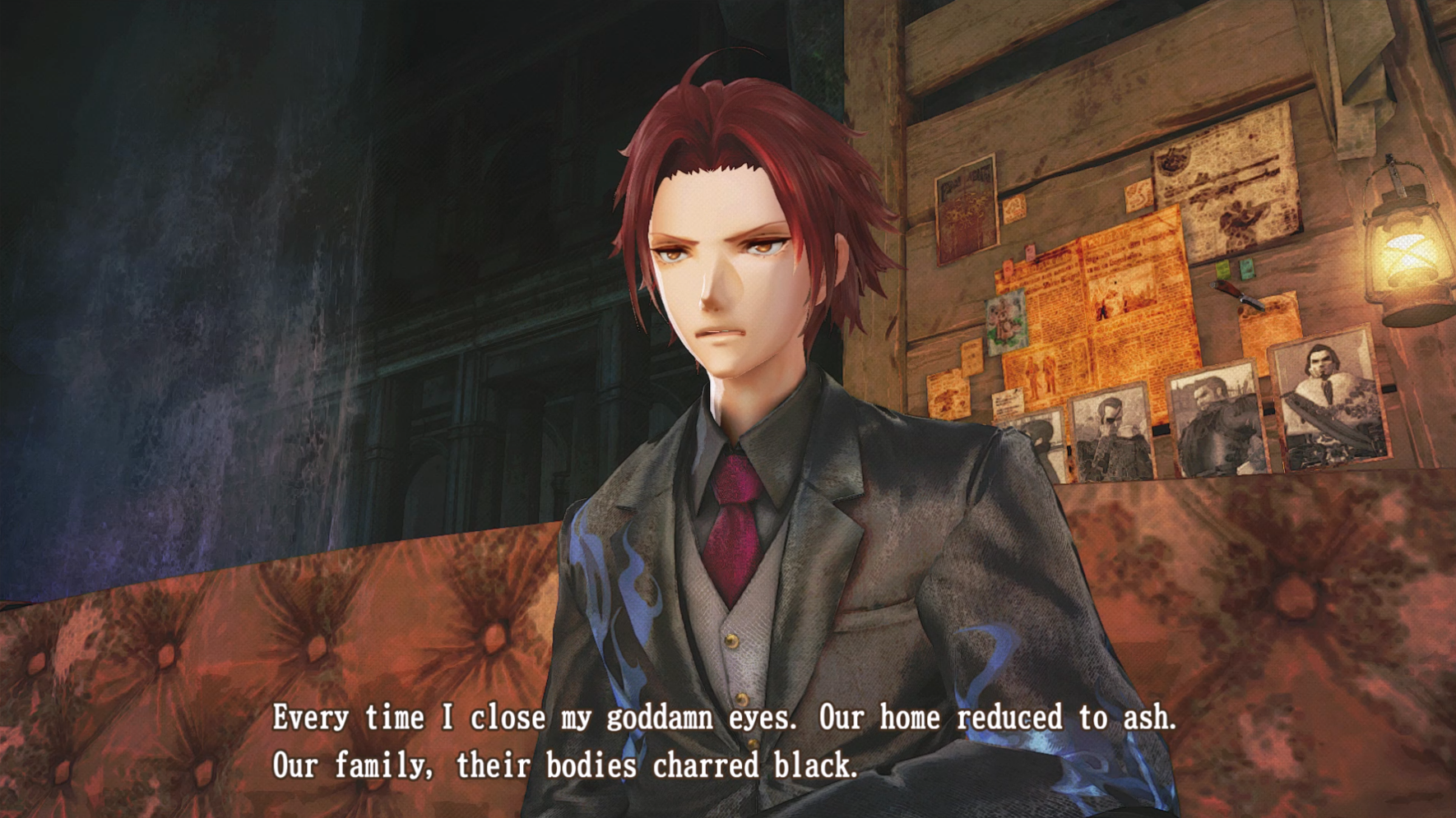 From the player's perspective, Jutland is undoubtedly the stereo-typical “good” small oppressed nation who fights back against all odds for justice and freedom. The Circle of Five's role is a bit more questionable. The war is a means to get back at those who wronged them. Dealing with the ebb and flow of the public opinion and foreign support for Jutland is a constant struggle. Each member reaches out from the shadows to change the course of war in their own ways, and not always for the better.

Beyond the local interests, there are also world powers whom are keeping an eye on the war. They often seem far off but, when they do intervene, paint the conflict as a small and pesky quarrel. They stand ready to subdue the weakest nation at a moment's notice.

Around the time morale starts overtaking the main plot, the gameplay starts shifting its own way. The most basic enemies, whom previously could be wiped out in a single combo, start soaking up significantly more damage. Rather than overpowering foes, manipulating their state of mind to expose vulnerabilities becomes the core strategy. 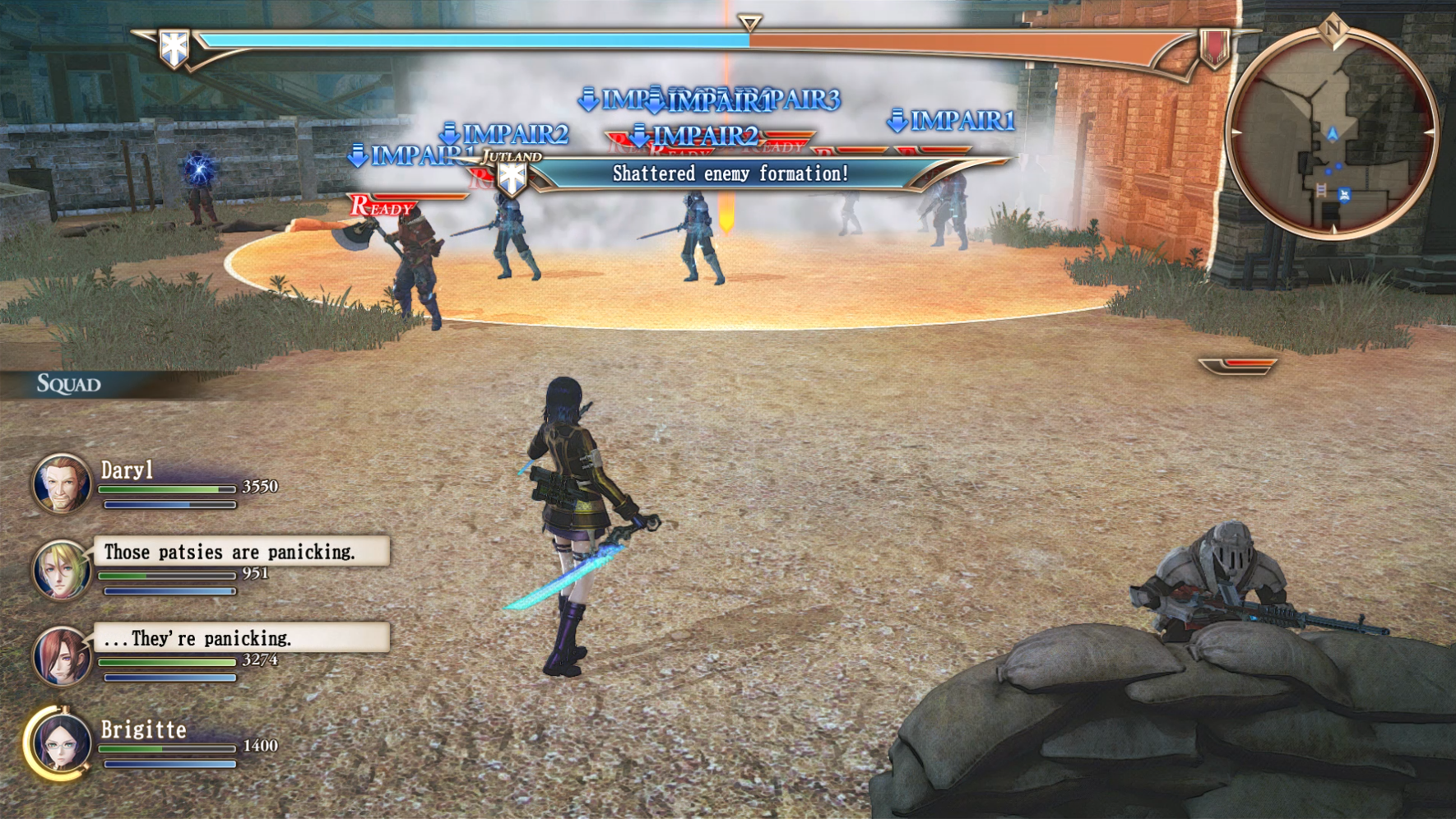 Shattering formations, disposing of commanders, slaying retreating units, using specialized weaponry, as well as exploiting enemy weaknesses affects the opponent's state of mind. Impairment lowers their defensive capabilities, fear sends them into a panic and daze leaves them stumbling as they attempt to regain their standing.

These apply to the player's party as well. Though due to the real-time nature and chaotic battles, it can be difficult to manage an individual ally's state. What is essential is to maintain high morale. 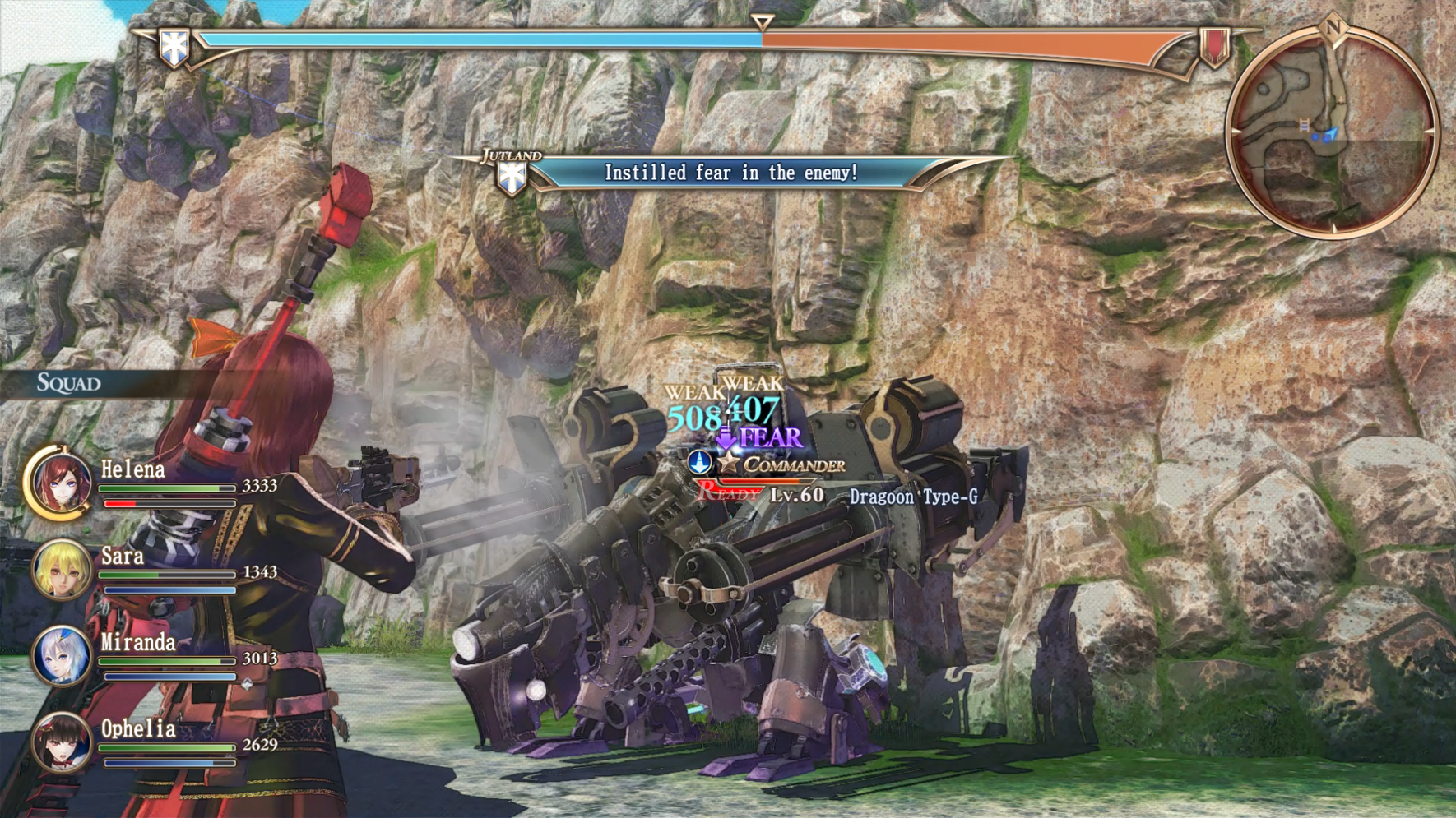 Each battle has a bar that shifts between ally and enemy forces. The side with the greater rating gets massive stat boosts and increased action speeds. Building morale is mostly tied into the same actions that affect the enemy's state of mind, in addition to other events. Completing optional objectives, defeating foes in a single blow and disarming enemy traps help your standing on the battlefield. On the flip side, enemies boost their own spirits by calling for reinforcements or infiltrating bases.

While the gameplay and story are unique in their framing, the set up in both cases is frequently more interesting than the implementation.

The dialog and key points presented in the plot are often adolescent in their portrayal. Whether or not the Circle of Five should have started the war in the first place is a constant question. The answer is obvious. Nevertheless, it's continually debated at the lowest level of discourse possible.

Even though the gameplay initially gets away from being repetitive, it eventually loops back around. Effectively exploiting enemies, particularly with low resource attacks, can simplify an entire encounter to spamming a single skill. Th is is especially apparent in the boss encounters whom have obvious vulnerabilities and limited options to increase morale. On the flip side, not having the proper weakness prepared for a boss will create a slow and grueling encounter. There's no real in-between. Either you're exploiting it or struggling.

The limited number of maps is a blessing and a curse. You'll return to the same locations with similar enemy set ups over and over again. It's bothersome early on, but knowing each encounter allows the player to optimize and roll over them like nothing. These repeat missions also provide valuable items for leveling your arsenal. 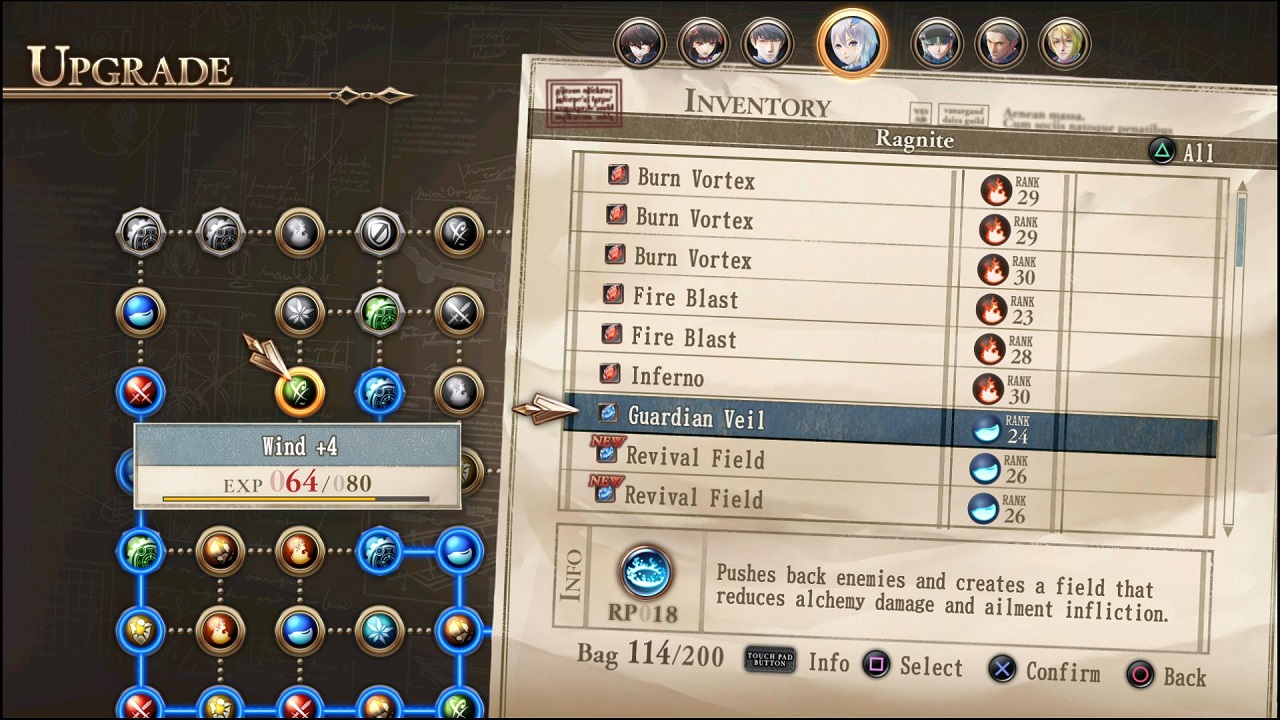 The skill tree system for upgrading a character's weapon is a logistics nightmare. Spells and skills are used as the resource, but it becomes a convoluted mess. It's frustrating trying to remember who needs what and which you're trying to hold onto while also effectively leveling weapons.

Still the core concepts shine through enough that both the story and gameplay feel fresh and satisfying. Despite at times being overly simplistic in their execution, there's a lot of ambition to do something new here.

The number of moving parts in Valkyria Revolution's narrative is enormous, and it's amazing that it never falls apart. The arc about the divorced father in your squad trying to impress his son is presented with just as much detail as the war room meetings that help shape the campaign. Yet it all feels whole because almost every piece relates back to someone in the Circle of Five. There's a lot of personal arcs with the five characters that hold an unusual amount of weight. A tragedy in one of their lives can bring a new perspective to the table and potentially shift the direction of the war. 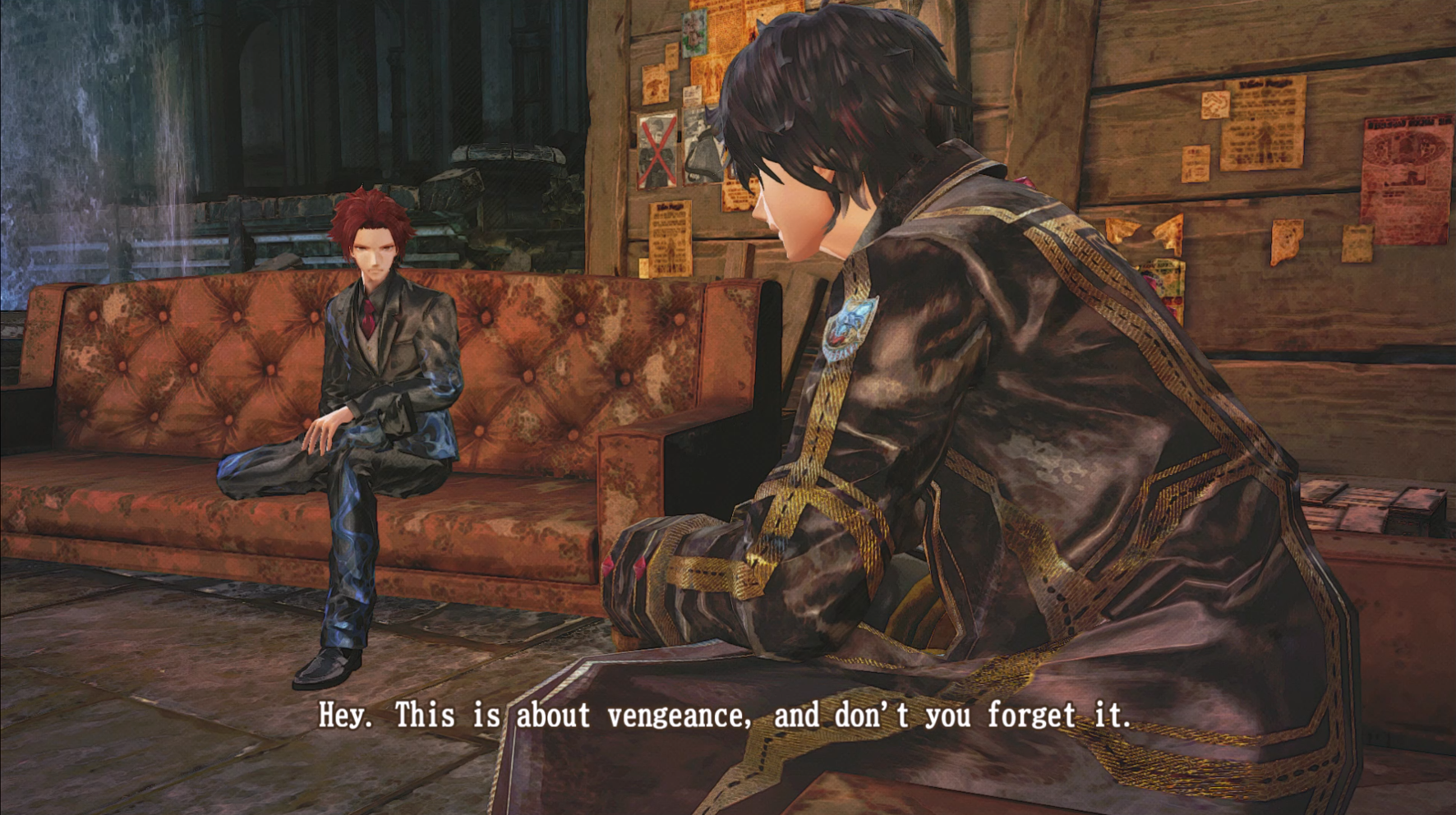 It's strange to see such a commitment to a revenge plot and that they never abandon their main purpose. Each member perceives the war in different ways at different times, yet no one views their end goal as completely unjust.

The content of each individual scene is often lacking in execution. On the other hand, the ways it expands its world is not like any other. You see this war from almost every angle. The research paper-like context for delivering the story, with secondary and primary sources that the player references, is perfectly suited to incorporate this. 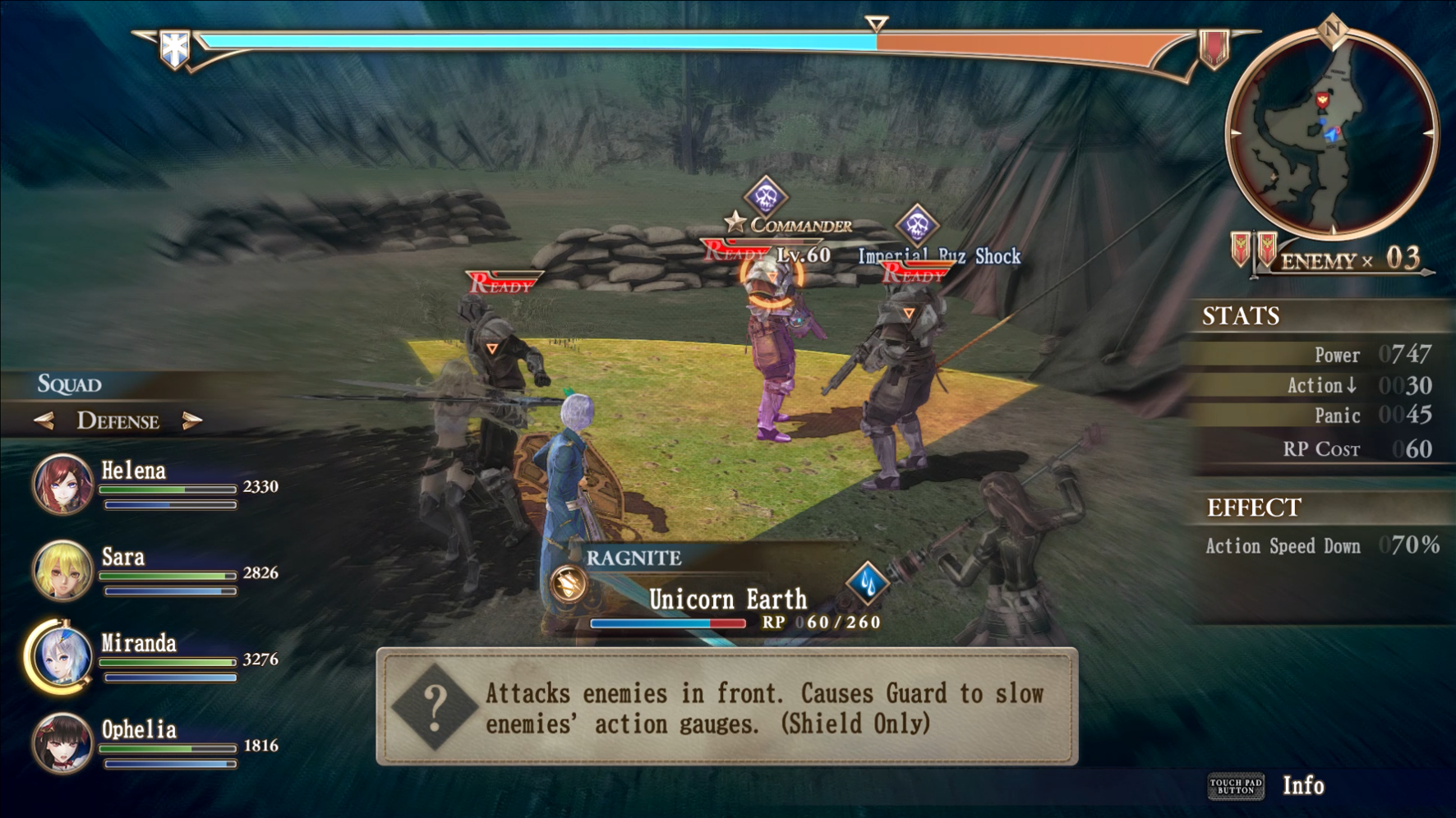 While I don't think the gameplay is as intricate as the story that pulls from the same theme, seeing the steady shift of power in each battle to your favor is incredibly satisfying. When played right, your squad is an ever growing tidal wave that only gets stronger through an encounter. With enough advantage, the player can essentially tear through soldiers with no resistance.

Valkyria Revolution, as a whole, is the worst of the three localized releases. It's not terrible in anyway, but moment to moment it can often be mediocre. But the ideas behind the game shows a real desire to not only do something that feels completely new, but also expand the scope of the relevant parties

We'll likely never see another entry like Valkyria Revolution. Either way, I'm glad the series had a chance to unshackle itself from the standard formula.