Game Development - Wrapping up 2017 with a Bang

Yes, you heard that correctly. We are doing a game update in January and among the various adds, there will be a new arcade game called Rob’s Adventure. You know how Rob is always wanting to have some fun? Well, now he gets to explore and battle bad guys.

Check out the screens – just a small sample of what you can expect!

Ok – here are some samples of the game in action. You will battle through waves of enemies, one hit and you’re toast! Maneuver carefully and watch for the patterns in the enemy firing. The path is there but you must find it!

Besides this addition, we are working on various quality of life improvements to the game. These include performance boosts and general tweaks to make the game as fun as possible. We’re committed to Boss 101 and want you to have the best experience.

We have a few more new updates for you in January so stay tuned. Without giving too much away we can say this – we hope to see a lot more people getting access to Boss 101 soon! HAAAAAAAAAAA!!!

Also - we have been working behind the scenes to get rolling with our next big adventure.

We want to take a moment to express again how grateful we are for your kind support during the development and release of Boss 101. We've been living our dreams so we can bring you the best entertainment possible. Boss 101 is only the beginning of our adventure together.

I think the end of our postmortem sums up our feelings well...

I am telling you right this instant you CAN live your dreams. Anything is possible if you are willing to put in the effort. That’s not mumbo-jumbo claptrap, that’s the TRUTH.

Boss 101 is a project of pure creation. Myself along with my friends Manon and Joshua managed to make something I personally never thought I’d see. A game without any apologies or compromise. The game we released is basically the game we wanted. That release was based on nothing except two questions we asked ourselves over and over. “Is it fun?” and “Is it done?”

That’s it. That got this game finished. When we started, the project was small and the scale was limited. The framework went up quickly and we started asking “Is this fun?” If the answer was no then we worked to add things to make it fun. Adding features we felt had value. From there we iterated and played the game. At every step, the same question was asked: “Is this fun?” This was coming out of our own time and effort.

At one point the game pretty well hit all the story beats and we felt the value was there for anyone who would buy it. So, we released it.

And you know what? When I hit “Publish” on Steam I felt something strange. I felt no urge to apologize for the game. No sense of “Well, if we only had a few more months” or “You know, you should have seen the ideas we LEFT OUT! OH BOY you would not believe how awesome they were!” It was strange as we got past the first few hours of release and early buyers were playing and commenting on the game. Most all were getting the vibe and liking what they saw.

Really though, and I mean this — the game was already a huge success before I hit that publish button. It was a success because it proved something I long imagined possible. You can live your dreams. It’s doable. You can even do it with other people. Heck it’s BETTER when you journey with other people. Friends. Family. People you trust and can laugh with. Makes the whole shebang a lot easier.

In fact, you might learn something important about yourself while you’re on this journey. I pretty much guarantee it. I can’t tell you what that lesson is since it varies from person to person but I can tell you one thing. If you live your dreams, one day — at the end of your grand life, as you lay there thinking to yourself during your final moments on this magnificent planet — you won’t wonder “Well, if I only had a few more months” or “You should have seen the things I WANTED to do! OH BOY you would not believe how awesome they were!” No ma’am. No sir. You’re going to feel right 'cause you didn’t compromise.

Be true to yourself everyone. . . and live your dreams.

Thanks again and have a FANTASTIC new year. Talk with you soon,

Boss 101 Info Roundup
Out now on Steam!
Boss 101 Steam Store Page: http://store.steampowered.com/app/380920
Please check out the Steam Store if you would be so kind! 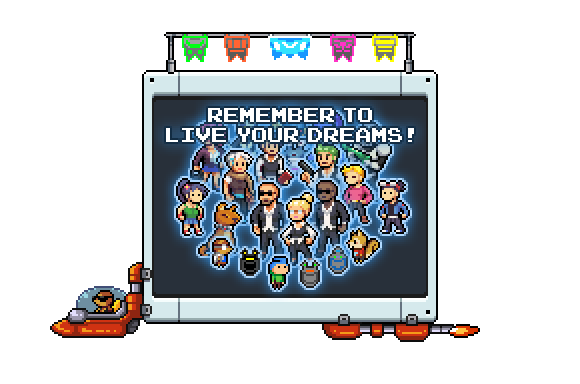