I got a Switch!

After months of anticipation, I finally got my hands on a Nintendo Switch. I can’t say I was dreaming of it like I was the N64, even the Xbox 360 had me pretty excited, but those were my first forays into their respective generations, this felt more like an obligatory purchase. (I say purchase, but it was a Christmas gift). Don’t get me wrong, I was looking forward to getting the console, I guess it’s just that I’m a little bummed that the Wii U turned out the way it did, and upset that I have to get a new console keep playing Nintendo games. Notwithstanding, I thought I’d give my first impressions, just like I did for the Xbox One and PS4.

The first thing that stood out to me as I opened up the box was how heavy and well-constructed everything was. High build quality is very important to me, and it leaves not only a great first impression, but also a lasting impression. The system has a weight to it, the buttons (although small) feel tactile and responsive, even the cables were a huge step up from what the Wii/Wii U came with.

What impressed me was how quickly everything loaded. After the slog that is booting up the PS4 and Xbone (30 and 45 seconds respectively) and lengthy game installs (admittedly, PS4 is really good about disc based installs) it was a breath of fresh air to see how quickly Switch was ready to play. Even the initial update to get things going was remarkably quick on my parents pokey DSL connection. The menus are cleanly laid out, and easy to navigate, no ads either, yay!

Clean and snappy, but a little too simple for my tastes...

As far as the joycons, I’m not as sold, it’s just not the best layout. Now I totally get why it was designed this way, the two joy-con setup makes local two player matches a breeze to set up, and I totally love that aspect of it. However, it’s hard to deny that right analog stick isn’t in the most ergonomic position. I was also taken aback at how difficult the little joy con straps are to get off. I guess I’m turning a blind eye to joy cons because of they are ultimately utilitarian, I can respect that. Also, there are other options available.

I purchased the pro controller a few days later and I am very impressed. Despite it’s shortcomings, I was a huge fan of the Wii U Pro controller, but I can safely say, that it knocks it from the #2 spot in my book. It doesn’t dethrone the Xbone controller, but that’s largely because of functionality (headphone jack, bluetooth, analog triggers, native compatibility with PC, and replaceable battery) if I was to go simply by ergonomics, it would be my favorite. Sony really needs to step up their game with the Dual Shock 4. 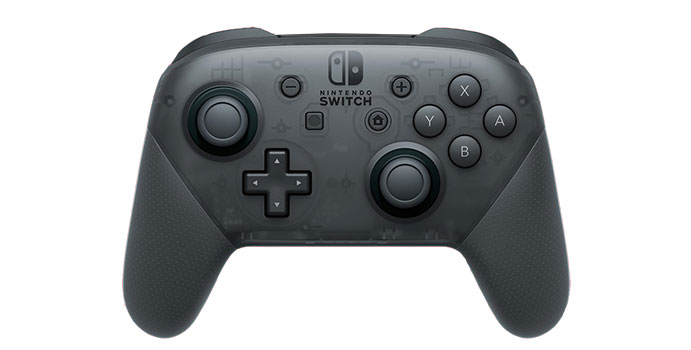 Just a few mondern amenities and it would be perfect!

I’m also a fan of the aesthetics. I like how small and compact the case itself is. The game boxes are similar in size to the PSP cases, and the cartridges are tiny, maybe even too small.

Now I’d be remiss if I neglected to talk about games. I currently have six games, Super Mario Odyssey, Sonic Forces, Disgaea 5 Complete, Ultra Street Fighter II, Puyo Puyo Tetris and Bomberman R. I attempted to get a healthy mix of genres so I can get a good impression of the capabilities of the system.

Super Mario Odyssey is by far the game I wanted the most, and the game I spent the most time playing. In many ways, this is the game I’ve wanted Nintendo to make since I finished Super Mario 64, and the comparisons to it and Super Mario Sunshine are fair. I disagree with the notion that’s it’s trying desperately to be Mario 64. I feel like it’s paying homage, but quickly shows it’s evolved passed that. I love the mechanics, the sandbox style gameplay, and the graphics and sound are fantastic. Thus far, it hasn’t blown me away, but I’m definitely enjoying myself. In my book, it’s on par with Super Mario 3D World.

Sonic Forces, at least thus far, feels like a “by the numbers sequel” to Colors and Lost world, with a little Generations thrown in for good measure. I’m a pretty big Sonic fan, and I found myself struggling to get excited. All the pieces are there, but it doesn’t measure up to the sum of it’s parts. If I had to rate it now, I would give it a 7/10, but that may be too generous. I’ll have to play more to be sure.

I’ll admit my exposure to Disgaea 5 was limited. I love the ¾ view and it looks like there’s tons of content, but the amount of information they threw at me was overwhelming. I played for maybe an hour tops, and they showed me the ropes, but it may be too complex for me. Pokémon is more my speed when it comes to RPG’s. Again, I need to give it more time to give a fair assessment.

I fully expected Ultra Street Fighter II to be a cash grab, but I was wrong. Capcom really did a lot to improve an already stellar game. Evil Ryu and Violent Ken add some variation to a roster that hasn’t been expanded in over 20 years. The controls feel tighter, even the not so great “dpad” on the left joy con was fine, and supers feel easier to pull off. The AI, which has been a huge complaint since day 1, is much more balanced. It’s an old game and still overpriced, but I can’t say no to Street Fighter II.

Puzzle games do not get enough love so I was more than happy to add Puyo Puyo Tetris to my collection. I spent a decent amount of time playing around with the story mode but had a blast. The controls feel really tight and there’s quite a few modes to go though. Now I’m way better at Tetris, but I still enjoy Puyo Puyo, but I’m totally lost on them being together in the same match. If I ever get the hang of that mode, it could be fun. Definitely looking forward to spending more time here. 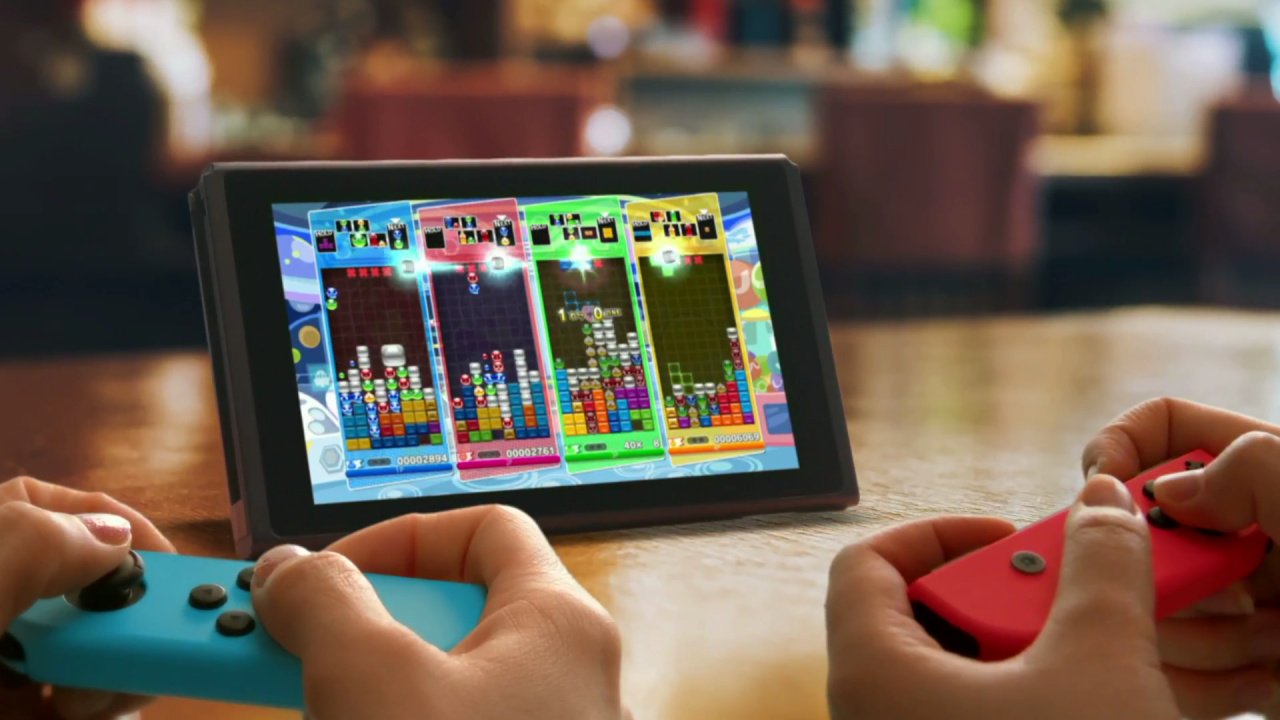 This is why I bought the Switch version

Finally, we get to Bomberman R, I adore the fan service and it seems like it’s cut from the same cloth as Puyo Puyo Tetris. It’s a fun, Japanese styled game with a focus on multiplayer. My experience on this has been limited as well, but thus far I’ve been having fun with it. It’s probably not the best version of Bomberman out there, but the fact that it’s on Switch makes it pretty desirable.

I would like to levy some complaints. First off, this is an expensive console to own. The pro controller isn’t too bad, but a pair of joycons are $80 and I still need to get a grip for them. That’s over $100 just to add another player. SD cards aren’t terribly expensive, but they are when you start getting into the kind capacity that the Switch needs, they start to jump up. My plan is to get a 128 GB card, but I could see needing to upgrade eventually. The dock is $90. It’s to the point where if I ever had to replace the actual Switch tablet, I’d be better off buying an all new console.

On the software end of things, I still feel like things are lacking. The eShop is bare bones, even copying the design of the 3DS or Wii U eShop would have been preferable. There’s no apps for Youtube, Twitch, or Netflix, there’s not even a web browser. I get that it’s a console, but these are pretty basic apps that should be here by now. There’s also very little room for customization beyond a simple black or white theme. It would be wonderful to be able to arrange your library, use custom wallpapers or avatars, and make it your own. It’s also a pain to totally turn the system off. These are all things that can be fixed with firmware updates; fingers crossed.

As for now, the verdict is still out. Four days simply isn’t enough time for me to make a comprehensive review. In all fairness, it takes an entire generation to make a total assessment, especially now with all the changes consoles go through, throughout their life. I will say that it’s been a very positive experience. The Switch certainly has its own feel, which I love. Xbox and Playstation feel too “iterative” to me anymore. I love that Nintendo took the risks and offered us something fresh, let’s just hope they can keep up the momentum.