I've been thinking about how to tackle this one for a while. Back when I first got the notion that blogging about ancient cartoons from my childhood based on video games was going to be a thing, I knew SMBSS was going to be a show I was going to cover early on. The tricky thing is, it's really three shows in one - the live action Mario Brothers part, the animated Super Mario adventures, and the animated Legend of Zelda. I briefly mulled over the idea of doing a seperate post for each one, but ultimately decided that they all belong together. Even if DiC Entertainment and their home video partners disagree and didn't include them all in one "complete series" set. 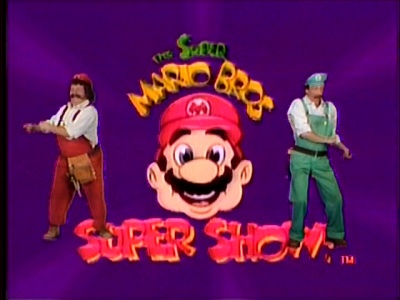 To set the scene, it was fall of 1989, and Nintendo was king. Having successfully rebuilt and almost exclusively captured the home video game market after the industry collapse of 1983, Nintendo was pretty much a juggernaut in the United States. Their unique intellectual properties was at the crux of that, and Mario was certainly the most popular and well known. In fact, a survey in 1990 found that Mario was more recognizable to children at the time than Mickey Mouse. That's insane.

Hot off the heels of the US release of Super Mario Bros. 2, Nintendo and Mario was riding high, and lots of media companies came calling to license out the properties. But in the five years since Saturday Supercade aired, Nintendo had become much more guarded and protective of their IPs. DiC's president, Andy Heyward, had to work on Nintendo for nearly a year before they gave the go-ahead for a show based on Mario & Zelda (and Captain N came about as part of that deal as well).

Now, SMBSS wasn't actually a Saturday morning cartoon per se - it was a syndicated show that aired in the afternoons if your local TV station licensed it. In my area, we had the DC Fox station air the SMBSS on right after I got home from school at around 4 or 4:30. It was perfect timing - I'd get home just in time to watch the show, then spend the rest of the afternoon before dinner playing my NES. As I mentioned, this was three shows in one, so let's break them down.

This is one of the most surreal, odd shows related to video games I ever remember seeing.  In this segment, Captain Lou Albano - whom I'm sure most people my age remember as a manager in the WWF - portrayed Mario, and Danny Wells was Luigi.  The show took place exclusively in the "Mario Brothers Plumbling" office, pretty much a basement in Brooklyn. 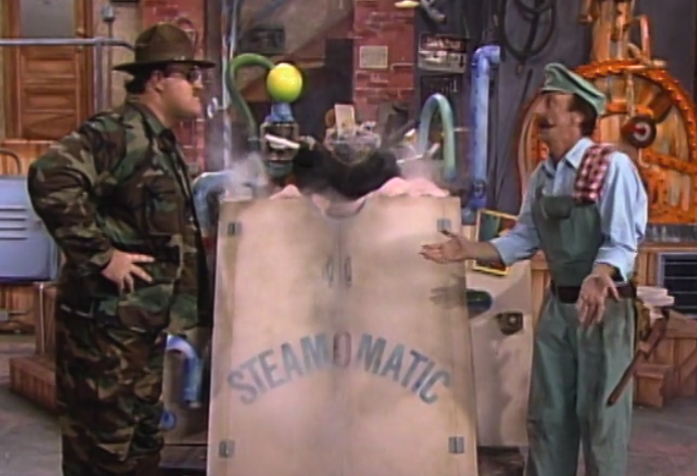 Mario Bros. Plumbing was basically a bookend wrapped around the Super Mario or Zelda cartoon of the day.  They had a pretty minimalist plot, that often revolved around a "celebrity" guest star coming to the Mario Brothers for help with some sort of problem that wasn't necessarily plumbing related.  And I use the word celebrity loosely, because the guest could range from the B list to the D list, or anywhere in between.  Most notable was Magic Johnson, NBA superstar.  The worst was probably Rob Stone, the older brother from Mr. Belvedere, who was treated as if he were some major star being mobbed by fans. Of course, they exploited Captain Lou's ties to the wrestling industry, and pulled in Rowdy Roddy Piper and Sgt. Slaughter as guests on a couple of ocassions. 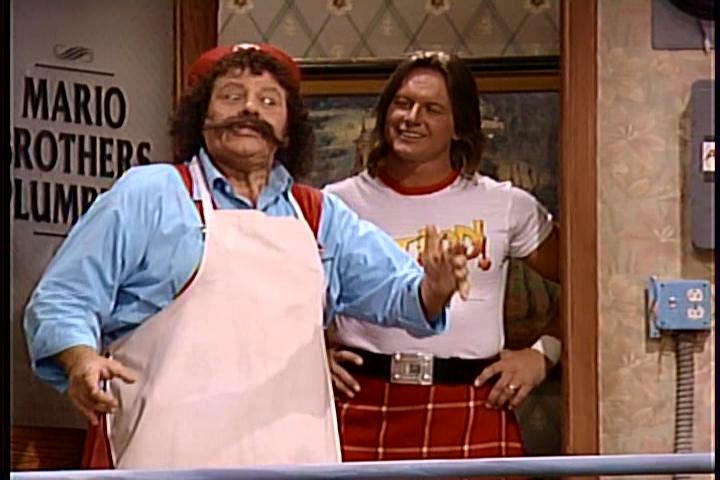 These segments often get discarded on re-broadcasts and home video release, which annoys me. They weren't exactly Academy Award material, but damn it, I enjoyed the live action stuff.  I was a huge wrestling fan, so it was cool to me that Lou Albano was playing Mario. Luckily, they are a part of the streams of the series on Netflix, though THAT'S a bit of a mess since they don't include the episodes that featured a Zelda cartoon - more on that later.

Ahhh, late 80s Nintendo, where many of the things about he Mario-verse we take for granted today weren't set in stone.  At least, not in the US.  For example, the color of Mario & Luigi's overalls and shirts.  "Peach" is referred to as "Princess Toadstool", and is depicted with red hair (limitations of the NES wouldn't allow her sprite to have blonde hair), and "Bowser" is known as "King Koopa".  Speaking of Bowser, it should be noted that he's actually somewhat of an amalgam of his early NES appearances, and Wart from Super Mario Bros. 2.  This is somewhat fitting, as the show combined elements from both the first two US Super Mario Bros games.  As a result, we'd see enemies like Goombas and Hammer Brothers alongside Birdo and Mouser. 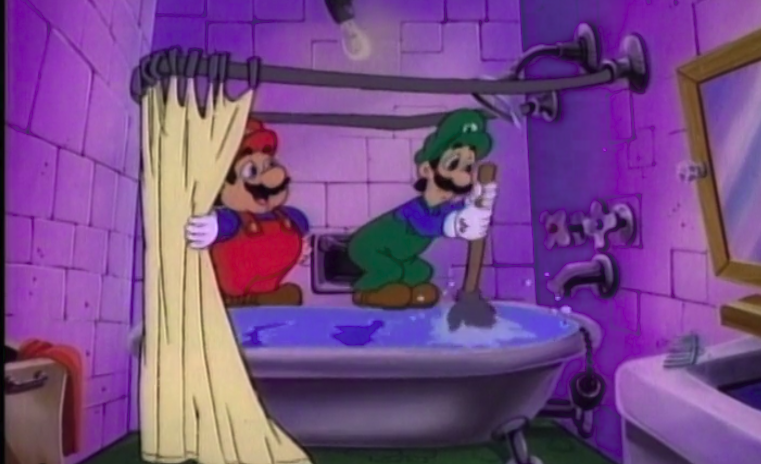 The basic premise here, as explained in the show within a show's theme song, is that Mario and Luigi were plumbers in Brooklyn, who discovered a warp zone to the Mushroom Kingdom while trying unclog a drain. If you think for second about what that implies, that means Toad and all the other Mushroom Kingdom residents must be coprophilous fungi, relying on poop from our world for sustinence. I still haven't quite connected the dots as to how that relates to Peach/Toodstool yet. 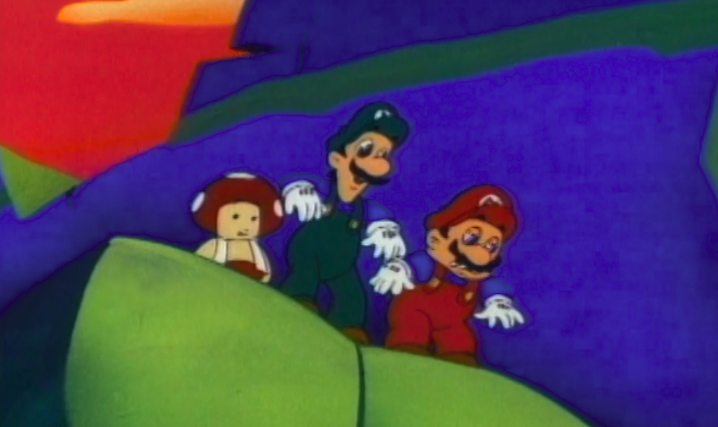 Anyway, Mario & Luigi got stranded (?) in the Mushroom Kingdom and began a series of adventures with Princess Toodstool and Toad.  Every episode began with Mario narrating an entry from his "plumber's log" - a takeoff on Star Trek - wherein he'd briefly describe where and his friends were and what they were up to. Every episode had a themed land, such as the wild west, or ancient Egypt, which the Koopas were either trying to conquer or maintain control of, and Mario and the gang would ultimately run them off.  "King Koopa" would always escape, usually by using a potion to summon a door - yet another SMB2 reference - and episodes quite frequently wrapped up with the annoying Everybody Laughs Ending trope. 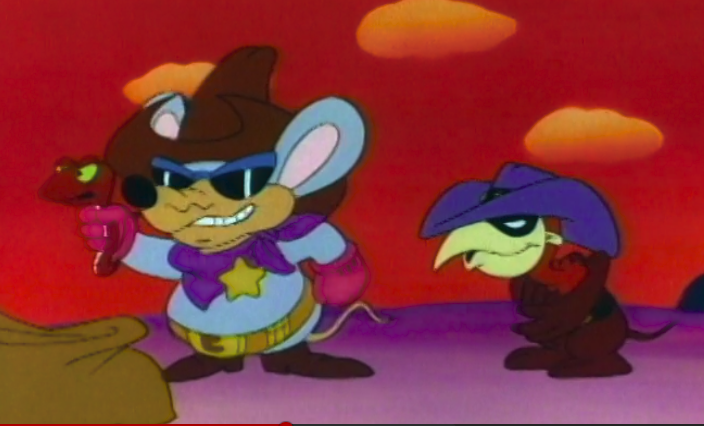 The show's original run used a LOT of licensed music, usually covers of popular contemporary songs. This, of course, tends to not to work out so well with re-airings and home video releases, so if you see an episode on DVD or Netflix, all these songs will be edited out, replaced by generic SMB level music of some sort.  On that note, the show made heavy use of actual sound effects and music from the games. 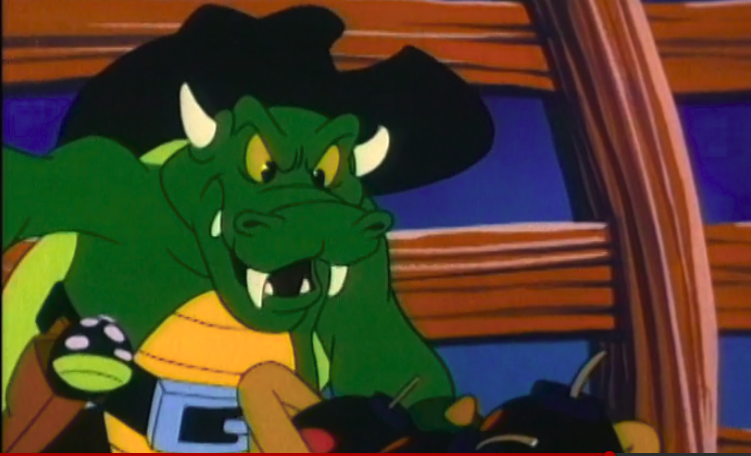 This segment would eventually spawn subsequent seasons/spinoffs based on Super Mario Bros.3 and Super Mario World, respectively, but they're seperate shows in and of themselves, and I'll cover them some other time, perhaps.

This was absolutely my favorite part of the Super Mario Bros Super Show.  Every Friday, instead of a Super Mario cartoon, we were treated to this epic cartoon that focused on Link and Zelda as they tried to keep Ganon from acquring the Trifoce of Wisdom and ruling over Hyrule forever.  Like the Super Mario cartoon, this incorporated elements from both of the first two games in the series. 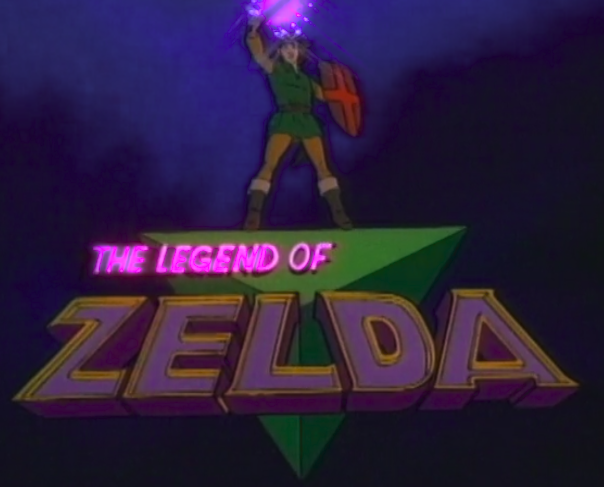 In this incarnation, Zelda isnt just a mere damsel in distress, but the appointed guardian of the Triforce of Wisdom, and Link is some sort of knight/squire in her service, who ulimately wants to get into her pants.  Ganon is seen exclusively in his pig-wizard form, and no references are made to him having ever been human. Of course, this show was made before Nintendo even hinted at that - Link to the Past's instruction manual was the first reference I ever recall seeing to Ganondorf.  Though therer were some some references to Zelda II, there was alo no mention of the Triforce of Courage, and ultimately the fact that Link, Zelda, and Ganon each represented an element of the Triforce. 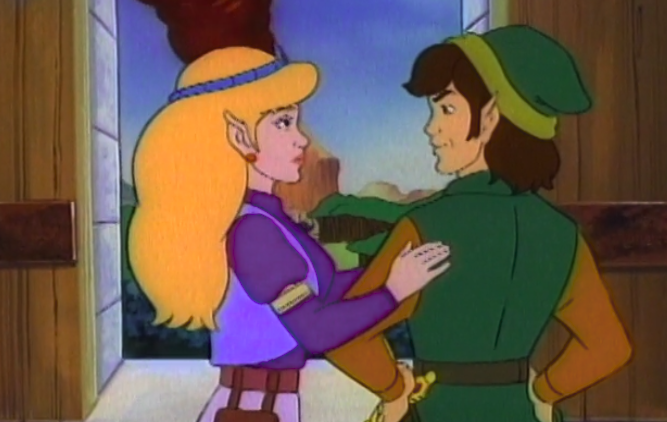 Link was a pretty damn cocky son of a bitch here, and I loved it.  While he was arrogant and brash, he was a very capable fighter.  He'd frequently outright beg Zelda for kiss, usually getting blown off.  Zelda did seem to reciprocate his feelings to a degree, but was much more focused on her role as defender of the Triforce.  She'd frequently get irritated with Link, which would cause him to blurt out his catchphrase "Well excuuuuuuuse me, princess!" 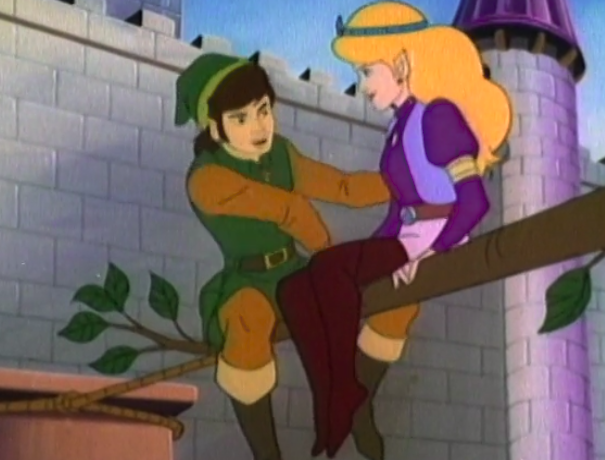 As much as I appreciated Mario, Zelda was and is always my favorite Nintendo IP, so this show was my jam.  To me, this is my absolute favorite take on the dynamic between Link and Zelda - in fact, only Breath of the Wild has come close over 25 years later.  Link and Zelda need each other, and too often, the series downplays Zelda's role in the protection of Hyrule, or makes her some sort of last minute deus ex machina that can only deliver the final blow after Link has done the bulk of the work.  Here, she's portrayed as Link's equal, even having to save him on a couple of occasions.

And that's a wrap.  Unfortunately, the Super Mario Bros. Super Show only lasted one season.  As I mentioned, there were additional series based on later Mario games, and Link and Zelda (with the same voice actors) appeared as recurring characters in the second season of Captain N.  But this was a weird time for cartoons on network TV, as Congress started requring kids' shows to be "educational", and networks started balking at animation in favor of more cheaply produced nature series.  But I mean, I learned how to find Ganon's lair by bombing Spectacle Rock from this show, so doesn't that count for something?