Review: Tales of the Rays 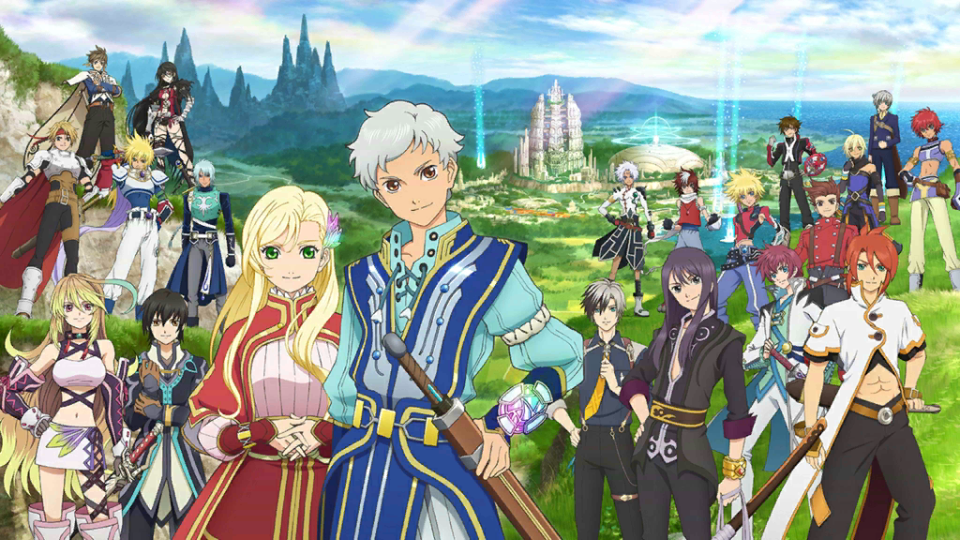 The mobile market is oversaturated with freemium RPGs. The foundations of the gashapon model, while not inherently malicious, are capable of sliding off the slippery slope so easily that it’s been exploited by countless companies of all shapes and sizes. Nevermind the fact that such a model of game design has so many caveats that its sheer inclusion is a deal breaker for countless players, but when you have so many games attempting to cash on on similar principles, it’s no easy feat to convince players to jump aboard. How do you stand out enough from the crowd to be a worthwhile experience in an oversaturated field?

Tales of the Rays’ answer to that is to do what it always does - be a quality action JRPG - but compressed into a freemium mobile format.

Rays is a traditional Tales experience adapted into the typical mobile gacha RPG. The story, while simplified and drip-fed through dozens of gradual updates, is full of dialogue. The plot itself isn’t much to write about; it feels like a vanilla tale of our leading man Ix and his childhood-friend-slash-waifu Mileena roped into saving the world by a government that is obviously hiding something from them, and our new world of Tir Na Nog is probably going to explode if he doesn’t do the right thing. To its credit, Ix catches on to the fact that something’s fishy quickly, and Tales games have a history of playing with clichés to subvert them. But the events quickly fall into a cut-and-paste formula of “make a magic clone of a Tales continent, meet a Tales protagonist, Ix learns an aesop, stab a mirror” and stick to that pattern for the most part, deviating only for minor hooks or limited-time events. The story has remained this way for 10 story chapters, though a few wrinkles have come into it now and then. 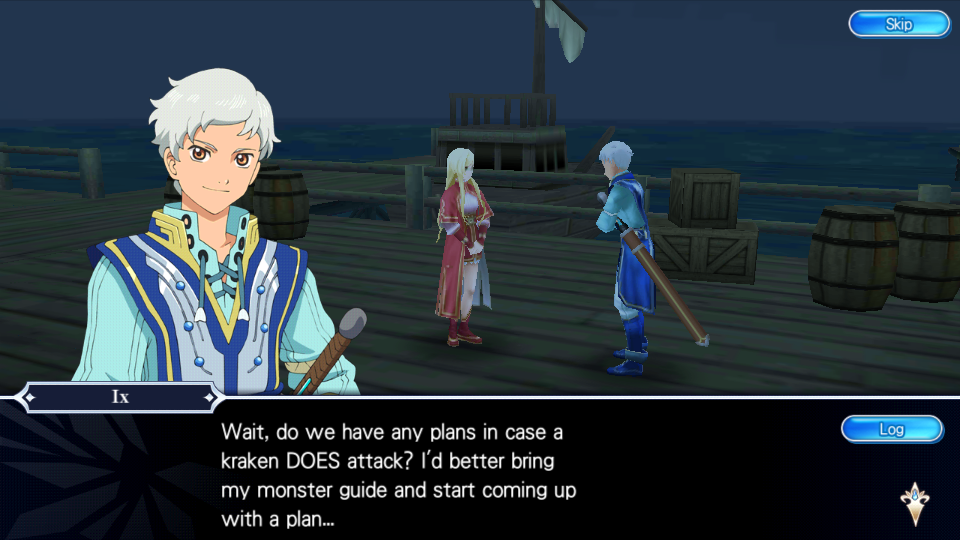 This episodic formula is saved by a series of meaningful and fun interactions between the various crossover characters, frequently playing off each other. There are seeds sown which could bloom into far more engaging plot hooks, but given the nature of this game and its continual updates, I can only critique the plot as it currently is - an incomplete but entertaining series of events. I’ve not felt strong emotions over the comedy or drama, but I’m interested enough to constantly keep my eye on what happens next.

Rather, the combat takes the center stage. I’m always skeptical of action games built for mobile devices, as I expect the touch screen controls to intrude on gameplay. To my pleasant surprise, Rays manages to convert the traditional Tales action combat system into a reliable control scheme on a touch screen smaller than my hand. Everything is as simple as a tap or a flick, and the cornerstones of Tales combat mechanics are here; free movement, Artes, combos, flashy Mystic Artes (Or Mirrage Artes, effectively the same thing), guarding, and configurable AI. 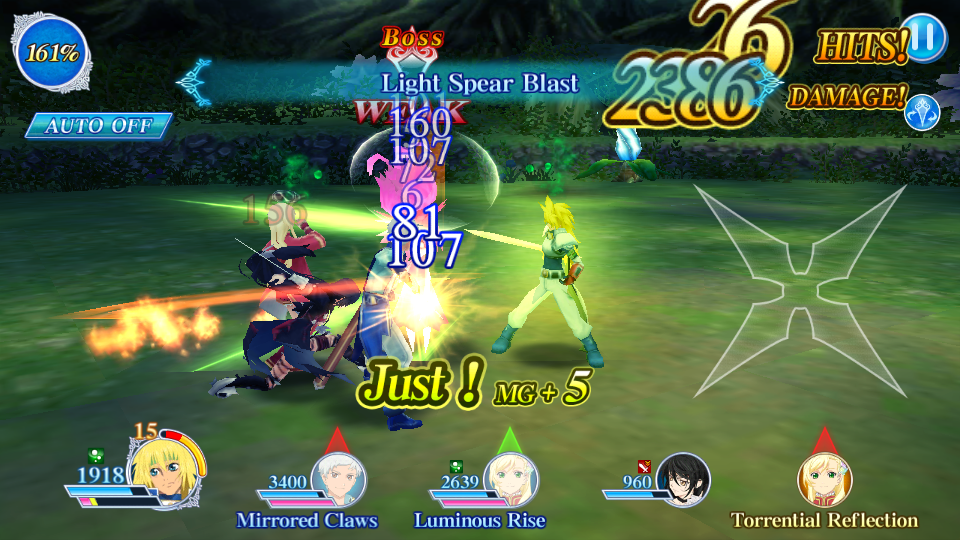 As expected, many of these elements are simplified and streamlined, sometimes to their detriment. For instance, every character only has three preset AI settings, some of which may be completely useless with their current loadout. But your moves mesh well with the returning CC mechanic to create fun battles, allowing skillful combos and effective tactics to trump sheer numbers even when the game insists that you’re dangerously underleveled. Battles have a certain ebb and flow to them as you moderate your CC gauge, yet you have the liberty of playing more offensive or defensive as you please to exploit enemies. It’s a constantly involved battle system that rewards skillful execution and counterplay - like most Tales games, but comparing it to its brothers and sisters doesn’t make it any less fun!

The visuals, while not ideal, do their job well. Colors pop and characters stand out, but the same environments are copy-pasted across a handful of recurring environmental themes. Tales monster and character designs always put a smile on my face, but it’s easy to get taken out of a plot moment of everyone dwelling on the designs of the ruins when I just see the exact same ruins I explored on the other continent. Exploring between battles is unfortunately underwhelming due to linear and bland map design, making every dungeon trek a dull waste of time. There’s optional branches for loot and sometimes even a well hidden secret, but they’re so insignificant I almost always prefer to set these inconsequential segments of not-gameplay to Auto. Thankfully, you’ll spend much more time battling than exploring. 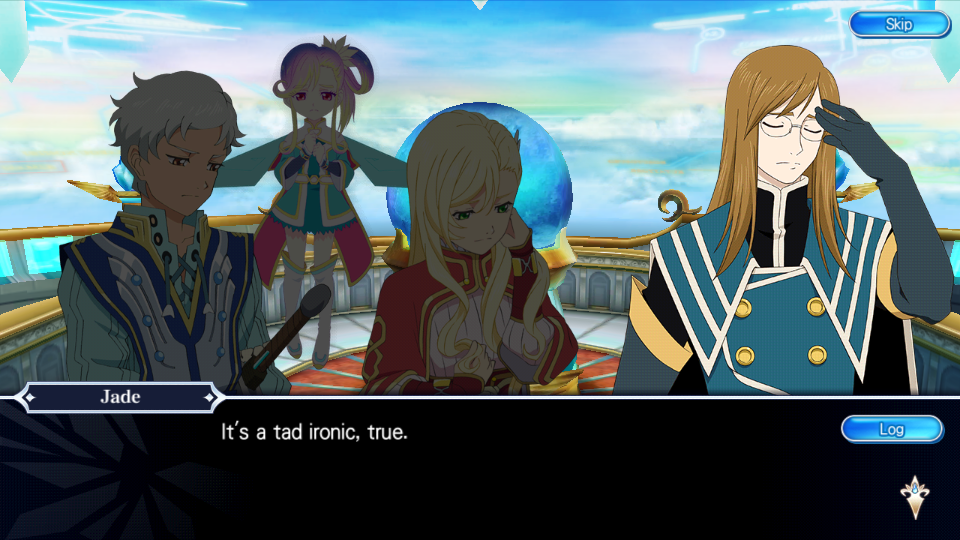 Even more thankful is that the soundtrack lives up to its expectations! While there’s very few brand new songs, each one of those new songs is a delightful ear-worm, and the soundtrack maintains a healthy and lively variety by borrowing from Tales’ history of music. The Tir Na Nog battle theme gets me pumped so easily that it’s become my latest musical addiction.

With that all of this said about the presentation, bear in mind this game will chug and struggle on older devices. I’ve had a few crashes from memory leaks, but my phone is far overdue for an upgrade. The framerate chug I’ve experienced isn’t enough to stop me from controlling effectively, but it’s a constant bother. I don’t expect to have any such technical issues if I play on a device at least a couple years newer, but unfortunately, I can’t verify that personally.

Of course, this game is billed as a free-to-play title, so we need to discuss the microtransactions and how they tie into the game. Throughout your journey, you’ll earn a gradual trickle of Mirrogems. You can also get Mirrogems much more quickly by giving the game your real money. Mirrogems are used to summon equipment, which determines the bulk of your characters’ stats and - more importantly - which Artes they can use when their equipment matches the displayed character. The usual gacha game red flag of being encouraged to spend more to have a chance at getting the best pulls applies. But unlike many such games, I don’t feel a nagging pressure that I need the strongest pulls to build a reliable party for endgame. Firstly, the highest rarity pulls go into an exclusive Mirrage slot, and while pulling a Mirrage does make its matching character substantially stronger, it doesn’t invalidate any of your previous equipment. Secondly, because every 3-star or 4-star weapon has its own Arte attached to it, every weapon has an abstract value independent of its stats. Even 3-star Artes tend to be faster and more spammable than 4-star Artes. And thirdly, for reasons I’ve already discussed, you needn’t rely on maxed out stats to overpower enemies if you push your abilities to execute combos and strategies farther. 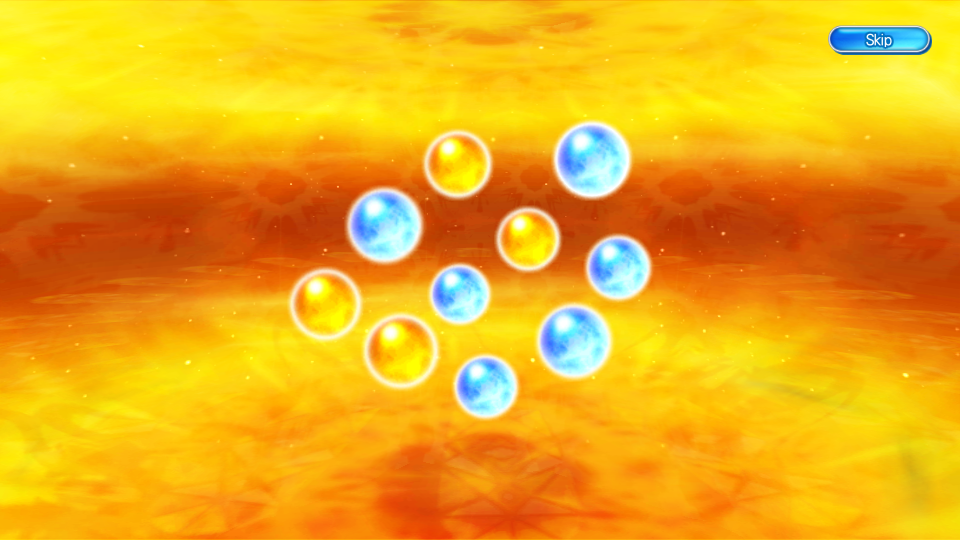 I don’t feel as if Rays uses common gacha game trap of locking you out of endgame content unless you get lucky. Rather, I feel that every new weapon is an opportunity to rework my build and forge new strategies, giving me more reasons to enjoy any new pulls. And if you ever decide you hate any of your summoned items? You can sell them for Prisms, which can instead be spent on any 3-or-4-star weapon, or cosmetic costume pieces. Even though earning pulls is a slow grind, my pulls always feel worthwhile even when Lady Luck is feeling stingy. My only gripe with this monetization as it’s used here is that Mirrogems are expensive. I’m alright with spending days of grinding to earn a 10-pull of all 3-star items, but $20? I can’t recommend that so easily. There’s an alternative microtransaction in the Passport, which doubles EXP and resources earned for a subscription period, but I declined from using it. Personally, I’ll take spending more time on grinding over spending more money any day.

Tales of the Rays doesn’t do much to innovate within neither the Tales series nor the freemium model, but it delivers a good time on both fronts. I’m only hesitant to give it a strong recommendation for two primary reasons - first, there’s very little content other than grinding and the limited story progressions. And hey, if my biggest complaint is “I want more of this game”, then that means it’s doing enough right to get me invested into it! But you’ll be repeating a lot of dungeons built solely for grinding in order to hopefully be geared up enough for the next story update. Whether you love or loathe hours upon hours of repetitive grinding will make or break your interest in this game.

Second, much of the game’s content is gated behind limited events. It’s a standard convention of this model, and I get why these games do it; to spur consistent player activity over recurring periods of time, which is the lifeblood of any freemium game that constantly updates with new content. It’s a necessary evil to support the game in the long run. But in Rays’ case, I’d wager approximately half of the game’s party members, cutscenes, and bosses are permanently missable if you don’t play their given events during their two-week runtimes, which feels more demanding and limiting than it needs to be. Limited characters are easy to get during their events just by progressing through simple story quests, but if you miss their dates? Your only chance of getting those characters in the future is to wait for a gacha banner to feature their Mirrage (if they ever get such a rerun), and hope you get lucky enough to pull that Mirrage. That part in particular puts a bad taste in my mouth, and in the game’s current state, there’s no indication that this content strategy will become any less strict in the future. 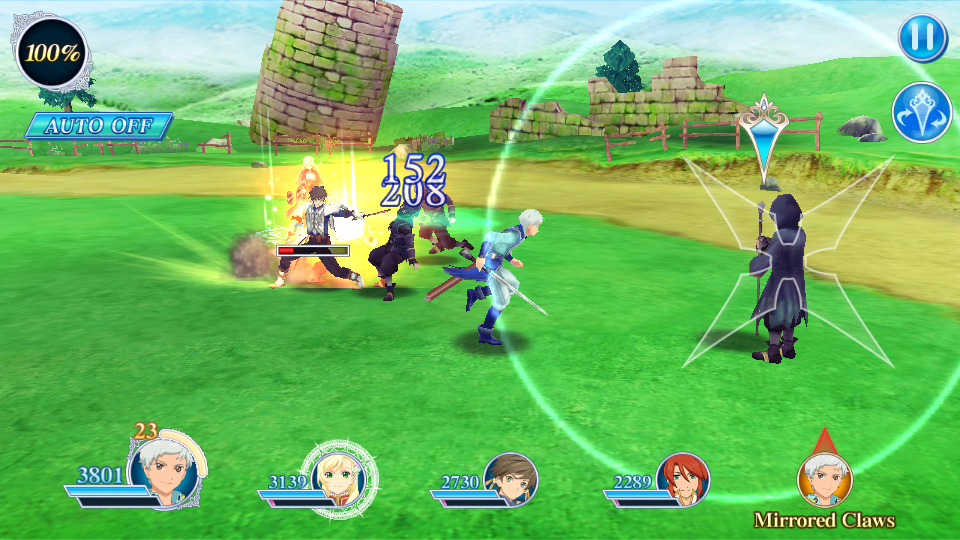 Even so, the foundation of the game remains a consistently engaging action RPG. The combat is fun and flashy, the writing is entertaining, and the presentation… needs a little work, but it’s still enjoyable as it is. If you’re a Tales fan waiting for the next game in the series to give you your big fix, I highly recommend giving Rays a shot. It might be more of an appetizer than a full course meal, but it’s a very tasty appetizer. Just be mindful of your stomach before you grab the full plate.

I give Tales of the Rays a 6.5 out of 10, rating it between Alright and Good.