I think we all enjoy watching rivalries, whether it’s candidates going for an office, companies trying to get our dollar, or employees working to get a promotion. Competition can bring out the best in us, with competition, we often get better products or services and more selection. Conversely, it can also bring out the worst in us, it can raise tension, cause people to be at each other’s throats, or bring about maliciousness to get ahead. Still, that’s what makes them so entertaining to watch. Gaming is no different, over the years we’ve seen lots of rivalries, I’d like to talk about some of them, and discuss what happened, and my opinion of who the victor is. 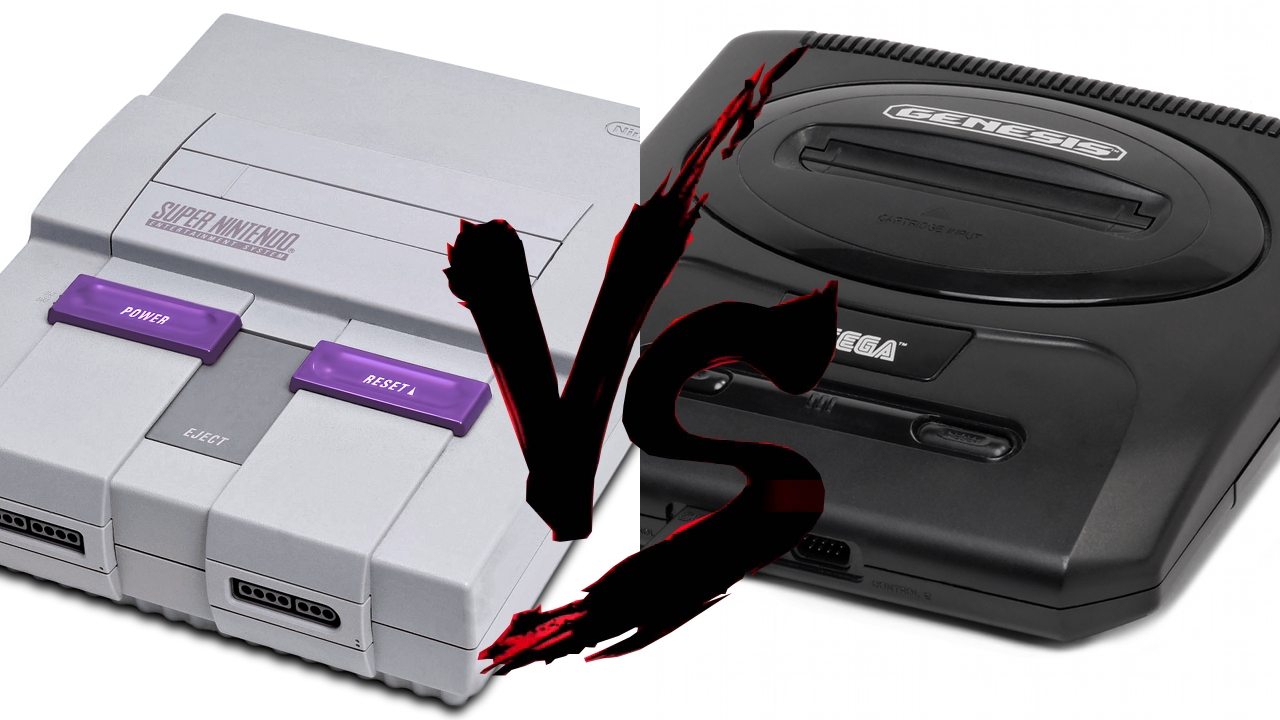 This is by no means the first rivalry in gaming, but it’s arguably the best. When we talk about console wars this is the one we generally think of, mainly because a lot of us were kids when it happened. If you talk to most 30 something gamers, we remember the schoolyard debates on which is better. The Sega Genesis had blast processing, the Super Nintendo had Mode 7.

The reason this is such an iconic war in gaming is because we had two very competitive systems with a lot to offer, and the only way one could win was having the better games. The Genesis had a lot of action games, arcade ports, sports and fighting games. It may have had overall lower specs, but the processer was much faster than the SNES, so Sega played to the systems strengths.  Sega had a very aggressive ad campaign, directly attacking Nintendo. They were seen as edgier and for and older demographic. This helped them get a foothold in an industry where Nintendo owned 90% of the market.

The SNES came late to the party but they made up for it with an overall more capable console, and generally had more refined games. The slower CPU may have dogged the system, but they too played to their strengths, focusing on more “slow burn” kinds of games. Sonic may have been fast and replayable, but it lacked the longevity of Super Mario World. Nintendo had more games that you could play for longer periods of time. Games like Link to the Past, Super Metroid, and Final Fantasy VI may not have been as accessible as the big Genesis games, but they sure gave you more reasons to keep playing.

The good news is that Nintendo still offered faster paced games, and Sega still had RPG’s, so either way you weren’t left out in the cold, it was more of a matter of what appealed to you more. In my opinion, the SNES is the better console. Many of the exclusive games are of a higher caliber, and have aged better, and the third party games tended to run better on Nintendo’s hardware.

In my mind, I don’t think of this rivalry in terms of specific consoles but rather how they compete as a brand. Nintendo has been drifting farther and farther way from making a traditional console, they run by a different set of rules, and they tend to have a vastly different library, so I omitted them from this.

The Playstation brand has done well for a number of reasons, but I feel like they are at their best being the everyman system. The Playstation 1 and 2 dominated because they had something for everyone, they may not have always been able to offer the best versions of games, but the fact they were usually competent and considering almost every third party game gets released there, it’s hard to feel left out. We talk about certain games feeling “at home” on a certain platform, but no one ever says that about Playstation, because everything feels at home there.

Xbox, on the other hand has always strived to offer the “best of” kind of experience. The original Xbox was far and away a better piece of hardware than the PS2, it took Sony a good part of a decade to catch PSN up to Xbox Live. Even the now notorious Xbox One reveal was because they wanted a superior ecosystem. They generally have far less exclusive content, but they exclusives they do have, tend to be well regarded, and be relevant for far longer than the average Playstation game.

While I prefer the Xbox brand, Sony, has historically had more success in gaming. The PS2 absolutely dominated the original Xbox outselling it at a ratio of over 6:1. The PS3 did beat out the Xbox 360 (only by a million units) but considering the horrible launch, that’s pretty impressive. In the current generation, the PS4 is outselling the Xbox One at a ratio of 2:1 and will likely get even further ahead by the time the generation has ended. At the end of the day, Xbox often feels like it's trying to catch up Playstation.

Now this can be a heated battle, so I’ll tread lightly. The big debate really boils down to convenience vs. options. The PC will always have the advantage of having access to better hardware, better performance, being fully customizable and the largest selection of games. Consoles have traditionally been cheaper to purchase, easier to set up and use, and more portable.

The best analogy I can give is the automatic or manual transmission. On a technical level, the manual transmission is superior, it offers more control, better gas mileage, and is more reliable (depending on how well it's cared for). On paper, there shouldn’t be a reason to buy an automatic transmission, but when you consider that they’re far more ubiquitous, easier to use, and maintain, it makes a lot of sense why so many people would opt for the automatic.

Personally, I’m a console gamer, the advantages simply appeal to me more, and the disadvantages don’t really bother me. I wrote a blog detailing this if you’re interested on reading more into it, but I’m quite happy as a console gamer. That being said, I still love my PC for productivity, media, and occasional lite gaming. I would have a very hard time living without it.

I can’t declare a winner here because I feel like they can peacefully co-exist. Neither one is dying, and there’s no reason why you have to chose a side here. I love a good debate, but this isn’t worth killing each other over.

Okay, enough of the hardware, let’s move on to games, shall we? 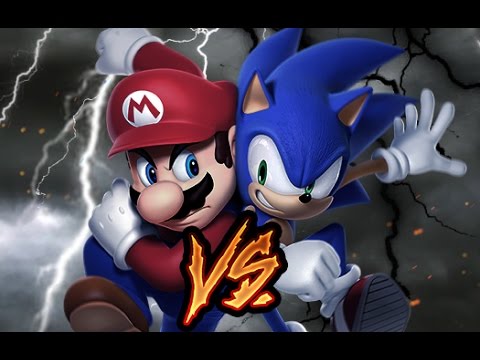 At one point this was a pretty heated battle. Sonic was fast and fun to pick up and play, Mario was slower but had more content and better designed levels. Nowadays, Sonic is a roller coaster of quality and even Mario’s worst games are still 8/10 quality. I love Sonic, but Mario is the better series.

Call of Duty vs. Battlefield

Battle of the first-person shooters. Battlefield has the destructible environments and large-scale multiplayer maps; Call of Duty has the twitch based gameplay and popular zombies mode. In terms of sales, Call of Duty is the clear winner. Personally, I’ve tried multiple Battlefield games and can’t get into them, CoD simply has the better gameplay, even if it is annualized and lazy.

Guitar Hero came out of nowhere and took the gaming world by storm. They created the music/rhythm boom of the last generation. Rock Band took that concept and expanded upon it, giving us (as the name implies) the entire band. It had a much more diverse track list and was more successful at being the party game. I give Guitar hero the guitar sections and feeling more focused, but it still felt lacking by comparison to Rock Band. Too bad they oversaturated the market and neither of them won.

Now this isn’t so much of a rivalry as it is two totally different fighters that are very popular. Street Fighter is the OG fighting game series famous for marginal upgrades and re-releases but as a result each entry tends to be refined to an absurd level. Tekken is the 3D fighter to beat as Soul Calibur, Dead or Alive and Virtua Fighter have been left behind. (Whatever happened to 3D fighters?)

This is the battle for the adventure game crown. Uncharted is more cinematic, it’s set up as a tour de force. One minute you’ll be exploring an underground cavern, solving an elaborate puzzle, the next you’ll be in a firefight, and the next you’ll be chasing down a runaway train in a Jeep, then there’s the multiplayer.

Tomb Raider is more open ended. It spends a lot more time having you exploring the environment, combat sees a lot more refinement because of the progression system. The puzzles tend to be more organic (Uncharted’s feel more compartmentalized) and the platforming is more demanding.

Personally, I love both but Tomb Raider has the better pacing and combat. I will have to give the story to Uncharted though, much better written dialog and characters.

These are by no means the only ones I could have listed. There are others like Intel vs. AMD, digital vs. physical, and PS Now vs. Xbox Live game pass, but this blog would go on forever. So, what do you guys think? Sound off in the comments below, and do be civil.