I've been a Nintendo fan through and through. Their games and other forms of entertainment offer a glimpse into creativity and wonder that some games just don't offer me. Sometime their ideas are called gimmicks, or sometimes they're called innovative. Regardless, Nintendo knows how to get people talking. The Miiverse can be called one of these: a gimmick, or something very creative and fresh.

On a November in 2012, Nintendo introduced Miiverse to the world. A social online network meant for sharing experiences, stories, and drawings. On November 7, 2017, only 5 years later, Nintendo ended the service and possibly the life of the Wii U with it. Although my time with it was limited, I honestly liked the very charming feeling of community that it fostered. It's like Destructoid in that way. But with even more Willem Dafoe posts.

I'll be honest - I didn't what to do at first or how to use the service effectively. Sure I saw stuff online here and there, but actually using it is another thing entirely. I had gotten the Wii U for my younger siblings to play and I never intended to play it much (At least that's what I tell people). But I couldn't resist, I'm a sucker for Super Smash Bros. So when the time came to leave my Miiverse footprint, I think I did alright.

I didn't think too much of it, so I let miiverse be. I didn't touch it again. For a few days that is, because then I discovered the wonders of stamps! Never in a millions years would I have thought that this would have been what kept making me go back to the miiverse. I'm not a very creative person when it comes to drawing, but I still enjoy doing it. Using stamps was an outlet for me to be expressive: I could create scenes by building upon and modifying stamps that you could collect within a game. Because of the Wii U's Gamepad, I could use a stamp on a miiverse post erase something, or just add some simple dialogue, to make some really really stupid stuff.

My first experience with this was through Super Mario 3D World. At first, I was just trying things out - testing the waters. But as I kept collecting more and more different stamps, I couldn't stop. I was addicted. Like a baby who needs his bottle, or like a rabid manatee who's tasted the blood of man, I wanted more. On my discovery of stamps, I made 8 consecutive posts throughout one day. And I only stopped because I am a responsible adult who had work the next morning -- or the Gamepad needed to charge... one of those two. But I'm pretty sure it's the former because I'm an adult. A responsible one. 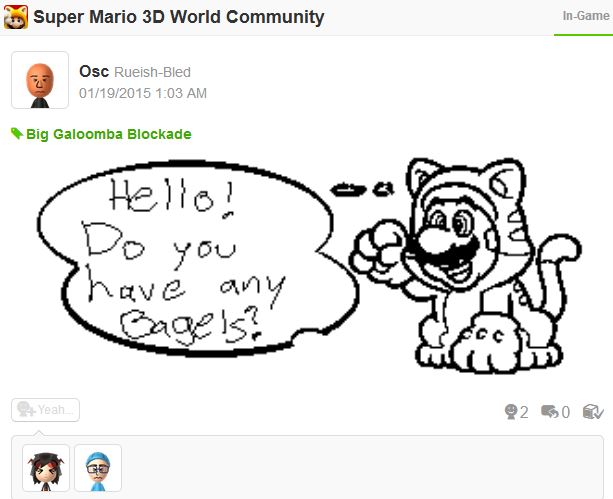 That went on regularly for about two months. I'd get stamps from each stage and after completing them, I'd post something on miiverse. Rinse and repeat. It was fun sharing my doodles and it was fun having others within the community for Super Mario 3D World comment and react to them.

But as we all know, life does its thing, and we get busy or something happens. And games take a back seat. But eventually we return. We return because we love it so much. Doesn't matter what game it is or who made it, in the end we all just like to play games. Miiverse brought that out and made it the essential ingredient to the service. It was a place for people to talk about and share their experiences on games.

I bought Zelda, with the intention of exploring the beautiful world. I knew I didn't have time to play it, but I really wanted to at least have it to maybe, if there was time, perhaps to possibly have the chance of playing it here and there. If I had time, that is.

When I did get the chance to play it, I was absolutely in awe of the amazing world the developers created. This different experience brought out different feelings and it showed through my posts. In contrast to the sillier Mario World posts, my Zelda posts were more genuine and sincere.

So when news hit my ear that Miiverse was closing and that it wouldn't be continued on the new Switch console, I was upset. I had finally started to embrace miiverse after missing out initially. To just let myself post whatever and about whichever game I was playing. I loved seeing all the great drawings and posts people did, the communities it fostered, and everything else that came with it. But now it's over. And with it, five years of collective and comunity-driven fun. Whatever Nintendo decides to do next, I hope it's as memorable as miiverse was.

One thing's for sure, I'll still be having fun with Nintendo's games. Miiverse was the outlet that let me share that. 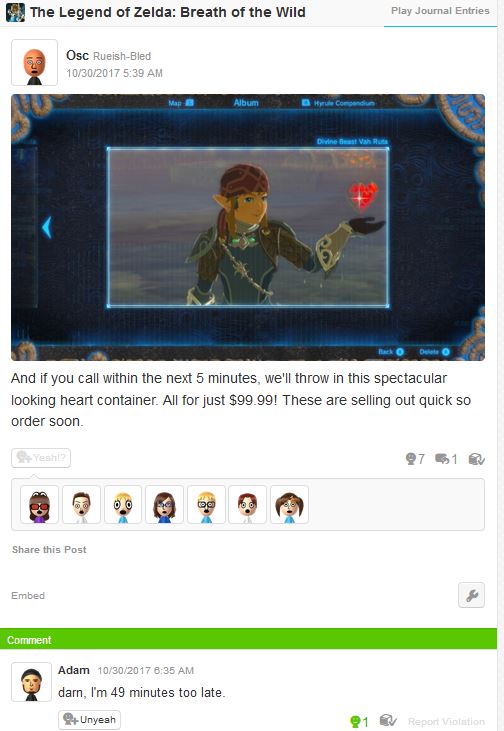