3:08 PM on 09.30.2007 (server time)    0
As some of you may recall, I was in a Mega Man boss design popularity contest a few weeks back. I posted daily threads with more boss ideas, begging for you guys to vote for me. Not once did I get flamed, and some of you even voted for me mutliple times.

So thanks in no small part to you guys, I won.

Here are pics of my cute fiance' with the prizes. 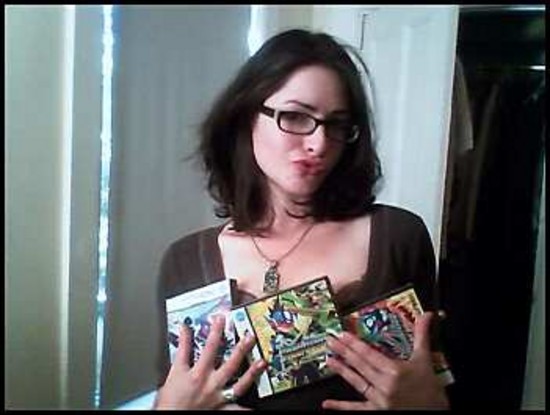 I want to re-gift the games here for a contest, but my contest attempts thus far haven't taken off. I was even think of putting a DS signed by Mega Man producer Kenji Inafune that I bought off Bahamut Zero as a prize as well, but If I were to that, I'd want the contest to be a big deal.

I want to actually make an 8-Bit Mega Man game with flash, and a way I could do that would be to make the graphics myself, but get you guys to design and program the levels. All levels would likely get used in the final game, so in that regard all invovlved would be "winners" of making a game that would likely be enjoyed around the world. But first prize of this level design contest (as voted on by Destructoid readers) would get the DS and one a copy of the new Mega Man game, second prize would get the signed T-Shirt and a copy of the game.

But I wouldn't want to do that contest if only one or two people entered. I would only sacrifice the huge awesomeness of the shirt and the DS if is were to work towards getting a full Mega Man game made. So barring that, I could just cotnest off the games in a art contest or something, but that feels far less epic.

What do you guys think?
#Community
Login to vote this up!