Muscle Princess is the only Mobile Game You Need

NOTE: It would be best if you went into this game like an uncle on Christmas Eve, raw and unexpected. I'm going to spoil some stuff. The game is $2.50 on Google Play. You'll thank me.

But if you feel you need more convincing than my solemn word, my swear, my bond, then read on. 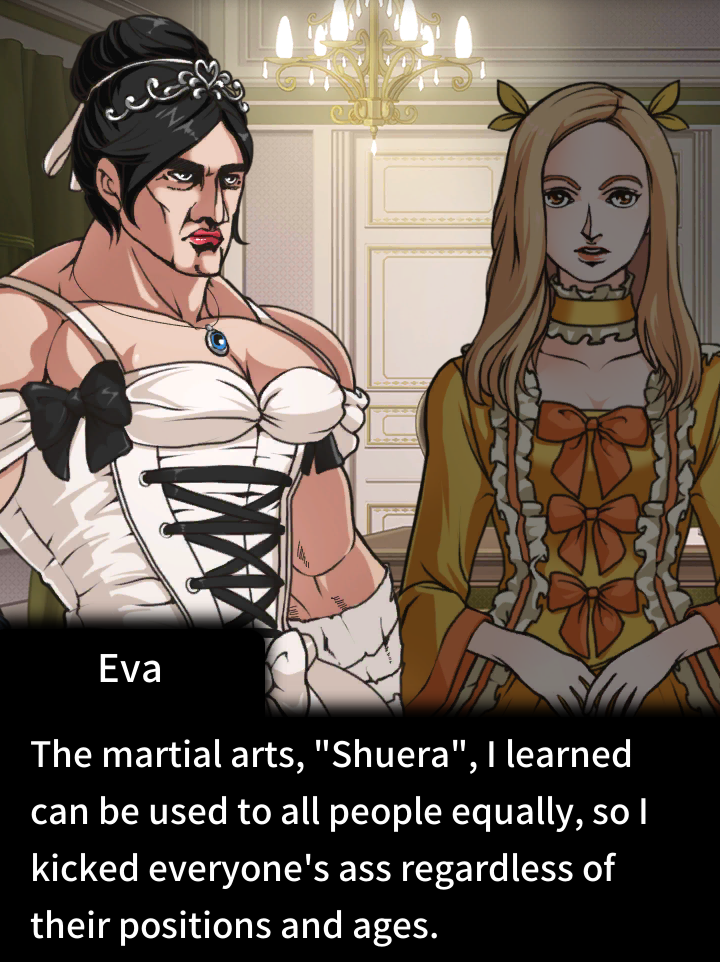 Welcome to Muscle Princess. There's been some dirty talk slung about concerning the state of mobile gaming and its microtransaction heavy economy where games that charge up front ask for too much money, but "free" games can make hundreds of dollars off single players. These methods are now moving into sixty dollar games, and so people have to start shitting on the market that originated this system. Stop doing that, you dumb fucks. Mobile gaming has given us Muscle Princess, and for that all its sins are forgiven.

Let's take a deep dive into what may very well be the best mobile game of all time.

Above, we have Princess Eva, the player character of Muscle Princess. The game is a hybrid visual novel/Punch Out-style fighter. These are two genres I'm not normally a fan of, but goddamn if this doesn't leave an impression.

The story begins with the kidnapping of Eva's husband-to-be two days before their wedding by a group of assassins known as The Assorted Raw Fish. The game's narrative quickly proves to be full of convoluted mind tricks and over-the-top characters. It's all written in a garbled translation from Korean to English that's still readable and adds this strange charm to the situations and seems to fit perfectly with the theme of a muscular princess fighting other muscular ladies to save her husband-to-be before it's too late. 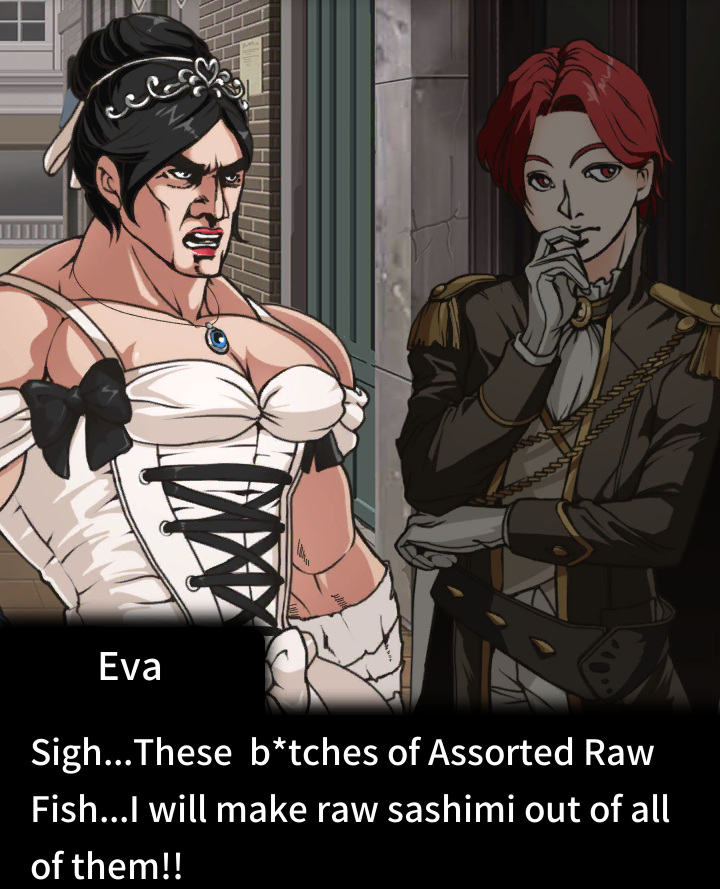 Needless to say, nothing is as it seems, and the game is replete with double-crosses and unexpected twists and turns that at times can offer far more shock and weight than should be expected from a game of this kind. I mean, this game should be a dumb mess, and yet it knows exactly what it is and leans into it beautifully, offering a ludicrous experience and yet pushing Game of Thrones style plots of conquering nations and wholesale slaughter.

This isn't even some dime-a-dozen Flash bullshit without a lick of talent or work added to the game, with each of these more harrowing moments coming complete with specific artwork to drive the drama of the scene home. 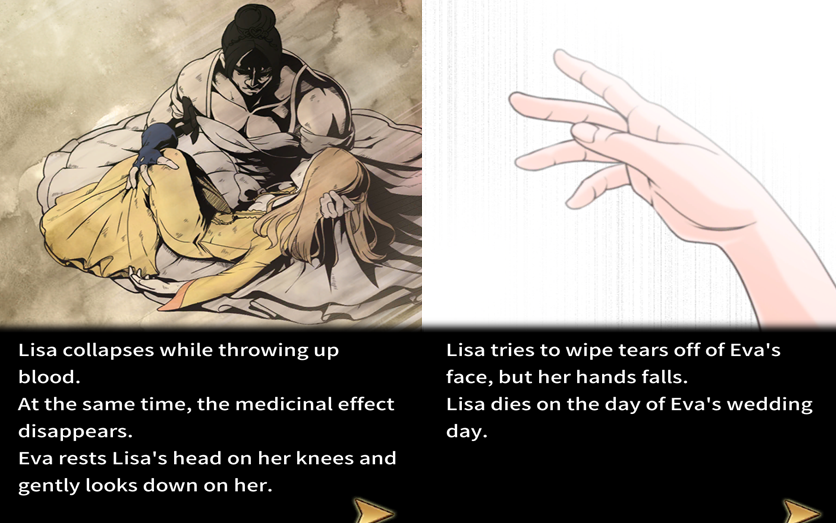 This game gets fucking real. It's also bonkers as hell, able to shift between humor and melodrama at the tap of a screen. There's nothing better, and it all works to heighten the style of the universe that Muscle Princess creates. 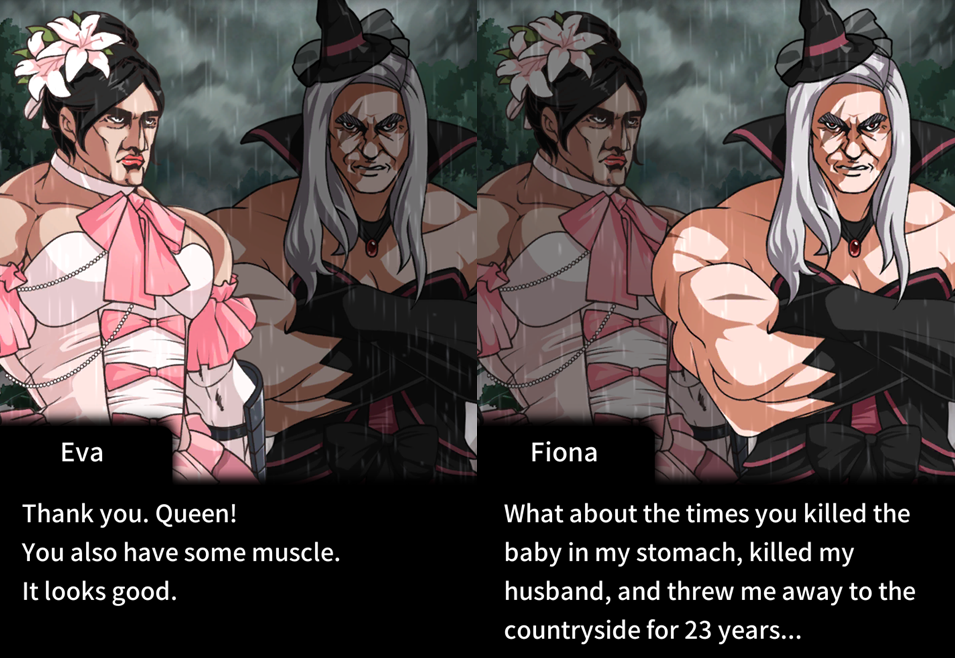 The gameplay itself is pretty straightforward. You face an enemy in the first-person, and you hit left and right to punch either side of the enemy's face. Each landed hit ups a combo meter, which makes your attacks more powerful. Then, you enter a defense phase where you need to block incoming attacks and counter them. For each counter the enemy blocks, a combo meter rises. Landing a counter punch resets the combo, but the higher it is when you do land that punch, the stronger your attack. When either you or the enemy takes enough damage, a rage meter fills, and a quick succession of buttons show on the screen for you to tap correctly and quickly enough to either land your special or block the enemy's. It's nothing earth-shattering, but there's enough depth here, and the designers find clever ways to make each encounter feel fresh and engaging. 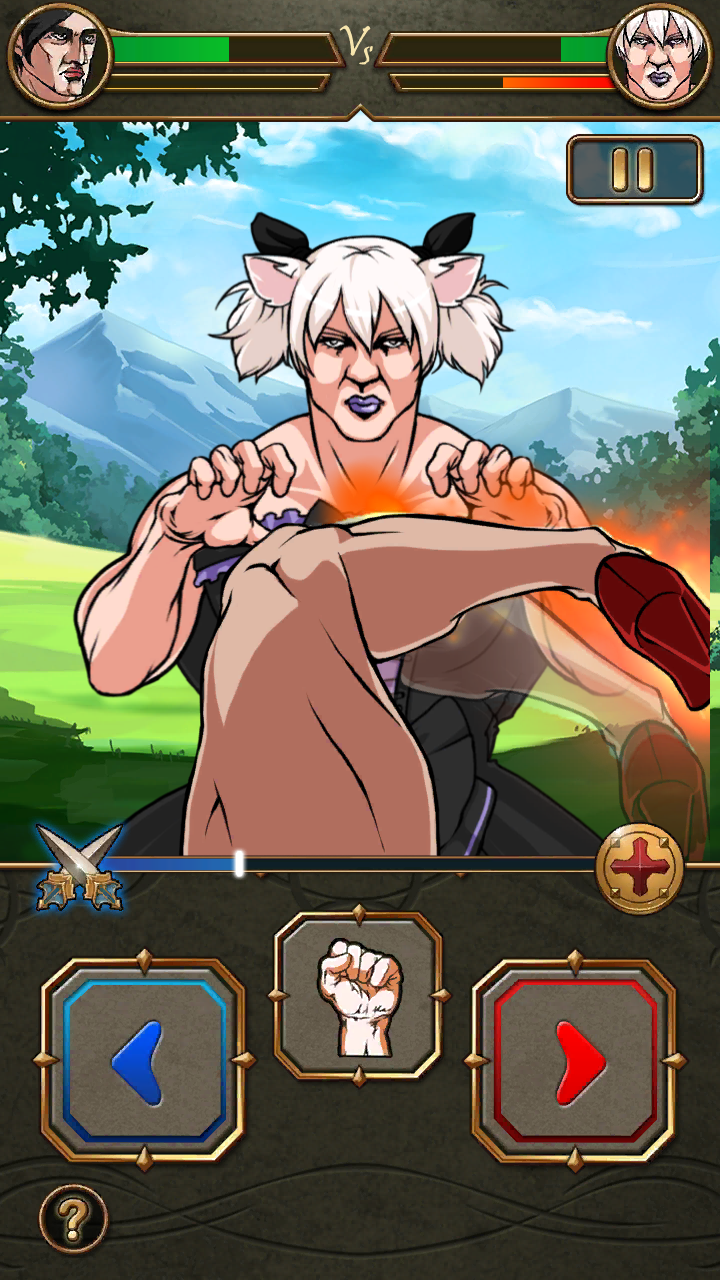 Enemies have ticks that show which side of their faces you should punch to land a blow, and they have ticks to show you which direction their attacks will come from to block, and it's noticing these and reacting that's key to success. Every boss is different in some interesting way, even using color-coded attacks to match the colors of the left and right attack buttons. It can be thrilling, especially against later bosses who block most counter hits and raise your combo to thirteen or fourteen, before you land a very satisfying fiery fist right into their fucking faces. It feels really good.

When you do execute a special move, Eva will throw a barrage of kicks into the enemy that will end in an explosion. It's not super satisfying and feels kind of cheesy, but don't worry. They fix that in the sequel.

Oh, did I mention there are two of these games?

Yeah, and Muscle Princess 2 improves on the original in every way (except with the translation, thank god) and creates an even more gripping and exciting experience than the first.

Most notably, this one is fucking uncensored. 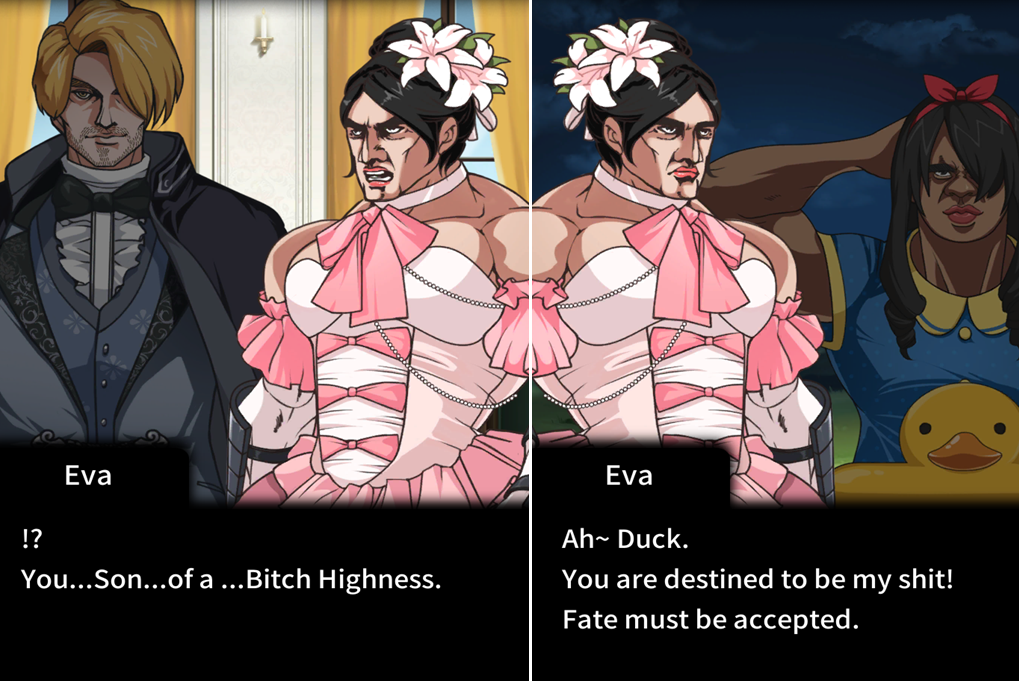 It also improves the combat system in a lot of key ways, doing away with the special bar, and instead adding a sort of dizziness gage that fills with each additional attack in a combo and shrinks with each successful block. When full, either Eva or the enemy will get to launch a special attack.

And like I mentioned, Eva's is much better this time. How much better?

In this one, she gets a Kamehameha.

If that doesn't sell this game, then I don't know what will. It's badass. It's insane. And here's a note about just how much detail they put into this batshit crazy game: There's one small section later in the game where Eva's hair is down. You only fight one enemy at this time, but they remade this animation featuring a version of Eva with her hair down just to stay consistent. That's effort and dedication that often doesn't belong in games like these. People throw around the phrase "better than it has any right to be" on a lot of shit these days, but I can't think of a piece of art more worthy of that distinction. This game should be a silly one-note joke, and yet it's a thrilling work that constantly surprised, amused, and shocked me. It's the Deadly Premonition of mobile games. It's a gem only made more lustrous because of its rough edges. Love and dedication went into this game. And it shows. It really shows.

Also, there's a bunny girl in it, for the degenerate furry trash filth among you. 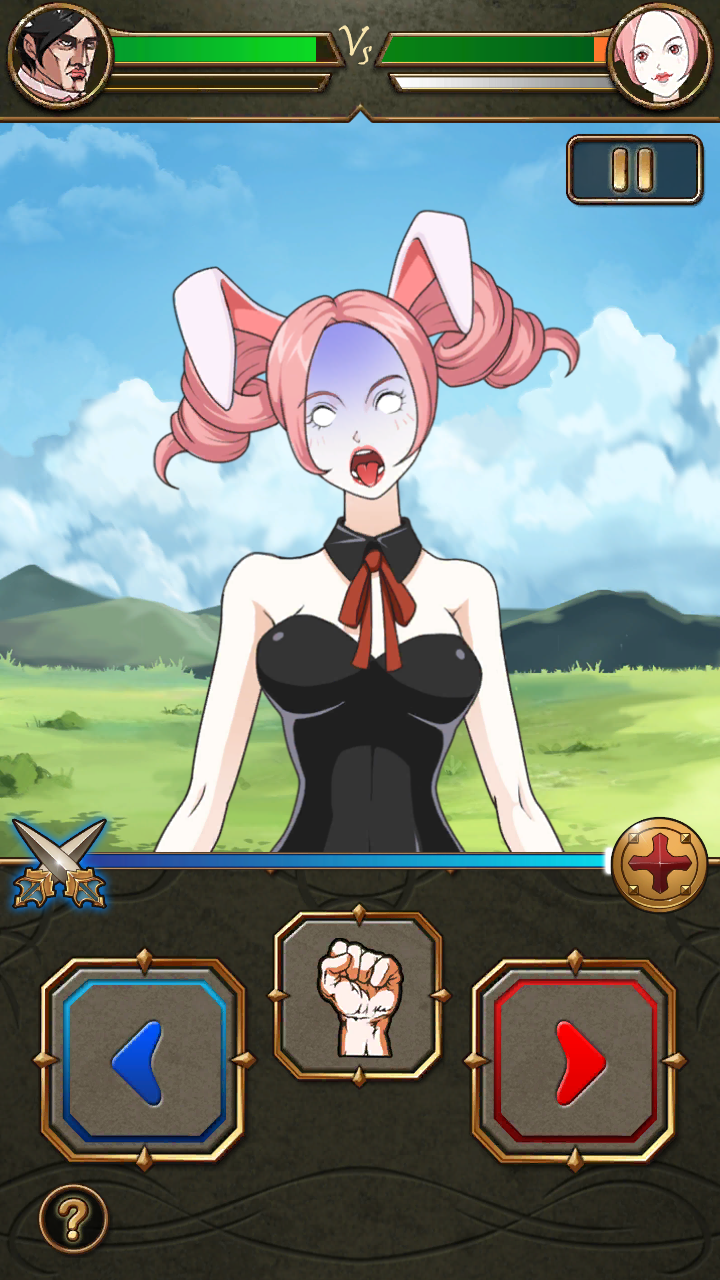 The only negative note I can offer is that Muscle Princess isn't finished, yet. Part two ends on a cliffhanger, on the brink of war with a tenuous alliance, much death, and even more to come. It's a troubling bit of emptiness. Thankfully, however the developer has informed me that the final part of this trilogy is currently being translated and will be out in mid-November.

So, now's your time. Dive in and enjoy this slice of mobile gaming that should be the norm rather than a rare and unpopular exception to the rule. Catch up on the story, immerse yourself in the gameplay, and prepare for the dramatic conclusion soon to come.

All I can say to whatever Craigslist translator promised them that the game could be translated into perfect English in two weeks is, "Godspeed, you wonderful son of a bitch. You're doing the lord's work, now."

Until that day, I will continue to eagerly await the conclusion to the very best game mobile gaming could ever hope to birth. 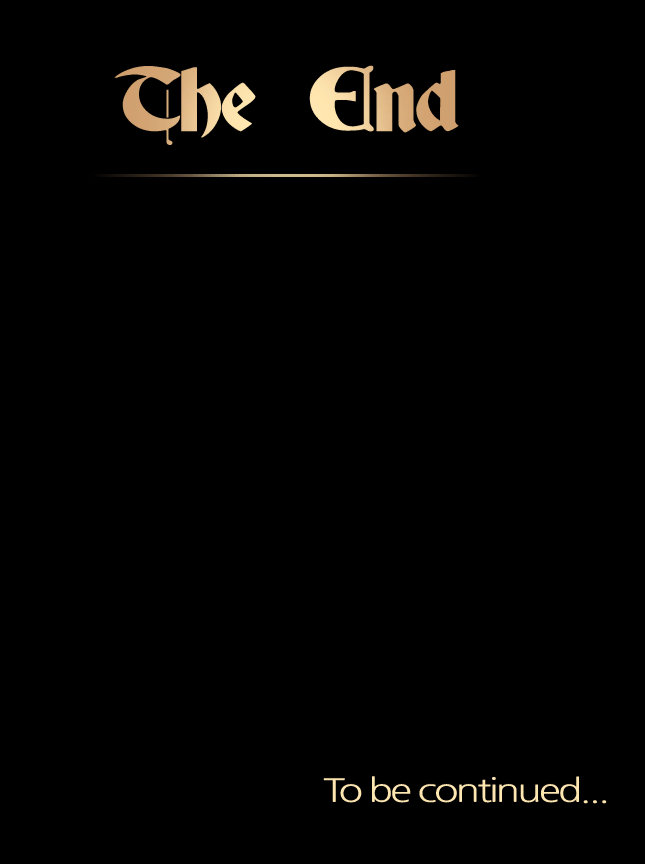