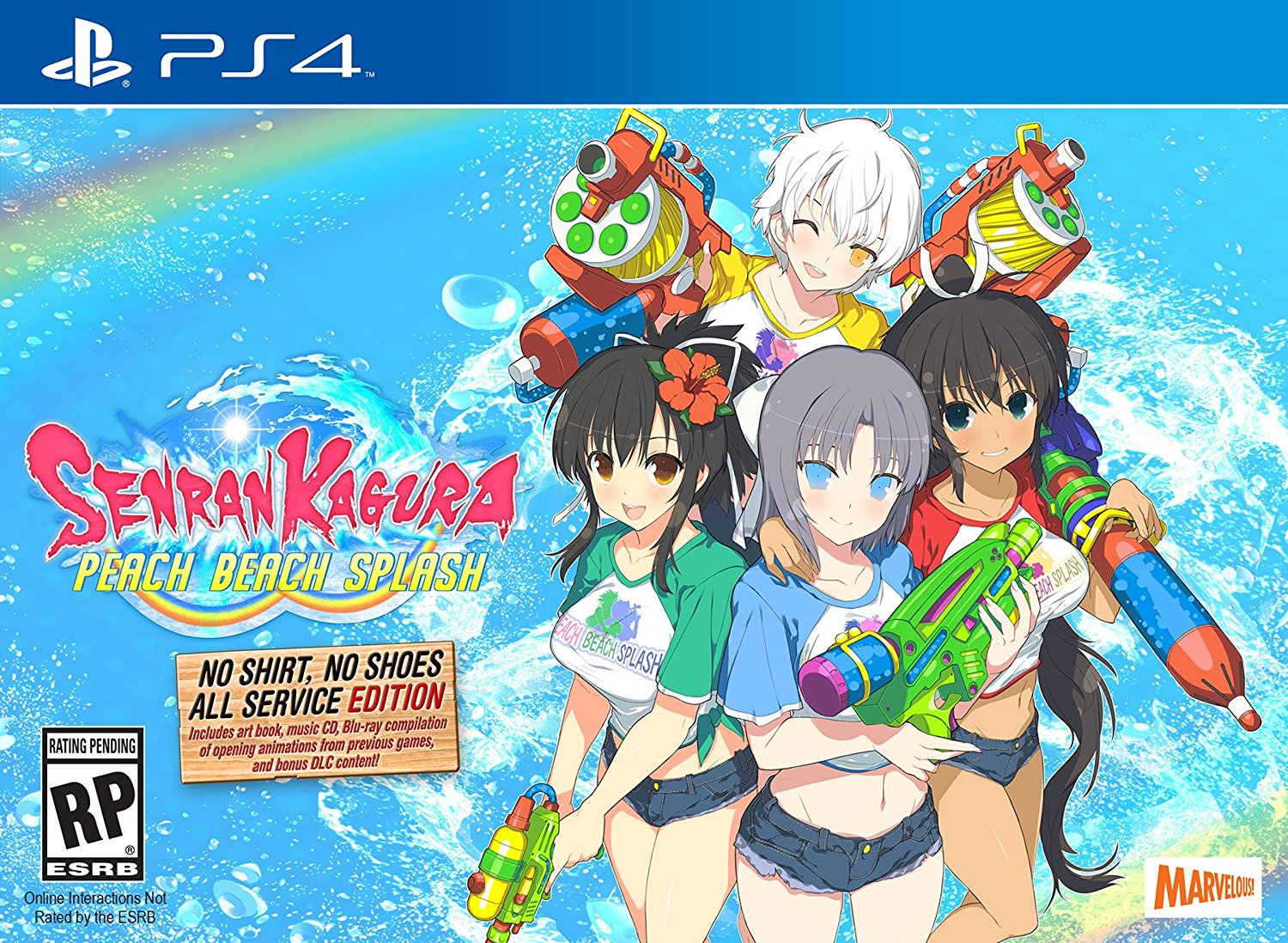 Over the course of my 27 years, I've put a lot of time into competitive shooters with probably over 200 hours each in Quake 2, Tribes, Battlefield 1942, the original Call of Duty, S4 League, Splatoon and Player Unknown's Battlegrounds. Whenever I stumble across something that feels new and fresh is generally when I'll invest at least a couple of months of time into it.

So I am a little disappointed that it seems like even if I wanted to dump loads of time into Senran Kagura: Peach Beach Splash, it seems the playerbase won't be around long enough to do so. It's a game that surprisingly has great mechanics and pacing that I haven't seen in other shooters, but, even a month after launch, it can be difficult to find a match. 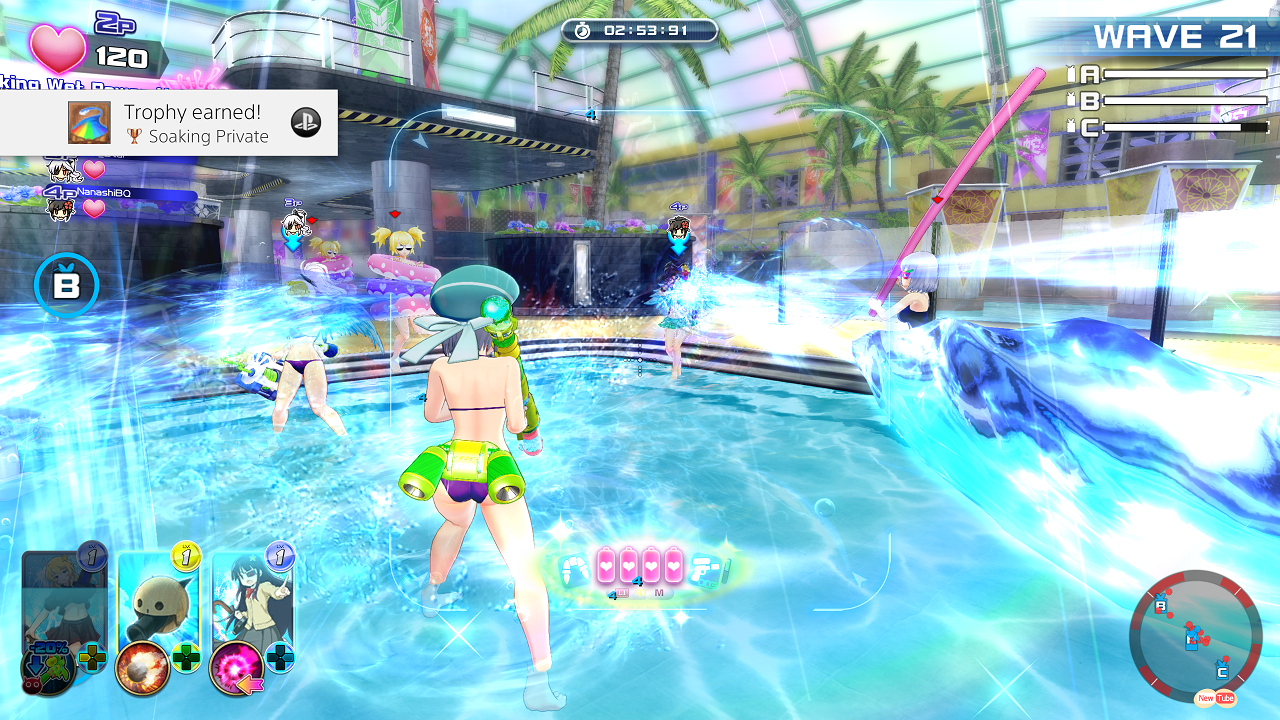 Despite its bright and colorful style, water-gun theme and liquid-based bullets, Peach Beach Splash plays nothing like Splatoon, or even most shooters. It's a game that tips the scale from precision to momentum. While you can manually aim, the speed at which both you and your opponents are moving makes lining up shots impossible. Instead, the default control is an automatic lock-on that covers the majority of the screen.

Coming within range of an opponent and firing will lock the aiming reticule until the player stops firing. Instead the skill comes down to positioning, as the bullet speed is comparatively slower than other shooters. Finding angles to maximize the number of shots that hit becomes the core of the game. The addition of each character being equipped with jet packs opens up numerous movement options. 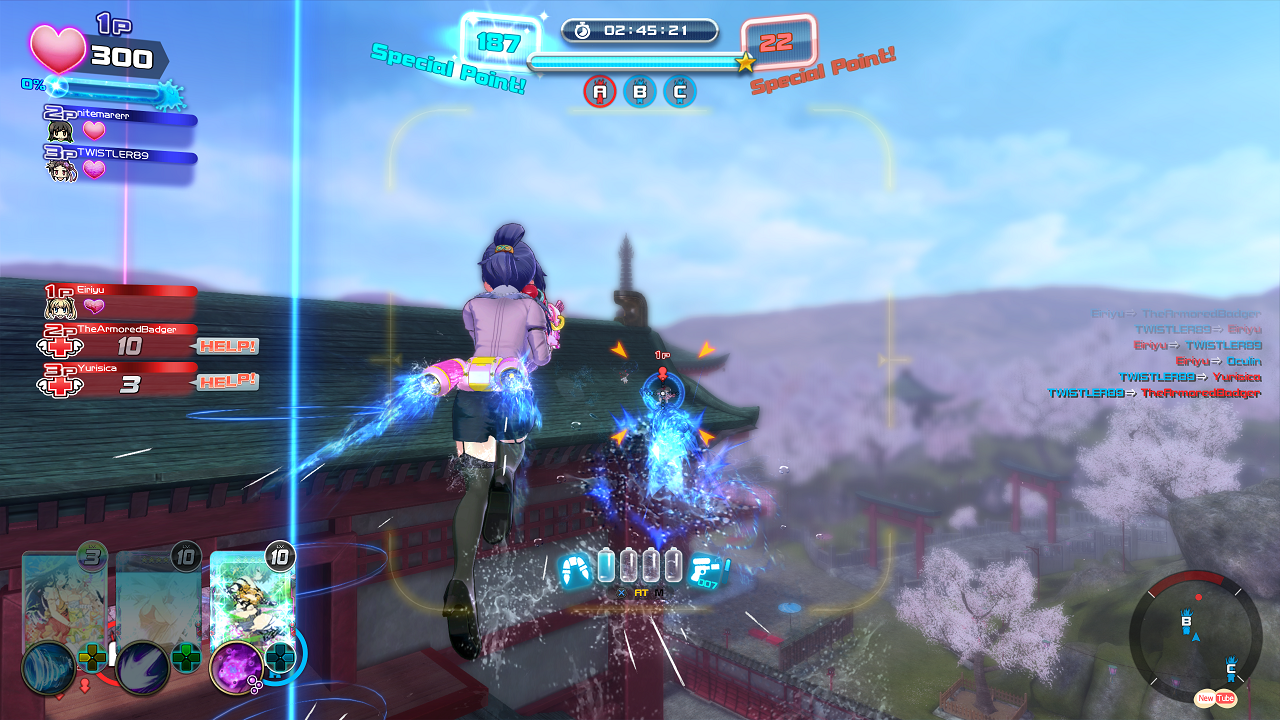 Players can boost around on the ground and, depending on the weapon, fly or do short hops around the stage. It's a handy tool for traversing the environment and quick escapes, but it can also be used to gain a positional advantage... though at a cost. The jet pack consumes water which doubles as your ammunition. Once you run out, you have to pump your gun to refill. Without it, you're largely defenseless.

While water is the core resource, each player also has a hand of three cards at a time that can be composed of various pets, abilities, buffs and debuffs. There's a significant number of cards as well variable versions of individual skills. They can do more damage, have shorter cool downs or different attack patterns, such as an electric ball type that can fire straight forward or bounce around.

It's chaotic and can often be visual overload as players are flying about, raining water onto each other and launching skills non-stop.

Confined areas, such as halls or some of the indoor levels, are really counter intuitive to the game's design. For a play style that's all about moving, being trapped and unable to appropriately use skills is often more frustrating than anything. A wave of water and skill attacks can completely overwhelm you with no real solution beyond launching your own wave back and hoping your team comes out as the victor. Open-air levels are really where Peach Beach Splash shines.

Standard Team Deathmatch, a spoof on capture the flag called Capture the Bra, and a Queen of the Hill mode are all here. The best game type is Squirmy Showdown, an altered version of Team Deathmatch. It requires players not only to knock out each other, but also perform a Squirmy Finish where you spray a downed opponent using a rubber ducky. If the player doesn't do so in ten seconds, no one scores. This creates a constant shift in the pace of combat. 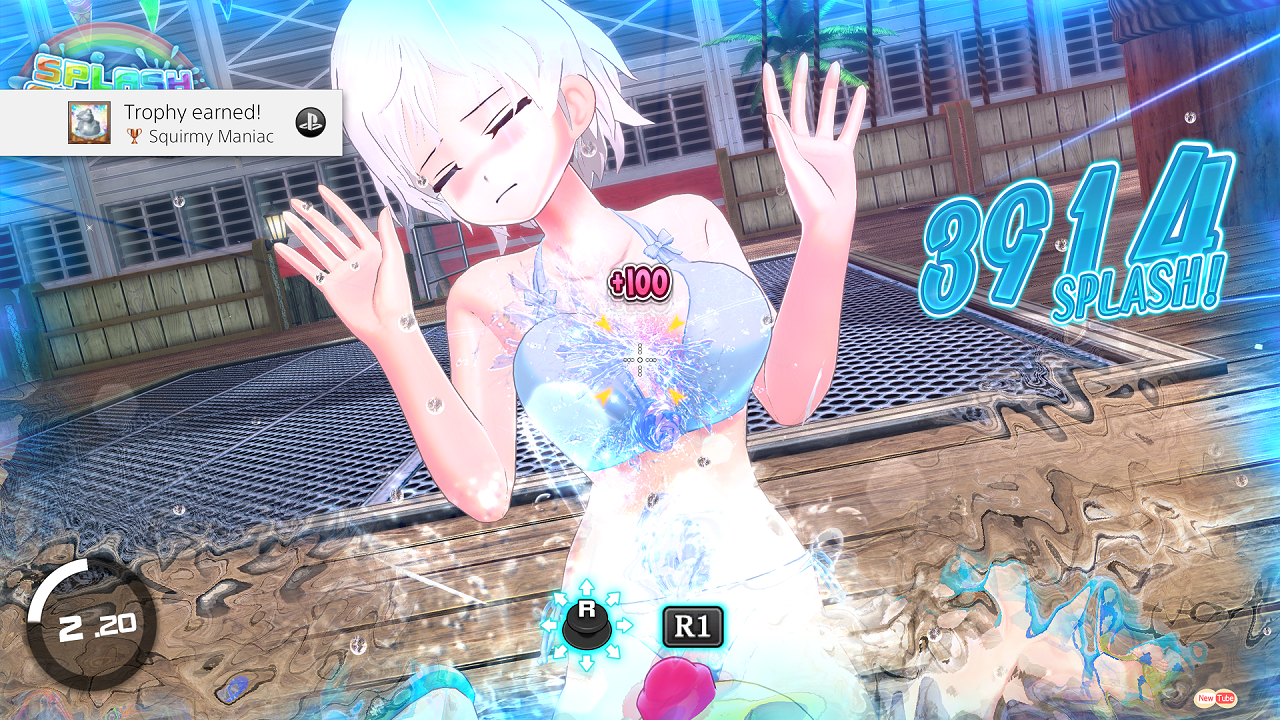 What ultimately happens is that the team with the knocked out member scrambles to protect and revive their fallen ally, where the opposing side tries to dash in and get the squirmy finish for the point. This actually works well with another element of the game, where players will get knocked back when they are reduced to half of their health. Initially this is a benefit due to temporarily disabling and often disorienting them. Yet, when they recover, they come back with a shield and can't be damaged until a certain amount of time has passed.

It becomes a ridiculous push and pull of trying keep distance while opponents are defended by their shields, getting in close to get the squirmy finish, as well going on the offensive when shielded or equipped with a powerful set of skills. The jet pack's flexibility and speed helps with exploiting openings as well as quick retreats from bad situations. 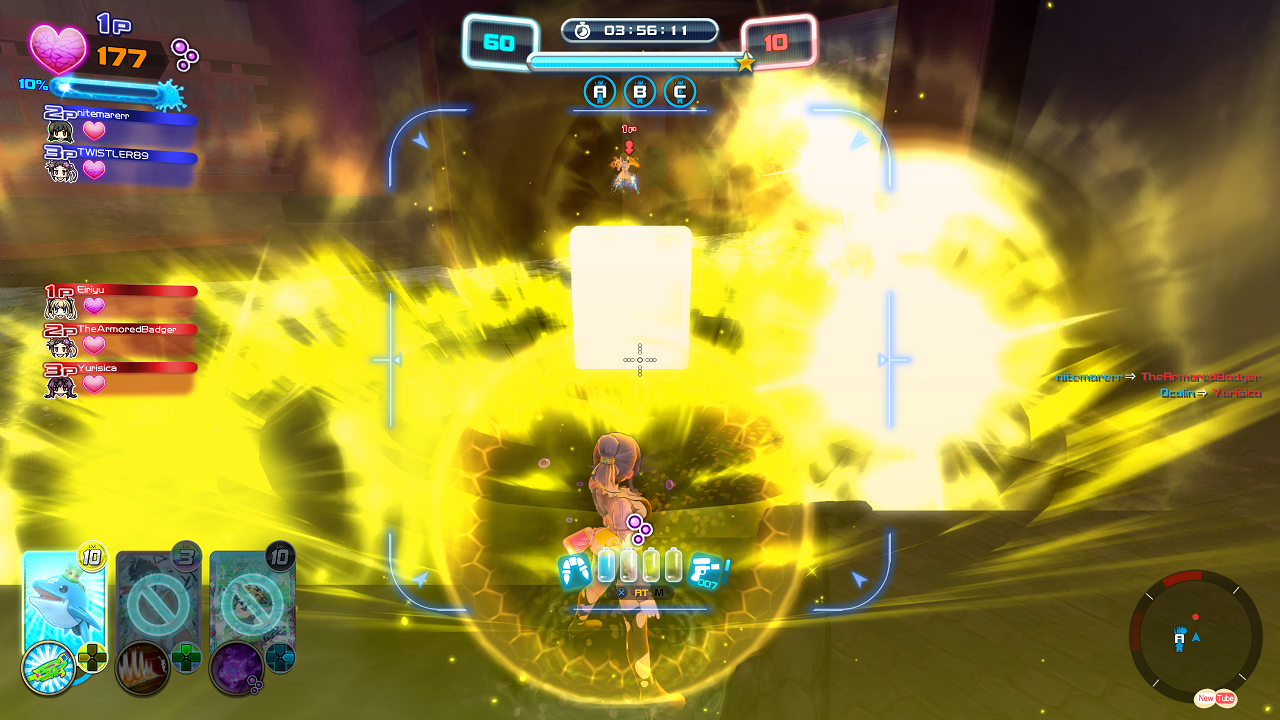 I love this balance and ultimately it's what keeps me coming back and sitting in lobbies for often 5,10 or 20 minutes to find a match. Although, I've definitely had times where I can search for over an hour and find nothing. I'm not sure if the Senran Kagura name and the fan-service helps or hurts the playerbase, It is is probably the least of its problems. though. Starting players are put at a huge disadvantage.

Everything from characters, weapons and skill cards need to be leveled up. If you start and jump right into a competitive mode, you'll stand no chance against kitted out opponents. Even if you want to play online, it's incredibly discouraging and a burden on your team.

High difficulty AI bot matches or the cooperative survival mode seem like the main source of grinding levels early on. While the story content does provide experience and money, it's at a fairly slow rate. The matches are often overly dull and consist almost entirely of destroying waves of grunts and AI bots. 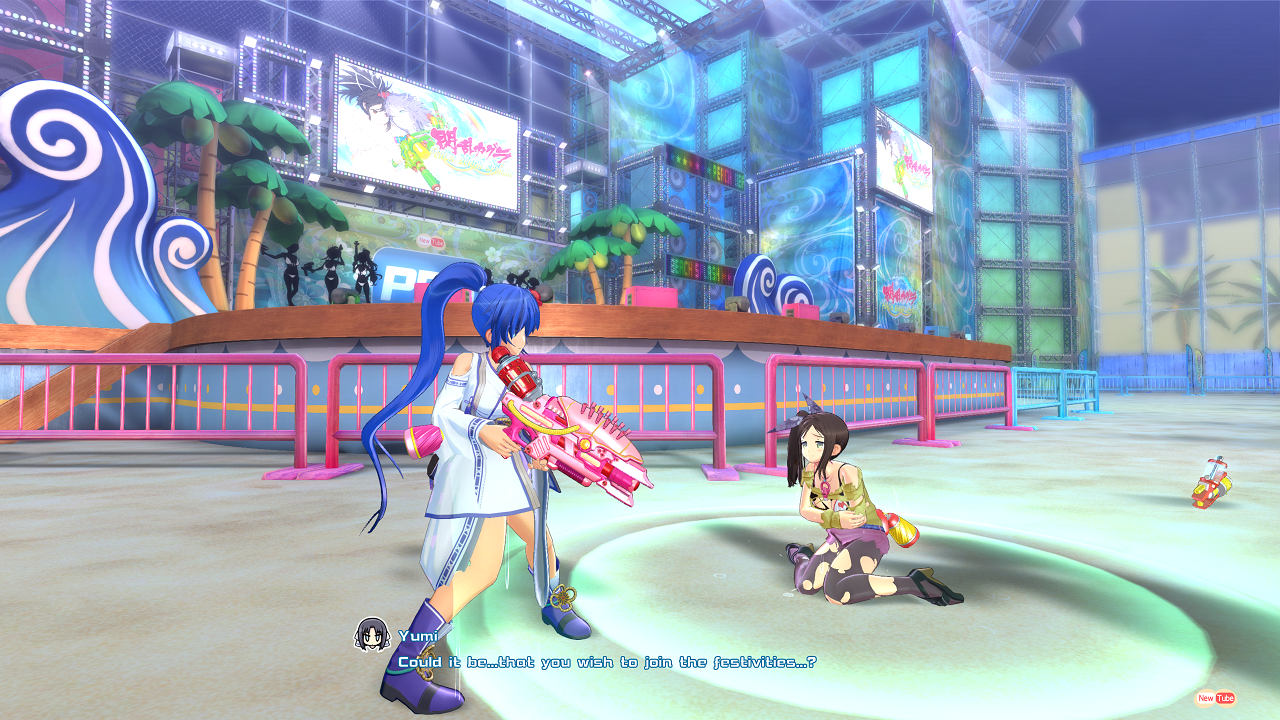 The story is dialog heavy – for better or for worse. Admittedly, I'm oblivious to the plot of Senran Kagura. As a spin-off, Peach Beach Splash is largely frivolous and feels like it's trying to find excuses to pit characters against each other. Since there are so many characters, it's easy to find at least a few you like. It's tickled my interest of what other stories surround some them, especially the rag-tag Crimson Squad.

While there is that wall to become competitive, the leveling system is quite addictive. Everything is represented by a card. Opening packs distributes new cards as well as duplicates. The duplicates are then recycled into a pool of experience points that can be used to level up other cards. It's an incredibly simple and almost entirely automatic process, but is also surprisingly satisfying. At times, I was often more happy to get a high level duplicate for experience rather than a new skill to add to my deck. If you do want to collect though, there's a ton of variants cards with their own art. 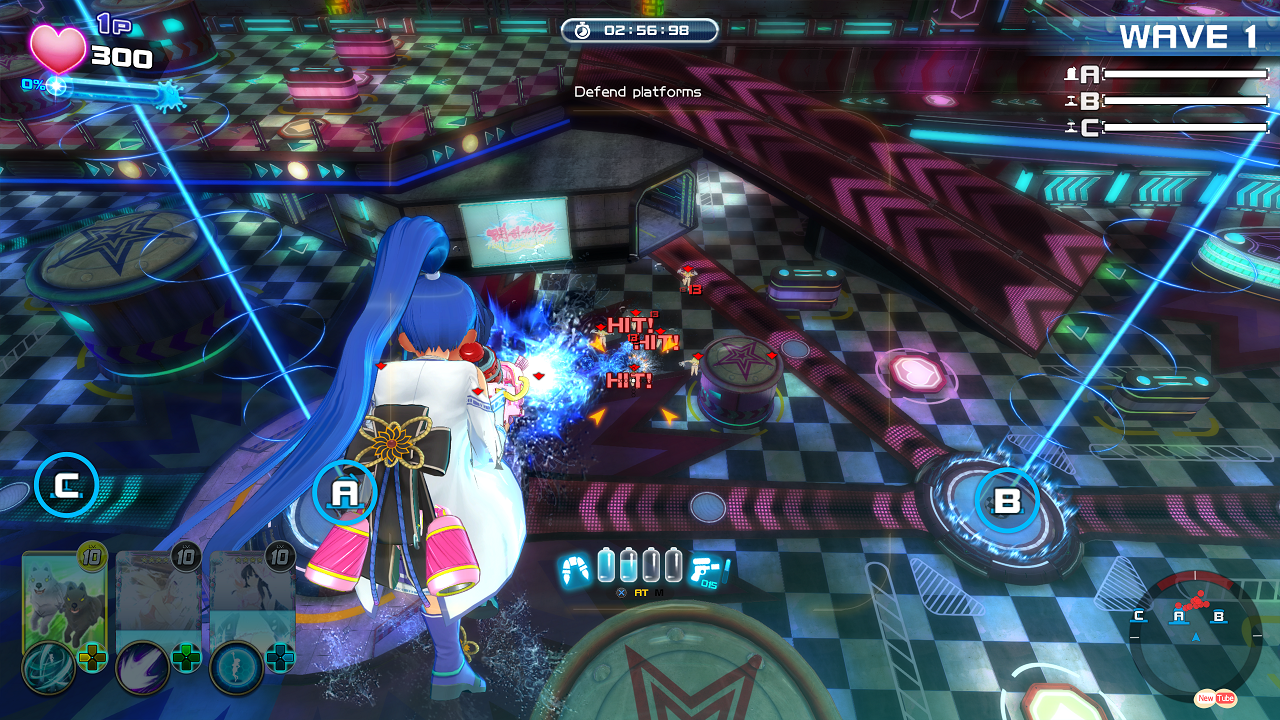 I'm not really a fan of Senran Kagura's character art, although I appreciate just how sharp and colorful Peach Beach Splash is. It's nothing technically impressive. Nevertheless, there's a lot of visual variety in the stage design between areas like a pastel colored stadium, a snowy castle and a neon pinball table. No one stage feels the same and each their own peppy musical theme. There are diverse dress up options to customize characters, although more color customization would be nice.

Ultimately, I don't think any of the above really matters though unless a playerbase is still around. There's definitely stuff to do in single-player, it's just not really where the fun comes from unless you're just here to see the misadventures of the shinobi squads.

I would love for more to join in, if only so I could play Peach Beach Splash longer. But for a game that may be a ghost town in another month's time, it's incredibly difficult to recommend picking up.