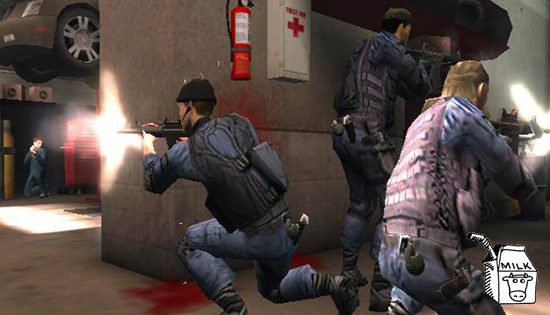 The game also offers online co-op for up to four players, which is a lot of fun - provided you can find someone else playing. Most tend to stick to the Team Survival gametype, and will generally only play on the same 2-3 maps. There's not a lot of imagination in the RS3 online community, apparently. Like most online gaming communities, over time their numbers diminish and they become set in their ways. For what it is, though, there's still some entertainment to be found with the game on XBL.

I like Rainbow Six 3, for the most part. I don't really have the patience to become better-acquainted with it, though. Frankly, this game just makes me want a 360 to play Rainbow Six Vegas on. Still, this game has a number of positives and it doesn't completely befuddle my dumb cracker mind with its tactics and bang-you're-dead urgency. It's certainly worth a rental, or even a cheap purchase. Unless you have Vegas, in which case this isn't at all necessary. I envy you and hate you.

Incidentally, if you're wondering how I solved my problem with the clingy wife in the escort mission (wow, that sounds dirty), and I'm sure you weren't, I'll tell you: I shut her in the bathroom with my squadmate, then finished the level alone, with God Mode on. Zero tolerance for escort missions. Zero. How I roll.

Previous Out-of-Date Games:
01 Medal of Honor: Frontline
#Community
Login to vote this up!