We actually don't know all that much about the new Spider-Man game from Insomniac other than the fact that it is NOT a movie tie-in game. Which is great! This way we aren't scratching our heads saying, "How does this fit in the MCU timeline?" Homecoming gave some of us enough of that already. But from what we have seen in the microscopic amount of footage Sony has graced us with and statements from the developers, this is a Spider-Man that has been Spider-manning around for a good while now. So this begs the question, "What has he been up to before the game's start?" Trying to answer these questions with the little information given about the characters and situations we see in the trailer I have a noticed a few things that seem to draw heavily from the Amazing Spider-Man movie tie-in games' plot points.

The Kingpin Is Behind Bars (Finally) 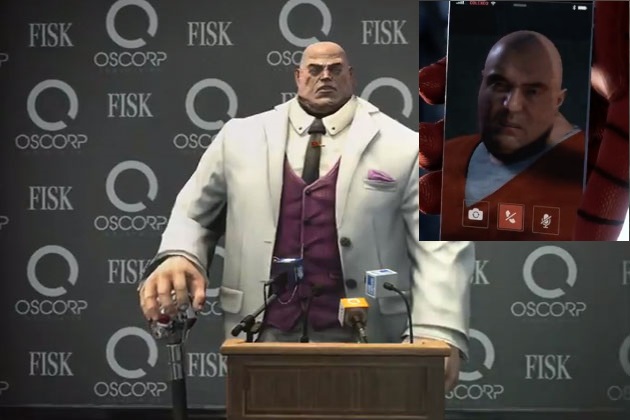 He looks a bit different. Maybe some weight loss from lack of access to cake and icecream in prison?

In the very first glimpse of gameplay released for the game we see Spider-Man facetimeing an incarcerated Wilson Fisk AKA The Kingpin. If you can recall, trying to expose Wilson Fisk as The Kingpin of crime was a major plot point of The Amazing Spider-Man 2. The game ends shortly after you are distracted from obtaining hard evidence of his illegal activities from his computer by a rampaging Electro. In a post credits scene he says, "The real work begins." So obviously this leaves Peter with some serious Spider-Manning to do. Said Spider-Manning is clearly what puts Fisk behind bars in this new game.

Writing from Mr. Negative in the first The Amazing Spider-Man game and his appearance in Marvel's Spider-Man

Mr. Negative is mentiond in both Amazing Spider-Man games. In the first game you undergo photo investigation missions given to you by Whitney Chang. In one particular mission that takes place in front of a food shelter (sound familiar?). You must take a photo of a "negatively" charged payphone and bench with writing near it that says, "I was never born so I am ever living!" The news article at the end of the report states, "the public have agreed on one name for the mysterious figure: Mr. Negative." After seeing this, I was personally hoping for an appearance from Negative himself in the future but of course, this didn't happen.

In the second game he is mentioned, not once but twice in two different photo missions Peter does for Whitney Chang. Audio evidence from detective Jean Dewolff's research on criminal activity says, "Mr. Negative controls chinatown, we've got plenty of eye witnesses to his crimes. We could convict him easilly... If we could ever find him. His weird appearance and incredible strength clearly show superhuman power... and make him hard to ID. He's like a negative image on a photograph, his face is always in shadow. I don't know what kind of energy he controls, but we need to find a way to stop it." After this I was thinking, "Oh wow, another Mr. negative mention, This can't be a coincidence. He's definitely showing up later. Sadly i was mistaken. But in a later photo mission he is mentioned again in another audio log that says, "Negative's men show an unusual level of loyalty. It might just be that he pays them well, and he can charge up their weapons with negative energy to make them extra effective. But I'm starting to think Mr. Negative actually has some kind of mental control over his people. If that's true, and we can find a way to break it, that'll be our key to prosecuting him." needless to say, we never actually got to see Mr. Negative in the flesh. But there was anticipation of a sequel and in that, expectation of a third game in which we would finally confront him and tie up our loose ends with The Kingpin. This hope was dashed to pieces in a bitter-sweet moment when Sony decided to partner up with Marvel/Disney for yet another reboot. So any chances of us catching up to The Kingpin and finally confronting Mr. Negative were gone. Untill now...

As far as I can tell, Insomniac has clearly taken some inspiration from the last two games. Which isn't crazy considering most Spider-Man titles share bosses/villains but these games are the only ones to mention Kingpin and Mr. Negative both. It's like their continuing on but without all of the movie non-sense to bog it down. I know this isn't the case. Mainly because Norman Osborn is alive and well and that would be ludicrous if they did. This seems at lot like how The Amazing Spider-Man 2 film hinted at the Vulture and in Homecoming we actually got the Vulture as the main villain, but even more direct. This could be the result of the people at Sony not wanting these story elements to go to waste. Maybe Insomniac was just inspiried by the last game. But remember they have stated that Mr. Negative is just one of many villains that will be appearing in the game. Most likely they are just throwing in tons of characters in an effort to give Spidey's world a more established feel. Who knows.

I'm almost starting to think this project started out as another tie-in game and then when the movie was cancelled the game was too, but with some work already done on it. Then when Sony decides another Spider-Man game needs to be made, they let Insomniac pick up where Beenox left off. This is an insane theory of course but if I'm right, that means we'll be seeing other never-before-seen (in a videogame at least) villains that the two games had been hinting at like Hydro Man, Man-Wolf and some we have seen before like Sandman, The Vulture, and Rhino. Only time will tell. I just know that I'm always ready for more Spider-Man.